All The Rookies You’ll Need 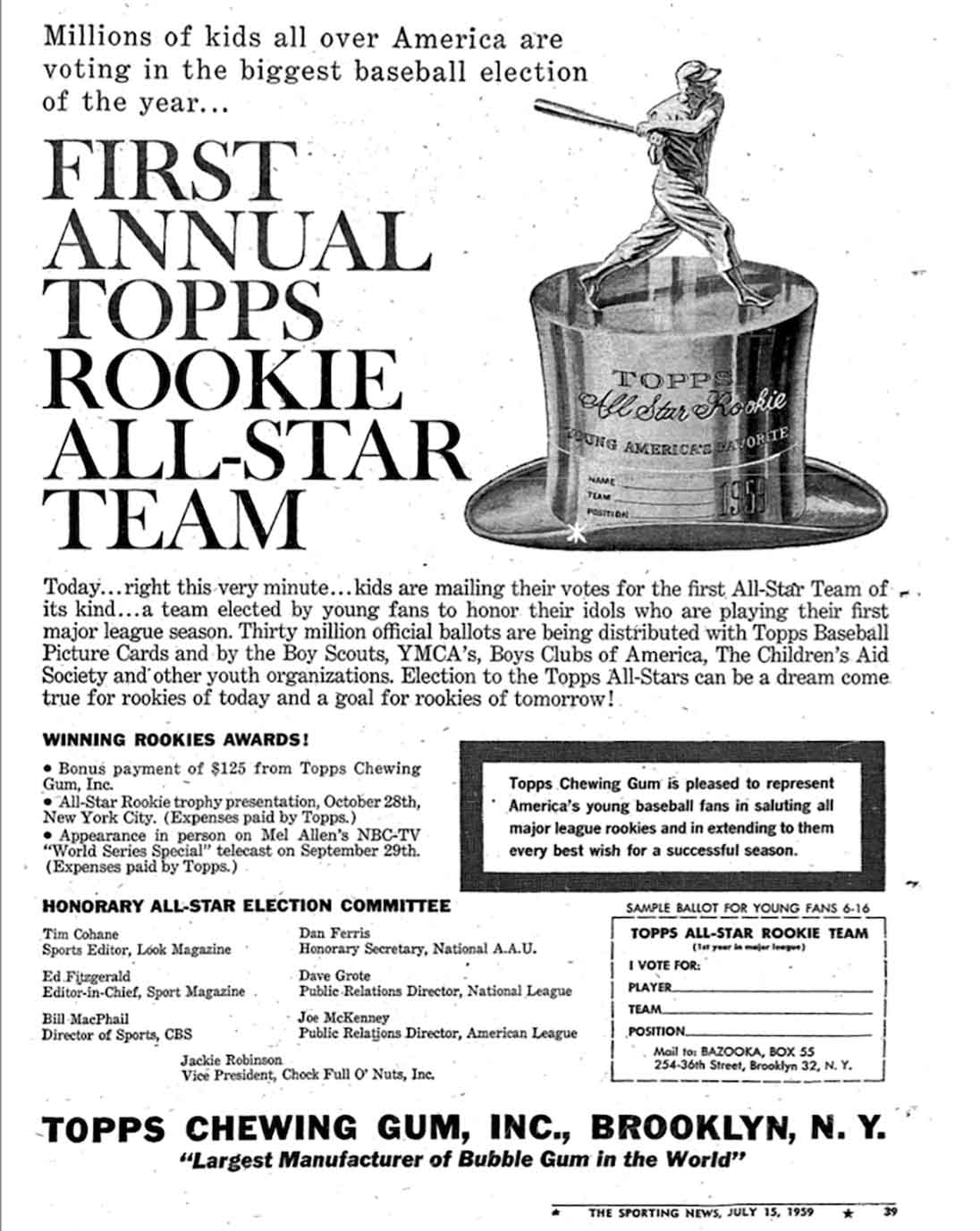 On July 15, 1959, Topps Chewing Gum, Inc. ran a full page advertisement in The Sporting News. “Today… right this very minute… kids are mailing their votes for the first All-Star Team of its kind… a team elected by young fans to honor their idols who are playing their first season.”

30 million ballots were distributed with Topps Baseball Picture Cards and through the Boy Scouts, YMCA, Boys Clubs of America,

The Children’s Aid Society and other youth organisations. Over 1.5 million votes were cast.

Three months later, on October 28, 1959, the first Topps Rookie All-Star team was announced at a lavish banquet at the Hotel Manhattan in New York.

Eight position players and two pitchers were elected to the team:

The following year, Topps honored these players by creating a special design for their cards within the 1960 Topps set.

The landscape design features a color photo on the left, and on the right is a brightly colored oval set atop a vibrant background.

Inside the oval, under the phrase ‘Selected by the Youth of America’ is the player’s name, team and Topps Rookie All-Star position. Underneath the oval is the image of a gold trophy, with a batter perched on top of a giant top hat.

However this is the only year where the award recipients’ cards differ significantly from the regular issue cards within a Topps set.

Now I say for the most part here because there were several instances where Topps mistakenly didn’t print the image of the gold trophy or cup on a player’s card the following year:

Ouch. You can’t help but feel bad for these guys. As well as the entire 1973 Rookie All-Star team, who didn’t have the gold cup printed on their cards the following year, simply because Topps decided not to do so.

And it wouldn’t be the only time Topps would make that decision either. In fact, after it reappeared in 1975 and remained for several years, Topps once again made the decision to leave the gold cup off award recipients’ cards, between 1979-1986.

Finally, in 1987 the gold cup was brought back once and for all, and has remained on players’ cards to this day. The gold trophy has also made a reappearance in recent years, appearing on players’ cards in the Topps Heritage sets. 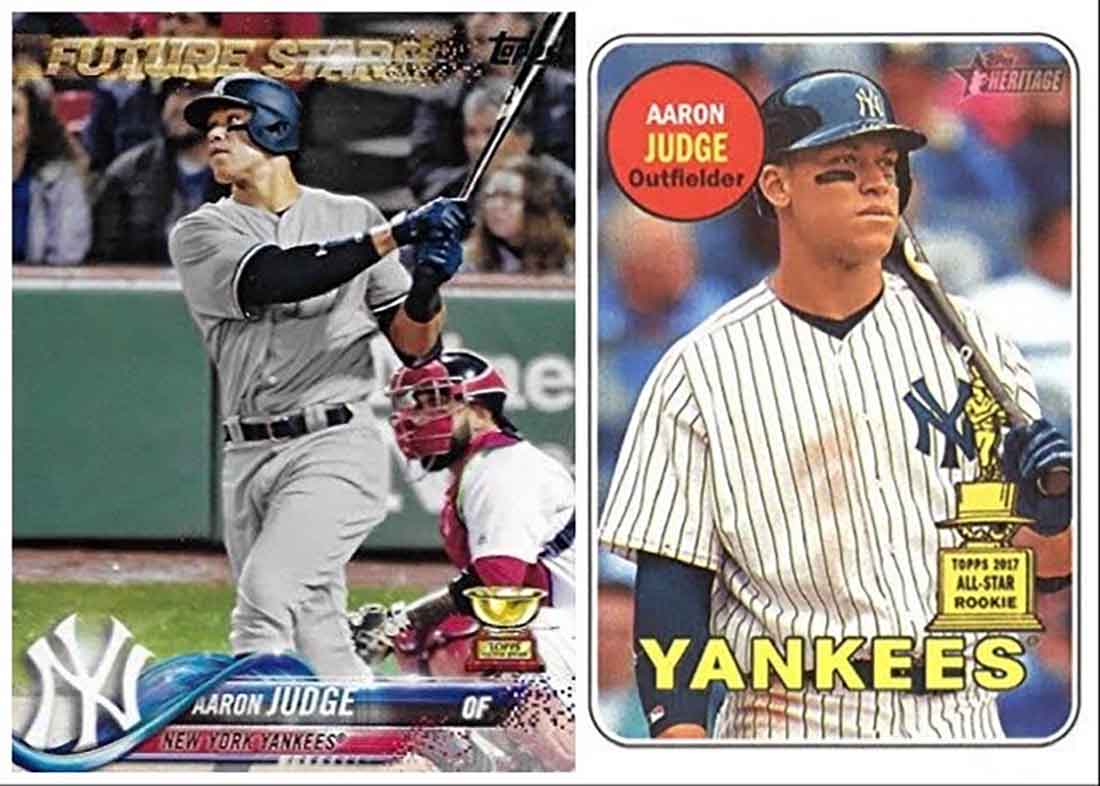 From 1959 to the mid-2000s Topps honored their Rookie All-Star teams with a banquet. The players and members of the election committee were featured in a program that was given to all guests in attendance.

Except for 1964. That year, Topps didn’t provide their guests with a program, opting instead to present them with one of the rarest card sets in existence today: The 1964 Topps Rookie All-Star Banquet Set.

It is estimated that fewer than 300 of these sets were produced. The 36-card set, presented in a colored foil sleeve with a large ‘6’ on the front, is seldom seen in the collectors’ market. Single cards do appear on eBay from time to time, but complete sets are rare, and usually only sell at higher profile auctions. 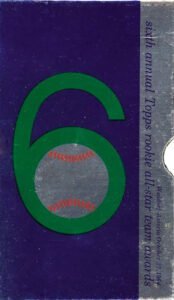 Each card within the set measures 3 inches x 5 ¼ inches, and has a page number on the lower right corner. The cards, with the exception of the first one, are printed in black and white, with blue or red highlights. The set reads like a program, beginning a couple of descriptive cards entitled ‘The Baseball World Votes’. These are followed by cards highlighting members of the ‘Topps Rookie All-Star Team Honorary Election Committee’, which included Jackie Robinson and Al Silverman.

Cards #8-12 feature the former Topps Rookie All-Star teams from 1959 through 1963, using a composite of ‘floating heads’ against a light blue background. Cards #13-34A highlight each of the 1964 winners, with each player being represented by two cards – the first card written by the Public Relations Director of their club, highlighting their many achievements, and the second card featuring their photo, bio and minor and major league records.

Card #35 closes the set out with the Rookie All-Star trophy. 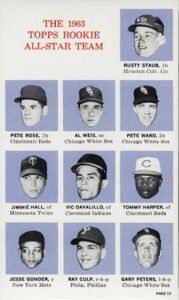 The card features Pete Rose at the start of his remarkable major league career, and given the limited number produced, is therefore highly sort after by collectors.

But another noteworthy card from the set is card 34A, attributed to the Minor League Player of the Year, Luis Tiant. Tiant, a captivating right-handed pitcher from Cuba, had a remarkable year in 1964.

Playing for the Portland Beavers of the Pacific Coast League before being called up to Cleveland in July, he compiled an impressive 15-1 record with a 2.04 ERA in 137 innings. He also completed 13 of his 15 starts. 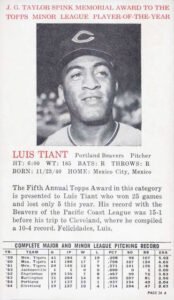 Tiant made his major league debut on July 18, 1964 against Whitey Ford and the New York Yankees, pitching a four-hit shutout and striking out 11.

previous article
Monkey Business
next article
“You Can Kiss My Ass,” Todd Stottlemyre