“Only somebody as goofy as Johnstone would try it. He was probably bored and hadn't done anything funny in a couple of innings.” 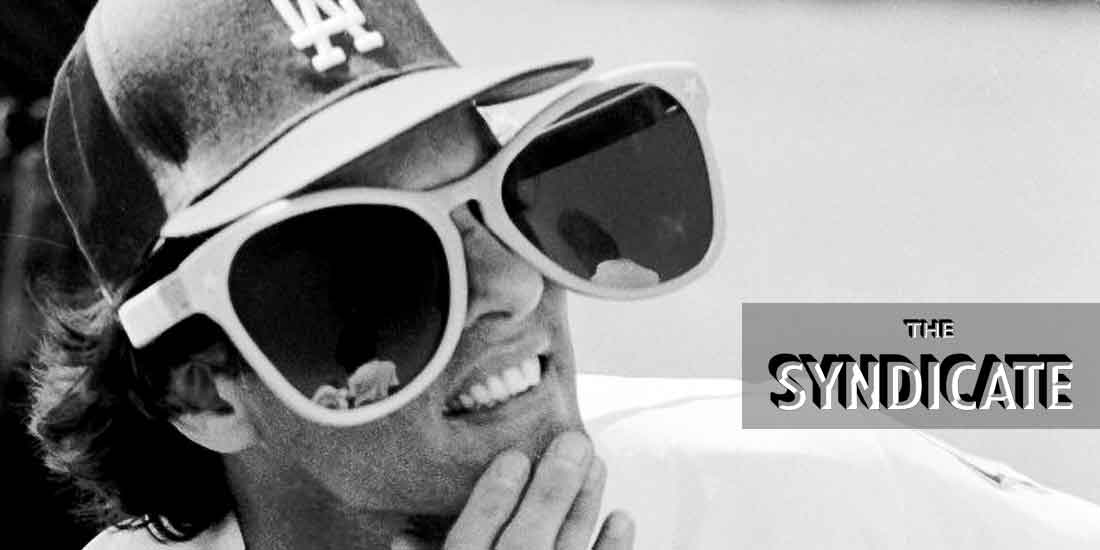 The only outfielder who ever collaborated on a 2-9 putout at first base is probably the only player who ever locked his manger in a hotel room by tying the doorknob to a palm tree. But that’s what Jay Johnstone did in a game against the Pittsburgh Pirates.

And to Tommy Lasorda.

In the opening game of an important series against the Pirates in Pittsburgh, Johnstone was playing right field for the Phillies on July 28, 1975. But he didn’t stay there all day.

With the score tied 1-1 in the bottom of the fifth inning, leadoff hitter Frank Taveras singled, and everyone in the park expected the next batter, pitcher Bruce Kison, to attempt a sacrifice bunt. Larry Christenson, only 21, was pitching for the second place Phils, who trailed the first-place Bucs by 5.5 games.

But why was the right fielder running in?

“You can’t believe you’re seeing it,” said Oates, later manager of the Texas Rangers. Johnstone hadn’t told Oates he’d try it, but he figured if the catcher saw him and the ball wasn’t hit, he’d throw the ball. Johnstone had successfully executed the play a few times in the minor leagues.

“Oates saw me, made a quick toss and I fell in front of Taveras,” Johnstone said. The two became entangled on the ground and the umpired ruled the runner out.

“Jose Pagan, the Pirates’ first base coach, said to me ‘Where did you come from?’” said Johnstone, who had two red welts on his neck, courtesy of Taveras’ spikes. 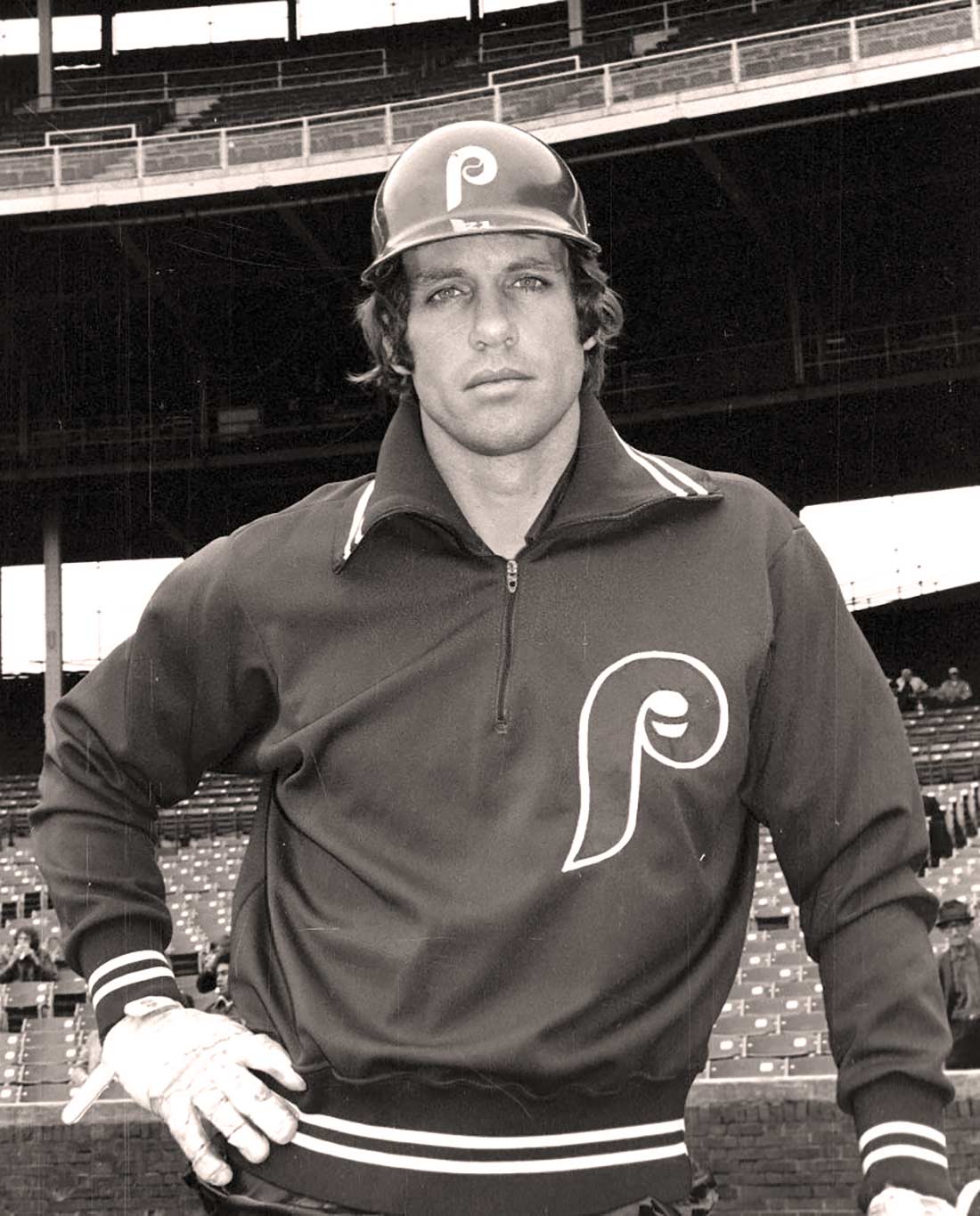 “I don’t know why I threw the ball,” said Oates. “You can work for 20 years and never see that play.”

“Everybody in the dugout was kind of surprised,” said Johnstone.

Phillies manager Danny Ozark, often exasperated by Johnstone’s behavior, said to him, ‘What if he’d hit the ball?”

After the game, Ozark said, “I just took another drag on my cigarette. Jay’s unpredictable.”

The game remained tight until the Phils scored three runs in the eighth inning and another in the ninth. The Bucs scored one run in the bottom of the ninth on a Willie Stargell home run against Christenson, who hurled a complete game.

The final score was Phillies 5, Pittsburgh 2.

“I just took another drag on my cigarette. Jay’s unpredictable.”

Johnstone had tried the play a few times in the majors, without success. The year before he tried the play against the Cubs at Wrigley Field, but the crowd started hollering when they saw Johnstone running towards first base and pitcher Jim Lonborg, distracted by the noise, stepped off the mound. 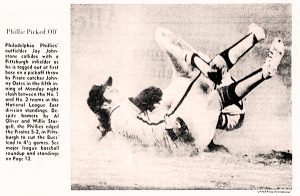 After the game, Taveras said, “I saw what Allen was doing and I knew where Cash was, so I told myself, “Hey, there’s nobody here,” Imagine how I felt when Johnstone took the ball and tagged me out.”

Johnstone said he first attempted the play in Puerto Rico during a winter ball game. It was successful. And the runner he tagged out?

Ray Kelly, Phillies beat writer for the Philadelphia Bulletin, wrote in the next day’s paper: “(The Phillies) pulled off what has to be the season’s most unusual play….This is my 30th year on the baseball beat and it was the first time I ever saw it done.”

“I never thought to ask Jay why he did it,” Oates said. “Only somebody as goofy as Johnstone would try it. He was probably bored and hadn’t done anything funny in a couple of innings.”

This is a man who exchanged uniforms with a groundskeeper and dragged Dodger Stadium’s infield between innings.

He shut Lasorda in his spring training motel room, forcing the Dodgers manager to miss breakfast.

He ran lefthander Steve Howe’s underwear up a centerfield flagpole.

During a promo for an upcoming game between the Yankees and Indians on NBC’s “Game of the Week,” he said. “I drove through Cleveland once, and it was closed.”

And the Phillies did go on to win that game in Pittsburgh in which the first out in the home fifth is recorded 2-9. “I’ve had people come up to me and say it’s never happened before or since,” Johnstone said. “We tried it a couple of times more that year, but it didn’t work. One time the batter, Don Kessinger, fouled off the pitch. I never got another throw. They started taking a look at me after that.”

A 2x World Series Champion, Johnstone had a lifetime postseason BA of .476 with 5 RBI and a career batting average of .267 over a 20 yr career never striking out more than 75x in a season. 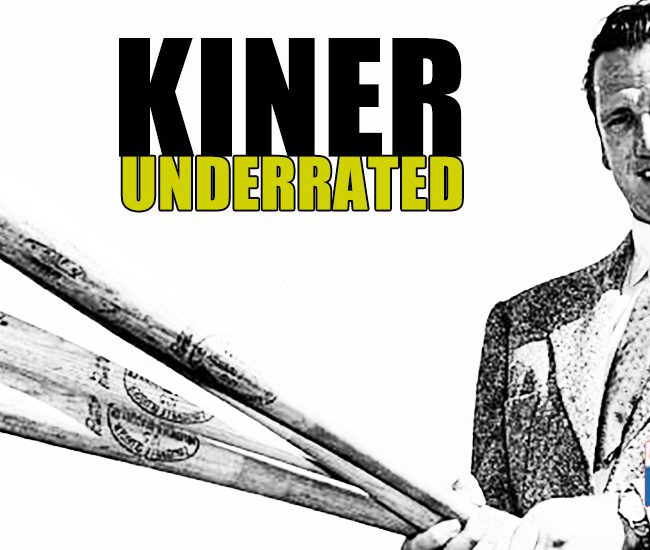