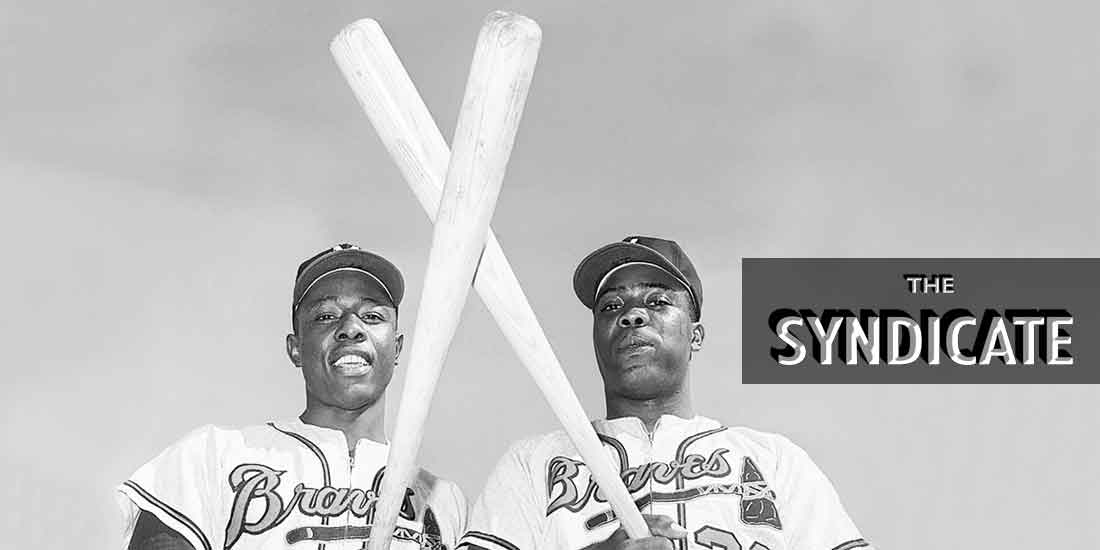 I n the Summer of ‘62, Jack Kennedy was president, Jack Benny was pretending to be a violin virtuoso, and the Beatles were a small-time band trying to break into the British concert circuit.

I was a 14-year-old kid at Camp Modin, tucked into the woods near the tiny town of Canaan, Maine, and dying to get my hands on baseball news and baseball scores without the aid of any electronic devices.

Our bunks didn’t even have air-conditioning – let alone cable-TV or cell phones – so we had to make do with transitor radios, old copies of The Sporting News, or daily newspapers discarded by staff or camp counselors.

One hot July afternoon, I found a copy of The New York Times, which then printed boxscores two days after night games were played. That was the way I discovered something historic happened to my favorite team, the Milwaukee Braves, on the night of July 12.

I had become a Braves fan five years earlier when Milwaukee beat the New York Yankees in the World Series.

All my friends in Northern New Jersey rooted for the Yankees, especially after the Brooklyn Dodgers and New York Giants announced plans to move to California for 1958, but I figured the Braves must be better because they won the first World Series I had ever watched.

Eagerly scanning the boxscores that day, I was thrilled to see the Braves beat the St. Louis Cardinals, 8-6. But it was the way they won that really grabbed my attention.

Although the boxscore did not convey the actual play-by-play, any trained observer could have figured it out.

What I learned was that Tommie Aaron pinch-hit a solo home run in the bottom of the ninth inning and Hank Aaron, then and now my favorite player, hit a grand-slam, capping a five-run explosion and ending the game. 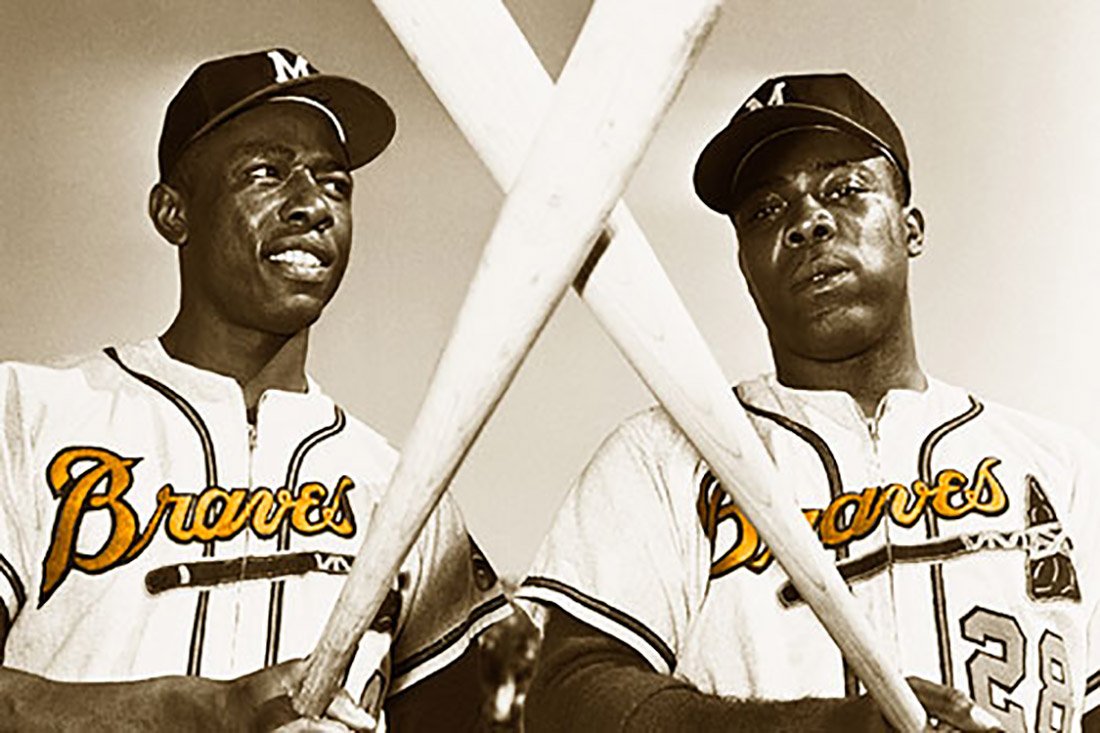 I knew that was unusual. In fact, it turned out to be the only time Hank ended a game by hitting a home run with the bases loaded. None of his other 754 home runs did that.

I also wondered how many times the Aaron brothers homered in the same game, especially since Tommie was basically a scrub who played sparingly.

Looking back, that game still stands out in Braves franchise history.

Brothers rarely play for the same team at the same time. Even when they do, they don’t make a habit of hitting home runs in the same game – let alone the same inning.

In fact, Hank Aaron and younger brother Tommie homered in the same inning only once – on July 12, 1962. But their ninth-inning handiwork on that date gave the Milwaukee Braves a most unlikely come-from-behind victory.

The Braves fell behind in the first inning and stayed there until the last. Then the Aarons swung into action.

With one out, Tommie came up to pinch-hit for the pitcher. A rookie that year, he could never escape the enormous shadow of his big brother. But in that inning, he almost did.

“He finished with a puny total of 13 home runs, two of them game-enders. But one year he had a terrific red Topps card that is treasured by collectors.” 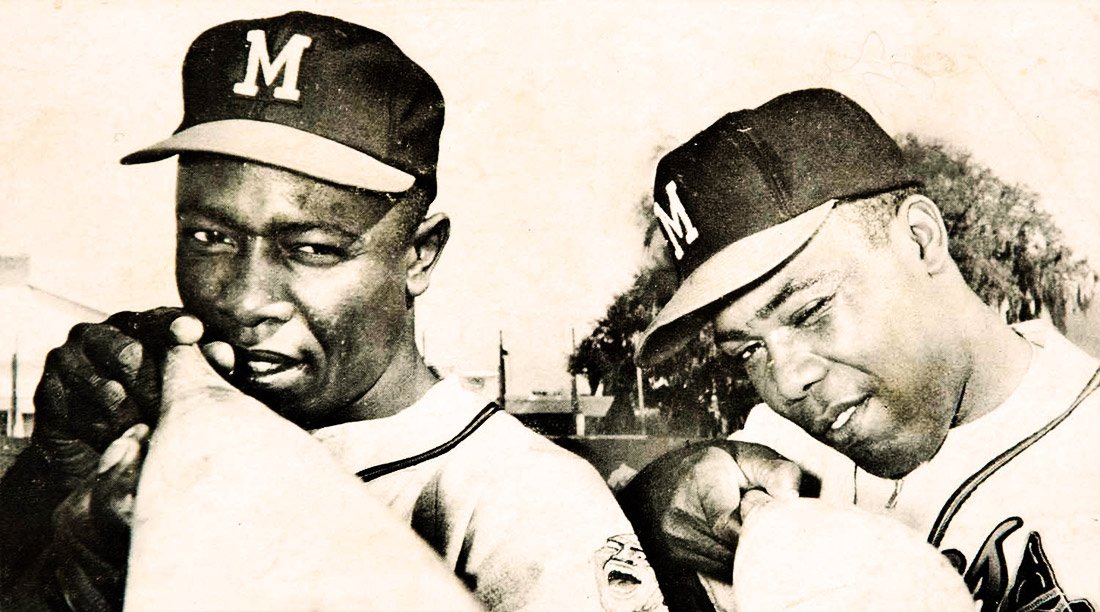 Tommie slugged a home run against Larry Jackson, then the leading St. Louis starter (with Bob Gibson closing fast). Then, with the Cards still leading by a 6-4 score, leadoff man Roy McMillan singled. His hit signaled the end of the day for Jackson.

Normally reliable St. Louis closer Lindy McDaniel allowed a single, then walked Eddie Mathews to load the bases with one out. As a result, McDaniel faced the next-to-impossible task of coaxing a ground-ball double-play from cleanup man Hank Aaron.

But Hank, the best hitter in the league, had other ideas.

Flicking his quick wrists, Hammerin’ Hank hit the ball over the fence for the only game-ending grand-slam of his career. During his 23-year career, he would end nine games with home runs, including the blast that won the 1957 pennant, but only on that occasion would one of his walk-offs come with the bases full.

The Braves won the game, played at Milwaukee County Stadium, and the Aarons wound up with more home runs than any brother tandem (768). But only on that hot July night did they connect in the same inning.

It was the first time since 1938, when Lloyd and Paul Waner hit consecutive home runs in the same inning for the Pittsburgh Pirates, that any brother tandem teamed up to produce such timely long balls.

Tommie Aaron, branded a utilityman because he could play multiple positions, never got the fair shake his talent demanded. His surname worked against him, mainly because all of his coaches and managers thought he would be as good as his brother.

During a career that lasted seven seasons, Tommie played six positions – all three bases and the three outfield positions – but was most often used at first base, where he was a good if not gifted fielder.

He finished with a puny total of 13 home runs, two of them game-enders. But one year he had a terrific red Topps card that is treasured by collectors. 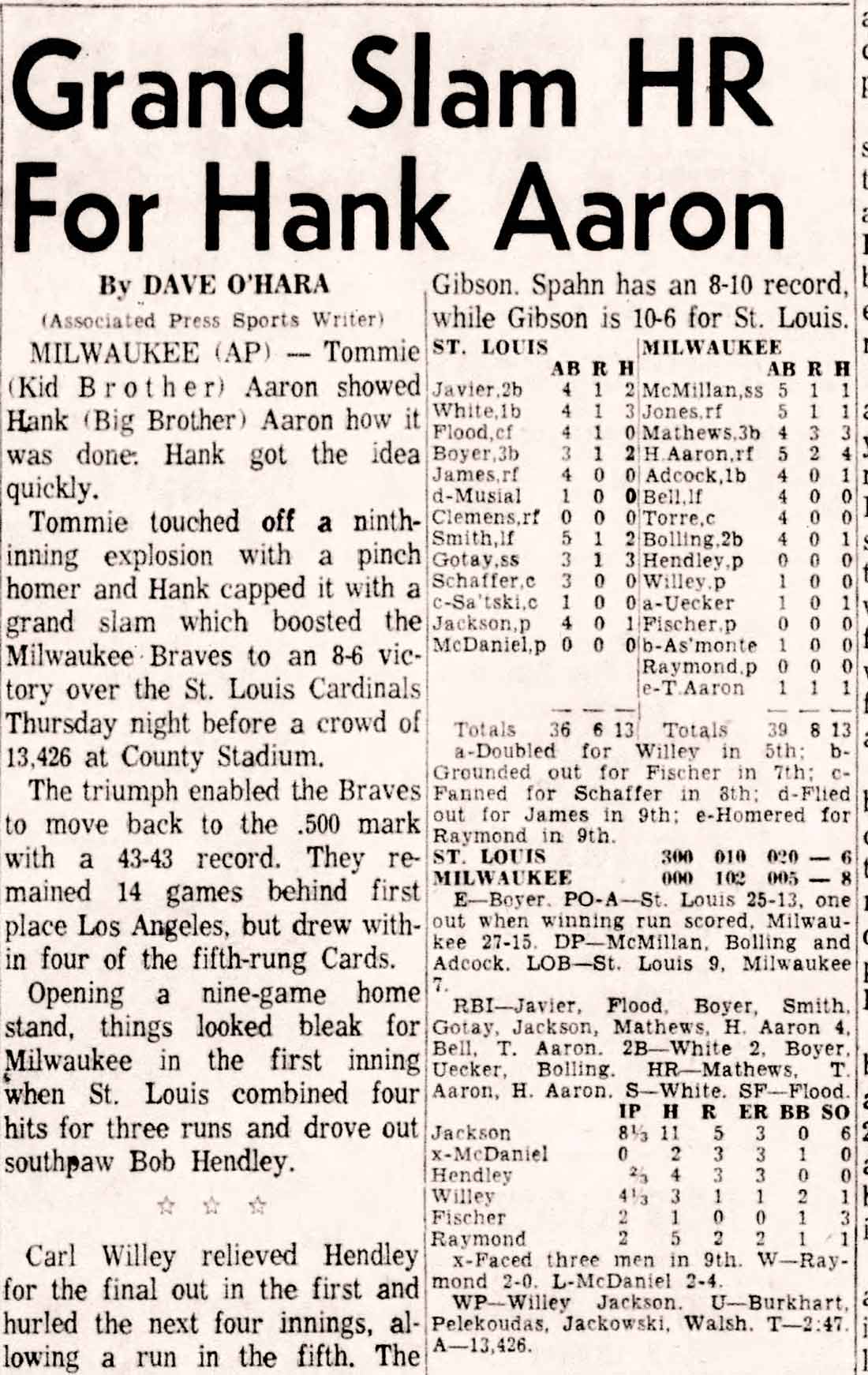 The Waners, the only brother combination in the Baseball Hall of Fame, homered in the same game three times and the same inning twice. On September 15, 1938, they went back-to-back – a feat duplicated by B.J. and Justin Upton of the Atlanta Braves, also in the fifth inning, on April 23, 2013.

No other brother tandem has ever hit consecutive home runs. But several did it in the same inning at least twice – with the Uptons and Ripkens (Cal Jr. and Billy) joining the Waners and Aarons on that exclusive list. On April 6, 2013, B.J. Upton led off the ninth with a game-tying homer and, one out later, Justin won the game with another solo shot. Atlanta 6, Chicago 5.

It turns out that a dozen brother tandems have connected in the same game.

The Uptons did it five times with the Guerreros (Wilton and Vladimir Sr.) and the Giambis (Jason and Jeremy) four times each. Then come the Waners and Aarons at three times apiece.

Despite injury-shortened careers, Tony and Billy Conigliaro connected in the same game twice for the Boston Red Sox while Matty Alou made the list twice – once with Jesus on the Giants after turning the trick earlier with brother Felipe. It’s worth mentioning that the three Alou brothers once batted in succession and produced the same result: three groundouts.

The Boyers (Clete and Ken) are the only brothers to hit home runs in the same World Series game, in the Game 7 finale between the Cardinals and Yankees in 1964.

The most recent fraternal pair to pop home runs in the same game were Corey Seager of the Dodgers and Kyle Seager of the Mariners in an interleague game on August 18, 2020.

There’s only one pitcher on the list of brother bombers. Wes Ferrell, who holds the major-league record for home runs by a pitcher (38), homered for Cleveland on July 19, 1933 in the same inning that Rick Ferrell, a catcher, hit one for Boston. Ironically, the wrong Ferrell (Rick) reached the Hall of Fame.

Former AP sportswriter Dan Schlossberg of Fair Lawn, NJ is a national baseball writer for forbes.com and the author of 38 baseball books, including The New Baseball Bible: Notes, Nuggets, Lists, and Legends From Our National Pastime (Sports Publishing, 2020). 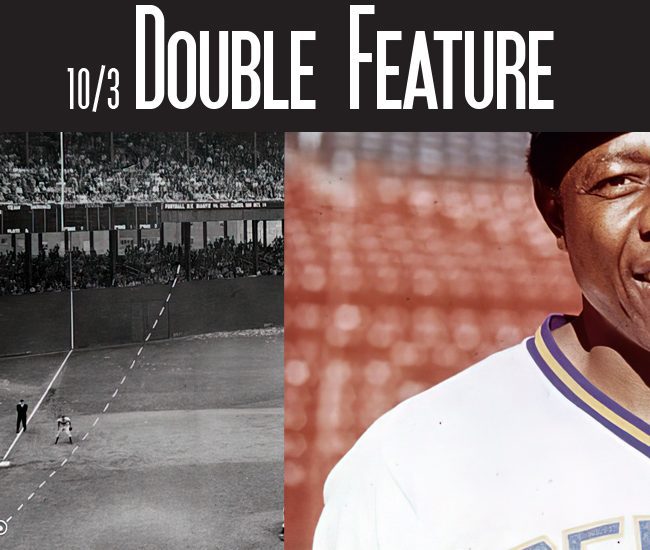 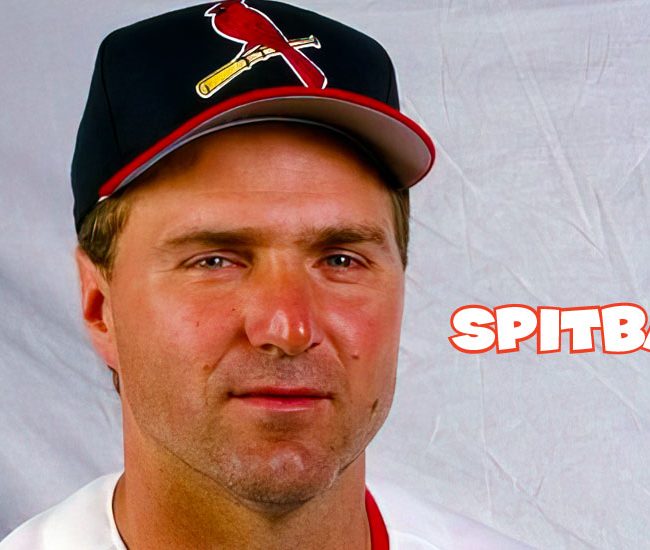