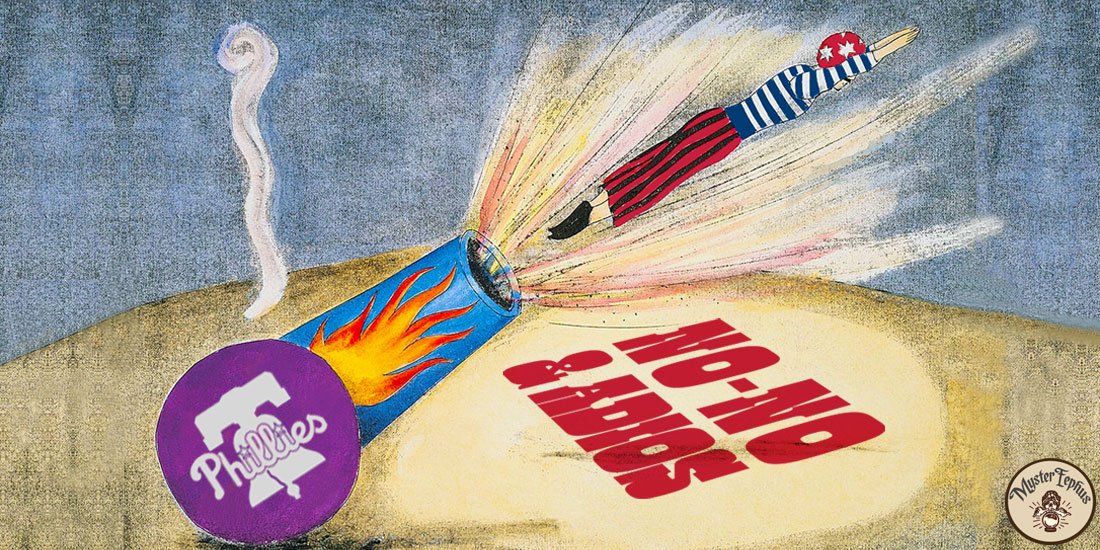 On July 25, 2015 at Wrigley Field, with the wind blowing in, Phillies pitcher Cole Hamels was one strike away from his first solo no-hitter (he’d been a part of one along with three other pitchers a few years earlier).

Lifting his right leg, Hamels, about to throw his 129th pitch and with the count full, threw a curveball – his fourth best pitch – that hung over the outside part of the plate. The batter, rookie sensation Kris Bryant, belted it to centerfield. Hamels did not turn to see where the ball went and his shoulders seemed to slump. Did he lose the no-hitter?

On the warning track, outfielder Odubel Herrera staggered underneath it as wind blew the ball in several directions. He seemed to catch it in front of the ivy, then stumbled to the ground.

“Did he make the catch?” Phillies broadcaster Tom McCarthy said. Sitting up on the warning track, Herrera raised his glove to signal he caught it.

“He made the catch! The 13th no-hitter in Philadelphia Phillies franchise history,” McCarthy exclaimed. The Phils won the game 5-0. And it was the last pitch Hamels threw as a Phillie.

A few days later, Hamels and left-handed reliever Jake Diekman were traded to the Texas Rangers for six players (one was a salary dump), and is believed to be the first time in MLB history a pitcher was traded immediately after throwing a no-hitter.

He had squared off against Cubs starter and that season’s Cy Young Award winner Jake Arrieta. Hamels was in command, allowing two walks while striking out 13.

Afterwards, Hamels told reporters it was “just a surreal moment. Nothing will top winning a World Series, but this is probably on that top list. That’s right under it.” About Herrera’s catch for the final out, Hamels said, “Thank goodness the wind was blowing in.”

Another surrealistic angle to the game was how Hamels had pitched in his last two starts. After compiling a superb 2.48 earned-run average in 11 outings from May 8 to July 5, he had been rocked for 14 runs and 20 hits over 6⅓ innings. That included a start on July 10 in San Francisco in which Hamels was knocked around for 12 hits and 9 earned runs in 3⅓ innings, the worst start of his career.

According to the Society for American Baseball Research, it was the first time the Cubs had been no-hit in 50 years, since Sandy Koufax’s perfect game on September 9, 1965, in Dodger Stadium. The last time the Cubs were no-hit at Wrigley was a few weeks before, on August 19, 1965, when Cincinnati Reds hurler Jim Maloney tossed a 10-inning no-hitter. The last no-hitter at Wrigley was Sept. 2, 1972 when the Cubs’ Milt Pappas blanked the San Diego Padres.

A Philadelphia writer described Hamels as possessing Hollywood looks and a Hall of Fame changeup. He was a top high school prospect from San Diego, but he broke his left arm in his junior year. After he graduated, the Phillies gambled that he was properly healed and selected him in the first round of  the 2002 draft (17th overall).

Between injuries and the Phillies being cautious with him, he only pitched in 36 games at four levels of four minor league seasons before being called up in May 2006. 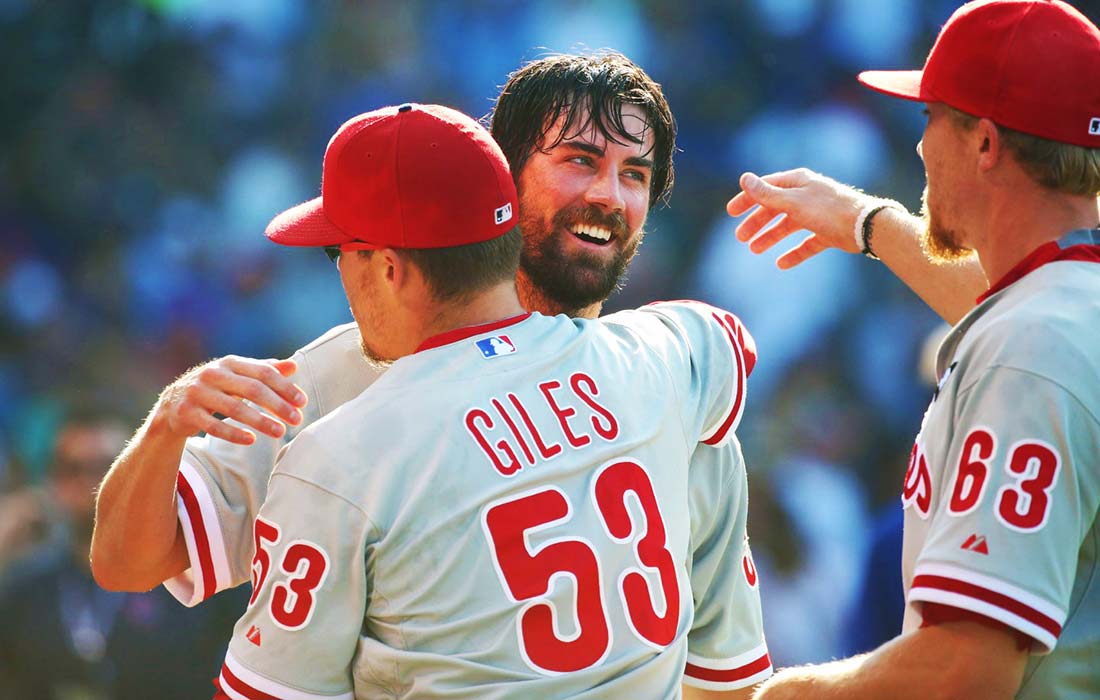 In his Major League debut on May 12, he pitched five scoreless innings, allowed one hit, struck out seven batters and walked five in a no-decision against the Cincinnati Reds.

He had a three-pitch arsenal: a solid fastball, one of the best changeups in the game, but an inconsistent curve ball – when it didn’t break, it was usually smashed. Then he developed a cutter, which he was able to throw for strikes more consistently than his curve. That elevated him from a very good pitcher to a top-flight pitcher.

In his first full season in the majors, 2007, he went 15-5, helping the Phillies win the first of five consecutive National East titles. The following year he went 14-11, but shined in the postseason, being named the MVP of the Division series against Milwaukee and of the World Series against Tampa Bay. Hamels is one of only two Phillies to be named a World Series MVP (the other was Mike Schmidt). In their 137-year history, the Phillies have produced only two pitchers who are in the Hall of Fame: Grover Cleveland Alexander and Robin Roberts; very few hurlers have come through the Phillies farm system to achieve success, and Hamels is among that rare breed.

He had solid seasons from 2009 to 2014, helping the Phillies win one more pennant and four more NL East titles. Hamels had participated in the 11th no-hitter in the franchise’s existence on September 1, 2014, in Atlanta, when he pitched six hitless innings against the Braves. Three relievers, Jake Diekman, Ken Giles, and Jonathan Papelbon, followed with a hitless inning each to secure the no-hitter and a 7-0 Phillies win. 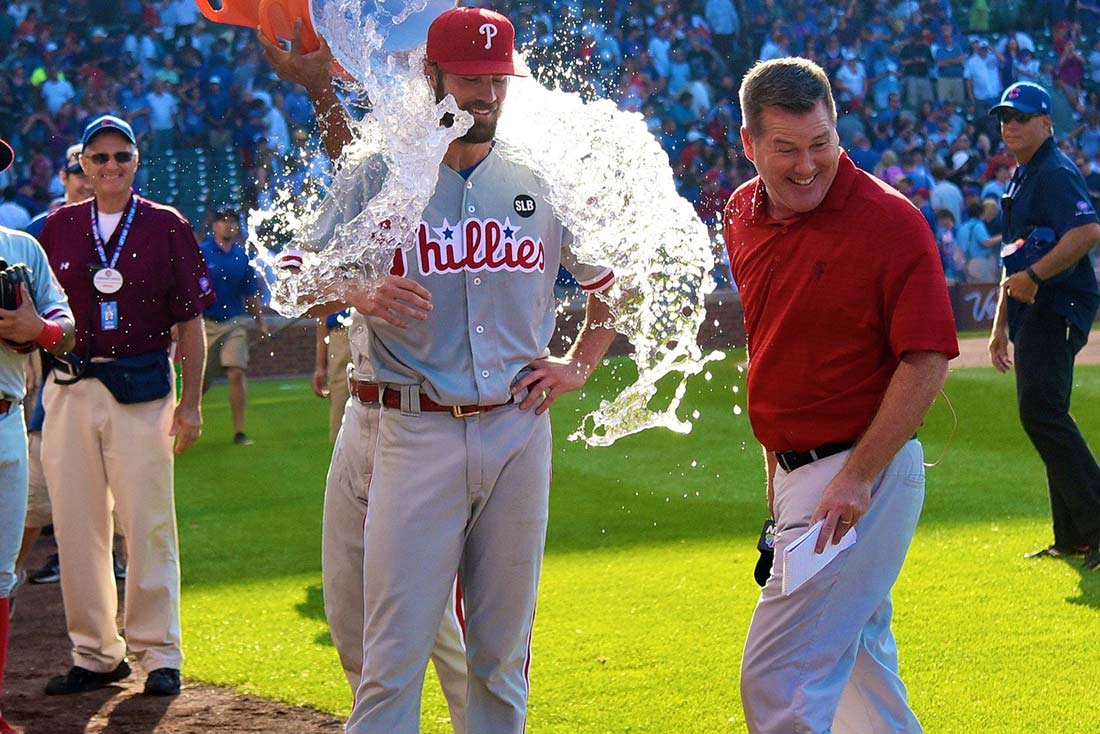 Philadelphia Phillies starter Cole Hamels gets doused after pitching a no-hitter against the Chicago Cubs in a baseball game in Chicago, Saturday, July 25, 2015. The Phillies won 5-0. (AP Photo/Matt Marton)(AP)

While Hamels might have those Hollywood looks, the Hall of Fame is not in his future, and one of the reasons is an abysmal lack of run support. Philadelphia sports broadcaster and writer Reuben Frank discovered that in his Phillies career, Hamels pitched in 60 games in which he went at least six innings and gave up two earned runs or less, but did not win any of those starts. The nadir happened in a game against the Mets on August 13, 2010; the Phillies had only one hit, a single by Hamels, who lost the game 1-0.

But the Phillies nucleus was getting old and after 2011 the team was not winning. Hamels was one of the few trade chips the Phillies held. His being traded was almost a foregone conclusion, but he had one more start to make his mark before being dealt.

“If this was Cole Hamels’ last start with the Phillies, it was a beauty,” MLB writers Carrie Muskat and Todd Zolecki began their account of the game.  They also wrote, “Hamels had more hits himself — he doubled in the eighth — than Chicago did in the game.”

After joining the Rangers he went 7-1 for the remainder of 2015, and was 15-5 in 2016, helping Texas win the AL West each time. He went 11-6 in an injury-shortened 2017, and was traded to the Chicago Cubs mid-way through the 2018 season and pitched two scoreless innings in the Cubs’ wild-card playoff loss to the Colorado Rockies.

He was a free-agent after the 2019 season, and he signed with Philadelphia’s hated division rival the Atlanta Braves; reportedly, the Braves offered him twice as much as the Phillies. Hamels threw 3.1 innings and was then shut down for the rest of the season. With more than half of the 2021 season completed, he still remains unsigned, Hamels remains unsigned, but has recently showcased for a number of MLB teams looking to add pitching for a second half push.