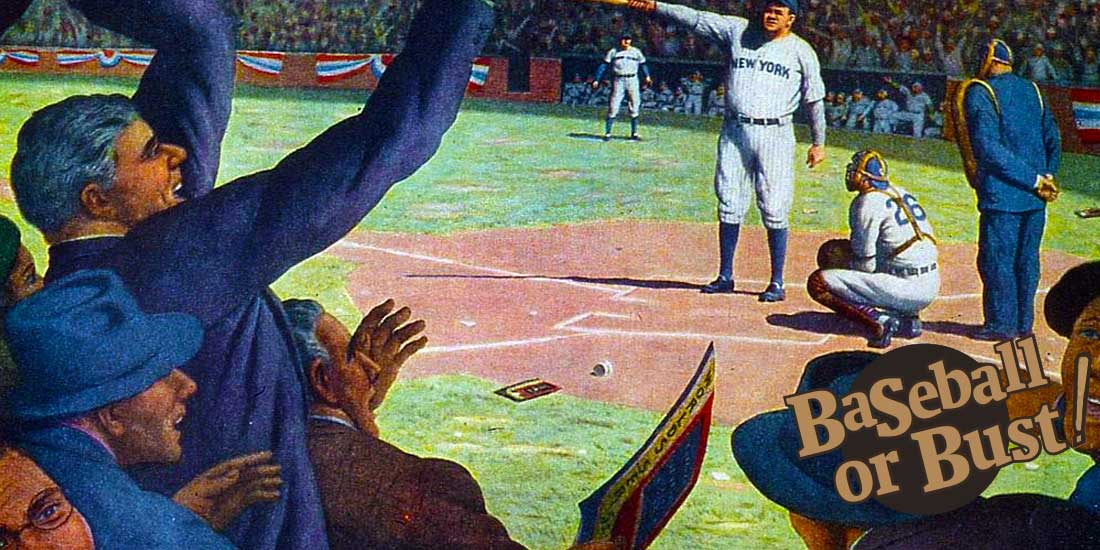 Baseball always comes back to Babe Ruth, no matter what superstars come along in the game. Ruth is getting a lot of attention these days because of the pitching and hitting heroics of the Angels’ Shohei Ohtani.

August 21st will mark the 90th anniversary of Babe’s 600th home run. To begin to understand how big an accomplishment that was consider that the next highest home run total at the time in 1931 was Rogers Hornsby with 293 home runs.

The Babe more than doubled the next best home run total in the game.

That’s complete diamond dominance. That’s forever. And it was Babe Ruth who made the Yankees into a powerhouse.

Sports historian Ernestine Miller also pointed out to Baseball or Bust this week that Ruth led the American League that season with a .373 batting average and 128 walks and a .700 slugging percentage.

The New York City based Miller noted that no one else in baseball hit his 600th home run until Willie Mays hit his 600th some 38 years later on September 27, 1969. Two years later Hank Aaron would hit the magic number of 600.

So here we are 100 years from Babe’s fourth straight home run title in 1921 when he blasted 59 home runs and the Babe still captivates our baseball imagination and conversation. To that extent, the delightful and informative Babe Ruth Birthplace & Museum in Baltimore is shedding new light on an amazing page in Babe Ruth’s youth that no one really knows about.

“Somehow they found out that St. Mary’s Industrial School had a really good baseball team, headlined by this pitcher/catcher named George Ruth and coached by Brother Mathias.”


Here at Baseball or Bust, though, we bring the stories.

Everyone knows about Ruth playing baseball for Brother Mathias at St. Mary’s Industrial School for Boys in Baltimore, but George Herman Ruth also spent time in Detroit playing for an Industrial League team called Burroughs with other players from St. Mary’s as they dominated the Detroit league.

Turns out Babe’s show first went on the road in 1908, long before he became a major leaguer in 1914, pitching for the Red Sox. This fact was unearthed by a man named Stephen G. Joiner who came across a postcard that featured the Burroughs team and lo and behold there was Babe. Joiner sent the information to the Babe Ruth Museum and Michael Gibbons, Director Emeritus and Historian of the museum got on the case.

Burroughs ran a prominent adding machine company in Detroit at the time. They took up two city blocks and nearby was St. Joseph’s Boys Home, run by the Archdiocese of Detroit. The home was located on a side street about a block away from Burroughs Adding Machines manufacturing plant. St. Mary’s, run by the Archdiocese of Baltimore, and St. Joseph’s Home for Boys were sister schools, both connected to the Catholic Church.

That’s how Babe and the boys wound up playing in Detroit. Just an amazing piece of history. And for those who love baseball history, and we sure do here at BallNine, another wonderful chapter to Babe’s life story. You didn’t see anything like that in the 1948 film “The Babe Ruth Story’’ with William Bendix.

According to the research, the Detroit team used “fake names’’ so that is why there was no official record of Babe Ruth playing for St. Joseph’s in Detroit in 1908. 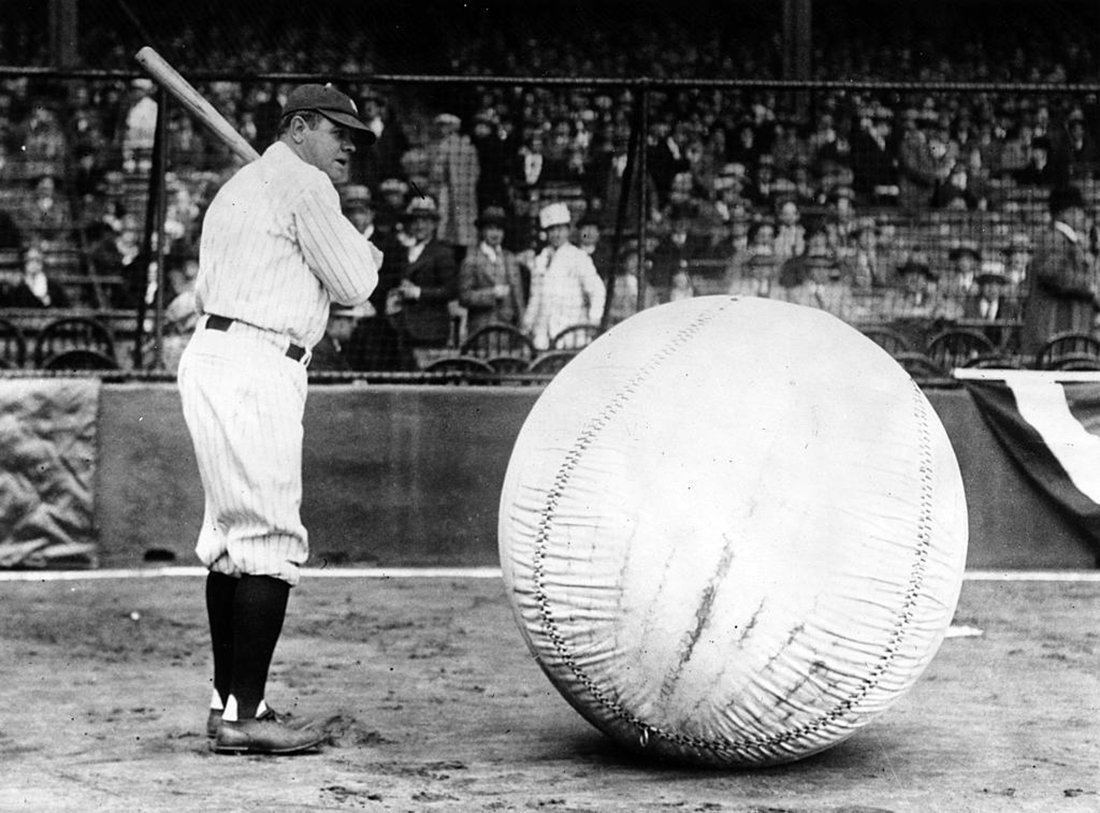 To tell this story to the public 113 years after it happened and had been lost to history is what Gibbons and others like him long to do. “This is what museum guys are,’’ Gibbons told BallNine on Wednesday. “We are story tellers, and we use artifacts or in this case photographs, postcards to help interpret the story. And that is a really good thing.’’

Baseball was America’s game back then and Industrial Leagues sprung up around the country.

“They felt to incur employee loyalty they started a lot of sports programs,’’ Gibbons said. “They had intramural teams within the company but then they would have teams that would play against other companies and that was the case here.

“Somehow they found out that St. Mary’s Industrial School had a really good baseball team, headlined by this pitcher/catcher named George Ruth and coached by Brother Mathias,’’ Gibbons told me. “Well, they went out there, the whole team and they played that summer in the Industrial League, they went 18-1 and won the league and nobody knows this story which is stunning to me.

“The league that they won was called the Manufacturer’s League and they played against teams from Ford and some of the other large manufacturing teams in the area.’’

“I gave him some pushback because he was making an incredible claim, but he did a lot of research on it and I got involved and it turns out he was correct,’’ Gibbons explained. “By all accounts this is a true story.’’

An amazing true story that no one really knew yet now because of the work of the museum, Gibbons and Joiner the story can be told.

“We found a team photograph from around that time of St. Mary’s with Babe Ruth on it and you could match and identify the faces of the players to a man,’’ Gibbons said.

In the Burroughs postcard, Brother Mathias looks short and that is where Gibbons originally pushed back. 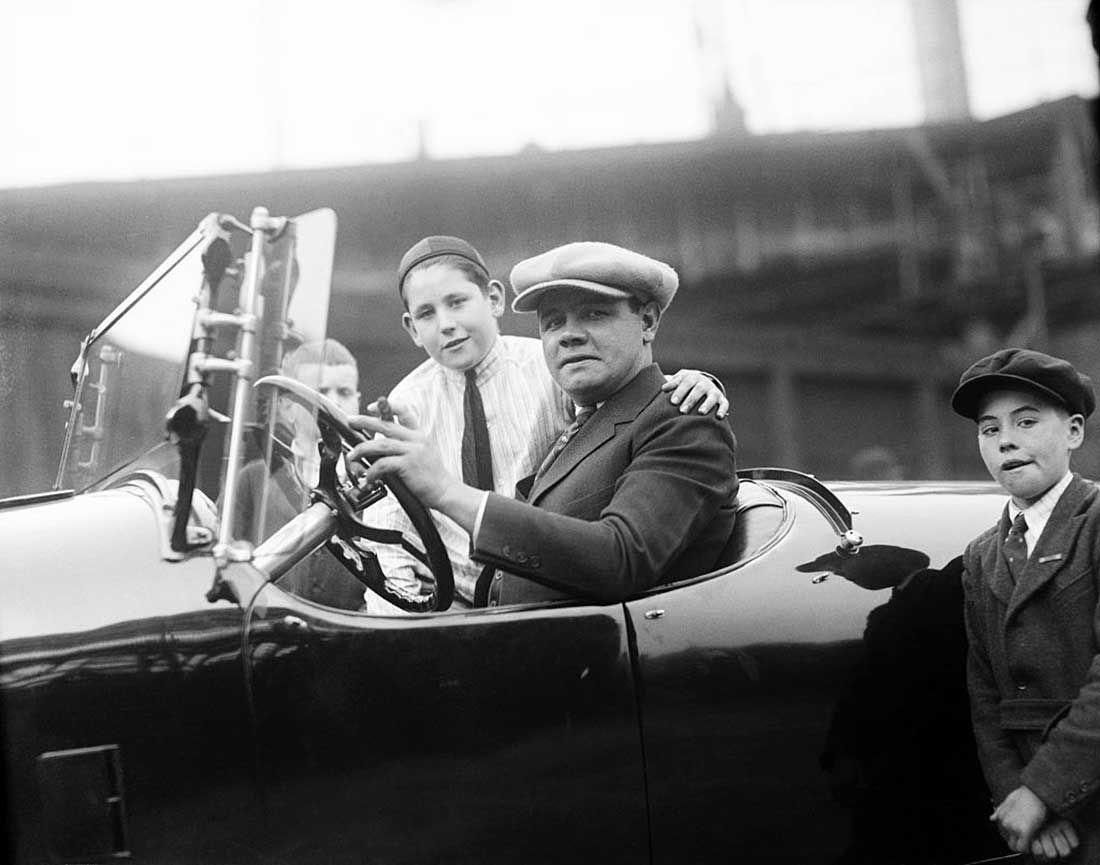 The homerun king is an ardent motorist, often traveling from city to city in his car instead of going by train with the Yankees. Taking out some of his youthful admirers for a spin in his speedy Packard roadster after the game. (Photo by Bettmann via Getty Images) April 28, 1921

“Brother Mathias was not short, he was a big dude, but when you really look at it you see a couple of the guys are sitting on the ground with their legs crossed and then you have two rows of benches,’’ Gibbons said. “Mathias is in the back row but you can see he is standing on the ground and that is why he looks short.’’

All this comes full circle when Orioles owner Jack Dunn, a former major leaguer who signed his first pro contract the year Babe Ruth was born, came to St. Joseph’s to scout a pitcher. At the time the Orioles were not a major league team. St. Joseph’s did not want to lose its star pitcher so, according to the research, Gibbons explained, “Brother Gilbert of St. Joseph’s did not want to lose his pitcher so he told Jack Dunn about the amazing pitcher at St. Mary’s, George Ruth. To protect his pitcher he said go get Ruth in Baltimore.’’

The rest is history.

“To get him out of St. Mary’s, Dunn had to sign legal guardian papers so Ruth became Jack Dunn’s baby,’’ Gibbons explained. “Within a month of spring training in 1914 you see his name in print and it is Babe Ruth because Jack Dunn’s baby got shortened to Babe and that is where it came from.’’

Now you know the rest of the story.

The interest in Babe Ruth remains high and all you have to do is go back a few months to see that an anonymous buyer purchased a 1914 Babe Ruth rookie card for more than a record $6 million, according to reports.

Perhaps that card will be displayed at the Babe Ruth Birthplace Museum some day.

With all the small business shutdowns, the Babe Ruth Museum, like all museums hit hard times recently, but loans were granted and now attendance is picking up. The museum is located at 216 Emory Street where Babe was born on February 6, 1895. The museum is just two blocks from Camden Yards.

I would visit the museum when in Baltimore for trips with the Yankees and always found something special there. With the Orioles struggling for years, though, attendance at their games has plummeted which does not help the museum. 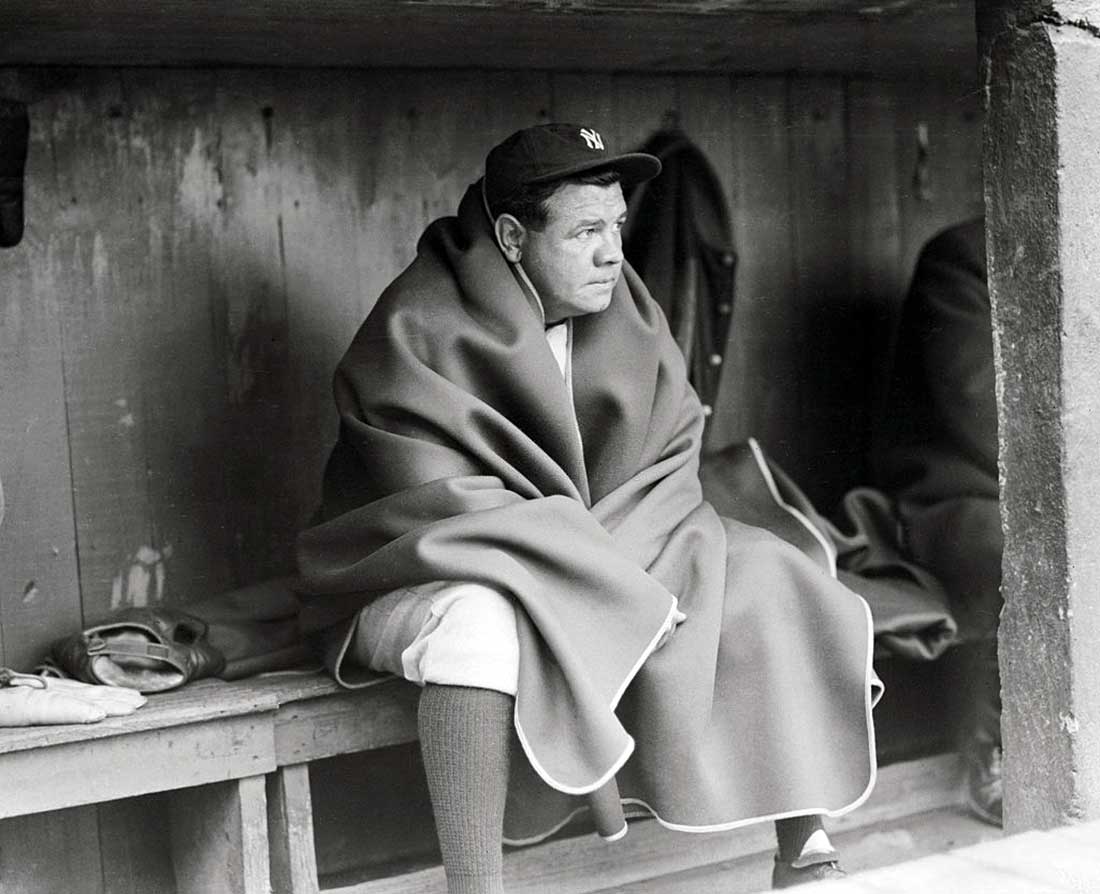 Babe Ruth sits wrapped in a blanket in the dugout at Ebbets Field prior to an exhibition game with the Brooklyn Dodgers. (Photo by Bettmann via Getty Images) April 8, 1933

“Our attendance has popped back to about 35 percent from pre-Covid days,’’ Gibbons said. “We had 240 people the other day. It’s not what we used to do but we are open and we are doing okay.’’

Babe Ruth had the all-time home run record of 714 until it was broken by Aaron on April 8, 1974. Babe is baseball.

In 1931, the year he hit his 600th home run Babe was 36 years old and was in his 16th full season and was on base 328 times to lead the AL. And remember back then there were only day games and Ruth and the Yankees and all teams wore heavy flannel uniforms as Miller pointed out. This was also the year the Empire State Building opened.

“Joe McCarthy was in his first year of managing the Yankees,’’ Miller said. “He had managed the Cubs from 1926-30 and became the first manager to manage in both leagues. Babe was resentful of McCarthy because he felt he should be the manager after Bob Shawkey. McCarthy was strict. He banned shaving in the clubhouse, forbid players to enter hotel dining rooms without a jacket and players had to report to breakfast by 8:30. No exceptions. Babe often liked to eat in his room.’’

“The 600th home run came against the St. Louis Browns at Sportsman’s Park against George Blaeholder,’’ Miller noted. “Ruth had three hits in the game and was ejected in the seventh inning.’’

The home run was a Ruthian blast and meant a lot to the Babe. “He paid a young fan $10 for the ball,’’ Miller said.

Ruth and Lou Gehrig both hit 46 home runs that season to tie for the home run title. It would be the 12th and last home run title for Ruth. The Yankees would finish second that season with a 94-59 record. McCarthy would manage the Yankees for 16 years, winning eight pennants and seven World Series titles over that span.

Forever, he will be the Sultan of Swat, the Great Bambino and now there is one more amazing little chapter to his incredible life, covertly leading an Industrial League team in Detroit to a championship in the summer of 1908.