Rooftop With A View 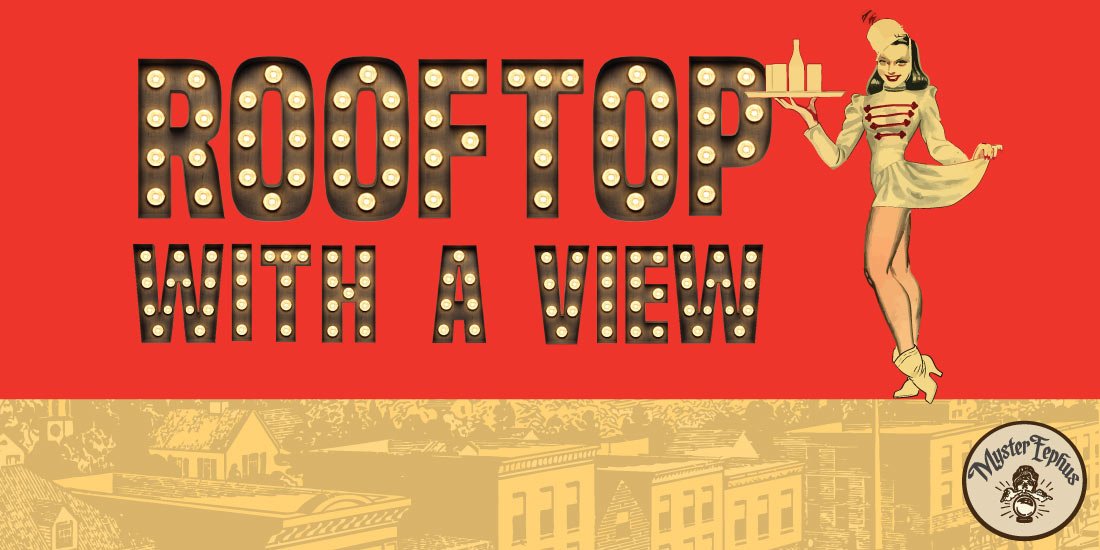 Playing against Connie Mack’s Athletics at Philadelphia’s Shibe Park, New York Yankees first baseman Lou Gehrig hit a homerun over the rightfield fence, across North 20th Street, and through the transom above the front door of the Busch family. Every morning, Mack would send a man to the houses behind the wall to fix any damages.

The repairman replaced the glass and painted the address, 2741, on it. Mrs. Busch, however, didn’t like the new transom. That afternoon, Gehrig hit another homerun breaking the glass above the door, and this time the repairman fixed it to her liking.

For much of his boyhood, Rooney and his neighbors had a bird’s eye view into the ballpark — actually, a much better than bird’s eye view. From of the front bedroom and roofs of their homes, fans would pay the the residents of the 2700 block of North 20th Street to view ballgames. Those families would charge 50 cents per seat, the same price as a bleacher seat in the stadium. The setup was particularly profitable from 1929-31, when the A’s appeared in three consecutive World Series. Rooney’s father had convinced his neighbors to stop undercutting each other on ticket prices and build permanent bleachers on the roof. They also sold hot dogs and lemonade.

A neighbor of Rooney’s said the money his family made from those Fall Classics paid for their mortgage.

In 1930, a nun at St. Columba’s Elementary School asked her third-grade class who wanted to see the A’s win the World Series game that day. Every child raised his or her hand. Except Rooney. The teacher, surprised, asked Rooney why he didn’t want the hometown team to win.

“If the A’s lose today, then they have to play another game, and that will mean more money for my family,” he explained. For a number of years, Rooney, now 98, saw the A’s and their opponents in a way few children ever got to see a baseball game.

“My brother Gerry and I loved it, but our mother wasn’t so happy about having strangers come through our house,” Rooney recalled. Once, a homerun bounced into the Rooney home through an open door or screen door; right behind it was a boy trying to grab it. Rooney’s grandfather made him leave the house, but Jack got to keep the ball.

The Rooneys moved into 2739 North 20th Street in 1925. Three years later, when Jack was five, his father, also named John but referred to as Jack, took him to the roof to witness something special that day in the ballpark. Playing in the outfield for the A’s were Ty Cobb, Tris Speaker and Al Simmons, three future Hall of Famers. “There Kiddo,” he said to his son. “For the rest of your life you can say you saw three of the greatest stars of all time playing in the same outfield.”

Simmons, like many A’s players, lived in the neighborhood surrounding the ballpark, known locally as Swampoodle. He boarded with a woman. Back then baseball was played in the daytime, which left players free to party at night, even during Prohibition. Simmons would often oversleep the next day, and his landlady, thinking it imprudent for her to wake the ballplayer, hired Rooney’s younger brother Gerry to get him up.

“Al, get up!” Gerry would bark. “How are you going to win the batting title if you don’t get to batting practice?” Often Simmons would open the door and Gerry would sit down and talk to the outfielder while he dressed. 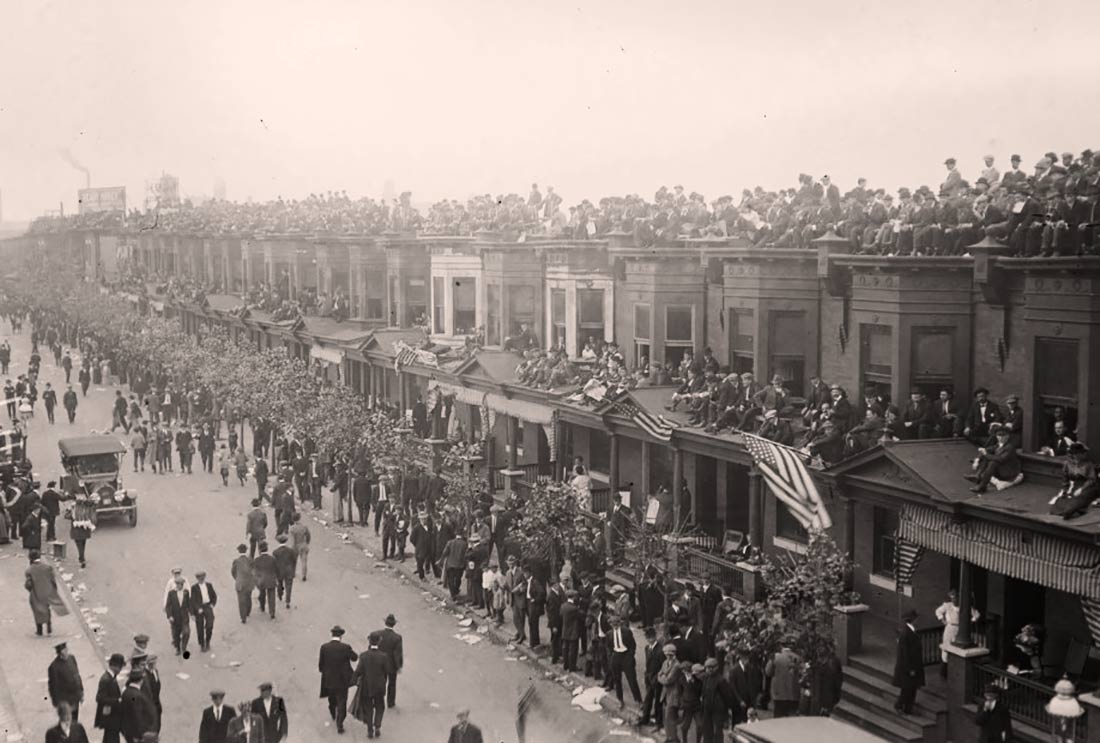 During the A’s three World Series appearances, Rooney’s father made a deal with the Pathé News Agency. He let the company place its cameras on his roof to film the games, which were then edited and shown in movie theaters – this was before television news.

One year, when the bleachers were sold out during the championship series, a man desperately wanted a ticket, but was told there were none.

“I’ll pay $10!” he pleaded. They found him a spot on the roof. Later, Rooney’s grandfather told him he saw the man behind the bleachers playing a game of craps with other fans.

But the “fun” of growing up behind the ballpark began to fade after the 1931 World Series, which the favored A’s lost to the St. Louis Cardinals. The Great Depression was cutting into ticket sales. A family that rented one of the houses in 1933 cut their ticket price to 25 cents, and the rest followed suit.

After finishing second to the Yankees in 1932, Mack began selling off his star players: Lefty Grove went to the Boston Red Sox, Al Simmons to the Chicago White Sox, Mickey Cochrane to the Detroit Tigers. Mack said he would never part with slugging first baseman Jimmie Foxx, but sold him to the Red Sox in 1935, and the A’s finished in last place that year and the following year. Until 1947, the A’s finished with losing records and were in last or next to last place in that stretch except for one year when they were sixth in the league.

“It was getting pretty boring with all the losing,” Rooney said.

Then in 1935, Mack decided not to share views of the team. He erected a 33-foot wall in right field. Nicknamed “The Spite Fence,” it blocked any view into the stadium from the homes on North 20th Street. Rooney’s father and the other homeowners went to court but lost the case.

In 1943, Rooney joined the U.S. Navy and trained to be a pilot, but the war was over before he saw action. During his time in the service, his parents sold the home and moved to another Philadelphia neighborhood. 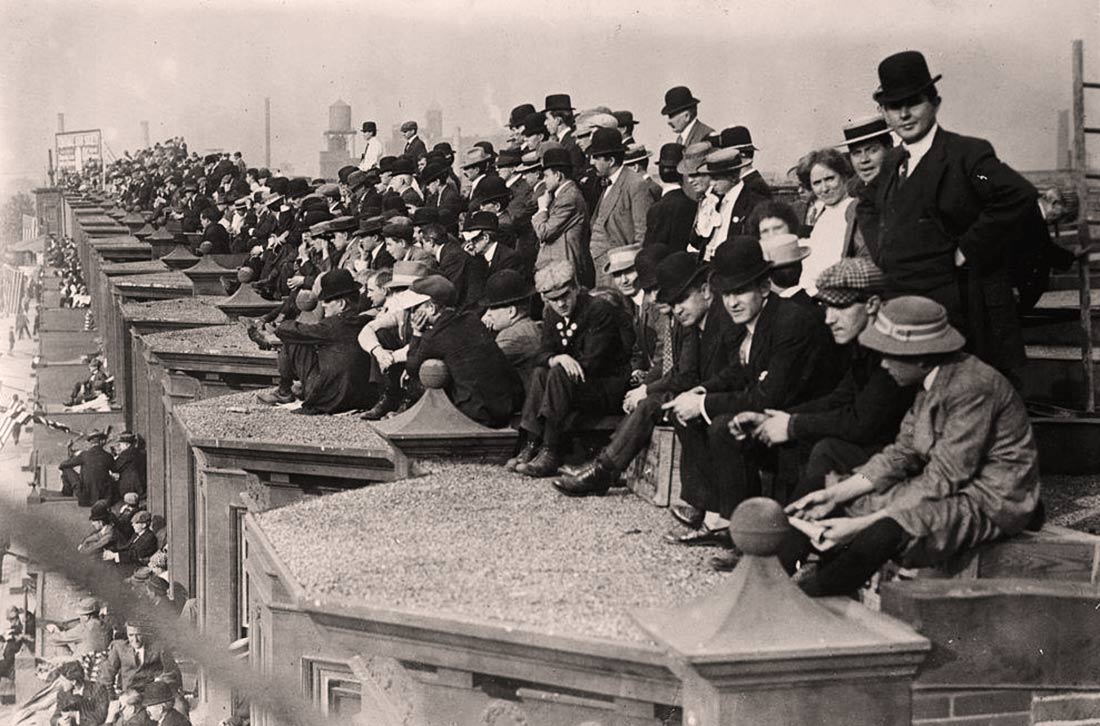 Game-day spectators enjoy the view from the rooftops of the 20th Street houses. (Image: Digital Collections, Library of Congress)

Unlike the rooftops near Wrigley Field in Chicago, the 2700 block of North 20th Street offered a better view of the action. Citizen’s Bank Park, home of the Phillies, has a set of bleachers deep in centerfield, known as the Roof Top Bleachers. Rooney went to visit the site in 2009 when the Phillies were in the post-season, and told Jeff Gammage of the Philadelphia Inquirer, “We were closer.”

The A’s left Philadelphia after the 1954 season for Kansas City. Rooney returned to Philadelphia after the war, became a psychology professor, and in 2012 published a memoir, Bleachers in the Bedroom: The Swampoodle Irish and Connie Mack. Shibe Park was renamed Connie Mack Stadium in 1953, and the Phillies played their last game there on October 1, 1970. After a fire, it was torn down in 1976. The Deliverance Evangelistic Church, a large and beautiful structure, was built on the site and opened in 1992. The entrance to the church is where home plate was located in the stadium.

But the homes Rooney and his neighbors lived in are still there.

He’s been back to the old homestead three times. Once he was driving with his son and they decided to swing by the houses. “I thought they looked very nice,” Rooney said.

A few years later, while telling his story to a magazine about living on the block during the A’s heyday, he went back to the street to be photographed. The last time he visited the home was in 2020, when he was taped by CBS This Morning about his childhood experiences.

Both Rooney and the houses have endured.

previous article
The Pretenders
next article
Top Down Failure 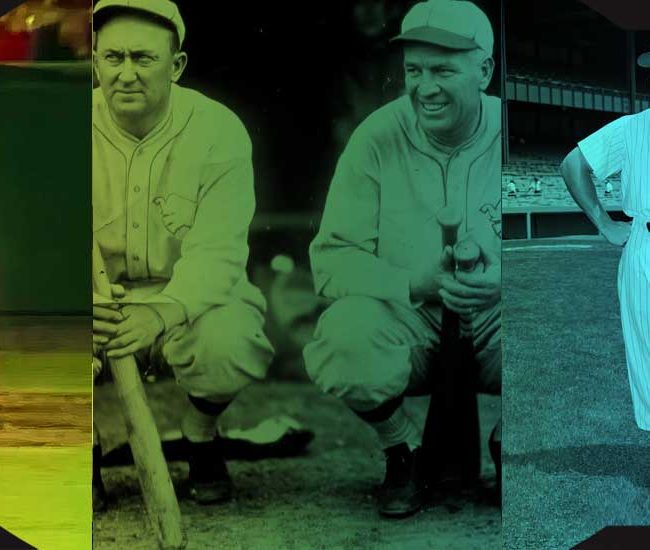 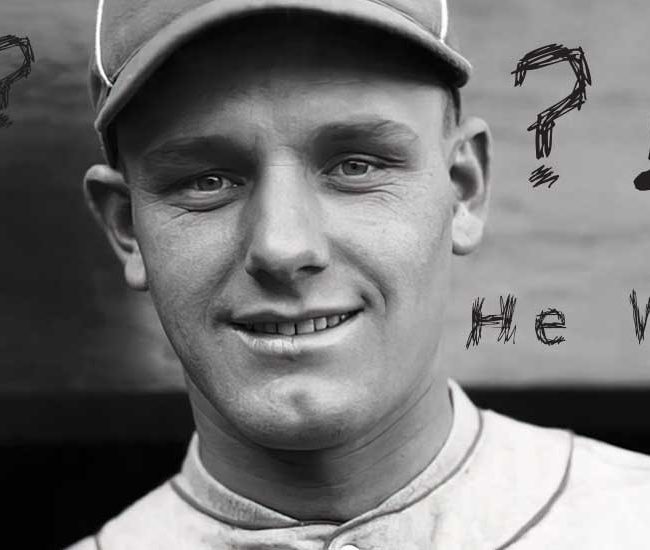