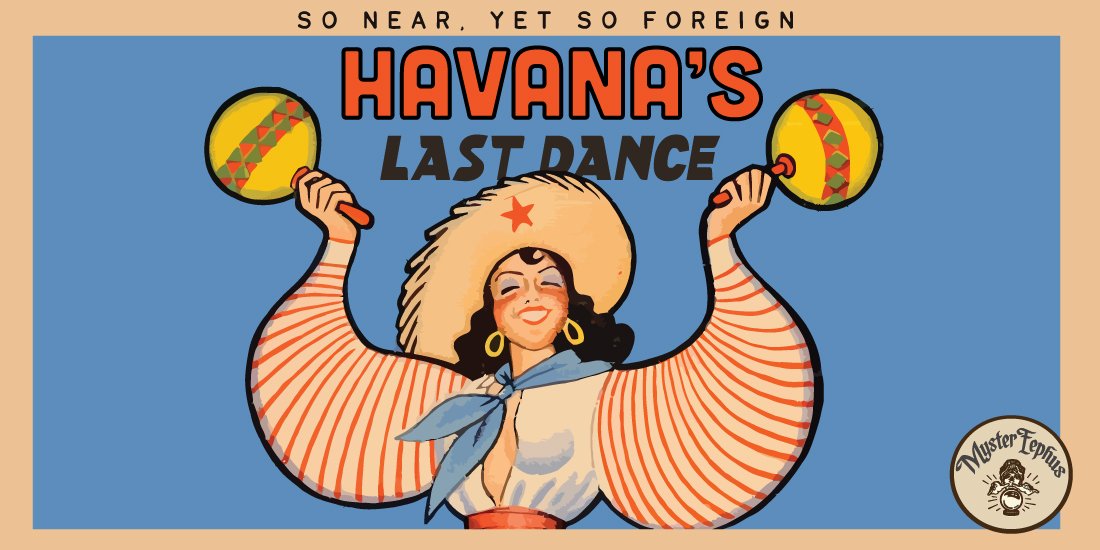 When the Havana Sugar Kings played the Minneapolis Millers in the 1959 Minor League World Series, one writer described the Cuban city as having more guns than bats.

Future Phillies, Yankees and Mets manager Dallas Green, who pitched there in the regular season, recalled, “Everywhere you looked there were guns. They told us not to stray too far from the hotel. It was exciting.”

Less than 10 months after seizing power on New Year’s Eve, Fidel Castro was playing coy with the United States and Soviet Union, not aligning himself with either nation.  But he was a big baseball fan and attended every series game played in Havana.

Baseball in Cuba started in the late nineteenth century, when a family sent two sons to an American college. They returned with bats, balls, gloves – and the game. Havana was a popular destination for winter ball, especially for Negro Leagues players who didn’t face segregation or racism. Havana had teams in the Florida International League from 1946-51, and in 1954 was awarded the AAA franchise as an affiliate of the Cincinnati Reds in the International League.

The owner, Bobby Maduro, had ties to Reds General Manager Gabe Paul, who used that connection to sign top Cuban players such as Tony Perez, Leo Cardenas, and Mike Cuellar. Players in the International League visited Cuba three times a year to play the Sugar Kings in front of their rabid home crowds.

“They were great baseball fans, they lived for baseball,” said Tommy Lasorda, who pitched during winter ball there in the mid 1950s. 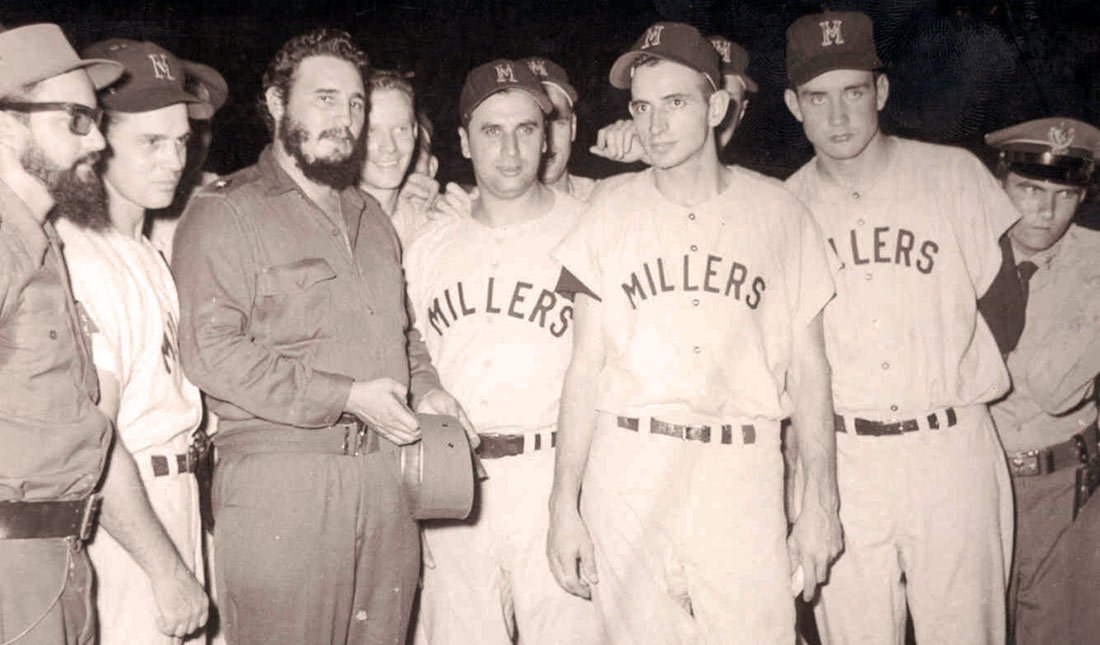 HAVANA - OCTOBER, 1959. Fidel Castro, fresh from his revolution in Cuba, greets the Minneapolis Millers, who, along with the Havana Sugar Kings fled bad weather in Minnesota to play the Little World Series in Havana. (Photo by Mark Rucker/Transcendental Graphics, Getty Images)

Havana, before Castro, was the Las Vegas of the East. There were casinos, glittering night clubs, horse racing and other attractions and distractions.  American players stayed in fine hotels, saw top performers in nightclubs and gambled in the city’s famous casinos.

(Castro later closed the casinos and expelled many of the entertainments off the island, which were backed by the Mafia.) 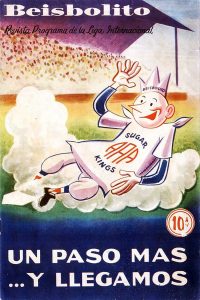 The cover of a score card for the Cuban Sugar Kings AAA baseball team.

The Sugar Kings that season were a young team with several players who went on to successful careers in the major leagues.

“We started jelling in the middle of the season,” said Manager Preston Gomez. “There was not much power, (the team had) pretty good speed. They didn’t make too many mistakes; they could do the little things to win the ballgame.”

They finished third in the International League, qualifying for the playoffs, and first defeated second-place Columbus in four games. Next, they then beat fourth-place Richmond in six games to win the International League championship, and the right to face the American Association champion, the Minneapolis Millers, an affiliate of the Boston Red Sox. Boston had recently promoted a 20-year old second baseman, Carl Yastrezmski, to the team managed by Gene Mauch.

Stew Thornley, author of On to Nicollet: The Glory and Fame of the Minneapolis Millers, wrote about the series in an article:

“The series opened at Metropolitan Stadium in Bloomington, Minnesota. The first three games were to be played in the Millers’ home park.

“Only 2,486 fans showed up on September 27 to watch Havana take the opener, 5-2, in a game played in a steady drizzle. Even though they were more than 1,500 miles from home, the Sugar Kings had the most vocal rooting section at the stadium. Cuban natives living in the area staked seats behind the Havana dugout. Equipped with maracas and Cuban flags, the fans cheered wildly, particularly during the Sugar Kings four-run rally in the third inning.

“As the weather grew colder the next day, the attendance dwindled to 1,062 for game two. The Millers bats were hot, however, and they used the long ball to battle back from 2-0 and 5-2 deficits. Roy Smalley — the brother-in-law of manager Gene Mauch – connected for a two-run homer to tie the game in the second inning, and home runs by Lu Clinton and Red Robbins retied the game in the last of the eighth. When Ed Sadowski opened the Minneapolis ninth with another home run, the Millers had pulled out a 6-5 win.

“The Havana players appeared more bothered by the frigid temperatures than they were by the Miller rallies. They consumed large quantities of hot coffee during the game, and a newspaper photo the next day showed a trio of Sugar Kings huddled around a fire they had built in a wastebasket in the dugout.

“On September 29, when the rain drops began turning to snow crystals, that evening’s game was called off, but (a) decision was made by the minor-league commission to shift the balance of the series to Havana.”

Upon their arrival, the teams received a gala civic welcome that included a parade from the airport to city hall.

The premier shook hands with the players from each team before settling into his box seat.  He also made it a point to be photographed with Mauch and the Millers players.

While the crowds loved baseball, anti-Americanism was starting to creep in during the season, says Ted Wieand, a Sugar Kings pitcher.

“If you were a tourist, they didn’t like you,” he said. “But if you were a ballplayer, you were OK.”

Havana won the next two games in extra innings, and the Millers won the following game, setting up a deciding game seven. Castro was seated in the Sugar Kings dugout in game six.

With the score tied 2-2 in the bottom of the ninth, pitcher Raul Sanchez walked and was sacrificed to second. With two outs, Dan Morejon singled to center, setting up a play at the plate. Sanchez dove headfirst into home and was called safe, and the stadium erupted.

View of Cuban President Fidel Castro as he talks with players from the Cuban Sugar Kings baseball team in the stadium clubhouse, Havana, Cuba, 1959. (Photo by Transcendental Graphics/Getty Images)

“After we won the seventh game, Castro went into the dressing rooms,” says Gomez., who went on to manage the San Diego Padres. The Supreme Leader made it a point to be photographed shaking hands with the Millers’ manager.

Baseball endured an uneasy transition when Castro assumed power. No one knew if he would do away with professional sports.

Cookie Rojas, who played 16 seasons in the majors, was a second baseman for Havana, and said, “When Castro took over in ’59, people were excited about the revolution. But things were basically normal.”  That is, until a celebration got out of hand.

On July 25, fans crowded into the stadium for a game that started at 9 p.m. (when it was cooler) against Rochester. Soldiers were admitted free and carried their guns as a status symbol. At midnight, when it became July 26, the day Cubans celebrated their independence, soldiers began firing shots into the air to celebrate. “But the bullets came down,” Gomez said.

One ricocheted off the helmet of Rochester third base coach Frank Verdi and another grazed Sugar Kings shortstop Leo Cardenas, who was slightly hurt but said it “was just a scratch.” The American umpires ran off the field.

Wieand hid under a jeep used to bring pitchers in from the bullpen. “I was no hero,” he said.

The next year, American teams said they wouldn’t play in Havana because it was unsafe, though one must wonder what part politics played in the decision.

After opening the 1960 season with a 13-game homestand, the Sugar Kings relocated to Jersey City, NJ. Sanchez, who pitched for the Reds and Washington Senators, said he didn’t like the new home: “It was too cold.”

He has a copy of the daily El Mundo with a front-page picture of a jubilant Castro celebrating with the Sugar Kings in the clubhouse. Wieand kept his Sugar Kings championship ring in a glass case in his home.

El Commandante shows off his form, 1959.

The series was a moral victory for “little” Cuba over the “big” United States, who some Cubans disliked because of its support for previous governments and the business practices of American companies, such as United Fruit. “The people of Cuba weren’t working for themselves,” said Wieand.

Thornley said the series has earned a place not only in minor league history, but in baseball history.

“The closeness of the games, the quality of the players. And then you get into the whole thing with Castro and players and on the field and all that stuff,” he said recently.

“Obviously, it’s minor league, so it never stands out compared to the major league World Series. Or maybe, anything else even.   Particularly with what had happened that year with Castro coming to power, the turmoil that eventually got the minor leagues to move Havana, out of there the following year,” Thornley said.

“Mauch said, some of our players were really nervous about what would happen if we would have won, and some of the players that I corresponded with or talked to, (they said) ‘We were disappointed to lose that series, but, hey, we were happy to get out of there with their hide’. I don’t know that anything would have happened to them. There’s a story that I got from Millers outfielder Stu Locklin.

“Before game seven, and this is after the Millers had won games five and six, Castro came and patted the revolvers (on his belt). He said, ‘Tonight we win.’  I’m sure he wasn’t gonna shoot him if the Millers had won but, yeah, maybe you could see these guys are a little nervous, A little freaked out. I see (that) getting their head a little bit more and, not above at least a little intimidation.”

“But just what had happened in the past three months, or past six months or a year with the changeover in power and what that meant for Cuba itself. And baseball still being a very big thing to the people there and Castro who is a big fan,” he said.  “From the social aspects of it, we know we’ll never have a major league World Series with that kind of stuff.”

previous article
No Bull
next article
Learn From Eli & Peyton 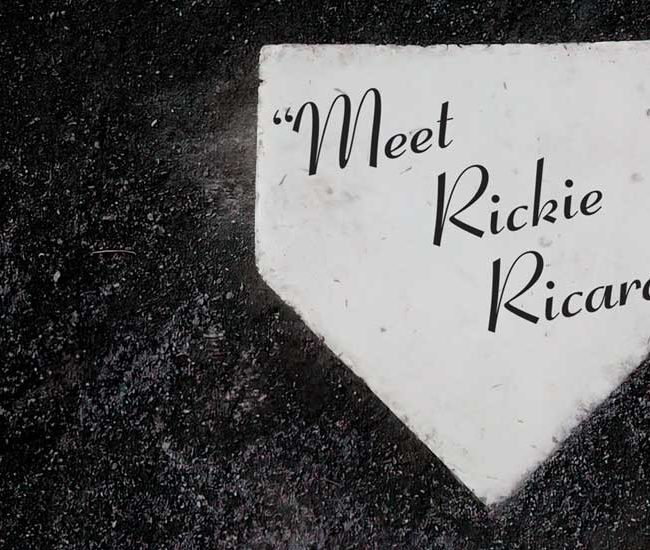