Where Have You Gone? 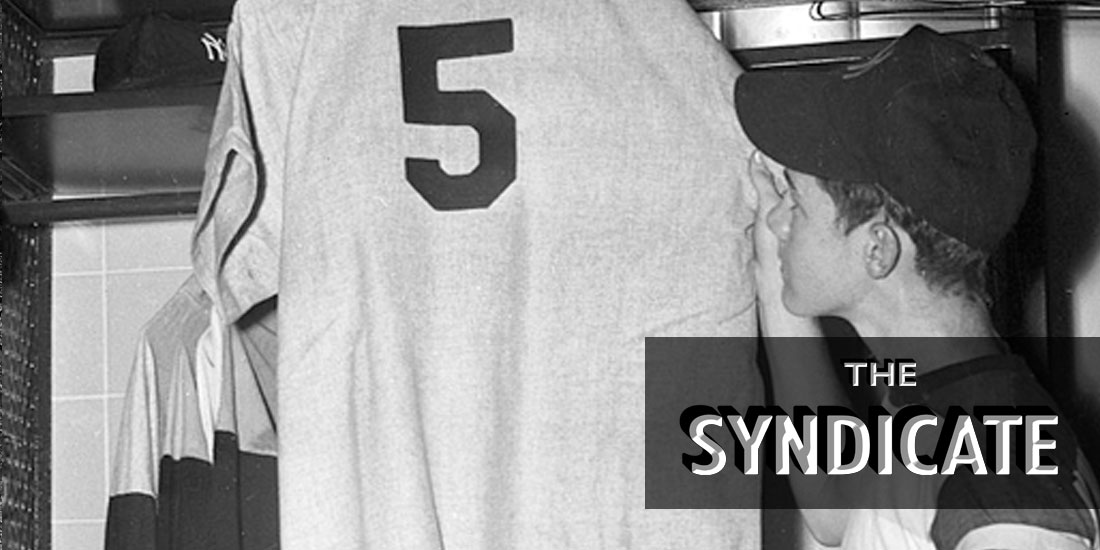 Joe DiMaggio is one of baseball’s iconic figures: a superb player who crossed the line into popular celebrity culture—one of those transcendent athletes like Babe Ruth or Muhammad Ali who were larger than their sports.

He had songs written about him (Les Brown’s “Jolting Joe DiMaggio”) was mentioned in Rodgers and Hammerstein’s South Pacific (Bloody Mary’s skin was compared to the texture of his glove), was longed for by Simon and Garfunkel (“Where have you gone, Joe DiMaggio”)and married one of Hollywood’s most glamorous figures, Marilyn Monroe. He was also the first great Italian American hero in the nation’s history.

DiMaggio had a distinguished career, marred as was the case for many of his contemporaries by service in World War. When DiMaggio joined the Army at the end of the 1942 season, he was 27. In seven seasons he had compiled a remarkable record including a career batting average of .339, two MVP awards and a 56 consecutive game hitting streak that no one has approached in 80 years.

DiMaggio was released from the Army in September 1945, and he turned 31 two months later. The last six years of his career were marked by physical problems and the slow decline typical of baseball players as they grow into their mid-30s. In 1946 for the first time in his career he failed to hit .300 or drive in 100 runs. He recovered somewhat and hit .300 for the next four seasons, winning an undeserved third MVP award in 1947 (Ted Williams won the Triple Crown that season, out-hitting DiMaggio by 23 points, driving in 17 more runs and belting 12 more home runs). 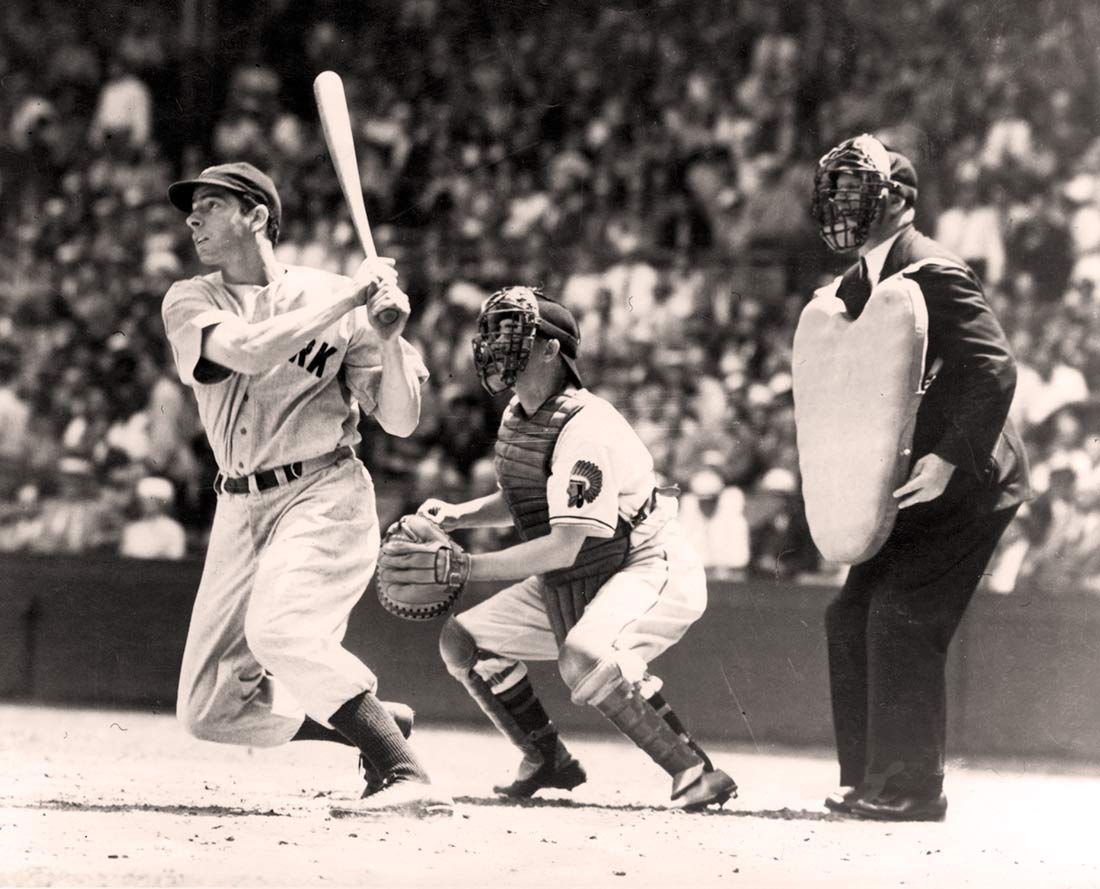 Baseball commentators usually regard 1948 as DiMaggio’s last great season as he led the league in homers and runs batted in. DiMaggio’s physical problems had begun to take a serious toll on him in 1947. He injured his right shoulder and developed painful spurs in both heels. His right heel was operated on after the 1948 season and he was unable to play until June 1949. In the 76 games that remained he hit a robust .346 while averaging almost a run batted in per game. It looked as if at age 35 he remained able to perform at the top of his game. But few baseball players get better in their late 30s. Baseball writers wondered whether as one put it, “Joe has suddenly been taken old.”

I believe a case can be made that 1950 not 1948 was his last great season, one where he showed the talent and skills that had carried him to the top of the baseball world.

The 1950 season didn’t start well for DiMaggio or the Yankees who had won the World Series the year before but were regarded as a weaker squad then the Red Sox who they narrowly defeated in 1949. That Red Sox team was led by Ted Williams who topped the league in home runs, tied for most runs batted in, Vern Stephens who matched Williams with 159 RBIs and pitchers Mel Parnell and Ellis Kinder who won 48 games between them.

The Baseball Writers Association reflected that view by picking the Red Sox to win the pennant over the Yankees by an overwhelming vote of 116 to 38.

“When baseball is no longer fun,” [DiMaggio] said of bowing out, “it’s no longer a game.”

The ‘50’ campaign was a dog fight among four teams: The Yanks, Red Sox, Cleveland and a surprising Detroit Tigers squad. The Yanks spent most of the season in second place while the Tigers team spent all but seven weeks in first place.

DiMaggio started slowly during the first two months of the season with just 5 home runs and was hitting .256 by June 1st.  At one point in mid-May, his batting average was .220, his low mark for the season.

He perked up in June, usually a good month for him, by hitting 11 home runs but by the mid-point of the season was hitting .271. What hurt his average were two 0 for 13 streaks early in the season. He was frustrated, angry at himself. One of his biographers Richard Ben Cramer attributed DiMaggio’s poor performance at the beginning of the 1950 season to the collapse of his plans to reunite with his former wife, Dorothy Arnold. To most baseball observers it was simpler: he just looked old and tired.

Casey Stengel – who did not get along with DiMaggio – tried an experiment in early July. He moved DiMaggio to first base to rest his legs. Unfortunately, he didn’t discuss the move with DiMaggio who had never played that position in his career. The idea was a disaster. DiMaggio made all the plays in that game but looked awkward and clumsy doing so, something the classy DiMaggio found embarrassing. He never played first base again.

After the All-Star game, with DiMaggio still struggling, Stengel further humiliated him by dropping him from the clean-up spot for the first time since 1939. When he finally returned to the line-up, he began to gradually raise his batting average, but his power numbers were poor. He went on a stretch of ten games in August without driving in a single run—hardly what you expect from your clean-up hitter. His batting average on August 10 was .270 when Stengel suddenly benched him for a week arguing that he needed to rest his sore shoulder. There was nothing wrong with DiMaggio’s shoulder. That was simply an excuse. 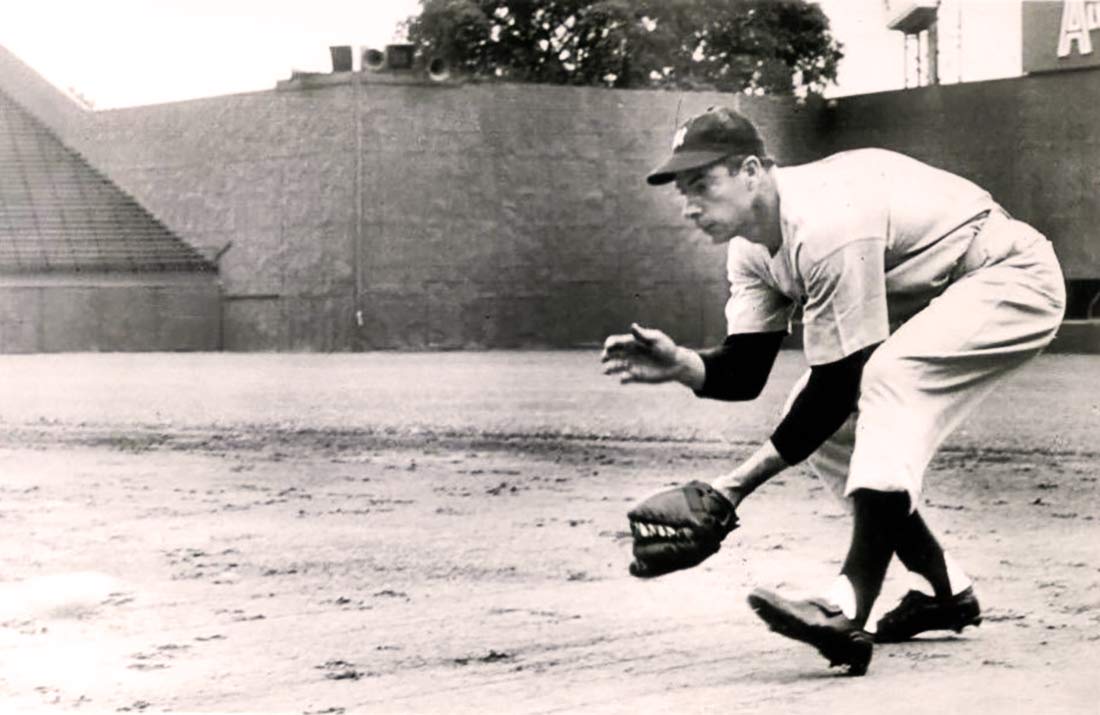 And then DiMaggio went on a hitting spree that showed he still could play the game at a high level. For the last month and half of the season-a total of 55 games—he played like the DiMaggio of old. On August 18th he returned to the line-up against the woeful, last place Philadelphia A’s. He went to bat 14 times, had 7 hits including 2 home runs while driving in 6 runs. (On a personal note, I was at those games as a 14-year-old DiMaggio fan. He won the first game of the series with a home run in the 9th inning and hit a home run in the first inning of game three to give the Yankees a lead they never surrendered. I was thrilled)

From August 18, DiMaggio raised his average from .270 to .301. He hit 11 home runs and drove in 44 runs, playing the key role as the Yankees beat back challenges from Detroit and Boston to win the American League title by 3 games. Any doubt about DiMaggio and the return of his skills was removed on September 10 in a game at Washington’s Griffith Stadium. He hit three home runs and a double. It was the third time he hit 3 homers in a game – but what made this one special was that he did it in the most difficult ballpark for righthanded batters. The foul line in Griffith Stadium was 401 feet down the line, by far the longest of any baseball field. No one had ever done that before.

In the World Series against a young Philadelphia Phillies team, he helped lead the Yankees to a four-game sweep, batting .308. He won the second game of the series, hitting a long home run into the upper deck of Shibe Park.

His final statistics for 1950 were clearly DiMaggio-like: 33 doubles, 10 triples and 32 home runs. His 122 RBIs ranked fourth in the league and was tied for fourth in runs scored. He led the league in slugging percentage as well as accumulating the most extra base hits in the American League. Not bad for someone who was written off as finished earlier in the season. 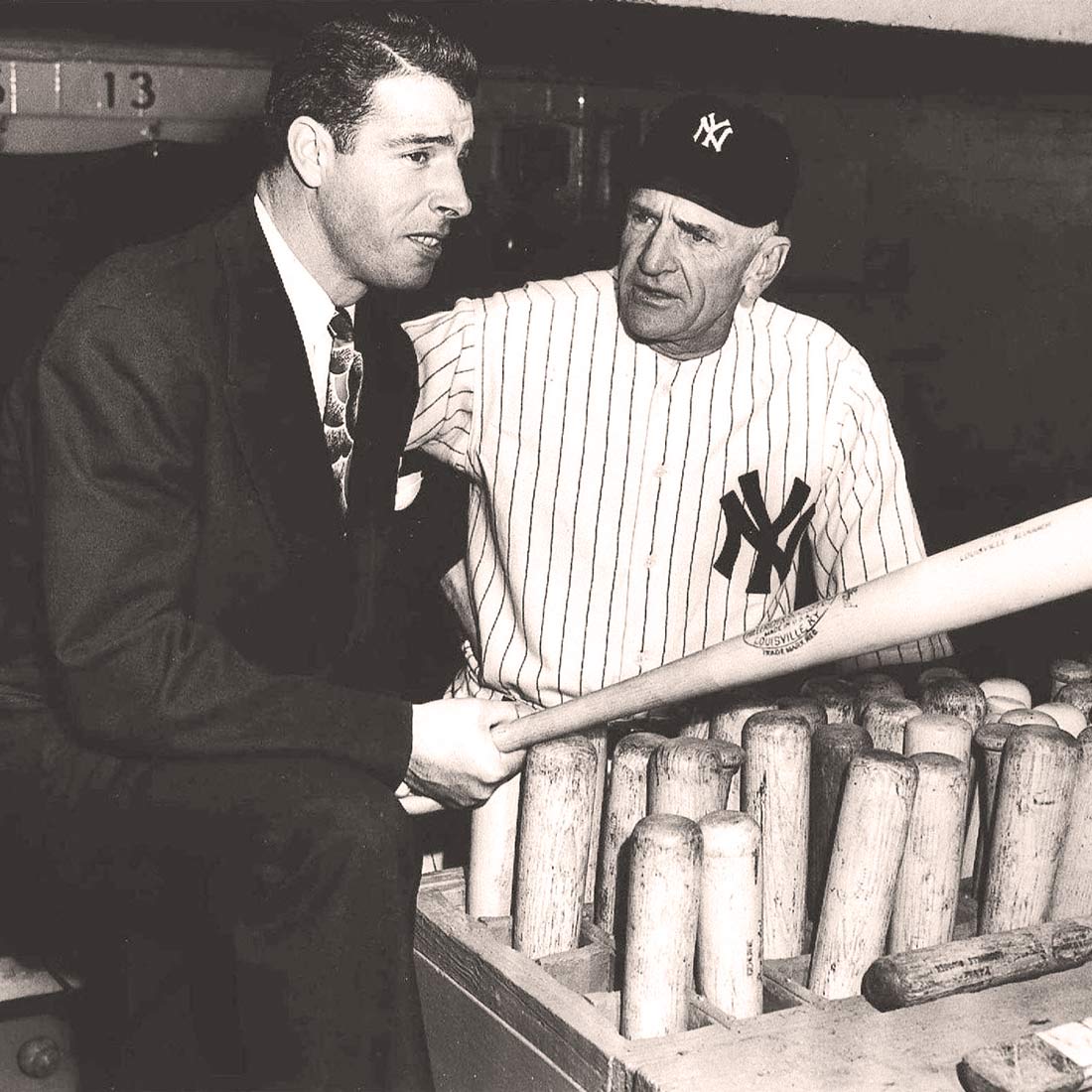 The Yankee owners signed him to a $100,000 season contract for the 1951 season, continuing his position as the highest paid player in baseball. But now he was 36 and would have to share the spotlight that season with a new Yankee phenom, 19-year-old combination of blazing speed and unusual power, Mickey Mantle.

Nineteen-fifty-one was a disaster from beginning to end. DiMaggio never got started and unlike the previous season was unable to put on a burst of hitting and power. When the Yankees came to Philadelphia early in the 1951 season, I went out to see him. Even as a naïve fifteen-year-old, I could see something was wrong. He just didn’t look right, and his swing seemed slower to me. By the next time the Yankees came to town it was obvious he was going downhill. I never went to another Yankee game that season. I found it too sad.

In 1951, DiMaggio would hit for the lowest batting average of his career, .263 with just 12 home runs. Although he helped the Yankees win another World Series that season—this time against the cross-town rival New York Giants – coming off the greatest comeback in baseball history to win the National League pennant over their hated rivals – the Brooklyn Dodgers on Bobby Thomson’s dramatic ninth inning homer—DiMaggio knew he was through.

If he had any doubts about the decline of his skills, an evaluation of him by a scout for Brooklyn must have gotten his attention. The scout outlined DiMaggio’s decline: he can’t throw hard, runners can take an extra base on him and what must have really hurt, he can’t pull a fastball any longer.

In December 1951 despite the offer of another $100,000 contract, DiMaggio announced that he had played his last game. “When baseball is no longer fun,” he said of bowing out, ”it’s no longer a game.”

DiMaggio’s baseball record speaks for itself. His 56-game hitting streak—after being stopped—he hit in 16 more games—remains one of baseball’s unreachable records. Although his statistics no longer match up with the great power hitters of baseball, especially those from the steroid era, his career was a remarkable one. He played in ten World Series with the Yankees and they won nine of them. Anyone who knows baseball recognizes that he played an important, if not key role, in those victories.

John P. Rossi is Professor Emeritus of History at La Salle University in Philadelphia. His most recent baseball book is: Baseball and American Culture: A History, Rowan & Littlefield, 2018