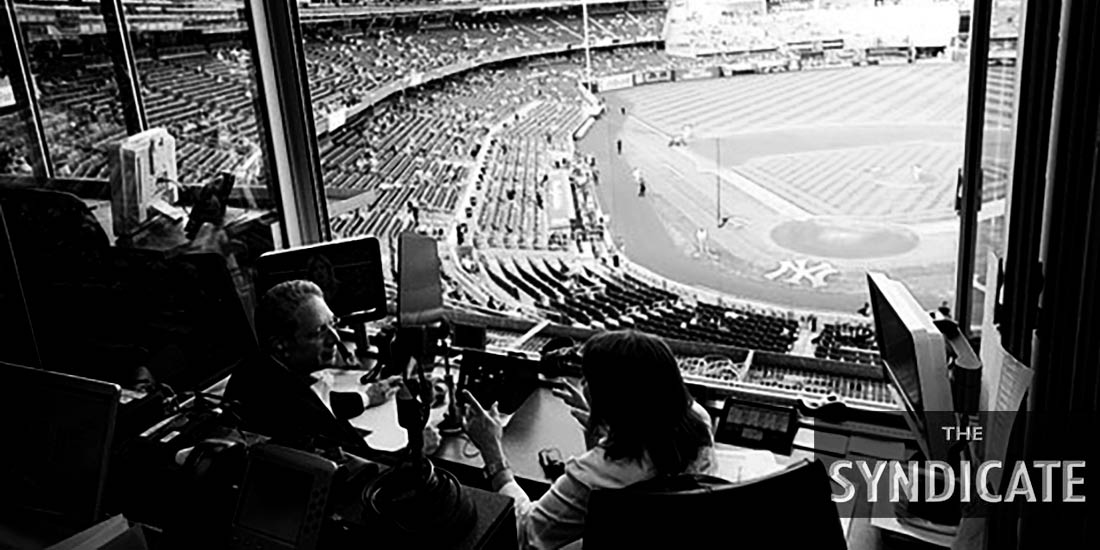 Every baseball fan has their favorite radio and television broadcasters, whether they’re play-by-play announcers or color commentary providers or, as we now call them, baseball analysts.

For the most part, color commentary providers or baseball analysts are former players; while play-by-play callers tend to be people with a background in broadcast media. A notable exception is the radio booth for the New York Yankees, with John Sterling calling play-by-play and Suzyn Waldman providing color commentary — neither of whom have ever played professional baseball. But both Sterling and Waldman have lengthy histories of broadcasting Yankee games and have etched a place in the hearts of many a Yankee fan over the years.

Recently it was announced that two of the main cast of the Yankees’ YES Network television booth will be broadcasting Sunday Night Baseball (SNB) on ESPN this coming season. David Cone is set to join the main ESPN SNB broadcast, alongside Eddie Perez and Karl Ravech, as an analyst and Michael Kay will be joining Alex Rodriguez on ESPN2 to cover eight games “Manningcast style.”

The Kay-Rodriguez show has been dubbed “Kay-Rod” and will apparently also announce two games as the main broadcast on ESPN during the season.

This will be eating into Cone’s schedule as analyst on YES; it’s been announced that he’ll only be present in the YES booth for 50 games this coming season instead of his usual 100 or so. 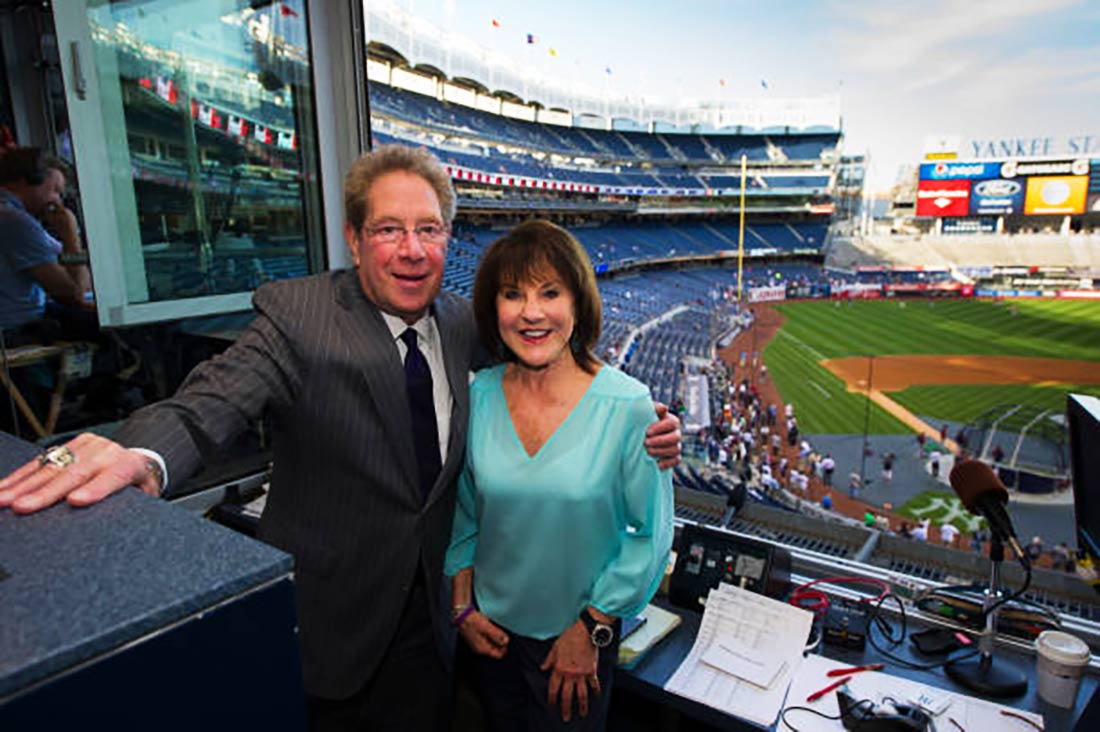 Judging by social media reaction to the news, Yankee fans are both excited for Cone and Kay and yet disappointed the new ESPN opportunity will remove Cone from the Yankee booth as much as it appears it will. Both are fan favorites — and there’s a storied history of pitching for the Yankees in Cone’s case, and a history of broadcasting the radio show with John Sterling (prior to Suzyn Waldman) in Kay’s case. Given that the Yankee television booth has recently also lost Ken Singleton to retirement, Yankee fans could be in for a new look TV broadcast for at least part of the time in the upcoming season.

A mainstay in recent years of the Yankee TV broadcast has been Paul O’Neill, former outfielder and World Series winner for both the Cincinnati Reds and the Yankees. One has to think the YES Network will lock him in for at least as many games as he’s covered previously, and perhaps even more — given that Cone’s presence will now be reduced by about 50 percent. Cone’s persona’s been known to be a mix of the baseball past and present, providing commentary that reflects both his own story with baseball and MLB as well as present day analytics and newer perspectives on the game. O’Neill, on the other hand, besides providing a fair sized helping of comic relief on the broadcast, brings the perspective of on the spot, real-time observations and significant suggestions about the mechanics and mentality of hitting and fielding. The Kay, Cone, O’Neill combo over the past number of years has hit the mark from the fans’ point of view; they’re popular and well regarded. Breaking up the band, if that becomes necessary for YES, might not be that easy. One expects that Ryan Ruocco, who has filled in for Kay in the past during a health leave of absence and at other times, may be awarded a stepped up role on the broadcast. And judging by social media response to Ruocco, he’s both well liked and viewed as a quality play-by-play announcer by Yankee fans. 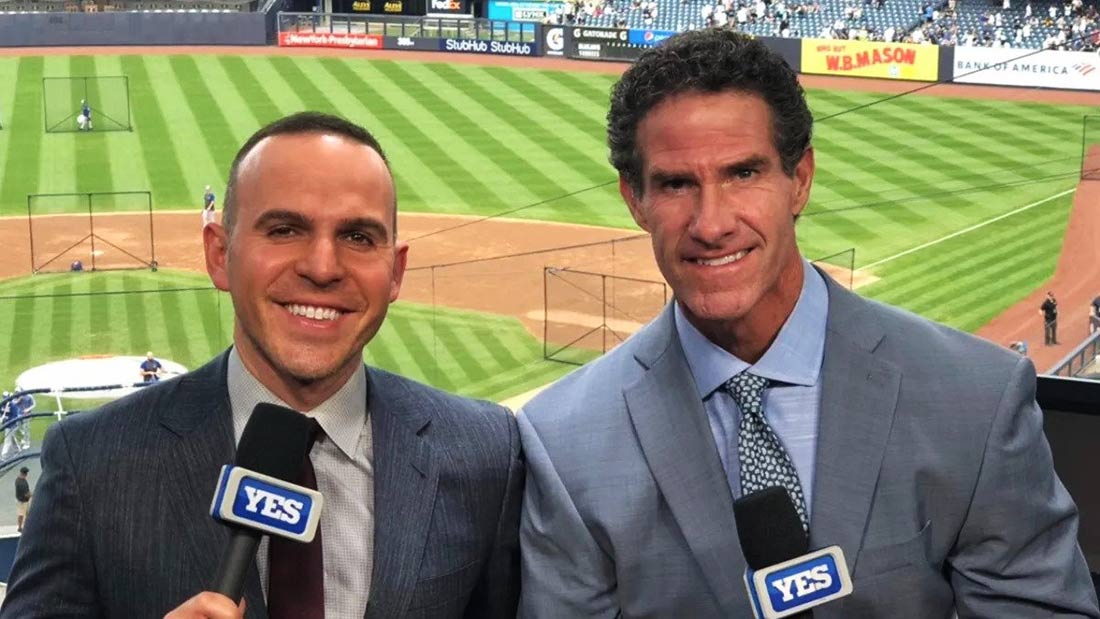 As one of the most iconic franchises in sports, no matter whom the Yankees have in the booth, their quality assurance of the broadcast has to be top notch.

The larger context surrounding the Yankee broadcast booth, whether radio or television, includes their crosstown “rival” Mets broadcasters. Consistently voted by multiple fan polls as among the very best television booths in baseball, Gary Cohen, Keith Hernandez, and Ron Darling of SNY-TV have set a high enough standard for New York City baseball announcing that it behooves the Yankees and the YES Network to meet it as closely as they can. And Howie Rose of the Mets’ radio booth is a legend in his own right; with a history of calling hockey for both New York City teams and many years as both the television and radio voice of the Mets.

Of course, there’s a legendary history of announcers and analysts for Yankee games that goes back decades. Phil Rizzuto, or Scooter, as he was nicknamed in his youth, was the longest serving Yankee broadcaster to date at 40 years. Rizzuto, having been a popular Yankee shortstop (with the retired number of 10), was equally popular as a game caller for the Yankees. Rizzuto was famous for cannolis showing up in the booth during the game — and making sure to let his audience know it. He partnered with Bobby Murcer for 22 years, another famous Yankee, and the two really enjoyed each other’s company (and again, the audience knew it).

John Sterling’s been broadcasting for the Yankees for 33 years, while between radio and television, Michael Kay’s been at it for 30 years. Ken Singleton, whom we mentioned earlier had retired this past year, served in the Yankee television booth for 25 years. Ken Singleton never played for the Yankees; he played for the Mets, Expos, and Orioles — yet Singleton was born in Manhattan and grew up in Westchester, NY as a Yankee fan. Extremely popular with Yankee fans, Singleton is sure to be missed and won’t easily be replaced. 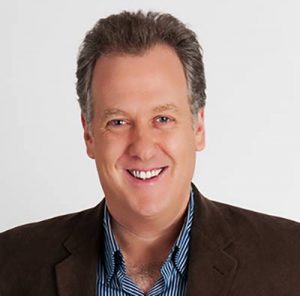 Prior to Phil Rizzuto, undoubtedly the voice of the Yankees was Mel Allen. Allen initially broadcast games on the radio, but later called some games on television, as well. Mel Allen actually became known as “The Voice of the Yankees,” during his 20-plus years as the primary Yankee play-by-play caller. Whose voice fans hear in their heads calling Yankee games is generational; and each game caller’s known for certain catch phrases that have become part of their broadcasting identities. For Mel Allen, some of those included “That ball is going, going, gonnnne!” and “Three and two. What’ll he do?”

Rizzuto’s catch phrases included “Holy cow!” and “Think he’s on the bridge yet?” (referring to the George Washington Bridge in uptown Manhattan). Ken Singleton’s catch phrases included “Look out!” when a ball was hit foul near the broadcast booth or near a fan’s head, and “That ball is gonnne!” Michael Kay’s known for his fair share of catch phrases, as well; including “The hitter’s ready; the pitcher’s ready. Let’s do it!”; “Do the Yankees have a rally in their bones?”;  and “Well, it’s bonus cantos. Free baseball, everybody!” But perhaps most famous with current Yankee fans is John Sterling’s catch phrase “That’s baseball, Suzyn.” Tee-shirts have been printed with the slogan and it’s become known throughout baseball circles as the phrase to use when a baseball phenomenon can’t really be explained. 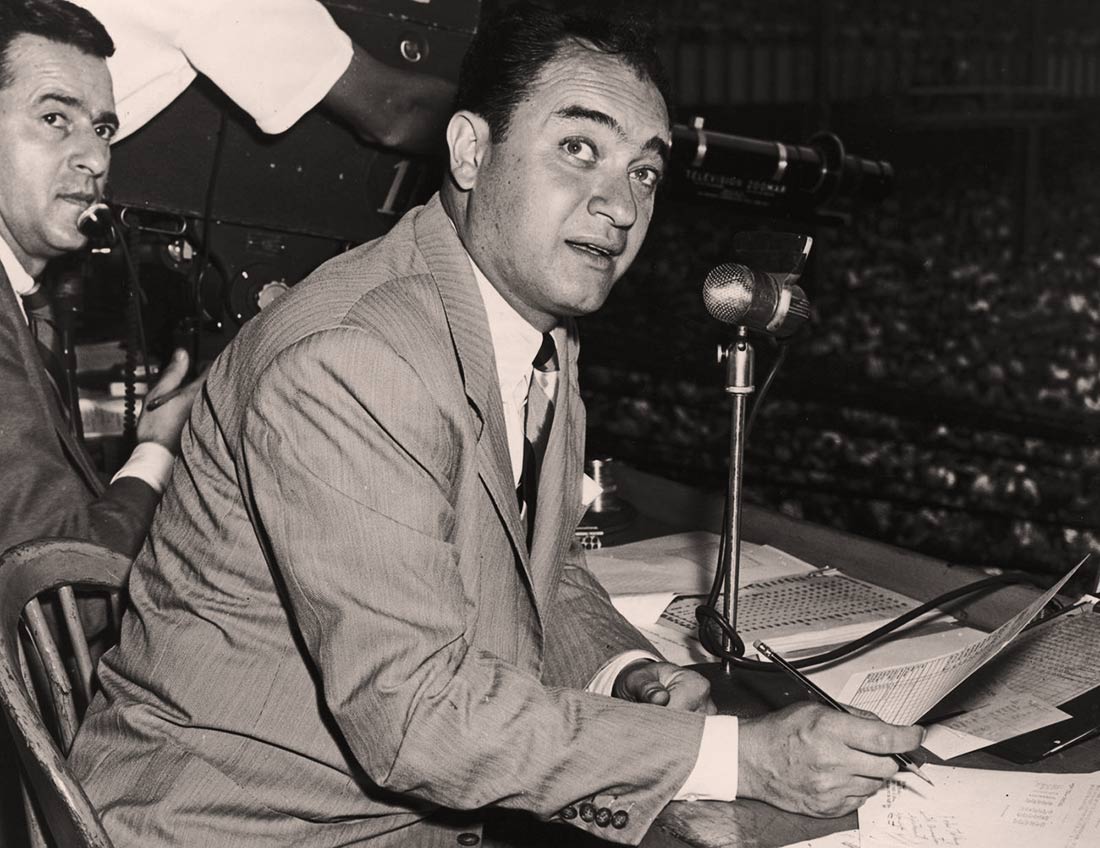 Circa 1955: American sportscaster Mel Allen (1913-1996) looks up from his desk in the broadcasting booth during a sporting event. Another unidentified sportscaster and a television camera are visible at left. Part of the stadium audience can be seen through the booth's window. (Photo by Hulton Archive/Getty Images)

Representing a large market team and competing with another team in the same city, the Yankees, the YES Network, and any radio affiliates can’t afford to make a mistake when it comes to their radio and television game announcers. And as there are thousands of Yankee fans both domestically and globally, and internet streaming options available as well, each game reaches viewers and listeners by the thousands who live outside the New York City area.

As one of the most iconic franchises in sports, no matter whom the Yankees have in the booth, their quality assurance of the broadcast has to be top notch. There have been announcers who haven’t lasted very long; some have left of their own volition — but others have been asked to leave because they simply didn’t strike a chord with the Yankee viewing or listening public. I recall a time when I was still living in New York City and wasn’t very enamored of one of the broadcasters the Yankees (and MSG Networks at the time) had employed for a couple of years. I wrote a letter to the Yankee front office complaining about him. I can’t imagine that was the only negative feedback they received, because he was gone the following season.

In light of the opportunity now being given to Cone and Kay, we have to wonder what the Yankee response to filling their slots at the necessary times will be. There are former players who cover the Yankees primarily in the YES Network studios, so perhaps they’ll see more game coverage time. Perhaps Ryan Ruocco will see more play-by-play time. Perhaps Paul O’Neill will see more color commentating time. Or perhaps some fresh talent will be introduced.

One thing we do know, however, is that it’s the Yankees; and their fans don’t hold back. So whoever ends up in the hot seat won’t only have some very large shoes to fill — you can be certain they’ll definitely hear about it if they don’t. 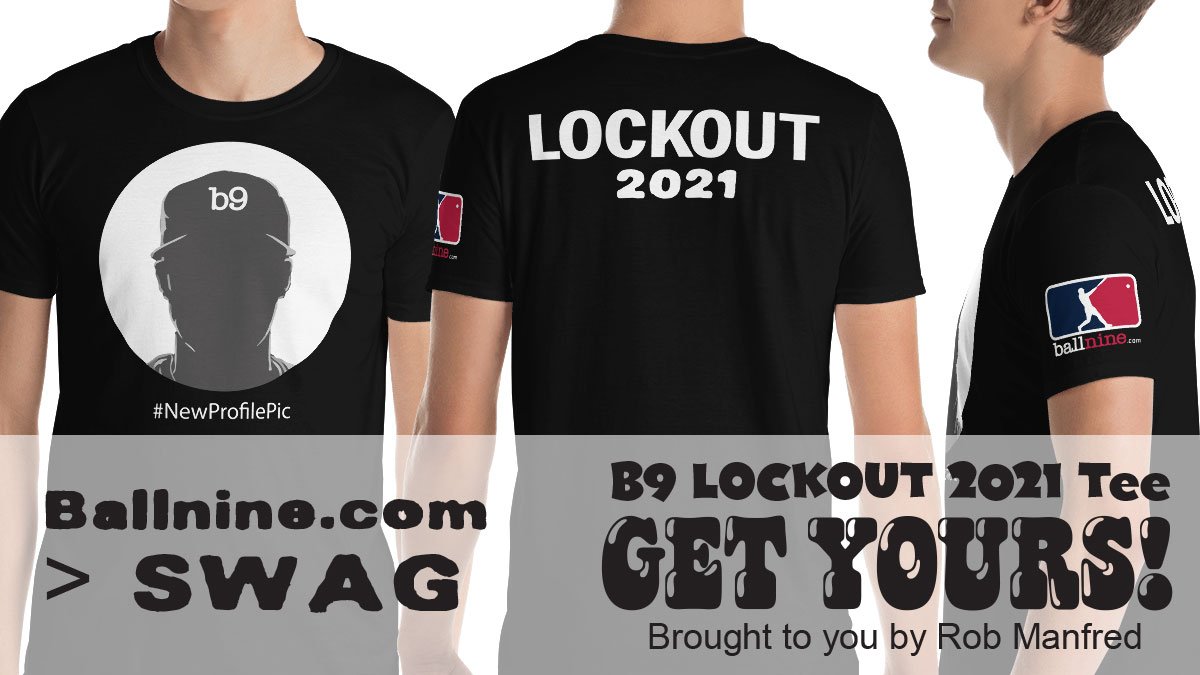 previous article
Dick Allen’s Journey
next article
This Is It 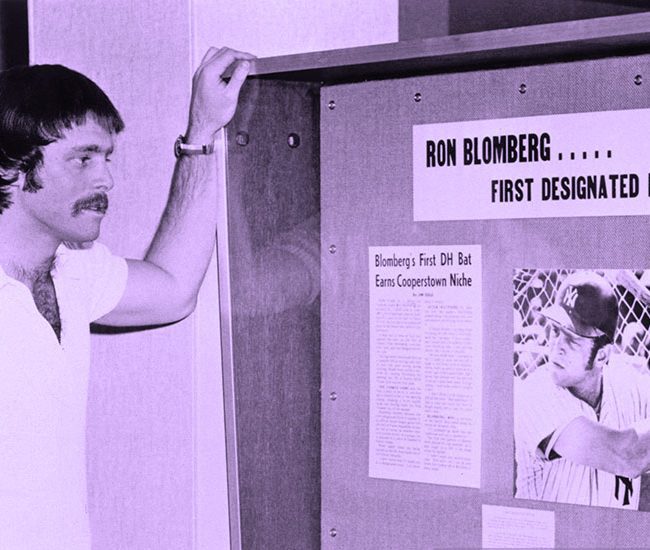