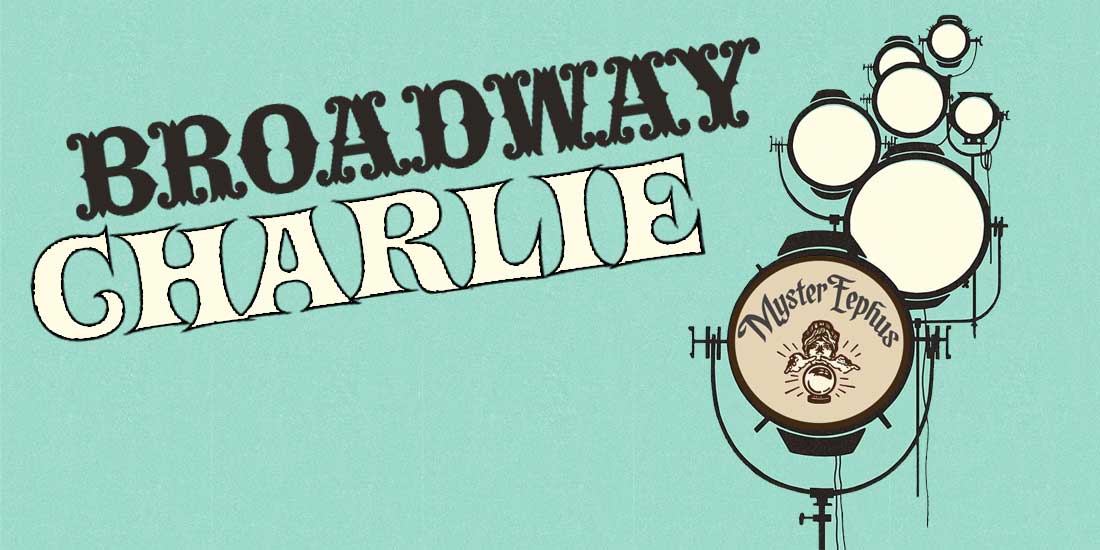 Charlie Wagner had two claims to fame: while a pitcher for the Boston Red Sox, he was Ted Williams’ roommate, and in the 1960s, Esquire magazine named him one of the 10 best-dressed men in America (his nickname was “Broadway Charlie”).

His long life in baseball and sharp memory enabled him to discuss Williams, Jimmy Foxx, Carl Yastrzemski, Roger Clemens and Nomar Garciapara from a personal perspective few people had.

“Ted Williams never looked back at an umpire,” recalled Wagner. “Little things like that stay with you.”

While looking for a tape cassette, I came across one marked “Charlie Wagner.” He was 84 at the time we spoke, so it was probably done in 1997. Wagner discussed several topics, but primarily about scouts and scouting, the people who, he said, “put the players on the grass.”

“We were on the road, scouts (are) on the road all the time, and they’re in and out, and up and down and they travel and travel. A lot of scouts have a very lucrative area, like Florida, Texas, California. Then there’s a lot of scouts who don’t have lucrative areas, in the East, the Northeast, so it takes different types of scouts to do that type of work,” he said. “You have to scout sometimes quickly in the east, rather than Florida, (where) you can see them all year long, so for some guys signing … the (top) ballplayers out of California, and Florida, because the players pick schools (that play) practically all year long,” he said.

Sometimes a scout might not sign a ballplayer for a year or two, “but then a Nomar Garciaparra is discovered,” he said. 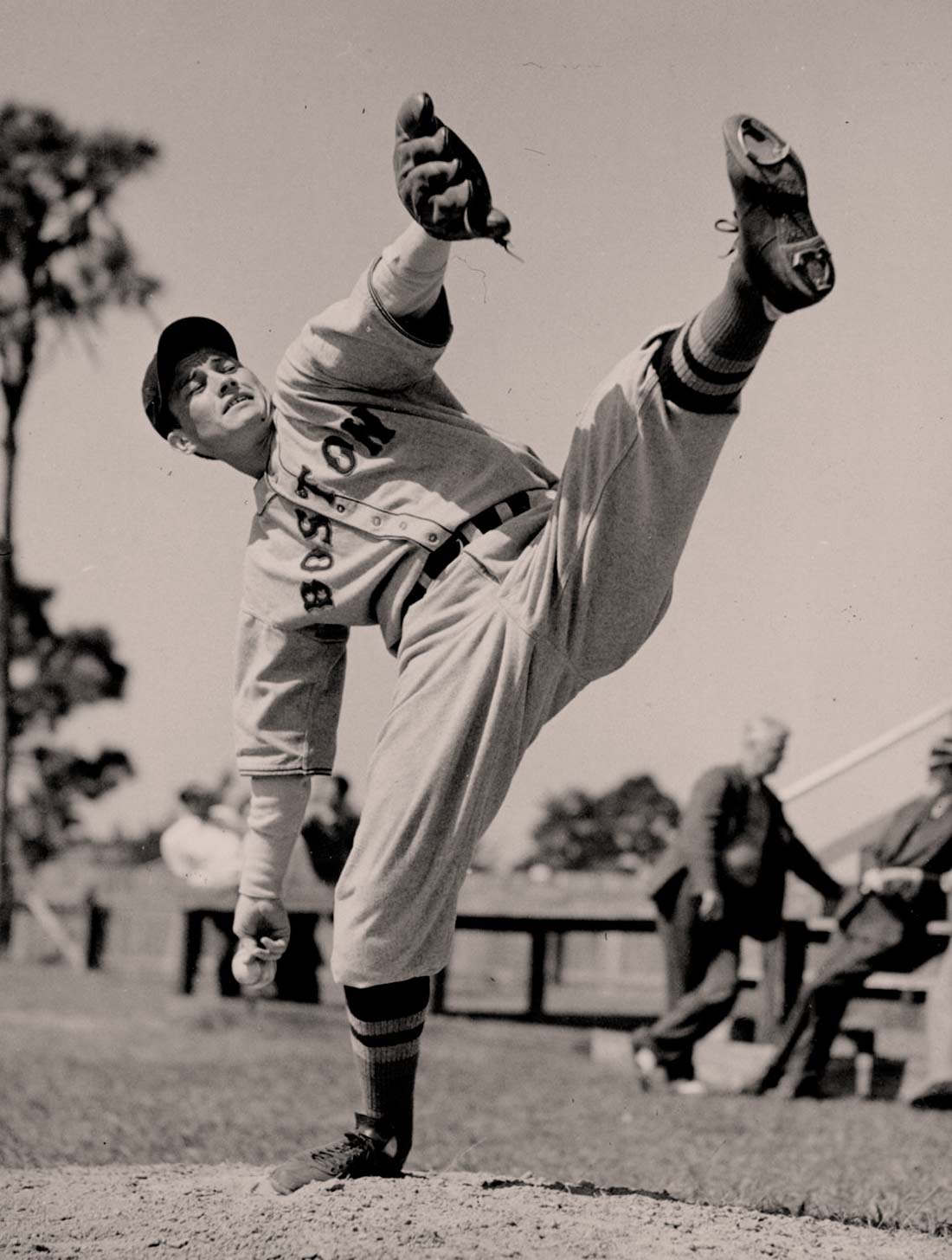 Charlie Wagner pitched for the Red Sox for six seasons in the 1930s and 40s before moving into the front office and eventually working as a scout. (National Baseball Hall of Fame and Museum)

Here’s how a biography of Wagner from the Society for American Baseball Research began:

“Charlie Wagner served the Red Sox with a continuous tenure longer than any other person before or since. From his signing in 1934 to the day he died while scouting for the Red Sox in the summer of 2006, Wagner could count more than 70 years with the Sox – excepting only the three years he spent in the United States Navy during World War II. Charlie was born in Reading, Pennsylvania, and died in Reading. And he was first signed to the Red Sox at Lauer’s Park, Reading, in 1934.”

He retired following the 1946 season, and joined the Red Sox minor league system, where he was its assistant director for many years. In his eighties, he was a special assignment scout for Boston, evaluating players in the AA Eastern League and occasionally scouting the Phillies and Pirates. He had one piece of advice for anyone interested in scouting: “You have to marry the right woman.” Charlie did, a woman from Reading.

“She knew how I made a living, and she enjoyed parts of it, like spring training, I had most of the winter (off) to myself”. She had to find ways to handle the loneliness, he said, and the birth of their son after nine years of marriage helped that.

By the time I met him, Wagner was a fixture in the press box, sitting in a comfortably cushioned chair at Reading Municipal Stadium (Now First Energy Field). In 2000, the press box was named for him. Boston honored him by naming a street in their spring training complex “Charlie Wagner Way.”

At one point, Boston had 12 minor league teams across the country, and Wagner went to all of them. The Red Sox had a farm team in Harlan, KY. When a hotel employee spotted the well-dressed scout, she told him to take off his tie.

Wagner said she told him this while “spittin’ in a spittoon; wish I had it, it’s an antique.” He asked her why she suggested he remove his tie.

Harlan was in coal country, and the men who owned and ran the mines were not popular.

“She said, ‘people will think you’re a revenue man, then you won’t be seen for a while.’ Whether it was true or not, I didn’t wear a tie the whole time I was there and didn’t see anyone in the town wear a tie,” Wagner recalled.

People in Reading remember him as “super professional,” who always dressed in a full suit, whether it was raining or 90 degrees. 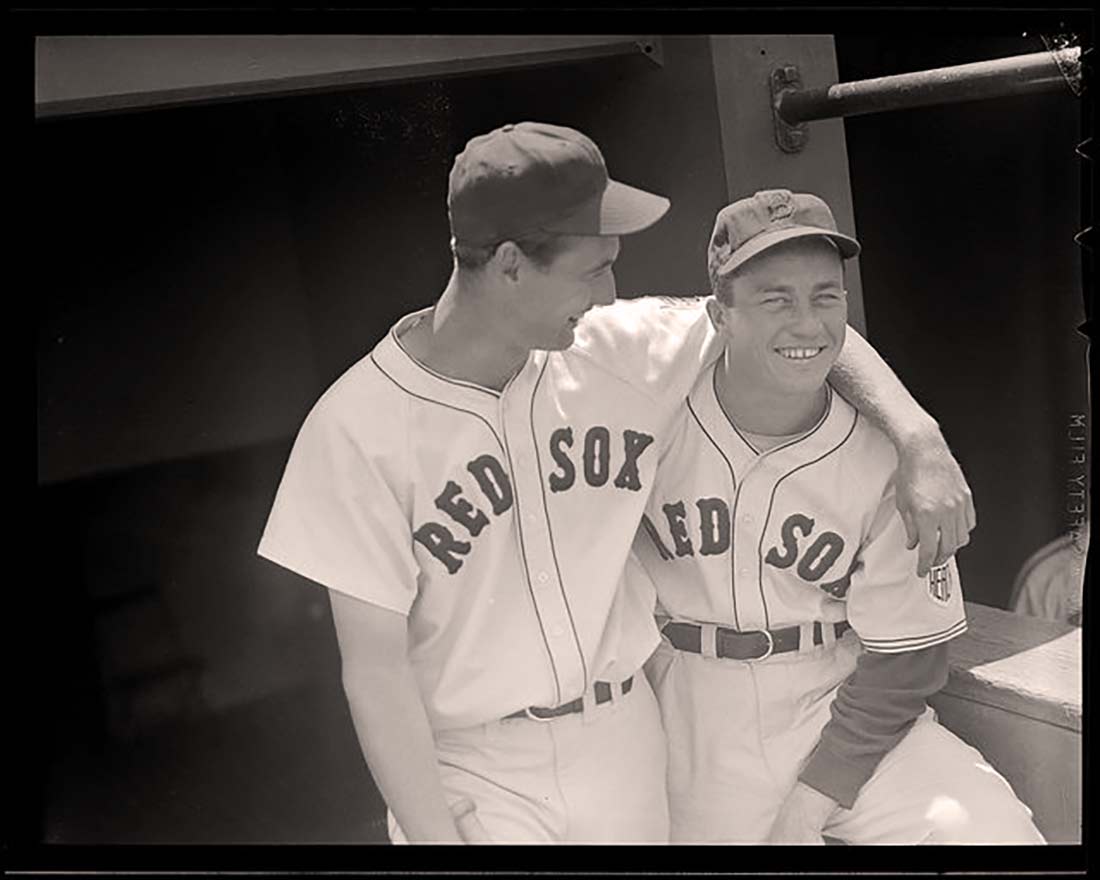 Ted Williams and Charlie Wagner in the Red Sox dugout, 1942.

He had seen players grow rich with free-agency and revenue streams bringing billions into the sport, but that largess has not found its way to scouts.

“They’re the most underpaid” professionals in the sport, he said. “What they get they earn, and they should get more. I think they earned every nickel. What we do is we give them cars, every two years they get a new car. All scouts put 60,000 [miles] on the next year, used to wear out your own car,” he said.

One of the biggest changes in scouting was the adoption of the baseball draft. Previously, a scout would see a player they liked and tried to sign him, often competing with scouts from other teams. For high school players, said, “If the parents liked you – you were in.” Wagner tried to determine if the parents were “front room people” or “kitchen people.”

“If they were front room people, you’d sit in the front room – but if they’re kitchen people you’d sit around and say let’s have another piece of pie,” he said. Some fathers came in with bare feet and he knew he was front room people. “You’ve got to know when you go up in there,” Wagner noted.

He talked about a Red Sox scout named Bill Enos, “If he’d liked the boy, he’d go over there 9, 9:30, have a cup of coffee, he took an afternoon nap. He’s now talking, and he’s a great talker, the old man is sitting there, and he’s falling asleep, and he has to go to work. Give me the papers, I’ll sign, anything to get him the hell out. Those were some of the little tricks that you do,” said Wagner. 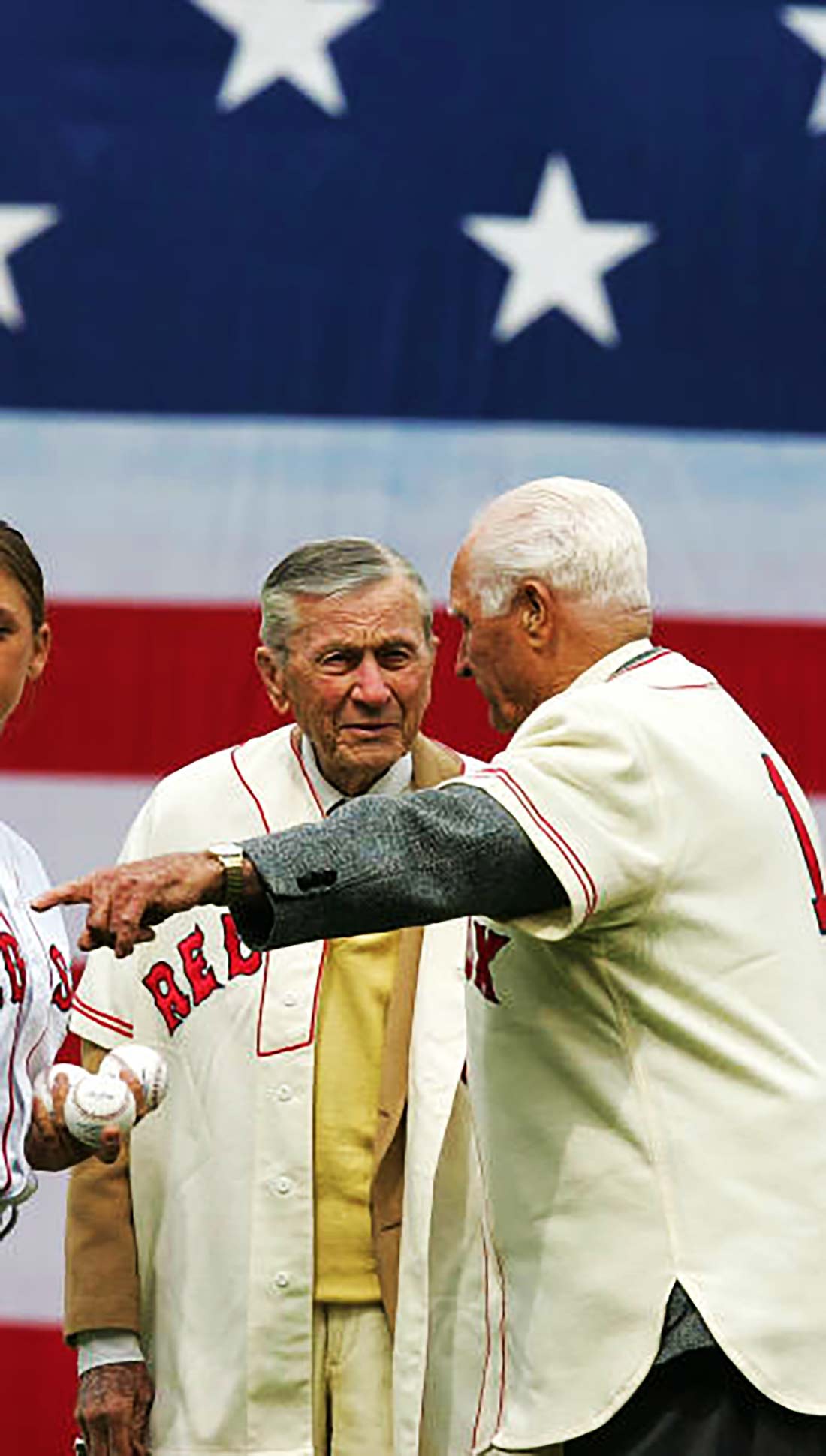 Red Sox greats Charlie Wagner left and Bobby Doerr get ready to throw out the first pitch before the Red Sox kick off the 2006 season vs the Toronto Blue Jays at Opening Day at Fenway Park Tuesday, April, 11 2006. (Photo by Matthew West / MediaNews Group/Boston Herald via Getty Images)

One mother had been taken out to dinner by rival scouts several times. Wagner sized her up as a living room person. “I told her I wasn’t going to take her out to dinner, and she thanked me.”

He also felt statistics “didn’t always tell the truth. They don’t always tell what pitchers are better ahead or behind (in the count), sometimes that’s what you have to judge; who has the grinding. I pitched against Lefty Grove, Ted Lyons, and boy, when they were one run ahead, you had to fight; those are the type guys you look for, look for a grinder at the plate — who would you not like to face in the clutch? You see the sawdust come off their bat, you recognize that immediately. That’s the type of scouting you need, who is the grinder. Kids like (Nomar) Garciaparra, Mo Vaughn, grind it out every day,” he said.

“I went there,” the attendant said. And he proceeded to tell Wagner how to find it:

“Wait a minute, am I going left or right?” said Wagner. \

That’s the type of story scouts tell, what it’s like on the road. Like truck drivers, scouts know where the best restaurants in an area are, what are the best hotels, and what high school coaches really know if they have a prospect as opposed to a coach who loves all his players.

“There are good scouts who can see deep into a guy, see the heart, they see through a guy, scouts …scout the outside, have to see the determination,” he said.

He told about how Eddie Kasko, a former Red Sox player and manager who also scouted. He evaluated two teammates pitching for the University of Texas, Roger Clemens and Calvin Schiraldi.

“Kasko was asked which one do you want? He said Schiraldi looks like he’s the most (polished), but I want Clemens because Clemens has heart, he wants to win, he wants the ball, he hates to lose; not that Schiraldi didn’t, but (Kasko) kept saying Clemens. That’s the good scout. It isn’t easy, it’s a tough thing, every day, every day, looking at a lot of kids and colleges, it’s a hard life, a hot dog and hamburger world,” he said. 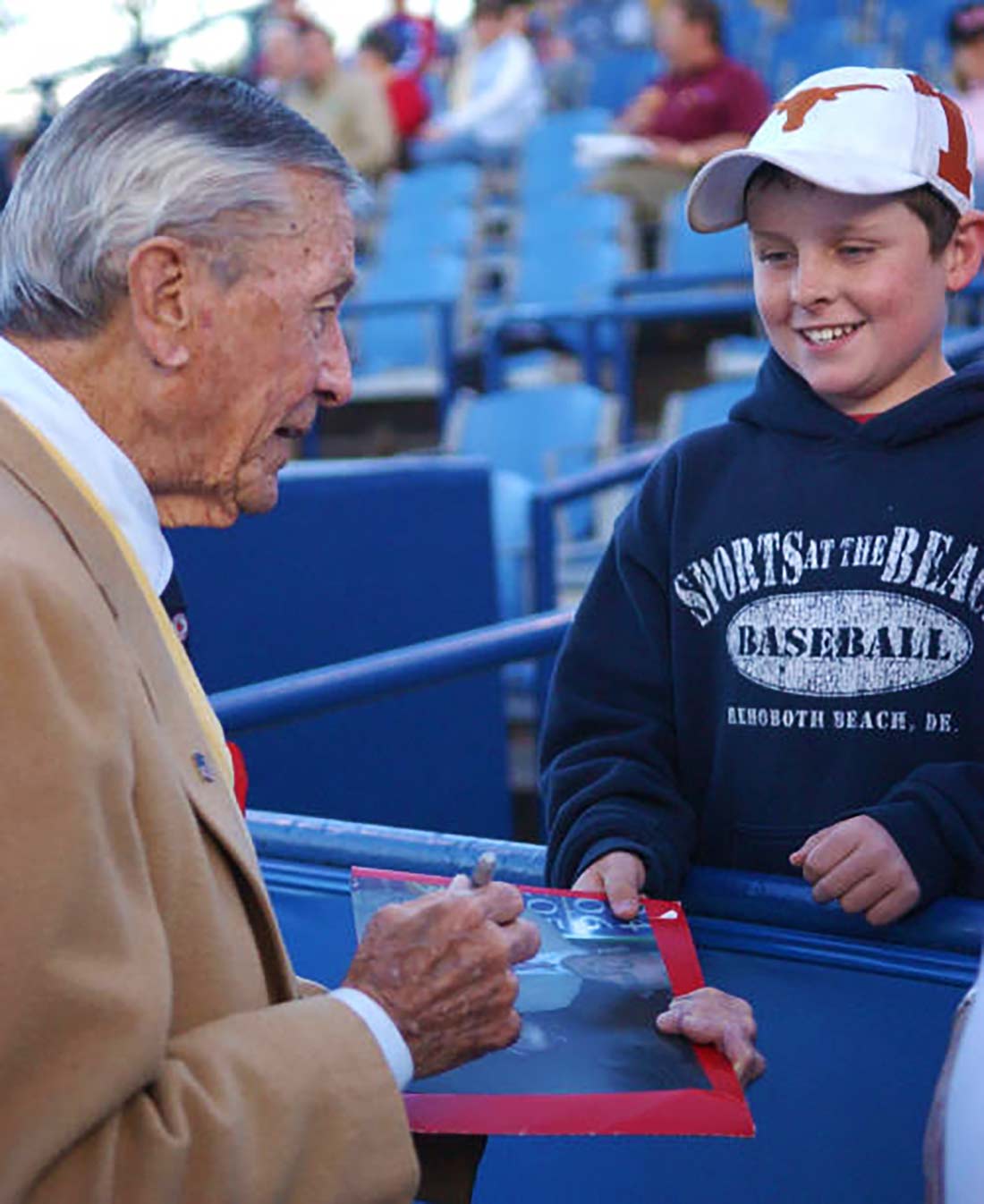 ``Broadway`` Charlie Wagner autographs a photo of himself for Angelo Kelly, 11 in 2006. (Photo By MediaNews Group/Reading Eagle via Getty Images)

But a few minutes later, Wagner said of scouting:

“It’s a beautiful job, a great job, and you wouldn’t want anything else, but like I said, your wife has to understand the business you’re in,” he said. “Guys come from baseball into scouting, and there are scouts [who] didn’t play too much of it, had a touch of it, best to have a baseball background in order to be a good scout.”

Aside from watching baseball, Wagner said scouts were busy with their pens, writing reports. “The mornings were taken care of and you had Legion games in the afternoon, you were writing all the time,” he said.

How did Wagner pass the time between games on the road behind the wheel, or on a train? “I’m dreaming I’m a millionaire, what would I do if I had $10 million, and I’m not kidding. I feel like I’m a millionaire anyway. (The game has been) good to me,” he said.

He died on August 30, 2006, of an apparent heart attack. He was 93. Wagner was stricken after attending a Reading Phillies – New Britain Rock Cats game. Reading Police Capt. Francis Drexler said Wagner was found in the passenger seat of his car in the parking lot at FirstEnergy Stadium, where he had earlier participated in an awards ceremony.

It was fitting he passed away after watching a baseball game in his hometown.

previous article
It’s Time To Soar
next article
What About “Indian Bob”? 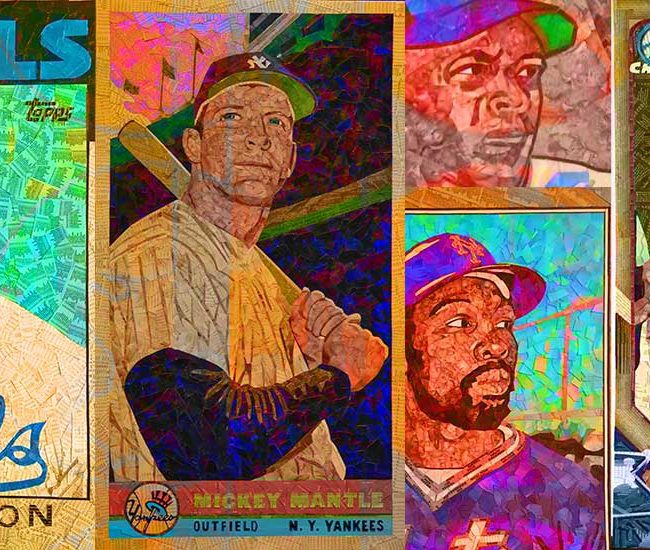 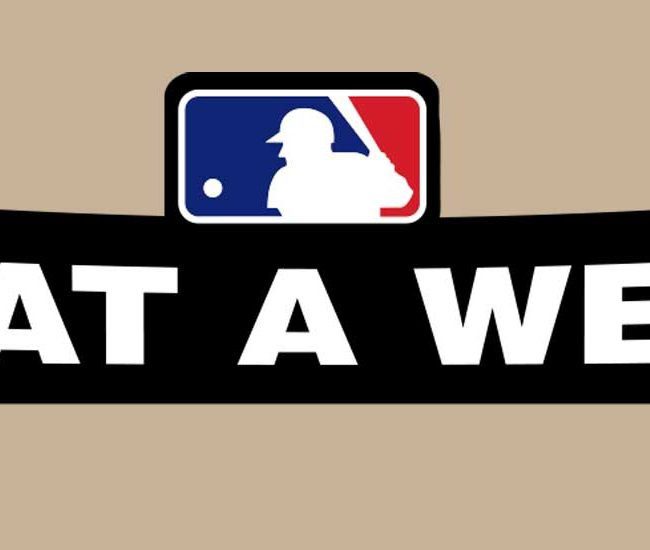