Accept the challenge that MLB and the players have thrown down in their fight. Both sides are dug in, as I predicted they would be so many months ago. On Day 69 of this lockout, it’s going to get worse before it is going to get better.

The fans are collateral damage. Accept that and simply move on. You don’t need to anguish about baseball right now.

The latest non-negotiations this week prove that, and both sides seem pretty intent on keeping the major league game away from the public for a while. For those who love to come to spring training – and who doesn’t love going to spring training – there will be a slight change of plans.

That’s fine. We will survive.

During this Covid mess of the last few years, we have shown a resilient attitude. We have all learned to adjust. Make this baseball adjustment as well. Find something else to do with your time and also find another outlet for your baseball energy as I did on Saturday.

You can do it, too. AMBS offers this advice.

There are plenty of baseball games out there. I am fortunate enough to live in Florida so it’s pretty much baseball weather all year, even in Northern Florida, where I live. Since MLB spring training is on hold, go somewhere else to find your baseball.

Find a game, any game.

“You are a baseball fan. Act like it. Find baseball. In some form. Live action, even on YouTube or in a book.”

That was my challenge on Saturday and that is how I wound up at the season opener for Flagler College, a D-2 program, hosting Queens University of Charlotte at Drysdale Field in St. Augustine. Queens University is where Jack McDowell coached a couple of years ago. McDowell produced a 12-year major league career, with the right-hander posting a 127-87 record with a 3.85 ERA.

Baseball at any level is fun to watch. That cannot be taken away by those in charge of MLB, including Rob Manfred.

For Flagler coach Dave Barnett, who was inducted into the American Baseball Coaches Association Hall of Fame just this past month at its convention in Chicago, this was the start of his 35th season coaching the Saints. That is quite the accomplishment. I wrote about him in a column last year because for years he played for Eddie Feigner of The King & His Court Fame.

What keeps Barnett coaching college baseball through the decades?

“These are good kids and the game keeps you young,’’ Barnett told BallNine, a few minutes before first pitch. “You teach them everything you can but once the game starts, this is their game. Maybe we call a bunt, maybe we call a steal, but a lot of guys are own their own.’’

It’s about the game and this was a good game with Queens University scoring two runs in the top of the 10th and Flagler battling back with a run in the bottom of the inning before losing, 4-3.

Again, give me a good game at any level and I will enjoy the experience. The time flies. The same goes for the rest of the fans and parents here on this day. It’s baseball. It’s supposed to be fun.

The day began with a player from each team taking part in a code of conduct pledge over the PA system before the National Anthem. The student/athletes pointed out that this baseball field was an extension of the college classroom. 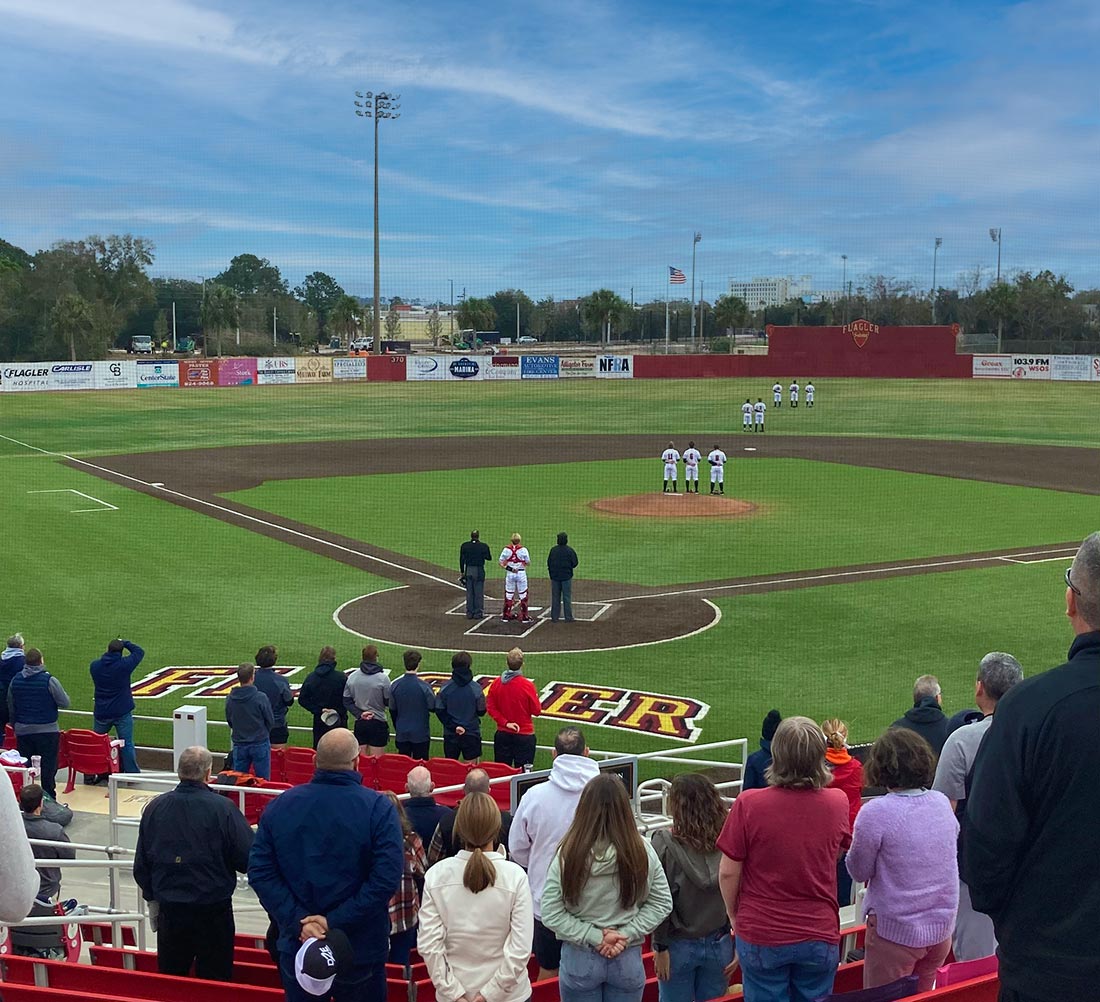 Then it was time to eat. Unlike the major league product which can ATM you to death, I was able to get a large cheeseburger for only $4 at the Ballpark Bistro, located about 90 feet to the right of home plate. A hot dog is $3.50, popcorn is $2.50. Fries are $4. The fries seem to be everyone’s favorite, especially the kids at the game.

Both teams were happy to be playing a full schedule after a shortened Covid schedule each of the last two seasons. The energy level was high octane.

Excellent defensive plays were made by each team, two home runs were hit, one by each team, there were stolen bases, caught stealings, bunt attempts, catches made against the outfield wall 370 feet from home plate, and this being the generation of the Launch Angle, plenty of big swings.

To me, the most impressive thing was the pure joy on the field of simply playing baseball; running to first base your hardest, diving across the foul line to catch a a pop fly, racing home to score a run. College kids being college kids, and this was something I’m sure was prevalent throughout the country with the opening of the college baseball slate, it was time to let out some pent-up energy.

Most of us only see college baseball games on TV the weeks leading up to the College World Series. There are more than enough games to go see before then.

Perhaps, with the last two seasons of Covid, nothing is taken for granted anymore by players and parents. Just enjoy the heck out of playing the game.

When Queens University went ahead in the 10th on a triple, lined off the centerfield wall, their dugout exploded in cheers and wild celebration.

Yes, this was not a major league game, a spring training game or even a minor league game, but it was a baseball game – and it was a pleasure to watch live as the innings zipped by and it was well played; only two errors and the hustle was off the charts and so was the sportsmanship. The two umpires did a good job too, moving things along. 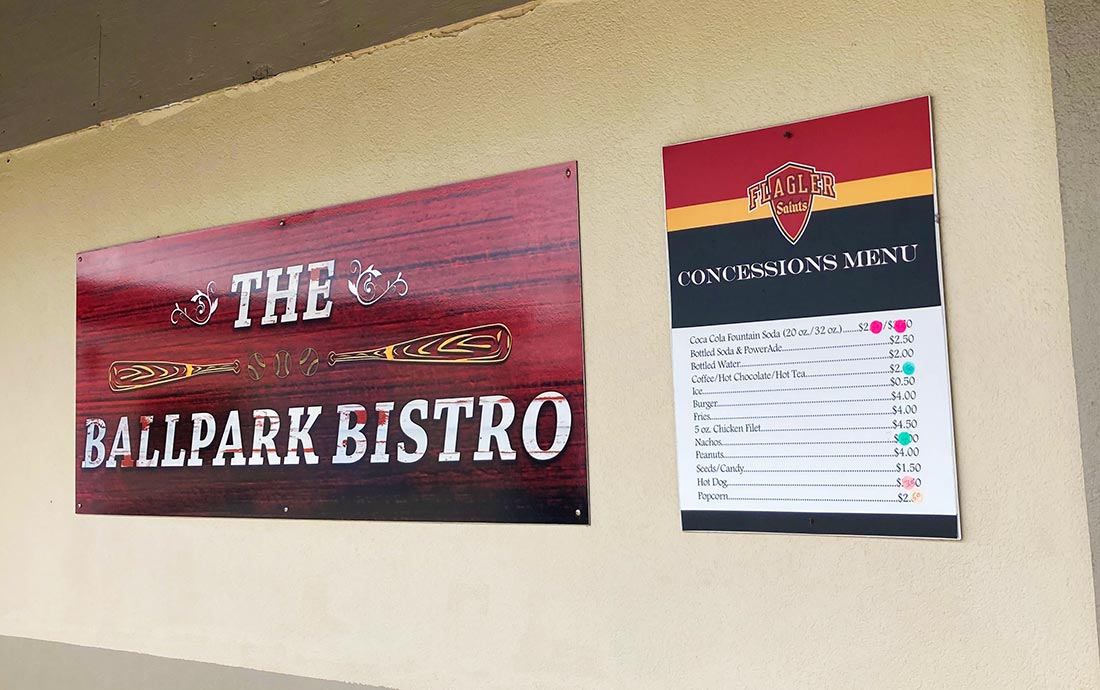 Get your fill at the Ballpark Bistro - without breaking the bank. (Photo by Kevin Kernan)

There was walk-up music as well and my favorite came from a Flagler batter named Myles Colangelo who went to the plate to the sound of Frankie Valli and the Four Seasons singing “Sherry.’’

That song was released back in August of 1962, their first No. 1 hit. I was nine years old then, living on 7th Street in Kenilworth, NJ. I probably first heard “Sherry’’ on a transistor radio on the Cousin Brucie Show while playing wiffle ball in the driveway or playing stickball up at Harding School.

Here at The Story, we always dig deeper.

Valli, a Jersey guy through and through and a big baseball fan, was thrilled. He told Negron he loves hearing his songs today in any fashion, in a film or anywhere: “Especially Sherry,’’ Valli said, “because it is so loved throughout the years. I love the fact that new generations are liking it.’’

You go to a baseball game, any baseball game, you never know what you are going to see or hear and on Saturday I heard: “Sherry, Sherry baby, can you come out tonight.’’

That simple walk-up song gives me hope for this generation.

I also noticed that two Flagler players, twin brothers Donovan and Griffin Garcia, each played their high school baseball at Steinbrenner High School in Lutz, Florida. The school opened in 2009, the last year the Yankees won a World Championship.

All in all it was a good day of baseball, even a bonus 10th inning, a tasty cheeseburger, a well-played game and a walk-up song I actually could sing the words to without have to enlist Shazam.

And that’s my point.

You can stay home and lament the billionaires fighting the millionaires over casino money, service time, arbitration, and the worst of the owners intentionally tanking seasons for a draft pick.

Or you can find a baseball game in your area and enjoy a couple of hours in the fresh air.

For you northerners, you either have to come south or go west or wait a month for live game action – and be sure to bundle up when the games do come north – but there are baseball games out there other than the frozen in labor limbo major leaguers, and these games are entertaining as well.

Don’t ever sell the game of baseball short.

Even when MLB comes back, try to think local on occasion. Take a new view to an old game.

Consider baseball in terms of like a Small Business Saturday. Instead of ordering from Amazon or a big box store (the major leagues) consider shopping for baseball at a small business: a college game, a high school game, travel ball or Little League. It might do you some good.

You are a baseball fan. Act like it. Find baseball. In some form. Live action, even on YouTube or in a book.

If that means re-reading the Roger Angell classic “The Summer Game,’’ like I’m doing now, do it. There are so many baseball books out there. How about “Casey Stengel Baseball’s Greatest Character’’ by Marty Appel or “True – The Four Seasons of Jackie Robinson’’ by Kostyra Kennedy or “Two Sides of Glory’’ by Erik Sherman or “Alou My Baseball Journey’’ by Felipe Alou with Peter Kerasotis or find a copy of my underrated Jack McKeon book, “I’m Just Getting Started’’ (I’m sure Trader Jack still has some boxes of books in his garage) or Tom Keegans’ “Sleeper Cars and Flannel Uniforms’’ or Rocco Constantino’s book “Beyond Baseball’s Color Barrier.’’ 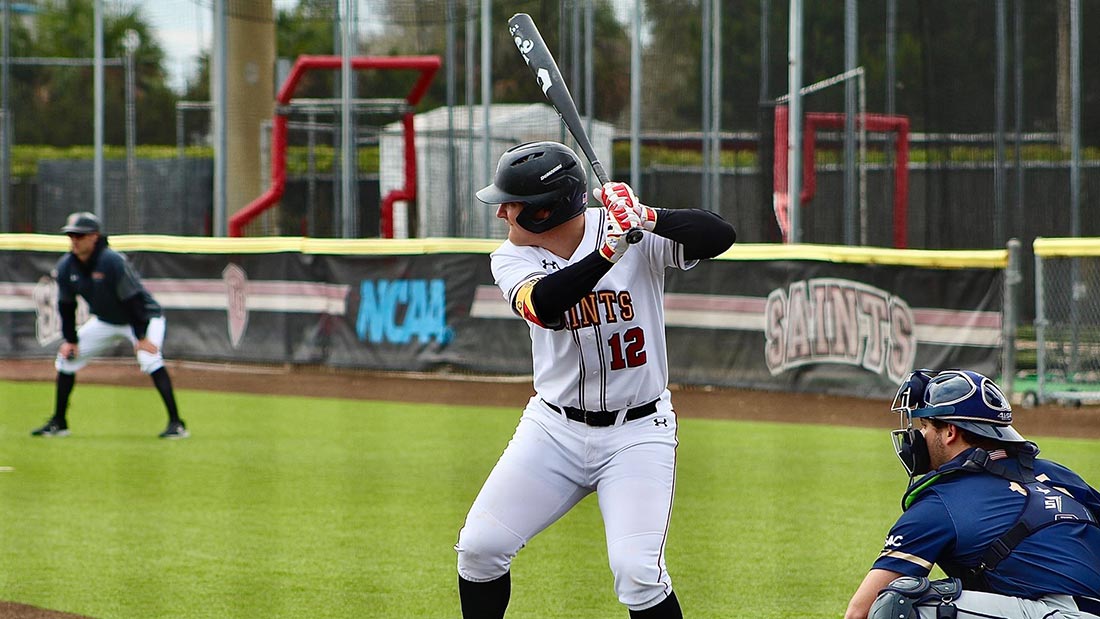 I’m also about to re-read “Veeck – as in Wreck’’ by Bill Veeck and Ed Linn, written back when owners realized the game belonged partly to the fans. If you want a really interesting perspective from a former player, I highly recommend “Old School’’ by grinder Ted Kubiak. There are many I’m leaving out and we can do a baseball books column next month. Let me know what you recommend.

There are so many different baseball avenues to travel and those are just some of the baseball books out there. Lots of videos and movies too. The point is baseball can be re-discovered in different ways. It’s not just about how they play the game today or the way it is not played before the lockout.

Here is one more oldie but goodie and the title fits with what is going on now: “Stolen Season: A Journey Through America and Baseball’s Minor Leagues.’’ The book was written by David Lamb, who noted, “I don’t think baseball is a metaphor for anything. It is simply the best game, the game where teamwork and individual performance are independent and interdependent … the game of perfect distances … Baseball endures because its myths and statistics endure.’’

As that great baseball historian Socrates once noted: “Fame is the perfume of heroic deeds.’’

Stolen Season was written 30 years ago, but all that Lamb wrote is still pretty much true. It’s about the game.

By the way, I see MLB, which is playing Big Brother now to Minor League Baseball, just increased the length of the AAA season from 144 games to 150 games “to better align with the major league season.’’ Wonder why they are doing that? Is that a message to the MLBPA that they are in this casino-money battle for the long haul?

It may be, but I don’t care right now. Let the two sides fight it out any way they want.

I’m busy and you can get busy, too. There are other baseball games to find. Along the way you may be surprised by some player’s walk-up music. 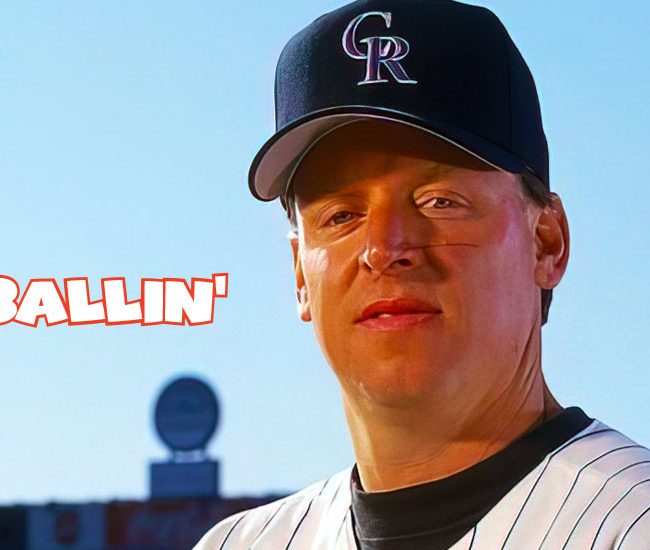 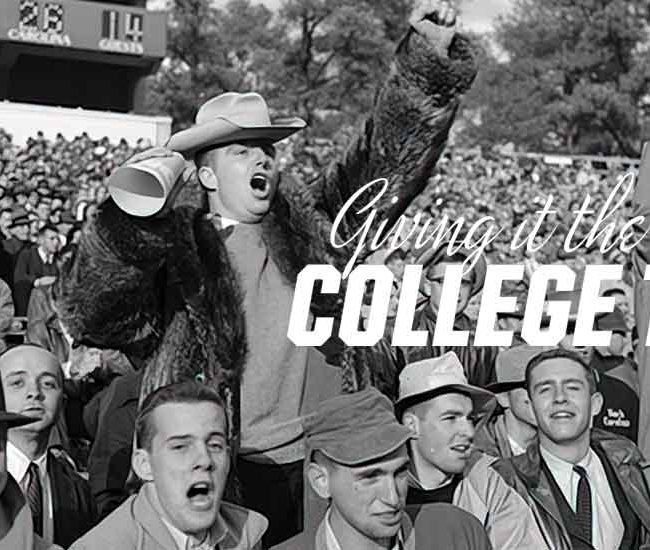 Giving it the Old College Try