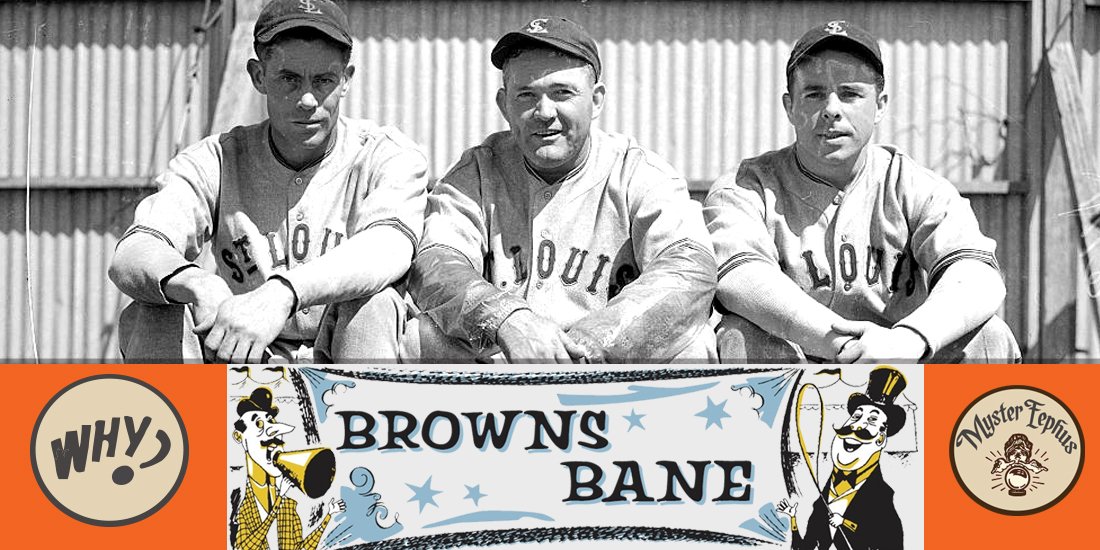 After 77 home games, the St. Louis Browns in 1935 drew a total of 80,932 fans, the lowest attendance figure for a major league team since 1900. Playing at the same stadium – Sportsman’s Park – the other team in the city the defending World Series Champion Cardinals, drew crowds totaling 87,000… in their first 15 home games.

On May 9, the Browns drew only 200 people in a contest against the Philadelphia Athletics, a 4-2 victory played in 1:45. In two other games, the team had only 300 and 500 baseball aficionados watching them. The Browns drew 16,000 in their first three games – one fifth of its total attendance. Take out those trio of contests at Sportsman’s Park and the club drew 64,932 in 74 games for an average of 877 ticket buyers. (That’s still better than a game the Browns played in 1933 in front of 33 fans!!)

Attendance was so low that year that St. Louis Browns President Louis. B. Von Weise thought about having night games in 1936, even though, “Night games were strictly taboo with me, but frankly, results obtained this year have made me stop, look and listen.” (The Browns didn’t play their first night game until May 24, 1940.)

“The Browns really didn’t have star players of their own, but when the Yankees came to play, a few thousand wanted to see Ruth and Gehrig and later DiMaggio, and they made a special trip to see them,” said Peter Golenbock, author of The Spirit of St. Louis: A History of The St. Louis Cardinals and Browns.

What was it like for the players to perform in front of so few fans?

Golenbock said, “The short answer is that this was during the depths of the Depression, and more than anything else, the players were grateful that they had jobs. Millions of Americans were out of work and had to wait in bread lines for food. Without baseball, many of them knew they too would be standing in those lines.”

After 86 years, this ignominious record for the lowest attendance in a season still belongs to the Browns, which haven’t played a game in Missouri since 1953. The following year, the team relocated to Baltimore.

In the 1920s, St. Louis was the fourth largest city in the country, but by the 1930s it had shrunk to the sixth smallest market in baseball, larger than only Boston and Pittsburgh.

“The 1930s was at the heart of the depression, when a lot of people had no money,” said Golenbock, who added it was tragic “how poverty-stricken St. Louis was back then.  It was horrible.”

This is how one writer described the city in those times: “As the Great Depression forced St. Louis residents out of their homes and their economic situations became more and more precarious, they migrated to the river’s banks. There, they built makeshift homes of orange crates, pieces of wood and what garbage they could scavenge from the city’s docks and alleys.”

Unemployment reached as high as 30 percent.

The St. Louis metropolitan area was a railroad center and had several steel and iron plants. But the Great Depression closed many of the industrial jobs.

One of the nation’s brewing centers, the city suffered under the Depression and Prohibition from 1929 until 1933, when President Franklin Roosevelt repealed the ban on alcohol.

The Browns finished seventh in 1935, five and a half games ahead of the Philadelphia Athletics, who still outdrew St. Louis with 233,133 people, but Philadelphia had two and a half times the population of St. Louis. 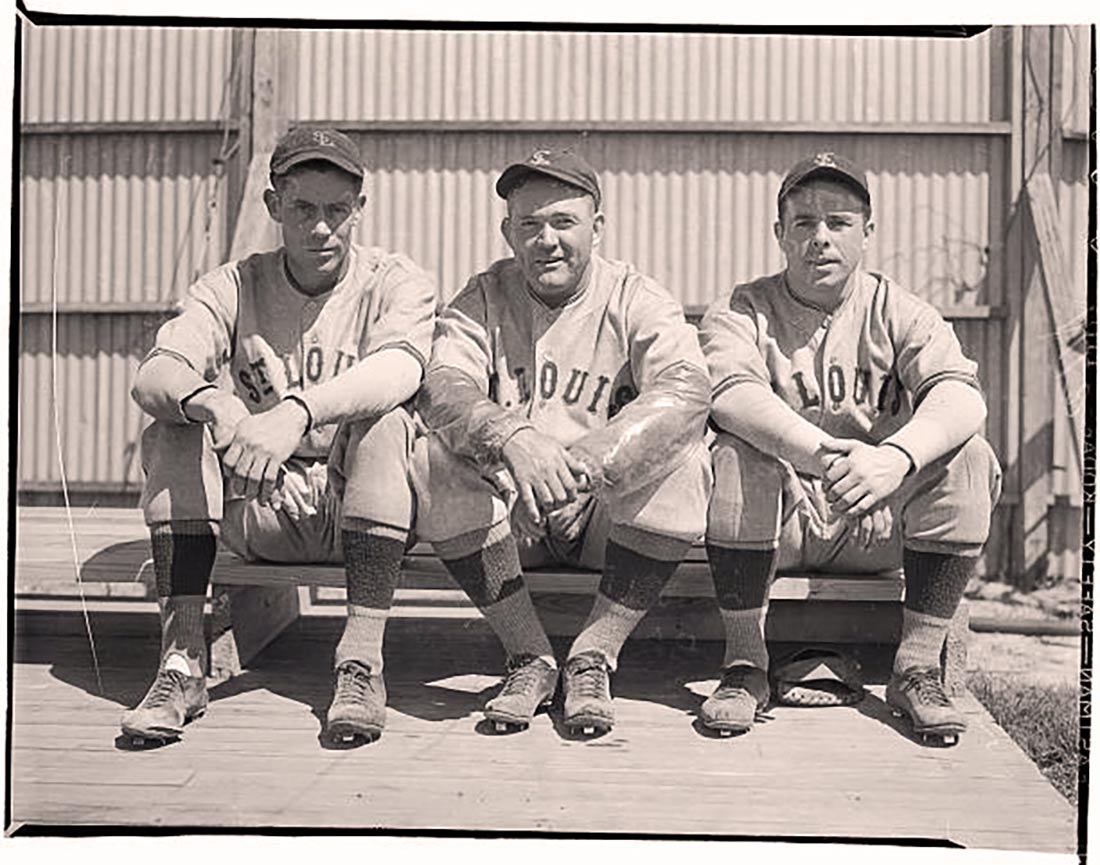 Rogers Hornsby, (C), Manager of the St. Louis Browns, is shown here with Leroy Mahaffey, (L), the right-handed pitcher, and Thomas Carey, (R), second baseman at the Brown's Training Camp at West Palm Beach, Florida. Mahaffey played with the Athletics during the 1935 season. Carey had virtually supplanted Hornsby at second base.

In 1935, the Cardinals drew 506,084 (an average of more than 6,500 per home game, good for third place in National League attendance. They were 96-58, but finished second, four games behind the Chicago Cubs.

The Cardinals were fielding the “Gas House Gang,” with players such as Pepper Martin, Frankie Frisch, Leo Durocher and Dizzy Dean, said Ed Wheatley, Jr., president of the St. Louis Browns Historical Society and Fan Club, and co-author of St. Louis Browns: The Story of a Beloved Team.

“The Gas House Gang weren’t clean shaven, got their uniforms dirty by stealing bases and sliding aggressively to take out fielders. They were a team that fans, ravaged by the Depression, could relate to,” said Wheatley. By comparison, “the Browns were vanilla,” he said.

The Browns were caught in a difficult situation after owner Philip Ball died in 1933, said Wheatley. The team was run by the attorneys who handled his estate, who didn’t know how to operate a ball club, he said. Between bad teams and the Great Depression, the Browns finished last in major league attendance for 10 straight seasons, from 1929-39.

In addition, Wheatley said the Cardinals radio broadcasting signal was strong, reaching far into the south and western United States, which helped with the Gas House Gang’s popularity.

While the Browns have not existed since 1953, they have a vibrant historical society and fan club with hundreds of members. It began when a player from another team was inducted into the Baseball Hall of Fame. A Brooklyn native who transplanted to St. Louis, Bill Borst’s favorite ballplayer was Brooklyn Dodgers shortstop Pee Wee Reese. Borst was in attendance for Reese’s induction into the Hall, but noticed that no one affiliated with the Browns was there to see Browns’ catcher Rick Ferrell being inducted. Borst then started the society.

The organization produces three magazines a year, holds an annual banquet, and sponsors a St. Louis Browns Night at the minor league Gateway Grizzlies, in which a Browns player is honored. The Grizzlies wear St. Louis Browns uniforms (the opposing team wears uniforms of the Washington Senators.) Wheatley says the Frontier League Grizzlies, based in St. Louis suburb of Sauget, IL, sell out the event, which features a bobblehead doll of the honored Browns player. One year Roy Sievers, the 1949 American League Rookie of the Year, was honored. His daughter was in attendance, saw the bobblehead, and according to Wheatley, started to cry and said, “That’s my father.” 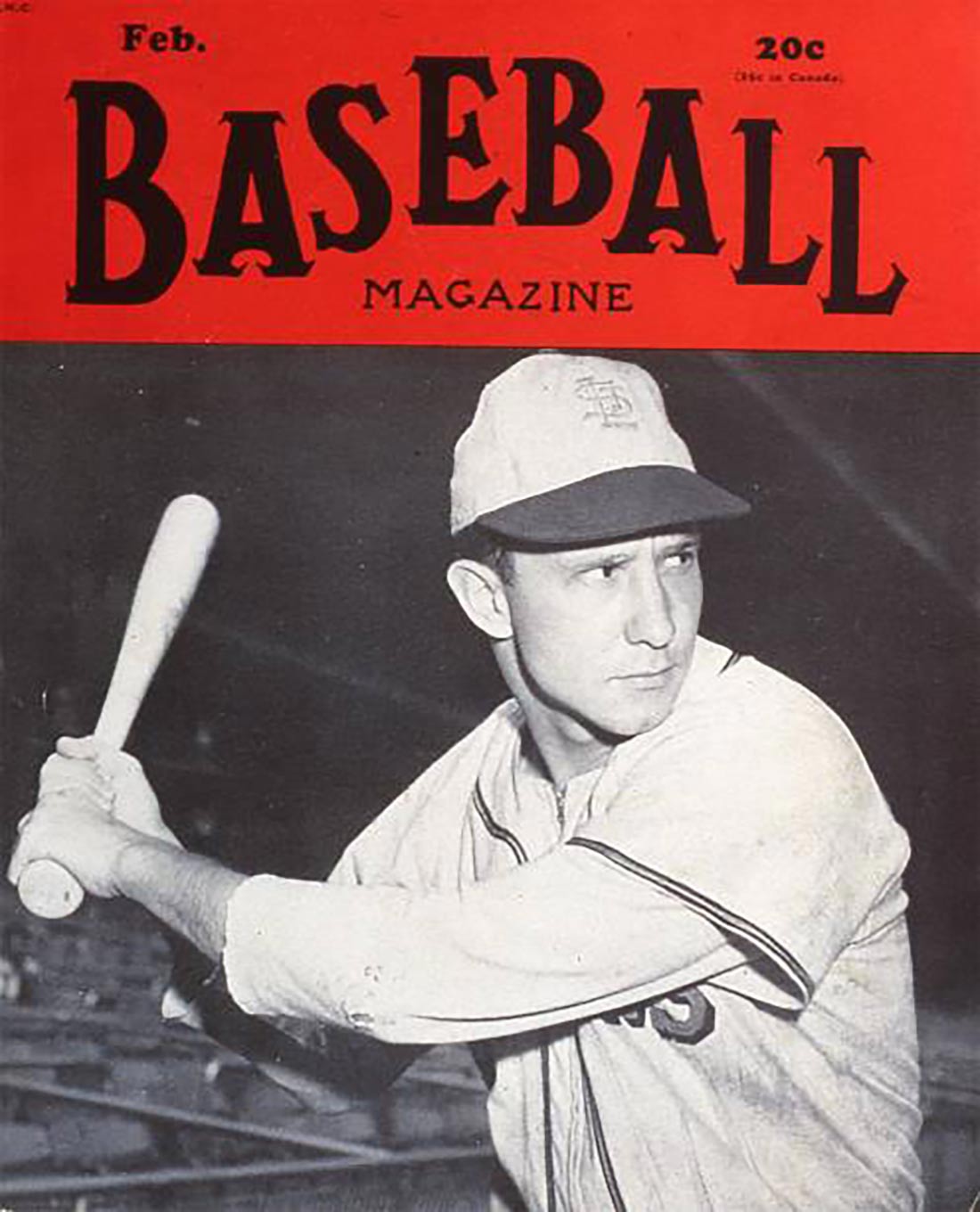 Wheatley was involved in two documentaries made about the Browns:

The Team Baseball Forgot premiered in March 2018.  “It set an all-time viewership record here in St. Louis on the (PBS) station, as well as a pledge funding record, so they asked what more I could do and that became the second film (A Baseball Legacy: Fans Remember the St. Louis Browns), which premiered in August 2019,” he said. “Both were nominated for EMMYs and we won with the second film.  Both were selected for the National Baseball Hall of Fame’s Annual Film Festival for 2018 and 2019,” said Wheatley.

The number one Browns fan of all time was Gerta Slama, who was recognized by the society. She died last year at the age of 103.

In an interview with the St. Louis Post-Dispatch, Slama recalled how she would pay a nickel to get into Sportsman’s Park and then head to a picnic table.

“Players would come out there in between innings and I’d be there to get autographs. And they’d sit with me and talk; they were all so nice,” she told the paper. While the players were friendly, there was one hulking figure who she never approached for a signature. One day this player asked her why she never asked for his autograph.

“You scare me,” she replied. It was Babe Ruth, who did give her an autograph.

Slama laughed when the newspaper asked how she remained devoted to a team that usually finished last in the American League.

“I was 10,” she said. “I honestly never realized they were so bad.” The Browns best year was 1944, when they won their only pennant and played the St. Louis Cardinals in the “Streetcar Series,” but were also “seen” by millions of movie-goers. 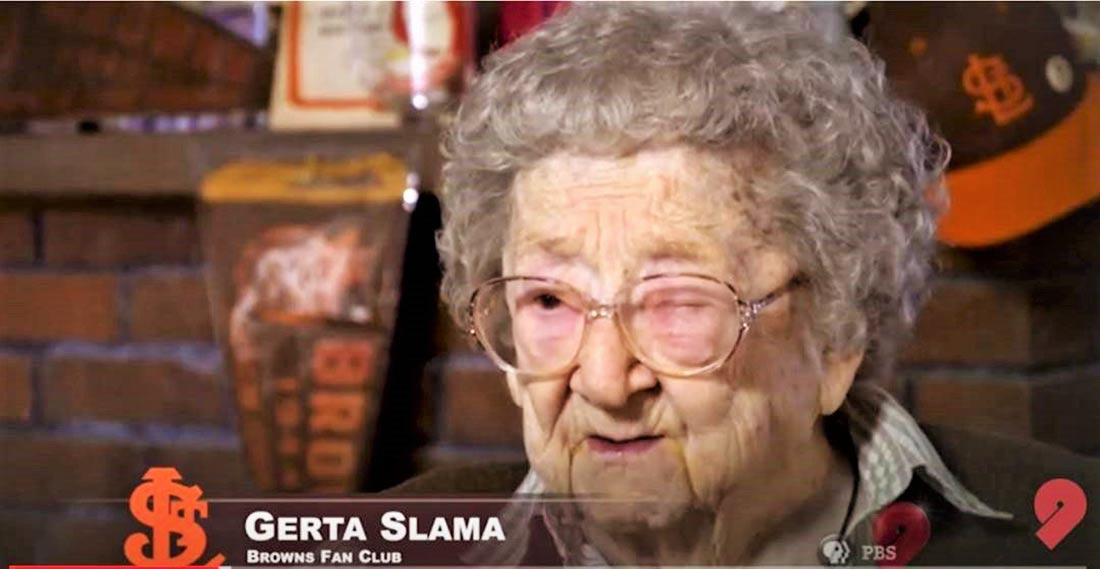 In the 1944 film, Going My Way, which won the Oscar for Best Picture and Best Actor for Bing Crosby as Father O’Malley, Crosby’s character’s favorite baseball team is the Browns and he frequently wears St. Louis Browns hats, jackets and sweatshirts in the picture. In the movie, Fr. O’Malley takes a group of boys to see a baseball game.

“There was a lot of gushing about the Browns in 1944 when the film came out and went on to win the Academy Award, but alas the Browns did not get the big award,” said Wheatley, meaning the World Series championship (the Cards won in six games). “The Browns and Crosby would pal around and he would even work out with the team during the year, and was at the World Series when the world was singing Meet me in St. Louie Louie, Meet me at the Fair from the Judy Garland film that year Meet me in St. Louis.  Except in reality, they were (not) meeting at the World’s Fair but instead at Sportsman’s Park for the World Series between both St. Louis teams.”

Slama not only attended the series but met with Crosby at one of the games.

Only nine years later, however, the team left St. Louis. (There are four Browns players still alive: George Elder, MLB’s oldest living former major leaguer, Frank Saucier, Ed Mickelson, and Billy Hunter). The team is probably best remembered for playing one-armed outfielder Pete Gray in 1945, and being owned for a few years by Bill Veeck, who hired 3’7” Eddie Gaedel to play for the Browns in the second game of a doubleheader on August 19, 1951. He batted leadoff and walked on four pitchers in his only big-league at-bat.

Slama told the Post-Dispatch she even remained faithful to the team during their first few seasons in Baltimore. But she gave up her allegiance “because the Orioles refused to mention the Browns, or even recognize that they ever existed.”

“And that,” Slama declared, “was wrong.” 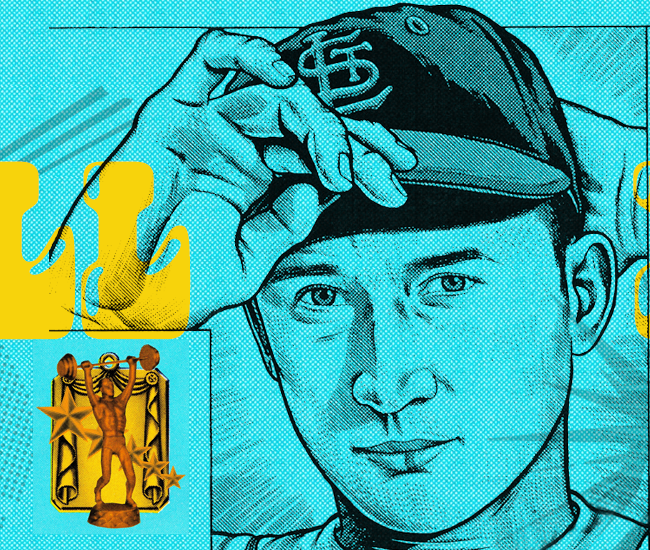