In Defense of the Yankees 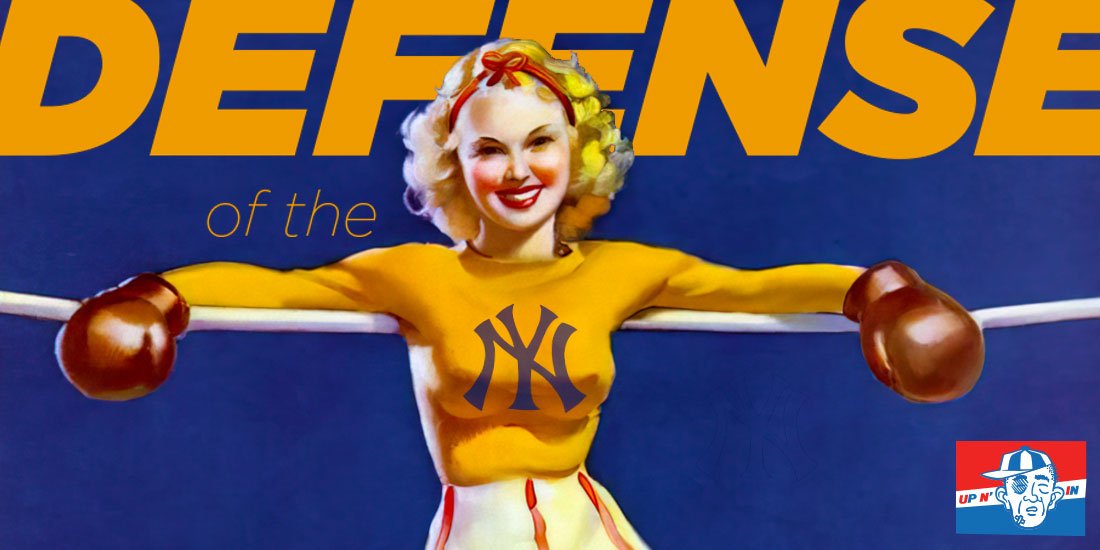 If you were asked to name the most sabermetrics-driven team in Major League Baseball, you’d probably say it’s either the Oakland Athletics or the Tampa Bay Rays.

The former team had a book and movie dedicated to their use of the art and science of sabermetrics; the latter team has contended annually for about the past decade with one of the smallest payrolls and among the best pitching in the game. And yet, as we all know, by now every MLB team is engaging in the use of statistics and sabermetrics as drivers of their strategy — and not just on-field strategy, but roster-building strategy, farm system strategy, and even coach and manager hiring strategy.

The extent of the use of advanced statistics by each team, whether in the American League or National League, is just a question of degree.

Most would consider the NY Yankees to be in the top quartile in the use of advanced analytics to drive their strategy. Manager Aaron Boone has felt the need to defend his management responsibilities against criticisms that he’s basically just a puppet of the Yankee front office and analytics team, being handed a lineup every day and having no say in which pitchers pitch, in what exact sequence, in each game.

Across town, in 2021, NY Mets manager Luis Rojas felt the need to make similar assertions about his control over what happened in each game, additional evidence that the sabermetrics atmosphere is permeating MLB; also making it somewhat unsurprising that Luis Rojas has now become the Yankees’ third base and outfield coach. 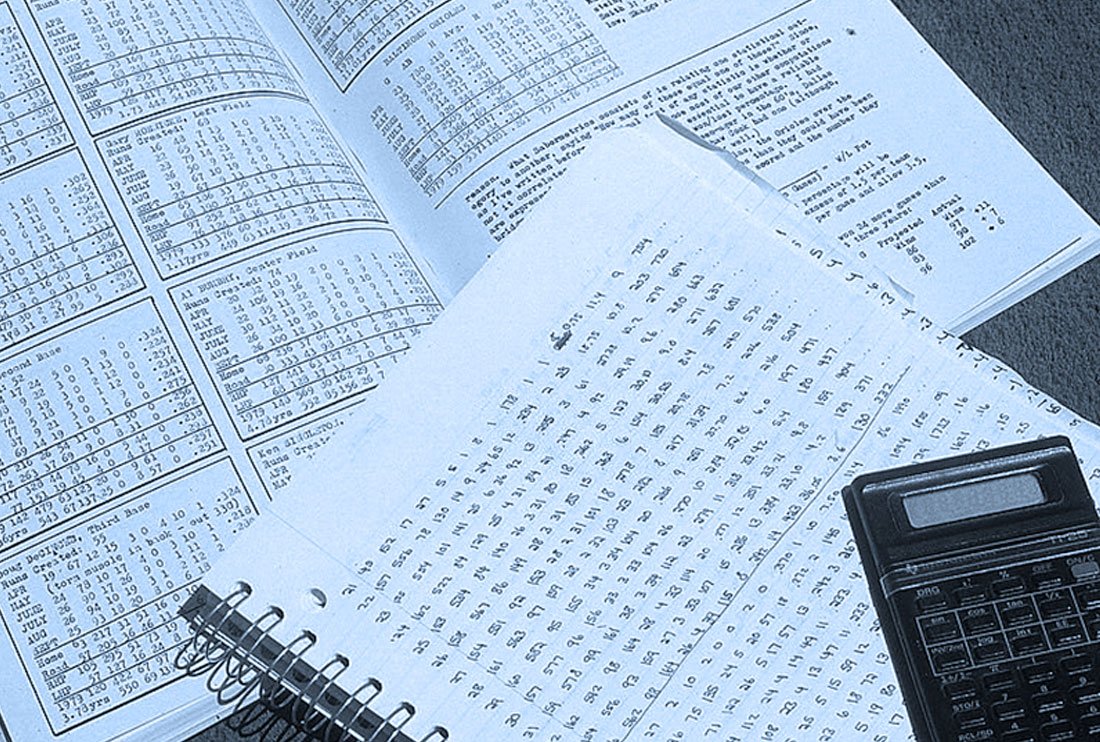 Closeup of notes, equations, and calculator by statistician Bill James at his home. James is an author and the founder of Sabermetrics. Lawrence, KS 5/4/1981 CREDIT: Lane Stewart (Photo by Lane Stewart /Sports Illustrated via Getty Images)

But it’s not my intent here to make a statement about whether the Yankees or Mets are overutilizing advanced statistics to drive their strategy or decision-making. Each MLB team is under control of different ownership and different general management. And, as demonstrated by Derek Jeter’s exit from the Marlins’ organization, when majority ownership and operations management clash, the approach to strategy and decision-making can change in a heartbeat. Rather, my questions today are: why did the Yankees make the player acquisition and roster moves they did after the lockout ended; might the team composition be good enough this year; and is the projected 2022 lineup “scary” enough for this team to contend? 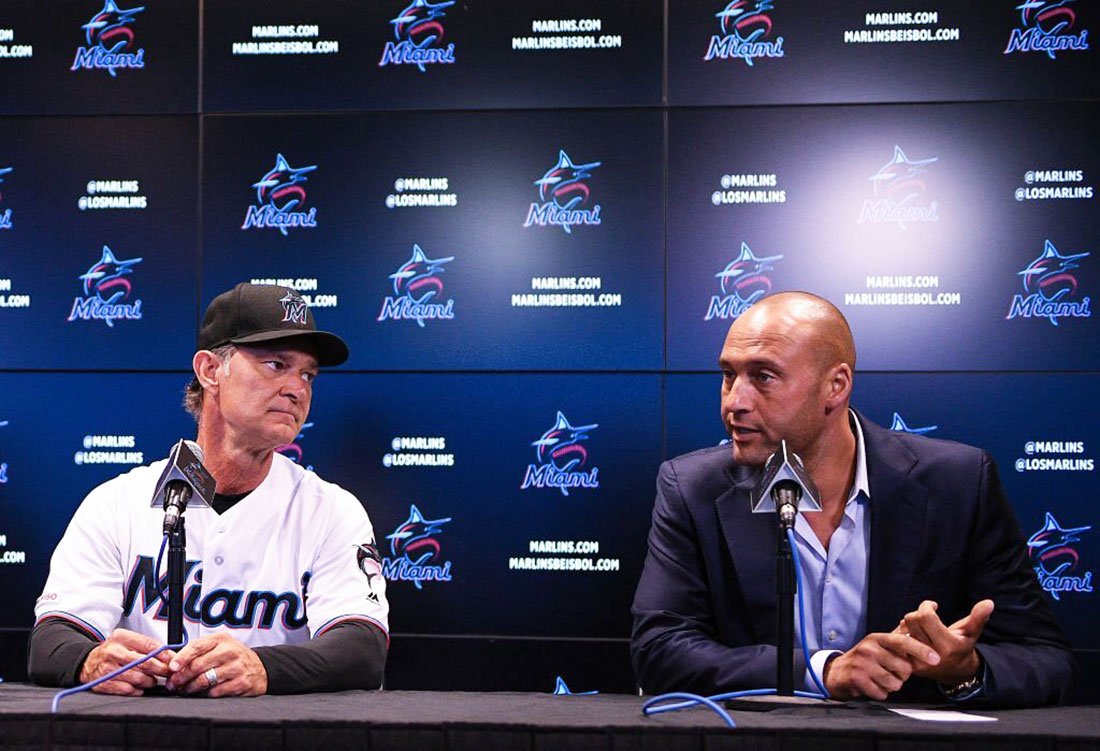 Manager Don Mattingly and Derek Jeter CEO of the Miami Marlins speak during a press conference at Marlins Park on September 20, 2019 in Miami, Florida. (Photo by Mark Brown/Getty Images)

Rather, this kind of organization feels that its spending budget needs to be spread around to fix a multitude of errors — both literally and figuratively.

For these questions, as a matter of reflex one has to look at the Yankees’ defensive metrics for the past several years. Why is that? Well, without even looking, we know two things: most of the player acquisitions the Yankees made this month were defensive (and speed) acquisitions, and not signings of the MLB superstars who were available; and, just as importantly, the Yankee defense over the past several years has been in the bottom range of league average. This gives rise to several further questions: were the recent defensive weaknesses concentrated in one area of the field?; can we hypothesize about how much defensive lapses interfered with win percentage?: and, can the statistics that answer these questions explain the post-lockout moves the Yankees decided to make — as opposed to the moves (including signing the superstars) they decided to pass up?

For starters, in 2021 the Yankees ranked 13th out of 15 teams in the American League in errors. Most of the errors came from the middle infield — particularly, from the shortstop position — but a decent number came from the second and third base positions, as well. In total, second base, third base, and shortstop accounted for roughly half the 95 errors the Yankees committed last season. The remainder of the errors were pretty well spread out among the first base, pitcher, catcher, and outfield positions. Although there’s been a lot of criticism of Gary Sanchez’s catching defense, he actually committed only six errors. The rest of his defensive lapses were not in the error category — but more in the pitch framing, blocking, and other catcher-specific defensive categories. Gleyber Torres, Rougned Odor, and Gio Urshela accounted for the majority of Yankee errors, by player. 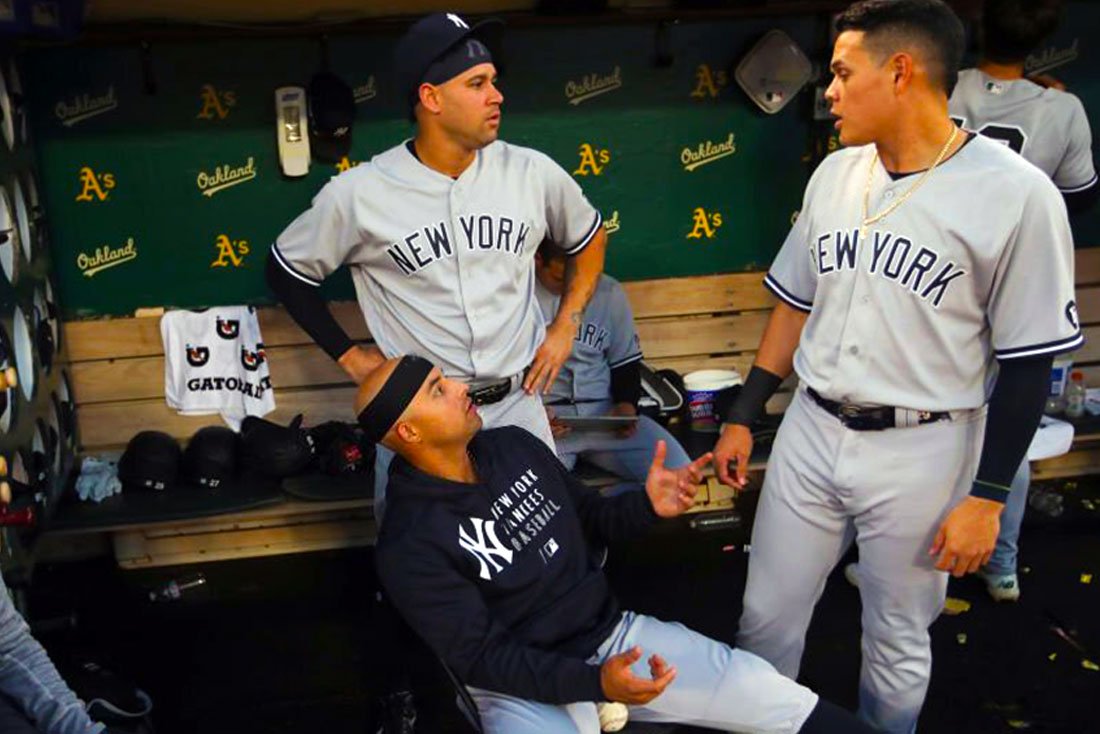 Rougned Odor #12, Gary Sánchez #24 and Gio Urshela #29 of the New York Yankees in the dugout during the game against the Oakland Athletics at RingCentral Coliseum on August 27, 2021 in Oakland, California. The Yankees defeated the Athletics 8-2. (Photo by Michael Zagaris/Oakland Athletics/Getty Images)

So in terms of total fielding percentage, it’s not surprising to learn the Yankees ranked 12th overall out of 15 teams in the American League in 2021. Moving to overall WAR (Wins Above Replacement), I doubt anyone reading this would find it shocking that Aaron Judge had the highest 2021 WAR on the Yankees, of all pitchers and players, at 6.0. Gerrit Cole followed closely behind at 5.7 WAR; again, not much of a surprise. Jordan Montgomery, Jonathan Loaisiga, and Giancarlo Stanton were in the mid-range on the Yankees in 2021 WAR, at 3.4, 3.3, and 3.1 respectively. And then the story becomes rather dreadful. No other pitcher or player’s WAR was above 2.0 except Nestor Cortes Jr. at a 2.8 WAR and Jameson Taillon at a 2.2 WAR, respectively. 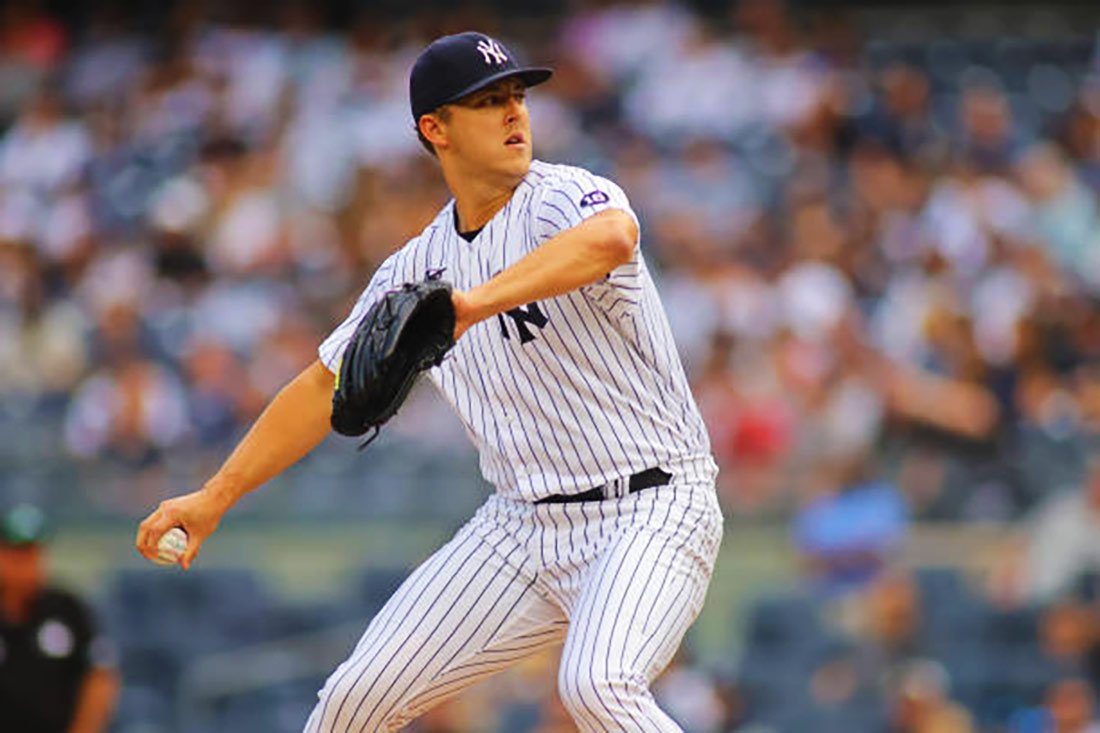 But why does overall WAR matter? WAR includes both offensive and defensive value in terms of being replaced by another player at the specific position. A WAR of 0.0 is roughly neutral; the player can be replaced pretty easily by any other competent major leaguer who plays that position. In order to be truly valuable to a team, you want your WAR to be above 0.0 — and as far above 0.0 as possible. Unfortunately for the 2021 Yankees, many of their pitchers and players had WAR ratings of below 1.0; and in some cases, below 0.0. In short — and to quote Joe Girardi — it’s not what you want. (You might be interested to know that almost all the players with negative WAR from last year are no longer starting for the Yankees in 2022.)

It’s not by coincidence that the team members with the highest WAR numbers on the 2021 Yankees were all pitchers and outfielders, in addition to the players with the lowest defensive ratings on the 2021 Yankees all being infielders — and then the Yankee front office decided to go after defense and athleticism in the post-lockout period (as opposed to pursuing a couple of “big name” signings to make sure fans knew they were trying to be competitive). Recall, the Yankees are a pretty heavily sabermetrics-oriented organization. This kind of organization feels that spending all its intended signing budget in one year to sign one Freddie Freeman or Carlos Correa, as impactful players as they may be, isn’t going to clean up last year’s mess. Rather, this kind of organization feels that its spending budget needs to be spread around to fix a multitude of errors — both literally and figuratively. 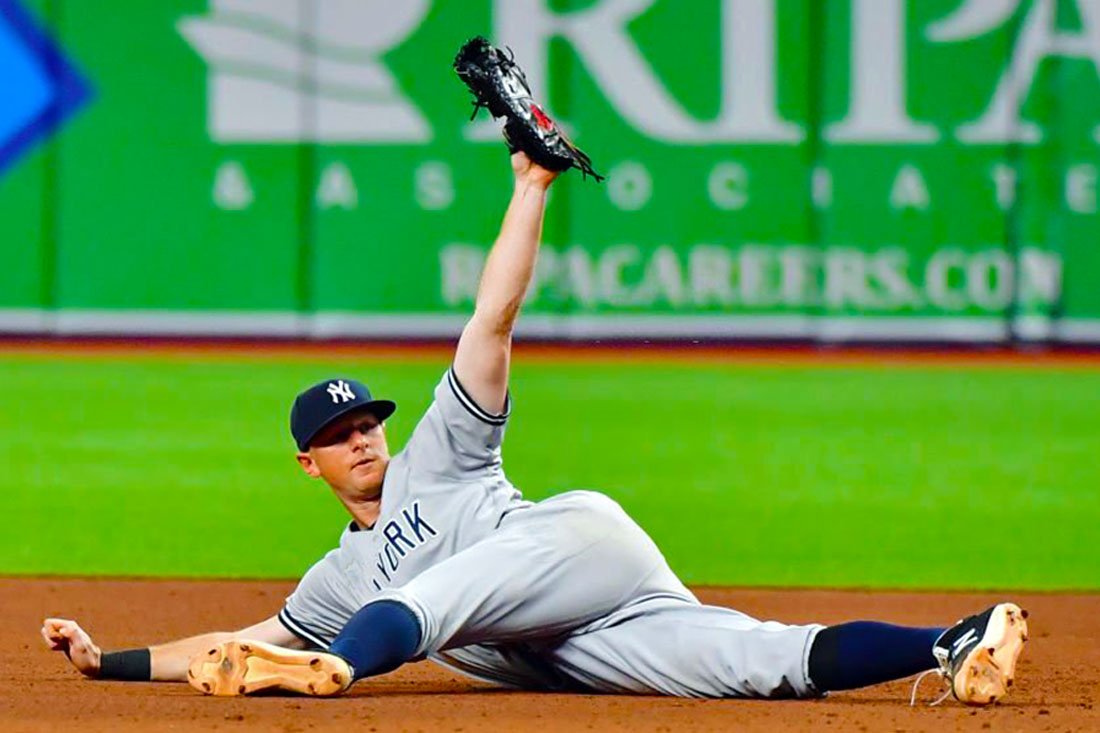 DJ LeMahieu #26 of the New York Yankees catches a pop up off the bat of Francisco Mejia of the Tampa Bay Rays in the 10th inning to defeat the Rays 3-1 at Tropicana Field on July 28, 2021 in St Petersburg, Florida. (Photo by Julio Aguilar/Getty Images)

So, of our earlier questions, the one that still remains is: will the Yankee starting lineup be “scary” enough to help them contend this season? If all goes as planned, the Yankee starting lineup once the season begins will include some mix of Aaron Judge, Giancarlo Stanton, Josh Donaldson, DJ LeMahieu, Joey Gallo, Anthony Rizzo, and Aaron Hicks — along with Gleyber Torres, Isiah Kiner-Falefa, and Kyle Higashioka.

Now let’s do a quick thought experiment: imagine you didn’t know that Carlos Correa, Freddie Freeman, Corey Seager, and the other renowned free agents or traded players were available this past offseason. Would you look at this lineup and immediately react “oh no, it’s not a serious hitting lineup?” Sure, the Red Sox and Blue Jays, both in the Yankees’ division, have potent and very “scary” lineups. No one’s disputing that. But in a vacuum, so do the Yankees. And the Yankee organization seems to have finally figured out that it’s very challenging to simply hit your way into the playoffs.

Could some more pitching help? Undoubtedly. Would a Freddie Freeman or two help on offense? No question. But if you had to choose between being 12th in a league of 15 teams in defense and in the top quarter in offense, versus being, say, 3rd in that league in defense and in the middle of the pack in offense, could you say for a certainty that the former would get you further in the playoffs than the latter?

previous article
Oh, Josee, Eh!
next article
All The Angles