It’s not surprising that Brian Callaghan has channeled his passion for baseball into a creative endeavor.

The Richmond, Virginia resident has loved the game for decades after being introduced to it in the 1970s. So, when Callaghan, 51, began drawing, painting and creating his own brand of baseball art, it made sense for him to harken back to his baseball roots. He grew up in Randolph, New Jersey, a suburb of New York City, and his first sporting love – the Yankees – remains his primary sporting love. Callaghan was introduced to Thurman Munson, Reggie Jackson, Billy Martin and Co. just as the Yankees regained control of the baseball universe and it is that time period that has influenced many of his creations.

When he sets about drawing, though, there is a distinct 70s feel to his work, not only in terms of the subject matter but also because of the baseball cards he collected as a child. Callaghan replicates many of the great Topps baseball cards from that era, putting his own unique spin on how the players are represented.

The result is a stunning, colorful display that sets Callaghan apart from many of his contemporaries that have taken a more traditional route in their depictions of baseball history. Callaghan’s work can be found on his Instagram page, @hokiecal­_art.

“My style is just trial and error,” Callaghan said. “When you are looking at other artists, current and folks from the past, what’s the look and feel that resonates with you. I wanted to do something that captures the essence or the spirit of the person I am drawing. But I like the naïve art style, the folk-art style that is intentionally childlike in some ways. It’s drawn intentionally with the proportions off with angles and straight lines being mixed into the images that don’t exist in the natural world.

“When you do that type of stuff, when it’s quirky and offbeat yet distinctly still the subject, that’s what I kind of go for when you look at it. I get stuck when I find myself trying to be loyal to a photographic representation of that stuff. Art is interpretation and you want to have a take on the subject matter. If you look at the Rod Carew I did, one leg is skinny and one leg is thick and all things are slightly out of proportion. But, if you show it to a baseball fan, they say Rod Carew.”

Callaghan began creating these depictions several years ago, but his artistic roots can be traced back to his time in North Jersey before moving to Virginia just before he began high school. Callaghan had done some drawing and painting as a youngster, a talent that was encouraged and nurtured by his mother, who sent him to a neighborhood artist for weekly art lessons.

“As I got older I started playing baseball and basketball and football, doing the sports thing,” said Callaghan, who attended Virginia Tech University. “I kept up the art a little bit, but it faded away as I went to college and began working. I started Business Apex Systems, an IT staffing business, in 1995 with guys I had gone to college with. We worked together when we got out of college and we were fortunate that the business kept growing. We ended up selling it in 2012 but I joined the board of the company that bought us.

“I don’t mind doing it for less money. I’m not trying to create a big side hustle or a big income stream. It’s really just passion and the satisfaction of making it.”

“About three or four years ago they [the aforementioned company] had given us each an I-Pad Pro with an Apple pencil for being on the board. Jorge Columbo, an artist in New York City, had been doing covers for New Yorker on an I-Phone and I had read about it. I thought that was cool. Drawing and painting require time, but they gave me the I-Pad and I was on a plane. I downloaded the Procreate app [which Columbo had used]. I was still doing it by hand but the technology replicates drawing in real life – but if I made a mistake, I could undo something. It sped up the process immeasurably and was kind of fun.”

“When I first got back into doing this, I just told myself to be prolific,” Callaghan said. “Just make a lot and learn. You’re going to make mistakes but just keep going and get better, especially if you’re just beginning and trying to put stuff out there. I’ve gotten into more traditional painting as well, but the I-Pad still remains a great tool, especially when you don’t have a ton of time – though I’ve had more since I’m not going into an office.

“I got out some old baseball cards and originally did Yankees [from the 1978 Topps set]. After doing a bunch of cards I posted them on Facebook for all my friends. Everyone thought it was awesome and people were saying I didn’t know you drew but after a while people were saying ‘Dude, we get it’. It just wasn’t the right place to keep posting there.” 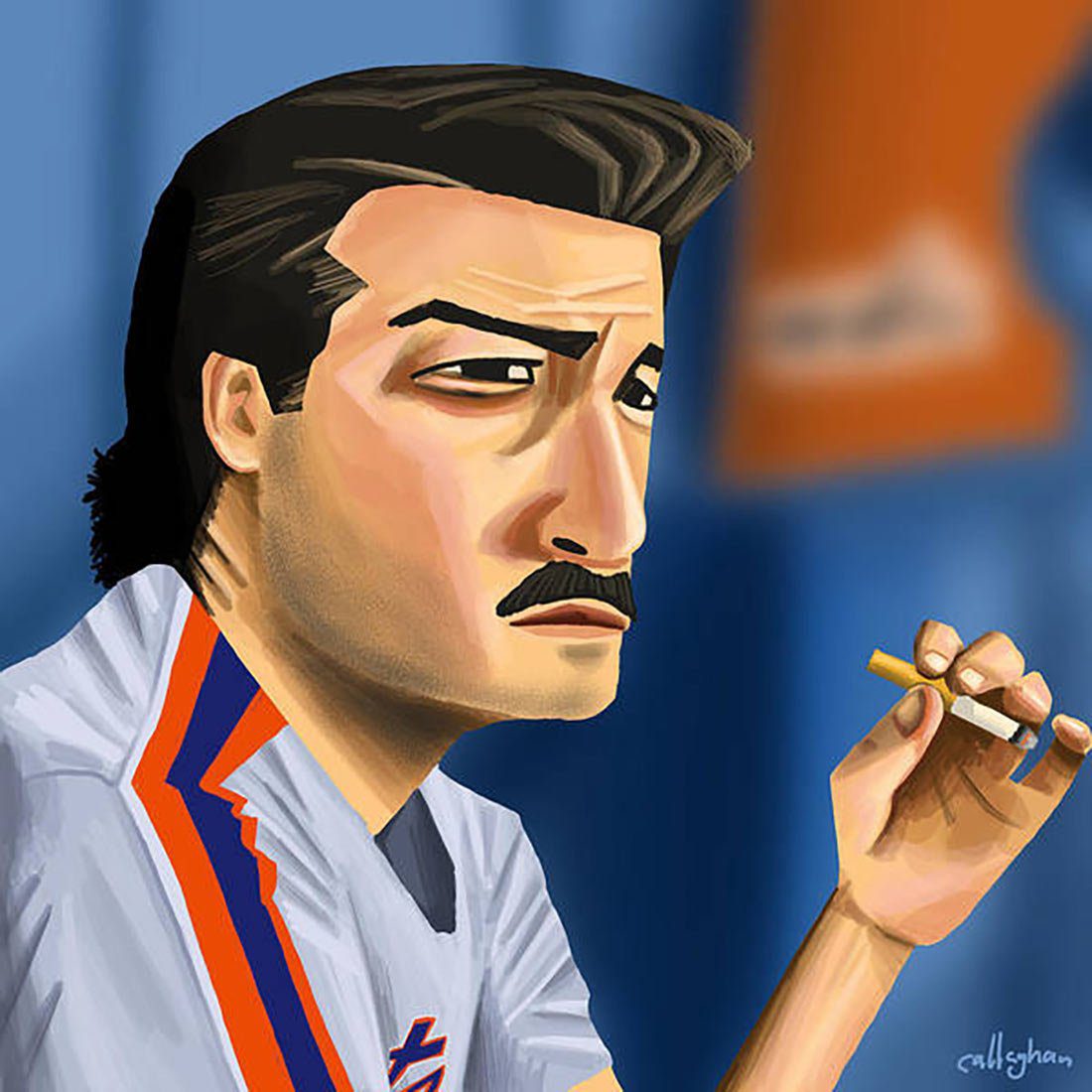 So, Callaghan headed over to Instagram, where he has 5,500 followers and more than 300 posts. While he remains a Yankee fan, plus a fan of the Giants and Royals, he doesn’t limit himself to who he will draw. His work covers all eras and teams, showcasing his love for the game.

He said he has done a few pieces based on each of the two teams in which he holds a stake and did have an idea that involves doing a series of paintings about the Flying Squirrels that could be hung in and around the ballpark. That idea, though, may not reach fruition.

“It felt a little self-serving and maybe kind of lame,” Callaghan said. “Who knows? Maybe I will.”

Callaghan has, however, drawn quite a few Hall-of-Famers, including Johnny Bench, Mickey Mantle, Brooks Robinson, Frank Robinson and Carew. He would like to reach out to the Hall-of-Fame to see if there is any interest in including some of his pieces in the museum’s various collections.

“They have their curated art section so maybe I will reach out to someone there and ask, ‘Do you look at other artists?’, that kind of thing,” Callaghan said. “That would be the most gratifying, a lot more gratifying than someone saying here is $500 for your painting. To have someone hang it in the Hall or have a Major League team wanting to hang it in its park or office or whatever would feel really good. I’ll give it a try and see what they say.”

That’s not to say that Callaghan’s work isn’t for sale. He works with Fine Art America, a company/website from which you can purchase the by hundreds of independent artists.

“They give you a free dedicated page and if someone likes a print they can buy it,” he said. “I didn’t want to be the guy printing and licking envelopes. Folks can purchase independent prints so if something costs 30 bucks, I get $5. I like the satisfaction of making something that people appreciate and wanted.

“I’ve sold some actual paintings but I’ve also stockpiled. I’m still at a point where I want to keep some of the things I am making because I haven’t decided what to do with all of them. I don’t mind doing it for less money. I’m not trying to create a big side hustle or a big income stream. It’s really just passion and the satisfaction of making it.” 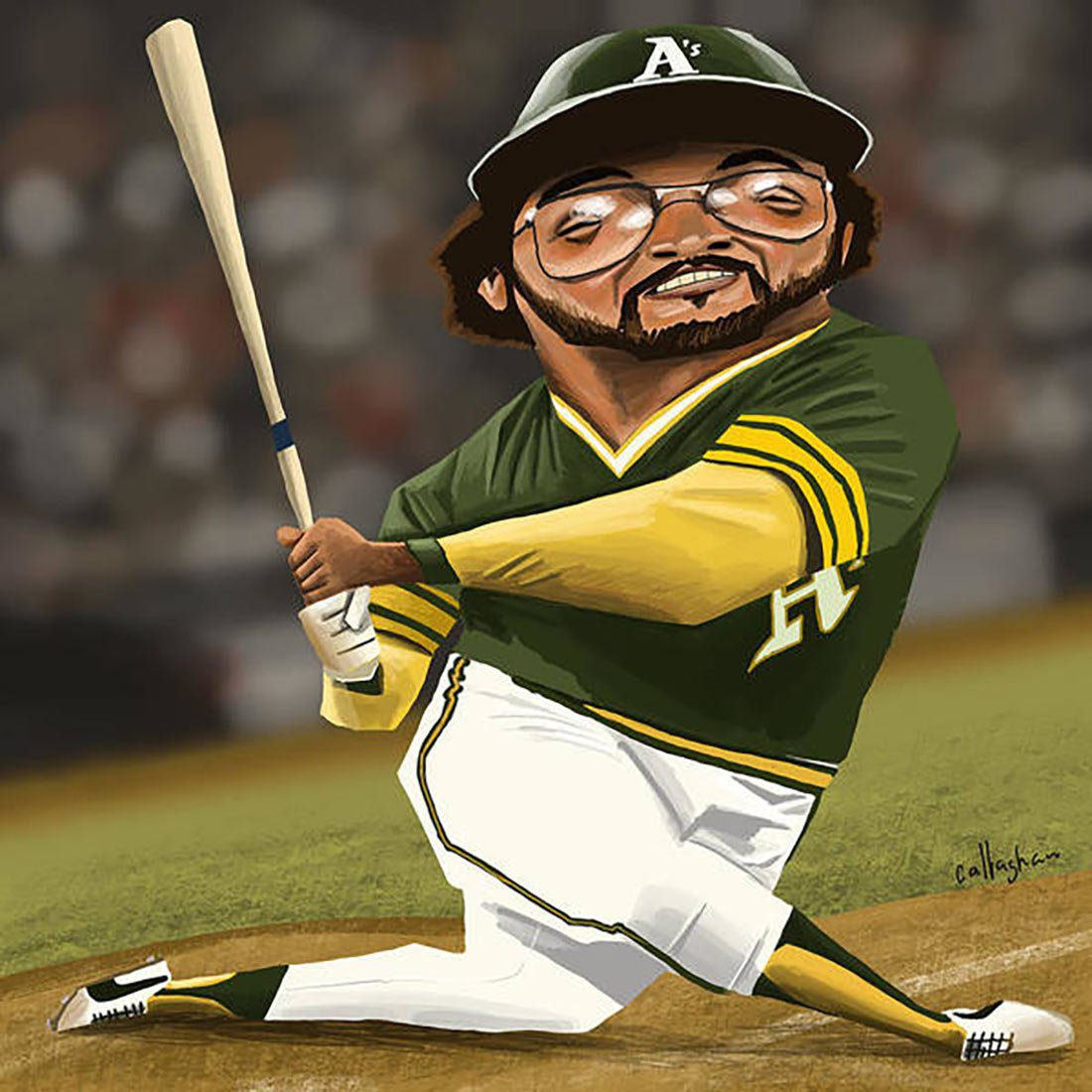 Callaghan was asked to contribute to a 2020 project as part of a collective effort to support the Negro Leagues Baseball Museum in Kansas City. He created a booklet depicting the former Negro Leaguers who were elected to the Baseball Hall of Fame. The book includes the likes of Willie Mays, Hank Aaron, Cool Papa Bell, Josh Gibson, Satchel Paige, Oscar Charleston, Boojum Wilson and Larry Doby. His portrait of Wilson won the Negro League art contest conducted by the Society of American Baseball Research [SABR] Jerry Malloy Conference.

“It was really well received,” Callaghan said of the project. “When they proposed it, I had five or six weeks to finish it. I was trying to do one a day, maybe two a day and that’s a lot because don’t have time. But I made a concerted effort and I learned a lot. I consider myself a pretty knowledgeable fan but there was a lot I didn’t know that I was intrigued to learn about.”

Another avenue about which Callaghan has learned a great deal is through team ownership. He has been involved in team ownership for more than a decade in Virginia and Nebraska. He originally became involved in that venture after the Richmond Braves, Atlanta’s then affiliate in the Triple-A International League, left the city and moved to Gwinnett [Georgia] in 2009. The Braves had played in Richmond since 1966, first at Parker Field and then at The Diamond, which remains the home of the Flying Squirrels.

“We didn’t have a team and the ballpark was sitting empty,” Callaghan said. “I played ball growing up and loved the sport. A bunch of local businesses tried to buy a team from Connecticut and bring it down here. I looked at it and thought it would be a good opportunity and some fun, so I hopped in. They didn’t end up raising enough money, though. But I reached out to the Connecticut ownership and told them I would love to be part of it and that was it.” 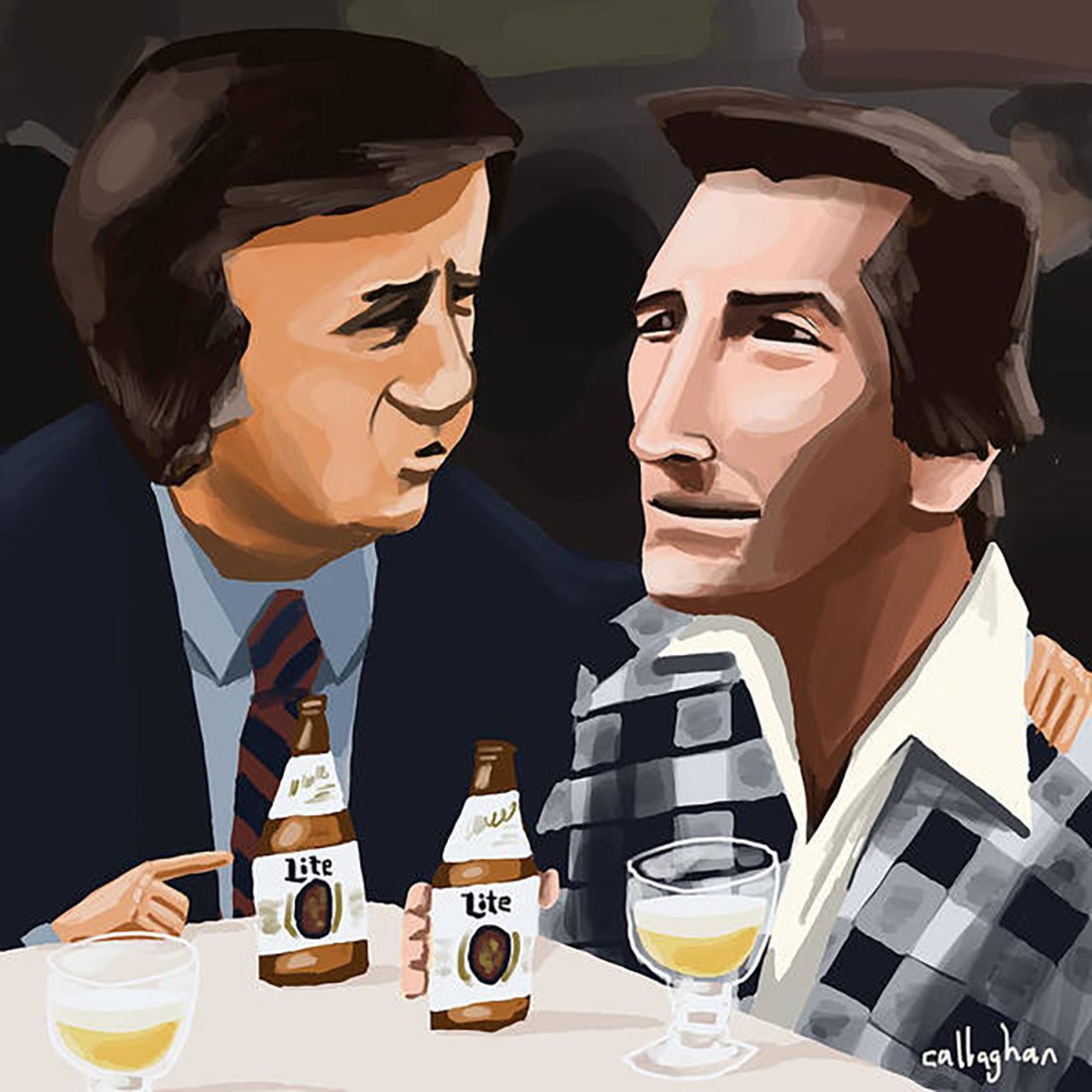 Billy and George - By Brian Callaghan

The Diamond, which was built in 1985, is outdated, though, and is an eyesore, a concrete monstrosity that needs to be replaced. Callaghan knows it and he and the other owners are working to get the Flying Squirrels a new home.

“We’ve been trying to get a new park but you should never engage in a land war in Asia and never buy a minor league team that needs a new ballpark,” Callaghan said. “MLB has been helpful in a sense because they are a heavyweight and Virginia Commonwealth University needs a new facility, too. They play there [at The Diamond] as well. We are in a great market and have a great fan base but it [The Diamond] is a neo-Soviet concrete bunker.”

The Omaha Storm Chasers, of whom Callaghan became a part owner in 2012, has Werner Park, a state-of-the-art facility that the team moved into after calling cavernous and archaic Rosenblatt Stadium home for years.

Callaghan used to get to about half of Richmond’s home games but because of all the running around he does at home his time is limited. His appearances at Omaha games are much rarer, perhaps once a year at most though he wishes there were more.

In the meantime, when he does get that rare free moment, he has his art. He also has his love of baseball and he has the ability to combine the two.

“It’s just a side gig for me because I don’t have time for it to be a whole lot more,” Callaghan said. “I really enjoy it but for me it’s an engrossing hobby.”