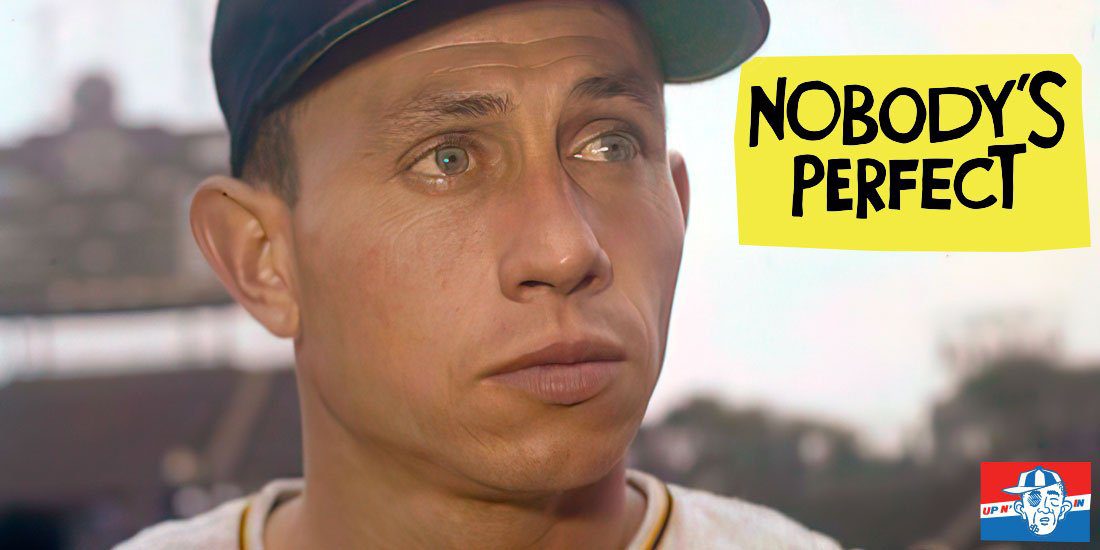 The Extra Perfect Game That Wasn’t

You may not have heard of Harvey Haddix, even though he goes down in MLB lore as pitching one of the most notable games in the Pittsburgh Pirates’ history. His career with the Pirates wasn’t long; he pitched for five teams over the course of his career and spent only four seasons with the Buccos, from 1959-1963.

Haddix began his career with the St. Louis Cardinals, where he was nicknamed “The Kitten,” due to his resemblance to Harry “The Cat” Brecheen, a left-hander on the Cardinals during Haddix’s rookie campaign. He had his best season there in 1953 in which he went 20-9 and had 163 strikeouts (yes, that was actually a lot of punch-outs in those days), a 3.06 ERA, 19 complete games, and six shutouts. After pitching several seasons for the Cardinals, Philadelphia Phillies, and Cincinnati Redlegs, Haddix found himself with the Pirates.

Haddix was on the Pirates’ 1960 team that beat the Yankees in the World Series, and was the final winning pitcher – as he had pitched in relief in Game 7 of that series – in the top of the famed ninth inning in which Bill Mazeroski smacked the final, winning home run. 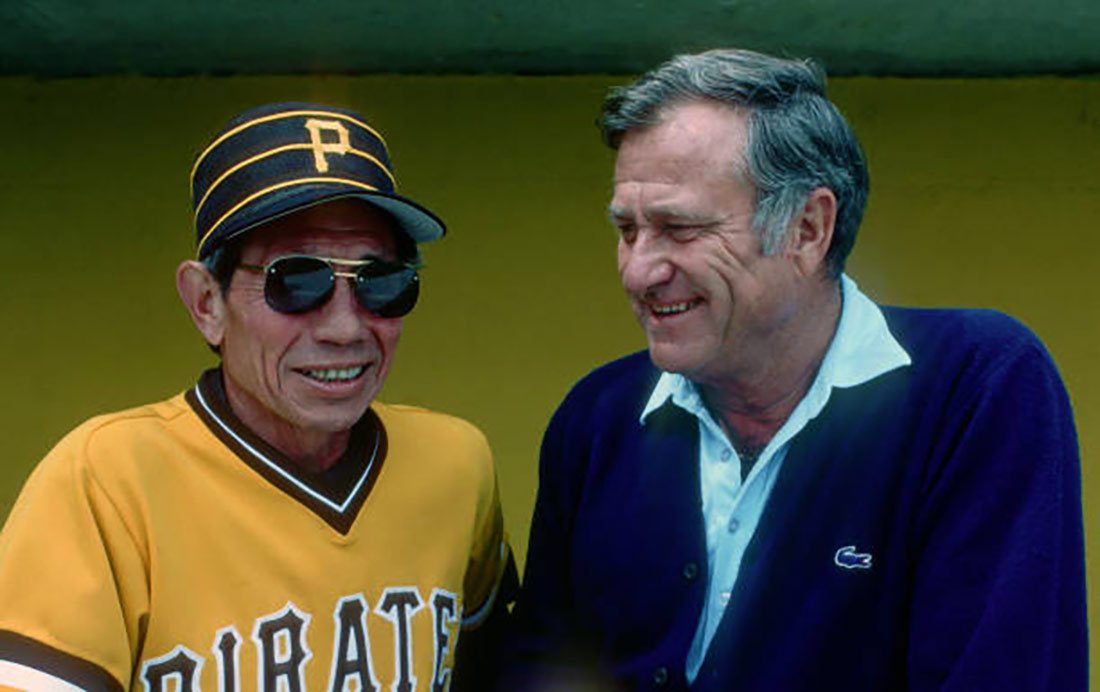 (Original Caption) Former pitcher and current pitching coach Harvey Haddix (L) of the Pittsburgh Pirates and Lew Burdette, former pitcher for the Milwaukee Braves, pose for a photo before a Major League Baseball spring training exhibition game at McKechnie Field in March 1984 in Bradenton, Florida. Haddix pitched 12 perfect innings for the Pirates before losing to the Milwaukee Braves 1-0 as Burdette pitched a shutout for the Braves on May 26, 1959. (Photo by George Gojkovich/Getty Images)

But the main legend concerning Haddix isn’t about his success in that final Game 7. It’s about the near perfect game he pitched for the Pirates on May 26, 1959. Haddix took a perfect game against the Milwaukee Braves, in Milwaukee, into the 13th (yes, you read that correctly) inning, only to suffer the loss in the bottom of the 13th.

“Harvey Haddix stepped onto the rain-softened mound and exhaled. It was May 26, 1959, nearing 10 o’clock on a muggy night in half-empty Milwaukee County Municipal Stadium. Dark clouds loomed overhead in the windswept sky, lightning flickered in the distance. There were two outs in the bottom of the ninth inning, and the Pittsburgh Pirates lefthander tugged at the bill of his black cap, glared at his catcher from underneath and nodded.

Not one player on the field had said anything to him that even hinted at what he was on the verge of accomplishing. Later, when Haddix stepped up to bat, Milwaukee Braves catcher Del Crandall would break the silence and state the obvious: ‘Hey, you’re pitching a pretty good game.’” (“The Greatest Game Ever Pitched,” Sports Illustrated Vault, June 1, 2009, by Robert Chen) 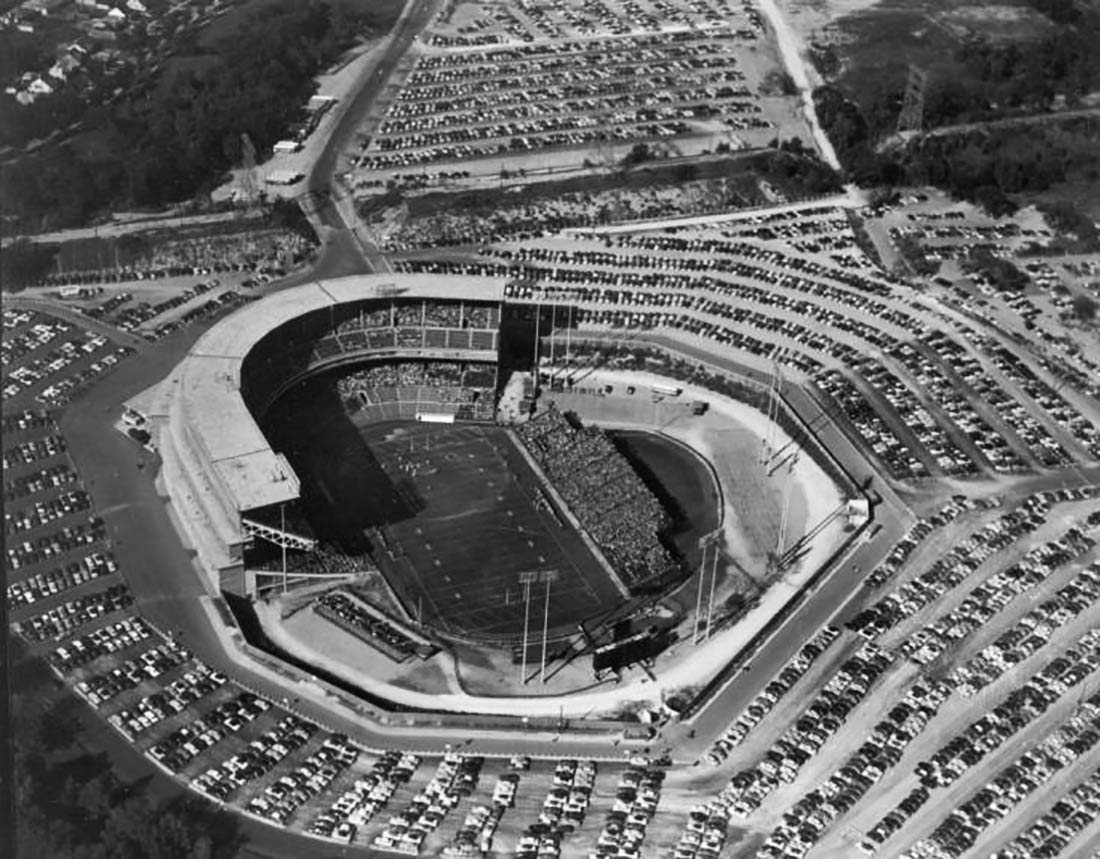 All night he’d been blessed with impeccable control – “I could have put a cup on either corner of the plate and hit it,” Haddix would later say. Haddix retired 36 consecutive batters in 12 innings, essentially relying on two pitches: fastball and slider. The challenge for him was that the Braves’ pitcher, Lew Burdette, was also pitching a shutout. Now, Burdette’s game was no perfect game: he gave up 12 hits over the course of 13 innings to the Pirates. The problem for the Buccos, was, however, that they just couldn’t close the deal. Every time they got close to scoring a run, something went wrong and the inning was over.

“Facing one of the National League’s most feared lineups, the 33-year-old was one out away from pitching the seventh perfect game in major league history. By now radio stations across the country, as far west as Los Angeles, and as far east as North Carolina, had picked up the broadcast of KDKA in Pittsburgh. Just outside Springfield, Ohio, Haddix’s wife, Marcia, sat in the family car in her mother’s driveway and listened to static-filled radio play-by-play.” (Chen, 2009)

Haddix’s perfect game bid ended in the 13th, when Pirates third baseman Don Hoak had a fielding error that allowed Felix Mantilla of the Braves to reach base. Mantilla then advanced to second on a sac bunt by the Braves’ Eddie Matthews, which was then followed by an intentional walk to Hank Aaron. So it was first and second with one out. 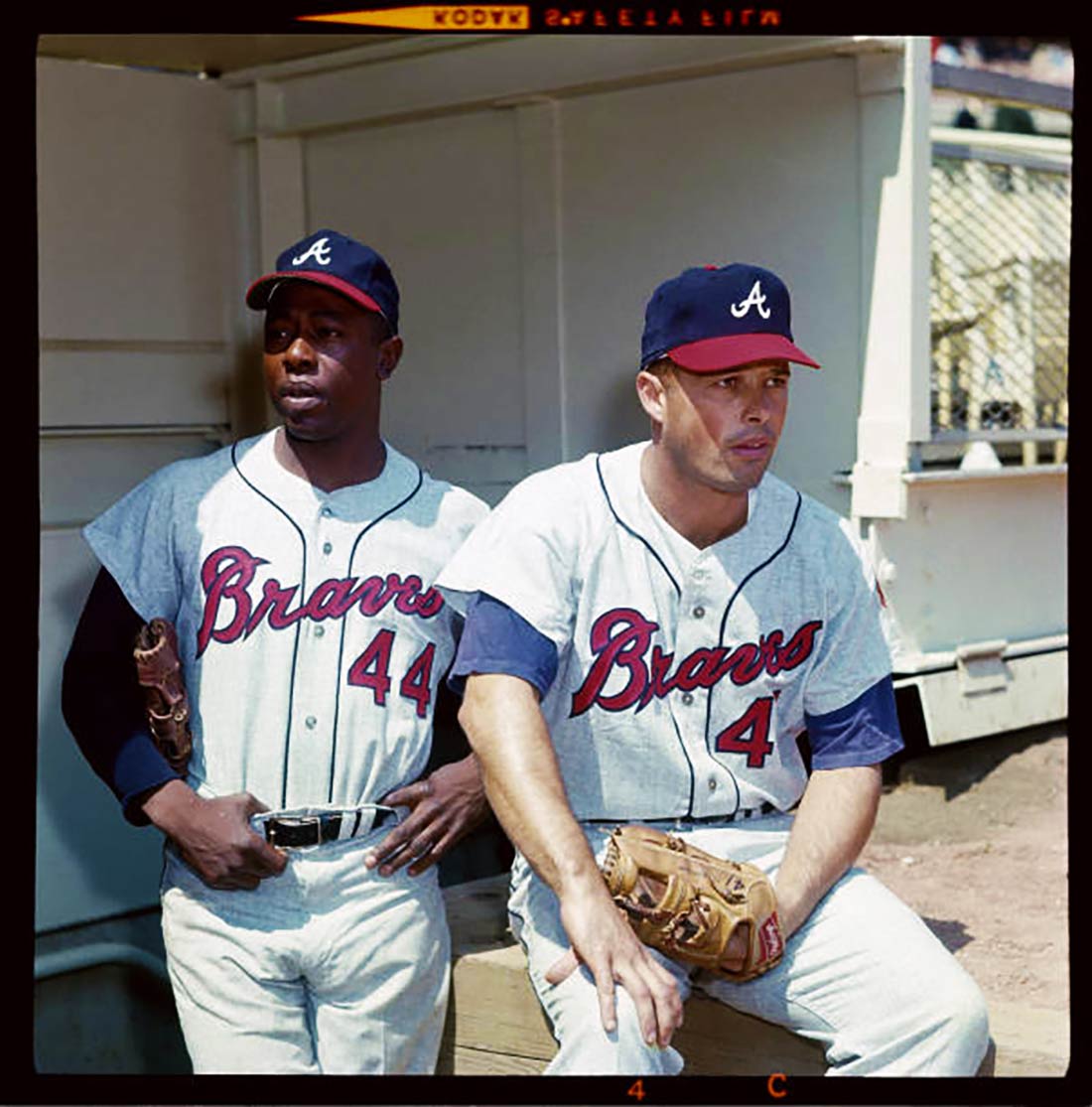 Joe Adcock of the Braves then came to the plate, and hit what was an apparent walk-off home run. In the confusion over whether it was actually a home run, though, Hank Aaron left the base paths and was passed by Adcock while he was running the bases, which was actually the second out of the inning. But due to the home run, the game was ruled to be over by virtue of a walk-off and the final score was booked as 2-0. (Remember, there were no manager challenges nor instant replays in those days. Whatever the umps on the field said, went.)

As a postscript, eventually, the Adcock hit was changed from a home run to a double by a ruling from then National League president Warren Giles – so ultimately, only the lead runner’s, Mantilla’s, run counted, resulting in a final score of 1-0; but the Pirates and Haddix still lost the game. 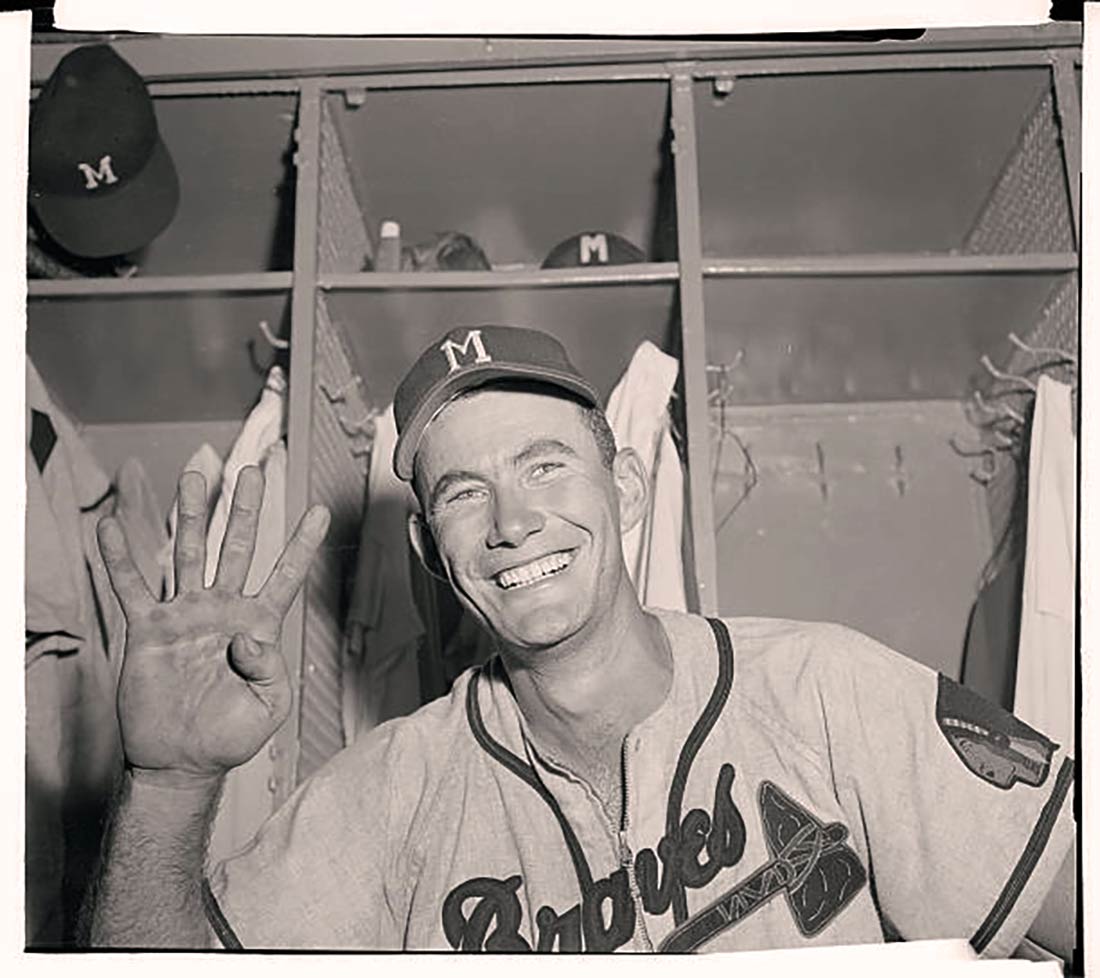 (Original Caption) Joe Adcock of the Braves smiles triumphantly in the dressing room after tying a major league record by belting four home runs in the game with the Brooklyn Dodgers today at Ebbets Field. Joe holds up four fingers, each signifying a run. He also shatters another major league record with 18 total bases. Braves booted the Brooks, 15-7.

Haddix’s 12 and 2/3-inning, one-hit complete game, against the team that had just represented the National League in the two previous World Series, is considered by some to be the finest pitching performance in MLB history. (Recall: In that fateful 13th inning, there was an error, a sac bunt, a walk, and a double. Still just a one-hitter.)

Pirates second baseman Bill Mazeroski later said of Haddix’s dominance in the game, “Usually you have one or two great or spectacular defensive plays in these no-hitters. Not that night. It was the easiest game I ever played in.” 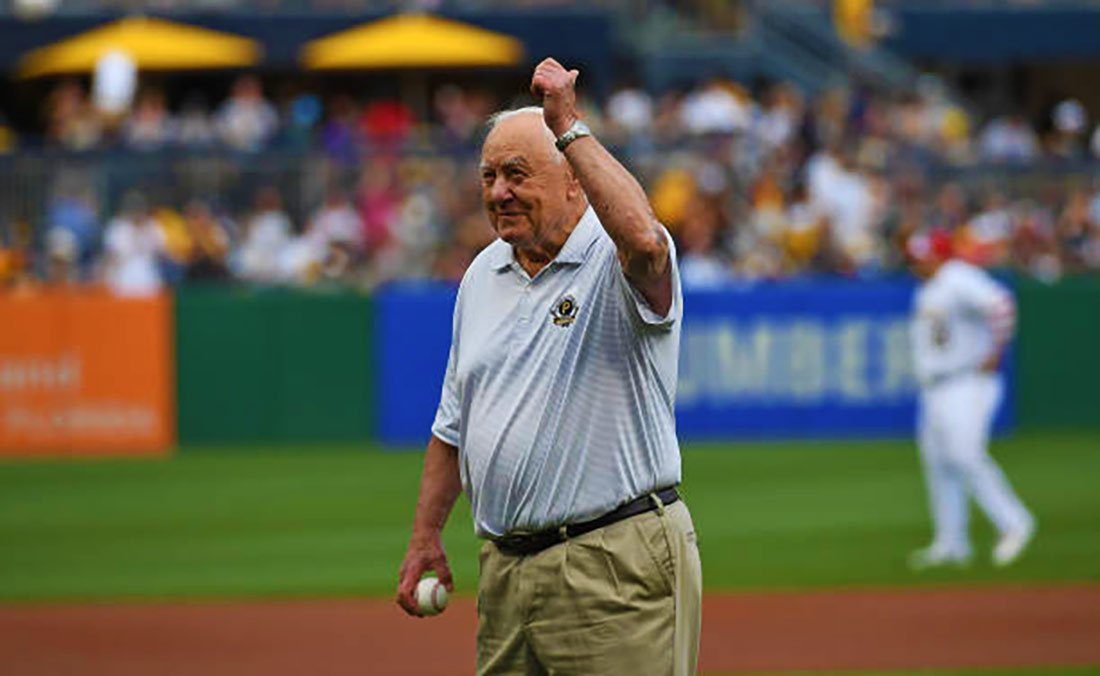 Baseball Hall of Famer Bill Mazeroski waves to the crowd before throwing out the first pitch before the game between the Pittsburgh Pirates and the New York Yankees at PNC Park on July 5, 2022 in Pittsburgh, Pennsylvania. (Photo by Justin Berl/Icon Sportswire via Getty Images)

Remarkably, Haddix’s dominance becomes all the more outstanding when you realize that all but one of the Braves’ hitters knew which pitches were coming. In 1989, when a number of players from both teams were present at a banquet in Pittsburgh commemorating the game’s 30th anniversary, former Milwaukee pitcher Bob Buhl pulled Haddix aside. “You know we were stealing signs during the game?” he asked. Buhl told him that pitchers in the Braves’ bullpen peered through binoculars to pick up the signs Pirates catcher Burgess was flashing to Haddix. One reliever then signaled the batter: towel on the shoulder meant fastball, no towel meant breaking ball. All but one Milwaukee hitter, Hank Aaron, took the signals.

There was no digital equipment involved; but this was still sign stealing at its very best.

Haddix went on to the Baltimore Orioles to finish out his on-field career, where Hall of Fame pitcher Jim Palmer said he learned a lot from him.

Haddix retired as a player in 1965 at age 39 and then spent 14 years as a pitching coach for the Reds, Mets, Red Sox, Indians, and Pirates. In Boston the man at the gate at Fenway Park always called him “Harry,” thinking he was Harry Brecheen, the St. Louis player for whom Haddix had originally been nicknamed “The Kitten.” Harvey Haddix never bothered to correct him.

But back in the day when using an effective two-pitch arsenal was all a top pitcher needed to be successful on some days, Harvey Haddix was one of the toughest in the game to face.

No other pitcher in the history of MLB has ever taken a perfect game past the ninth inning.

previous article
The Life of Brian
next article
Fastballs Forever 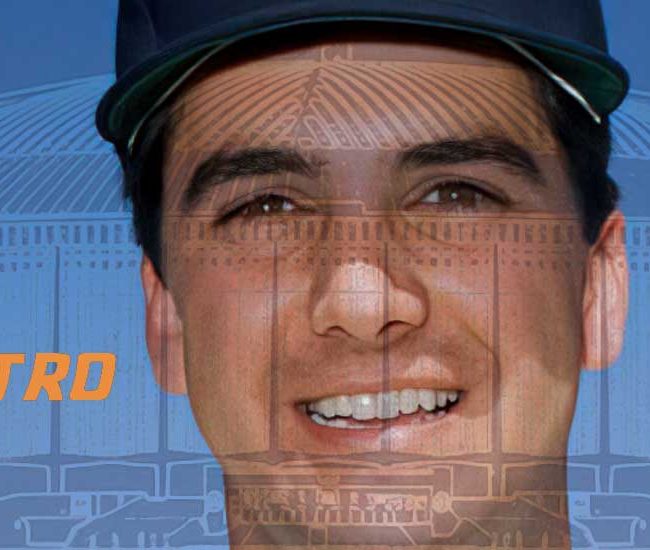