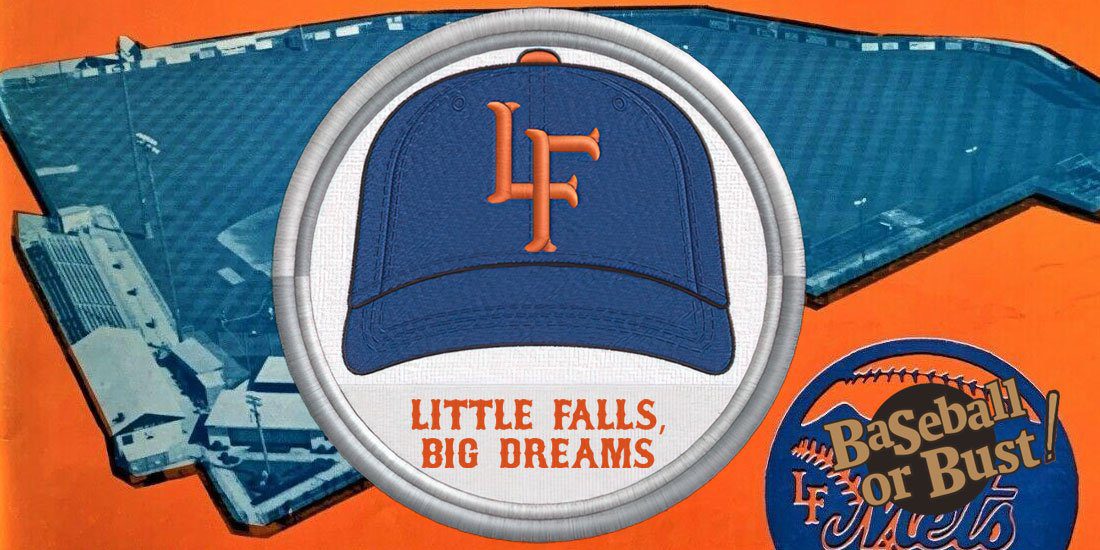 LITTLE FALLS, N.Y. – Follow NY-5S East through German Flatts up into the beautiful Mohawk Valley. In this pastoral part of upstate New York, there used to be a Mets farm team in a league that no longer exists, the New York-Penn League.

This was home to the Little Falls Mets.

From 1977 through the 1988 season the Mets short season Class A team played at Veterans Memorial Park in lovely Little Falls, N.Y. This is one of the prettiest stops in My Baseball Summer, a BallNine series of unique baseball travels. Visiting such Lost Ballparks brings the game home to me in a much different way than going to a Major League stadium.

This becomes a veritable baseball time machine. I don’t want these parks to be forgotten. All kinds of careers started in the NY-Penn League and so did lifelong friendships.

Sometimes it is good to get away from the modern game of bat flips, phone flips and now even ringworm.

It is important to take time to appreciate baseball’s past and the places that molded the game and the young men who played the game. Little Falls, N.Y. is such a place.

Get off the beaten path and discover America.

Baseball was a much simpler game then and that is why this week in Baseball or Bust I am taking you to this quaint ballpark in a once proud league that is no more, a time when the whole town would get behind the minor league team every glowing summer night at the ballpark.

The Little Falls Mets won only one NY-Penn League Championship in their 12 years of existence and that was in 1984 when Bud Harrelson managed them. That is why when you step through the gates of Veterans Memorial Park, which is located in a middle-class neighborhood, a place where true ballparks used to be, the first thing you see is a plaque dedicated to war veterans who made the ultimate sacrifice. To the right of that memorial is sign dedicated to the Mohawk Valley Baseball Hall of Fame that includes Bud Harrelson’s name.

“When the sun set in the third baseman’s eyes they always tried to steal third at that time (and it worked, too).’’

This is about pride.

Also included on that sign: the 1982 Little Falls High School State Championship team and the 1980 Herkimer American Legion State Championship team. Herkimer County was once the greatest cheese producer in America. One of the first canals in North America was built here to carry boats around the the major obstacle of the Little Falls rapids where the Mohawk River drops 40 feet in less than a mile.

Erie Canal Lock 17 remains an engineering marvel. The walls of pre-Cambrian igneous rock rise 300 feet. There is a stretch of the Mohawk River here that runs 150 feet deep, essentially a giant pothole cut in the rock created by a glacier.

Amazingly, the Little Falls canal lock is higher than any lock in the Panama Canal.

Getting around obstacles was the whole point of playing in the New York-Penn League where young players had to navigate “falls’’ that could spell doom for their careers.

A 17-year-old Dwight Gooden pitched here in 1982. A 17-year-old Wally Backman played here in 1977 and they would come together to help win the Mets’ second championship in 1986. Mets fans can only hope that the 2022 Mets, who seem to play the game in a complete fashion under Buck Showalter, will deliver that elusive third World Championship.

I reached out to a number of former players and managers, including the manager of the 1985 Little Falls Mets Dan Radison and all had fond memories of not only playing at this ballpark but in this small town and remarkably, everyone I was in contact with said it was the kindness of people of Little Falls that they remember the most, that, and Veterans Memorial Park had perhaps the best groomed infield in professional baseball.

And here is your little-known fact of the day about the Little Falls Mets. 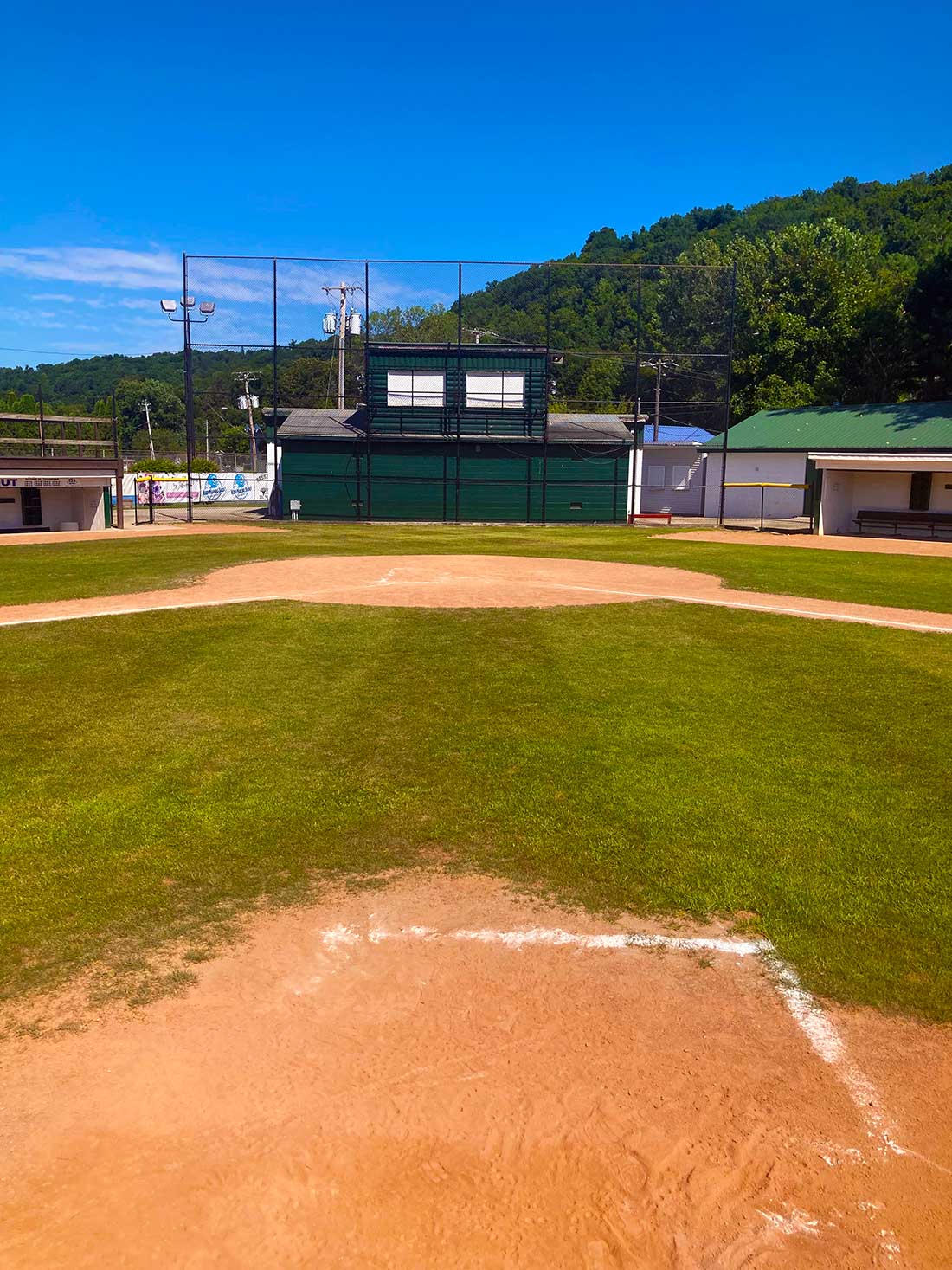 Over a three-year span from 1980-82 three players on the Little Falls Mets did not have stellar seasons but each went on to become general managers in Major League Baseball.

Yes, there was a time where general managers once played pro ball – and not just fantasy league baseball – and that gave them a most important perspective that is missing in today’s GM game, how tough the game is to play.

In 1980 Billy Beane, 18, the Mets first-round draft pick that year, and J.P. Ricciardi, 20, were teammates and let the record show that Beane hit .210 that season while Ricciardi out-hit him by one point, hitting .211. Beane, of course, went onto Moneyball fame with the Oakland A’s and is in the middle of yet another cost-cutting rebuild with the A’s. Ricciardi went on to become GM of the Toronto Blue Jays and is currently a special advisor with the San Francisco Giants. 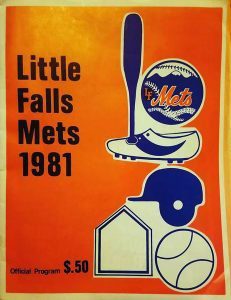 “Best infield I ever played on,’’ Ricciardi told BallNine. “The infield was like a putting green. That’s the first time I met Billy Beane and we have been lifelong friends since then. Got my first pro hit in Jamestown, N.Y., home of Lucille Ball.’’

Ricciardi went on to work with Beane in Oakland in 1997 as he became Director of Player Personnel. The year before, A’s GM Sandy Alderson, hired Ricciardi as a special assistant.

Who was the third GM to come out of that three-year span of the Little Falls Mets?

Dan Radison went on to a lifetime of coaching in the majors and minor leagues but said he wasn’t a very good manager at the time in 1985 but just like Ricciardi said, he remembers the infield at Veterans Memorial Park as being “immaculate.’’ He noted the food was fantastic in Little Falls too, especially the Italian food and added, “the people of Little Falls were so kind to us all.’’ 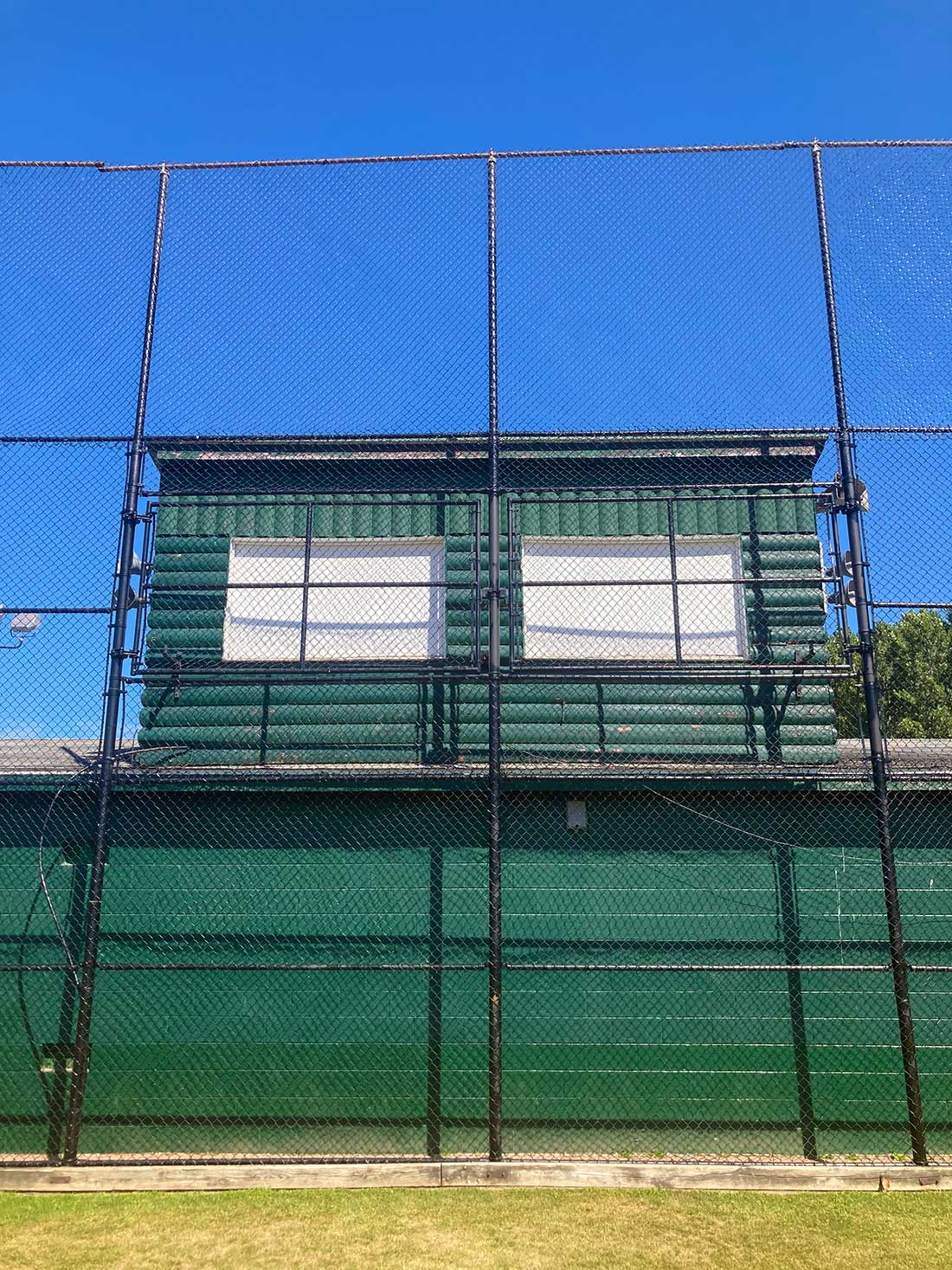 That is a recurring theme and speaks volumes about the town and the memories of not only baseball but how young players began their pro careers. There is a lot to be said for that.

The ballpark, which opened in 1949, is now host to the Mohawk Valley DiamondDawgs of the Perfect Game Collegiate Baseball League. The field is still in pretty good shape, nothing like it once was when players said it was better than most major league parks. A couple things struck me standing on the same mound where Doc Gooden pitched: The dimensions are huge, 373 down the left field line and 378 to right, so this is a pitcher friendly park. And I have never seen a park where the press box behind home plate is constructed of logs – a log cabin look and feel to it – all painted green.

In the men’s room there is a tile mosaic proudly showing the name of the town: Little Falls.

For those looking for nostalgia there is a classic “No Pepper’’ sign along the fence behind the first base coaching box. Players are told in no uncertain terms:

“No Pepper In Infield

Loosen Up In Outfield.’’

Perhaps that’s one of the reasons why the infield grass was “immaculate.’’ 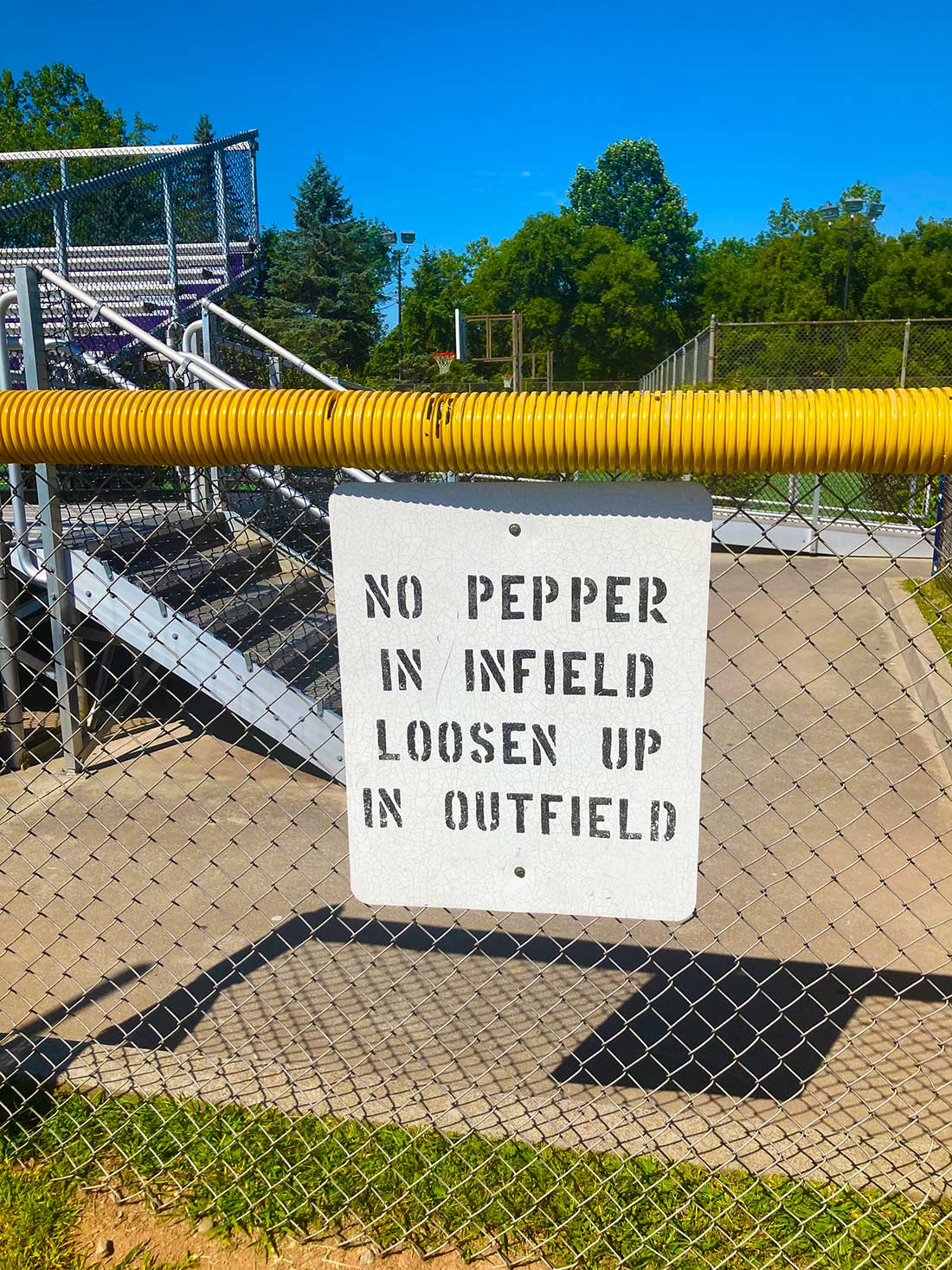 The first base dugout is the Ted Schoff Dugout. He was the high school baseball coach in Little Falls for 31 seasons and won 533 games. His name is on the Hall of Fame sign out front. Since this ballpark sits in the middle of a neighborhood you can just imagine the foul balls clanking off nearby homes in the days of the Little Falls Mets.

The craft beer craze is all over upstate New York these days, but the Little Falls Mets might have been the first team to have a craft 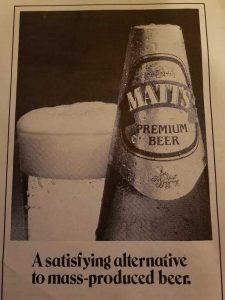 beer as a sponsor: Matt’s Beer, which was advertised in 1984 as “A satisfying alternative to mass-produced beer.’’

Talk about being ahead of your time.

Gary Allenson, a former catcher in the majors, managed the Oneonta Yankees and he told me playing in Little Falls was unique. “When the sun set in the third baseman’s eyes they always tried to steal third at that time (and it worked, too).’’

A little bit of a homefield advantage.

Today the Nerds might not let you steal third even if the third baseman is blinded by the sun.

By 1989, the Little Falls Mets were no more. The ownership group moved the club to Pittsfield, Massachusetts to play at Wahconah Park. Built in 1919, that ballpark features a most unique design flaw. The sun problem got worse.

The batter faces west instead of east so on sunny summer days there is a sun delay of about 20 minutes; so the batter is not blinded by the light and hit with a speedball as Bruce Springsteen might say.

Just another beautiful aspect of minor league baseball from a bygone era. 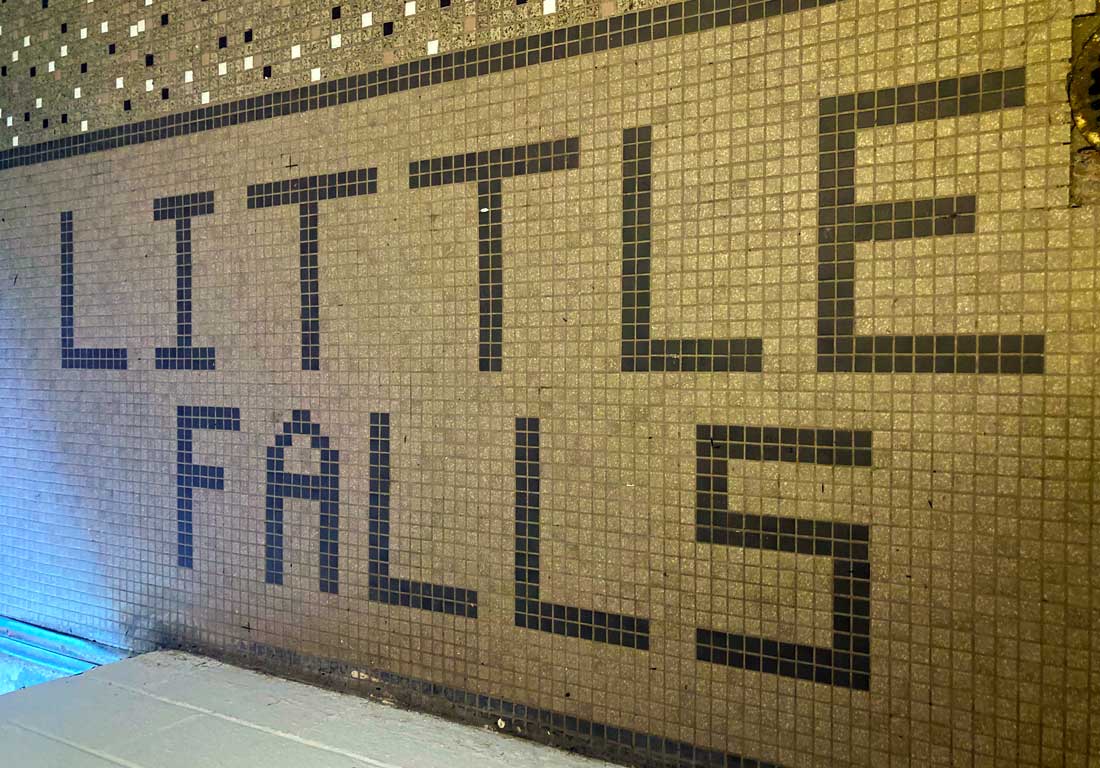 Former Pirates AA manager Dave Turgeon, now the National Team Head Baseball Coach at IMG Academy, played for the Oneonta Yankees in 1987, hitting .288. He told BallNine, “First pro game was in ’87. Lost a high chopper in the sun in the first inning. Had two knocks. Roy White was there. Gary Allenson was my skipper.’’

Lifelong memories were made in so many minor league ballparks like Veterans Memorial Park. The New York-Penn League was such a special league only to be destroyed by the drastic cutting of minor league teams by MLB.

This league started in 1939, then known as the Pennsylvania-Ontario-New York League and later shortened to the New York-Penn League when the team from Ontario left. In its last year of existence there were 14 teams that represented New York, Pennsylvania, Maryland, Massachusetts, Ohio, Vermont, West Virginia and Connecticut.

Now that league is called the High A East, there is another example of the loss of romanticism in baseball, and only Aberdeen, Hudson Valley and Brooklyn are survivors from the NY-Penn League.

The spirit of the Little Falls Mets lives on because minor league baseball is a different, friendlier brand of ball. There is more room for error in the field and in promotions and the Little Falls Mets had just such an error on Opening Day in 1982. Four parachutists were to drop from the sky to deliver first pitches that day but the pilot mistook a softball diamond for Veterans Memorial Park and dropped them off-target about 10 miles away.

They arrived about 20 minutes later by car. When they did arrive, the crowd cheered.

Also on the Hall of Fame sign is the name Bud Fowler, who played in the area and once lived in Cooperstown. Fowler was inducted into the Hall of Fame a few weeks ago, a worthy tribute to the earliest known African-American player in organized professional baseball. He died in 1913 and is buried in Frankfort, N.Y., about 17 miles from this ballpark.

Cooperstown is 30 miles south in this most historic baseball area. And lovely little Cooperstown, home to the Baseball Hall of Fame, will be the next stop in My Baseball Summer. 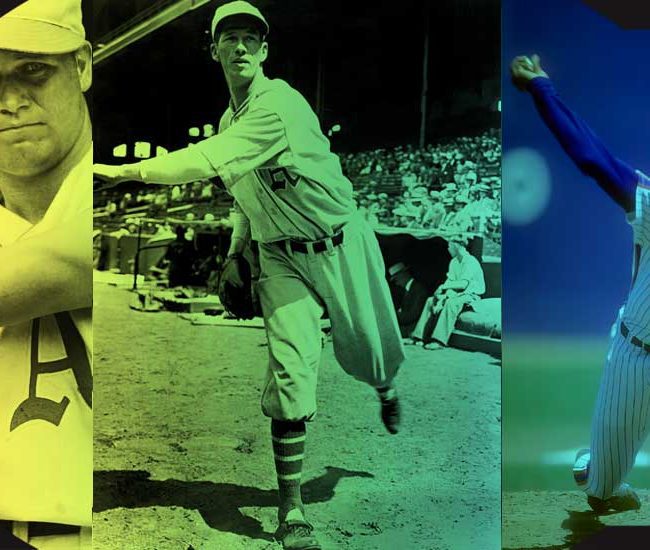 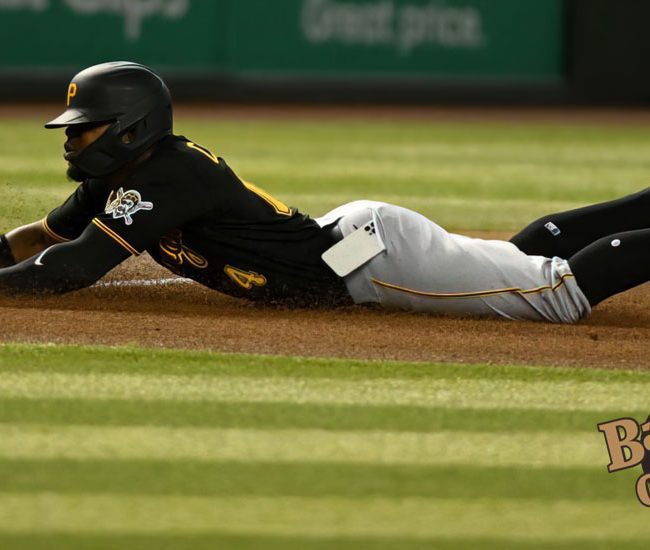 From Bat Flips to Phone Flips