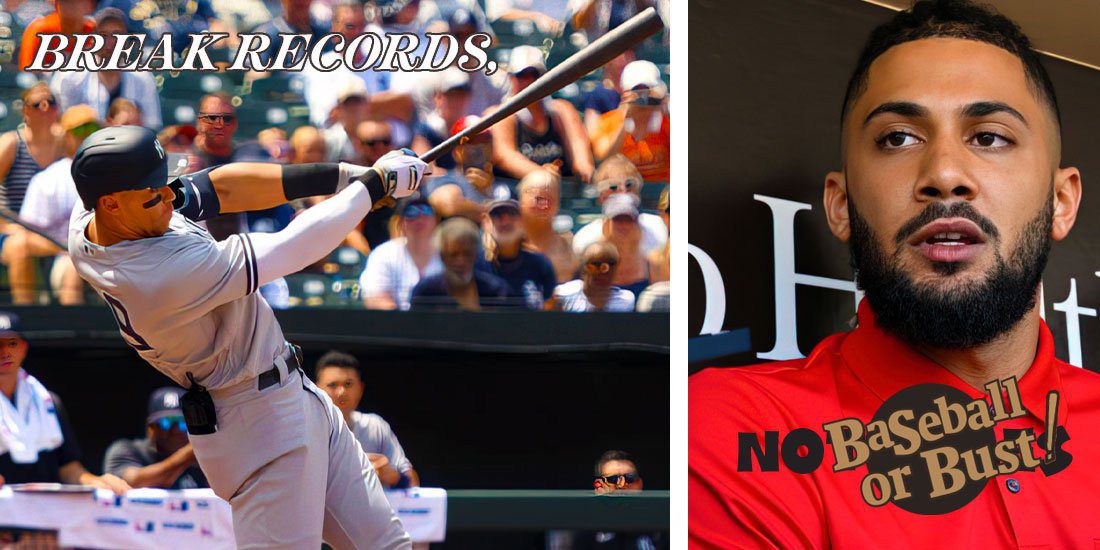 Not too long ago many players at the Little League World Series named Fernando Tatis Jr. as their favorite MLB player.

Three strikes and you’re out not only happens at the plate, it happens off the field too with decisions made by players.

Those Little League players are choosing players like Juan Soto and Aaron Judge as their favorite players.

You earn the reputation you deserve – and good for Soto and Judge.

I am especially happy for Aaron Judge, who has done everything right and had to sit back and watch clubs offer $340 million contracts to players like Tatis Jr. while Judge did not get the big offer until just before this season began.

Judge wisely turned it down with free agency right around the corner and at the time I said it was a great decision by Judge. Many questioned Judge’s decision and my stance as well; but it turns out Judge knew exactly what he was doing and is putting together one of the great pressure contract seasons in MLB history as he chases down Roger Maris’ record of 61 home runs.

Anyone who has passed Maris in the past in single season home runs has been linked to PED’s so Judge could be the first player to equal or pass Maris’ mark that is not PED-tainted.

Judge will get a monster contract out of this from the Yankees or someone else over the winter when he becomes a free agent.

There are so many lessons to be learned from the Tatis Jr. debacle, the first being do not put yourself ahead of the team. His Padres teammates are furious with Tatis Jr. – and don’t forget last year in the dugout when Manny Machado chastised Tatis Jr. for putting himself above the team, screaming: “Go play baseball … It’s not about you”.

Clearly, no lessons were learned after that by the selfish Tatis Jr.

While we are at it, I criticized Tatis Jr. a while back in Baseball or Bust for the pleasure he took in breaking the unwritten rules of baseball.

Remember the commercial for MLB The Show 21 when a defiant Tatis Jr. boldly stated – to a standing ovation from the “Let the kids have fun club’’ – that he was all about breaking rules?

“I’ve been asked to apologize for changing the game,’’ he said in the commercial. “Apparently I’ve been breaking the unwritten rules of baseball. I’m sorry if things got too exciting and this isn’t the game you remember. But here’s the thing, we are never going back.’’ 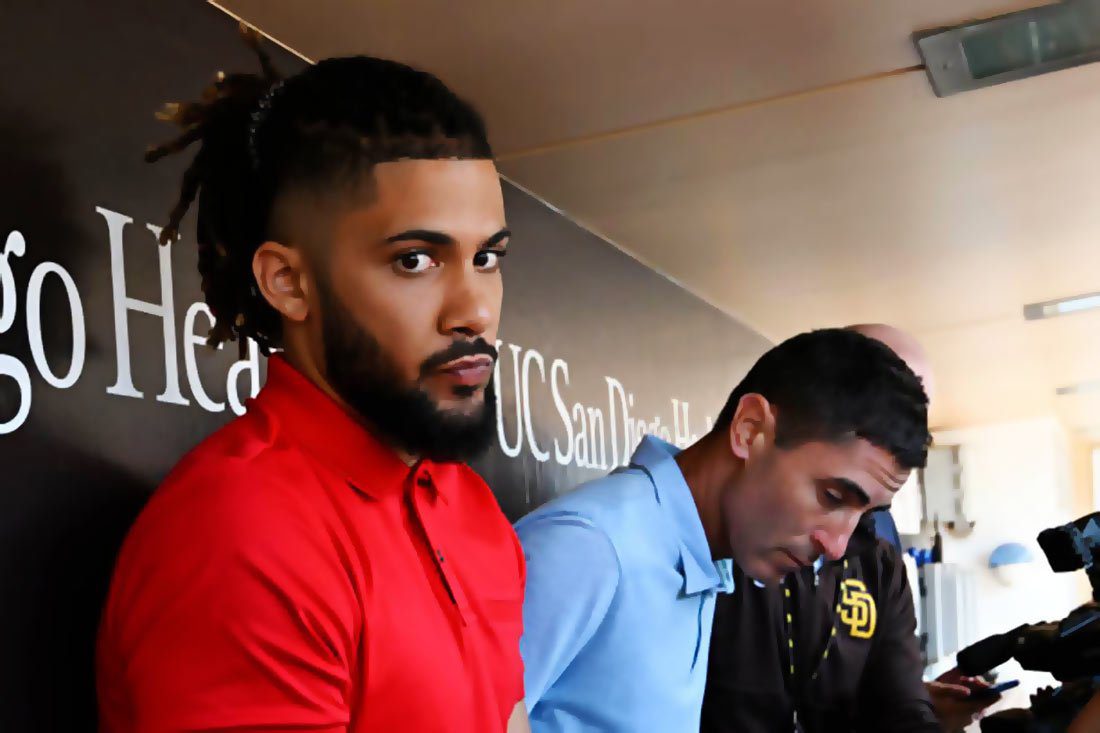 Fernando Tatis Jr. of the San Diego Padres sits in the dugout after a news conference before a game against the Cleveland Guardians August 23, 2022 at Petco Park in San Diego, California. (Photo by Denis Poroy/Getty Images)

Really, what do his teammates think of that now? We are never going back?

Apparently, Tatis Jr. has been breaking the written rules of baseball too.

And that wasn’t the only commercial where Tatis Jr. went by his own rules. For a sports drink called Bolt24 he proudly said in the commercial, “Being a rule breaker is not cool … Yes it is. Haha.’’

Is it still cool Fernando?

Is it cool to have A.J. Preller sit by your side on the bench as a babysitter when you offered your non-specific apology earlier this week? Preller, by the way, was a rule breaker too in his time.

Is it cool to let your team down at the most crucial stage of the season after ownership went out and gave you mountains of money and then acquired Soto for a ton of prospects to go along with Machado’s big contract? And now you are suspended. Is that cool?

Judge is always talking about the value of team and all that matters is winning. In that way he is built like Derek Jeter, the Yankee Captain. That’s cool.

Tatis Jr.’s game is all about the individual.

They certainly learned that Judge, 30, is much more mature. Judge was this mature when he first arrived on the scene with the Yankees in 2016 at the age of 24 and I was there to see it on a daily basis. There were lessons to be learned and by the next season Judge was rolling.

Being too cool for the old school crowd didn’t work out the way Fernando Tatis Jr. envisioned it, did it. Let the kids have fun is fine as long as the kids respect the team and their teammates.

There are many who want to continue to lower the bar and some are GMs in charge of teams, but it can’t be lowered.

A little thing caught my eye on the Yankees 4-2 win over the Mets Tuesday at Yankee Stadium. Judge hit a monster home run, everyone saw that in the fourth inning that put the Yankees on top, 1-0. Judge also got a huge, two-out RBI single in the seventh that put the Yankees up, 4-2, everyone saw that. He cut down his swing and lined a single to center on a hanging slider. He did exactly what he was supposed to do with that pitch in that situation. 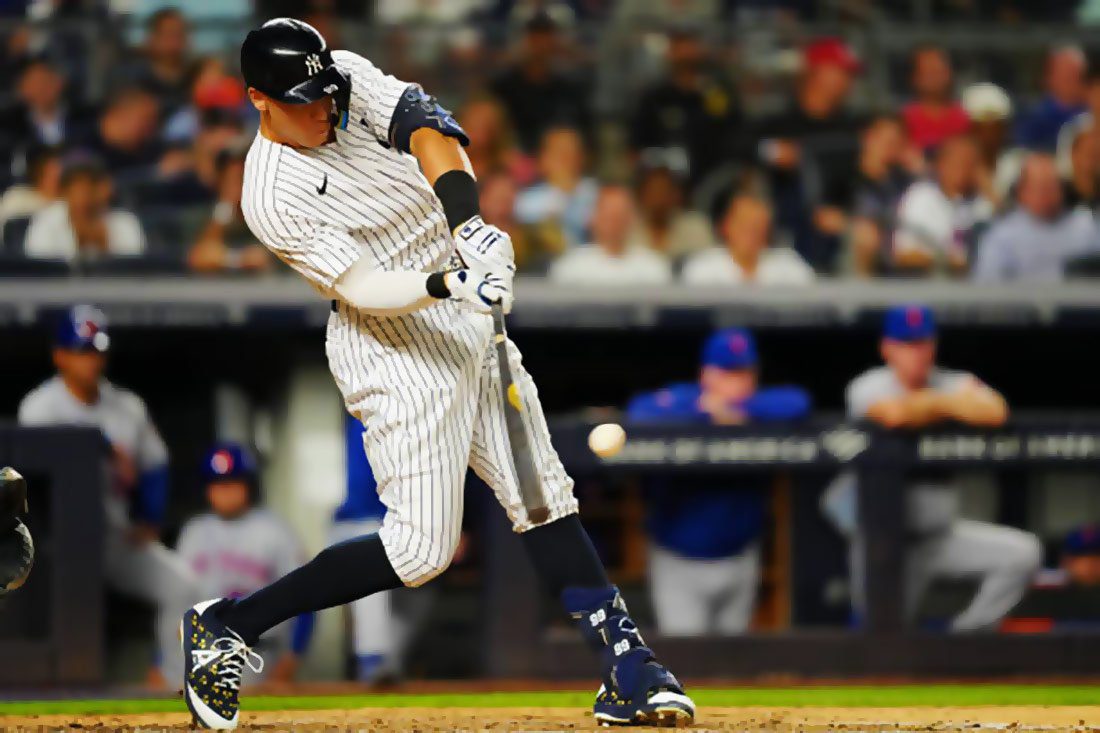 Here is what everyone didn’t see.

After the third out and Judge took off his helmet and hand guard, he politely handed the equipment to the coach to take back to the dugout and you could see him say, “Thank you’’ to the coach.

That is the little things being done correctly.

It’s like when I was the first to notice Judge as a rookie, after the inning would end with the Yankees on defense, he would hustle back to the dugout from right field and as other teammates would come into the dugout, he would pat them on the backside or shoulder and offer words of encouragement. A little thing done right.

From the moment Aaron Judge arrived, he was all about team.

From the moment Fernando Tatis Jr. arrived, he was all about “me.’’

Many in our society applaud that behavior. I don’t. Again, small things mean a lot and now the Padres are without Tatis Jr., while Aaron Judge is carrying the Yankees.

The Tatis Jr. situation also takes the spotlight off Judge when he should be the biggest thing in baseball right now with his Great Home Run Chase. Roger Maris, another Yankee who was all about team, produced 49 home runs after 124 team games in 1961.

Here we are 61 years after Roger Maris hit 61 in ’61 and Judge owns 48 home runs in 124 team games. Amazingly, he is only one home run behind Maris’ record pace when Maris beat Babe Ruth’s record.

This should be the biggest story in baseball.

Then 34 years later another Yankee slugger, Roger Maris blasts 61 home runs in 1961 to break the Babe’s record and Maris had to go through the gauntlet of beating Babe.

Then 61 years later – there is that number again – another Yankee slugger, Aaron Judge is battling the Babe and Roger for the true home run record. And Judge is doing this under the pressure of turning down the Yankees $213.5, seven-year extension when GM Brian Cashman put out the numbers for the world to see as if to say, “Hey, don’t blame us. We tried.’’

Of course the Yankees could have signed Judge to a much friendlier extension years earlier if they had the financial foresight, but they didn’t. 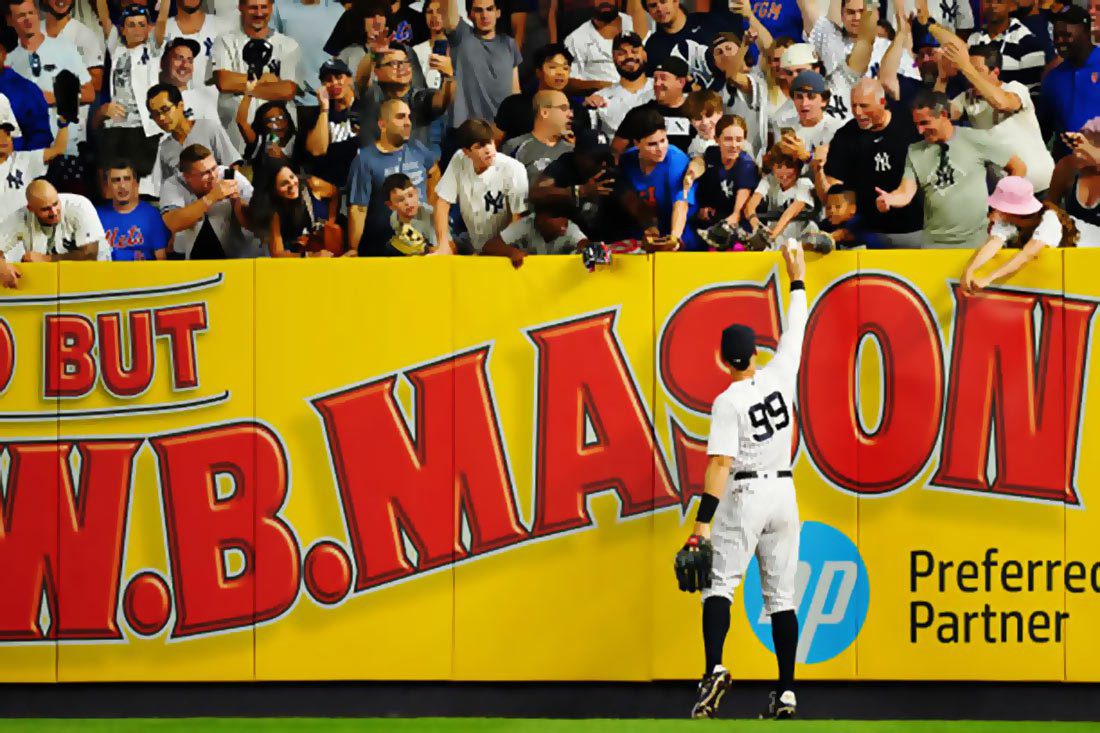 If Judge cracked under the weight of a contract run this season that would have been big news.

He bet on himself. The Big Man rose to the occasion and he is doing it with class and with the backing of teammates who know how important Judge is to them and the Yankees.

David Cone said it best Tuesday night when he noted, “Aaron Judge is in a league of his own.’’

And not just on the baseball field but in how he handles everything that goes along with being a Yankee and a Major League ballplayer. No other player can be Judge, but they certainly could emulate his style, his class on and off the field.

My hope is that Fernando Tatis Jr. takes a serious look at his approach and realizes he can still have fun, believe me, Aaron Judge has fun on a ball field and in life, but Tatis Jr. might learn to be more teammate oriented and a little more humble.

Remember when “Be Like Mike’’ used to be a thing?

Play by the rules and play with class. 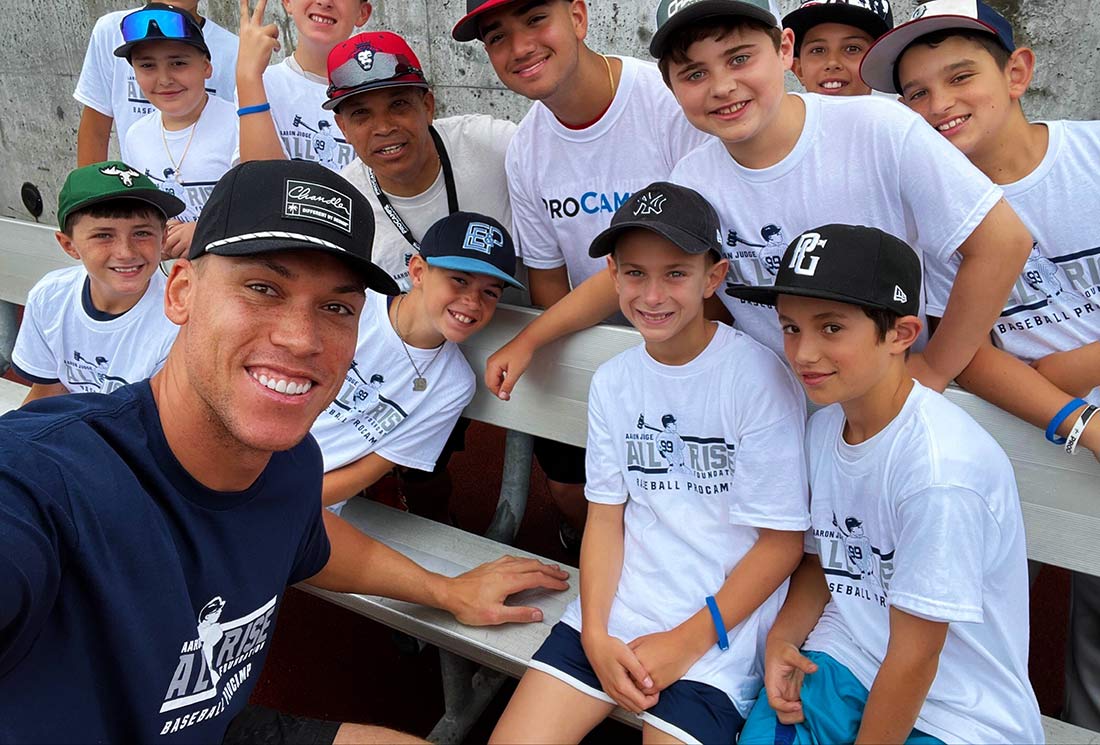 Photo courtesy of the All Rise Foundation

How about sending that message, baseball?

How about raising the bar? I want to see MLB have the guts to raise the bar. Not only in how the game is played – play it smart, play it for your teammates, play your best – but most importantly play with class. Play within the rules.

Tatis Jr. had it right the first time when he said, “Being a rule breaker is not cool.’’ Then he and the advertising folk had to be too cool for school adding the in your face: “Yes it is.’’

Pay more attention to the All Rise Foundation and the way Judge plays the game and wants youngsters to play the game.

Put the energy into not breaking rules, which someday can lead to the embarrassing situation of sitting on your team’s bench with the GM at your side and you offering non-specific apologies. I’m sure Tatis Jr.’s teammates let him have it when he finally met with them. Imagine what that moment was like and imagine if the Padres go on to have to success without Tatis Jr.

That is a tall task, and the Padres have roster issues because it seems Preller is good at getting big names but his lineup construction does not have the synergy to be successful, and the pitching staff cannot get the job done.

There is a lot to being a star but there is also a lot to being a good teammate to work together to win games. The Yankees may struggle in the postseason, but they have put themselves in a fantastic position going down the stretch and it is Aaron Judge who has carried the load. It is Aaron Judge who set the tone of success, with his hitting and moving from right field to center to help the team after doing what he had to do in the off-season to get himself ready to not only stay on the field the entire season – but to put up extraordinary numbers.

And just as importantly, all that while playing the game with class.

That is what’s important.

Those in and around baseball can’t continue to make excuses for Fernando Tatis Jr.

Sure, it’s great to play the game with energy, no problem with that. But if you promote yourself as a rule-breaker and you get caught breaking the rules after you did things your team did not want you to do, how is that good for the game?

Stop looking the other way baseball and start looking in the direction of Aaron Judge for true greatness.

Use all your God-given talent to break records – not break rules. 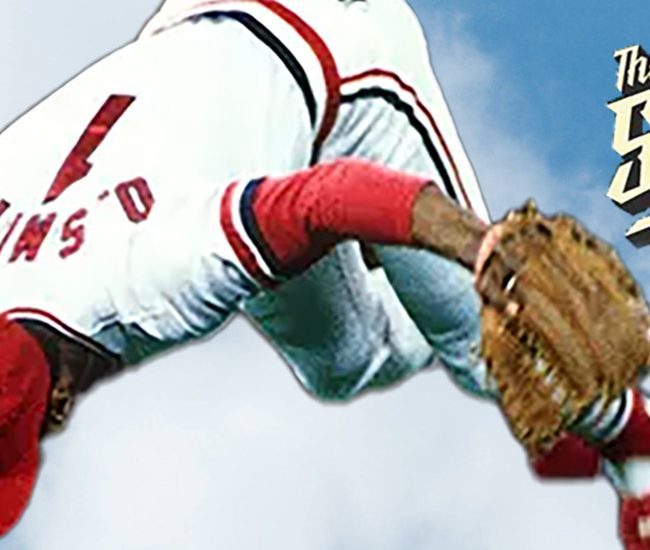