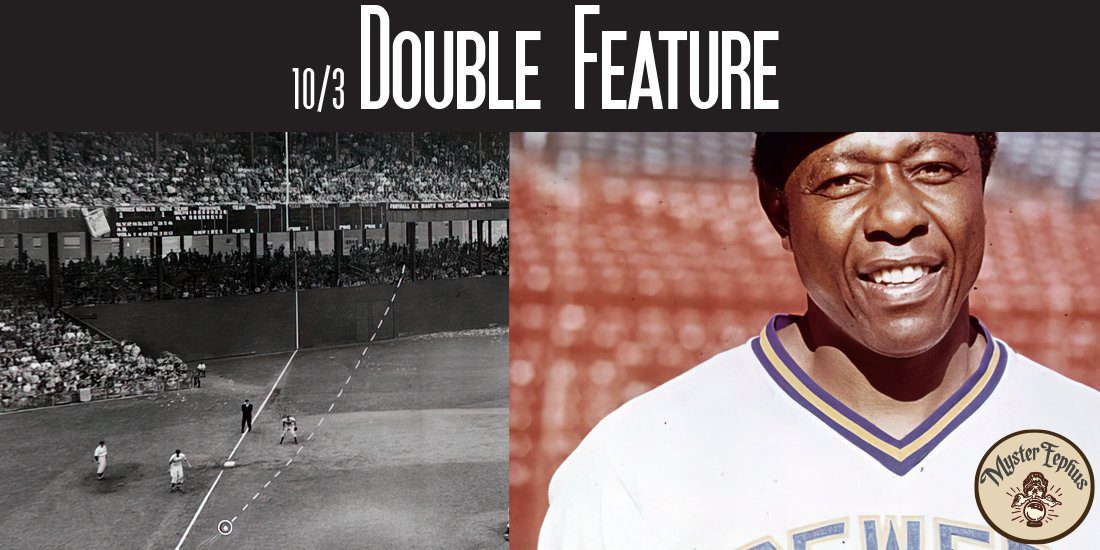 It’s been said if we look closely we are all somehow linked by six degrees of separation. Among one of baseball’s strange connections are two teams we rarely see in such matters.  One such degree of separation happened on October 3, albeit 25 years apart.

The answer to a trivia question is Carroll “Whitey” Lockman and Clint Hartung The question is who was on base when Bobby Thomson hit his “Shot Heard Round the World” on October 3, 1951. That’s the moment that will live forever.

Exactly 25 years later, Henry Aaron singled in a run in the sixth inning of a game between Detroit and Milwaukee on October 3, 1976. It was his last appearance in County Stadium, the old stadium where he first broke in. That is the footnote, an overlooked moment in one of the most significant baseball careers.

The New York Giants and Brooklyn Dodgers were tied for first place in the National League and faced off in a best-of-three series, the winner going on to face the New York Yankees in the World Series.

The teams split the first two games, and the Dodgers took a 4-1 lead in the bottom of the ninth at the Polo Grounds.

Alvin Dark opened the bottom of the ninth with a single, then Mueller singled, sending Dark to third. Monte Irvin popped up, then Wally Lockman doubled; Dark scored and Mueller slid safely into third base but hurt his ankle. He was carried off the field on a stretcher and Hartung replaced him. Can you imagine the angst felt by the Dodgers, Giants and the 34,320 fans in the Polo Grounds as they had to wait until Mueller was off the field and Hartung took his place? Then Thomson came to bat, with Willie Mays in the on-deck circle.

Fans know Ralph Branca lost that game, but how many folks know Giant righthander Larry Jansen won the game (his 23rd of the season) by pitching a one-two-three ninth inning in relief of Giants starter Sal Maglie?

Thomson was signed by the Giants when he was 18 years old in 1941. He played in five games in a D League that year, then spent the next three years in the military.

For the Giants, Thomson alternated between third base and all three outfield spots, and 1951 was one of his best seasons when he batted .291 with 32 homeruns and 101 RBIs – those figures include the Shot Heard Round the World and the three RBIs that came with it. He followed that by hitting 24 and 26 homeruns in 1952 and 1953, and drove in 108 runs each year.

Three years after Thomson hit his historic blast, he and Aaron became teammates.

Before spring training of 1954, the Giants traded Thomson and Sam Calderone to the Milwaukee Braves for Johnny Antonelli, Billy Klaus, Don Liddle, Ebba St. Claire and $50,000. 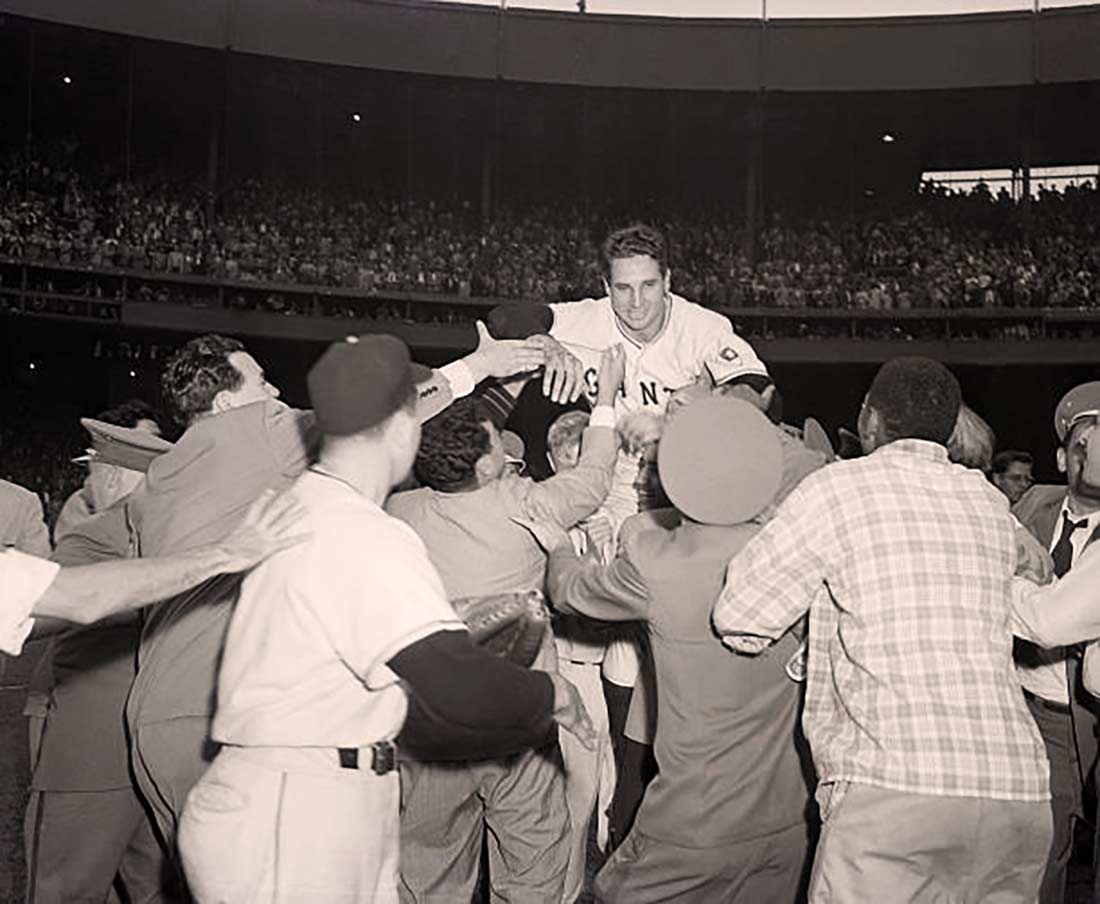 (Original Caption) 10/3/1951-New York, NY- With the Brooklyn Dodgers leading 4-2 in the last half of the ninth inning, Bobby Thomson hit a homer into the left field stands with two men on base, to give the Giants a 5-4 victory and the National League pennant. In a storybook finish to the playoff series for the pennant, happy and hysterical Giant fans carry Thomson on their shoulders and fight to shake his hand following his dynamite homer.

Thomson had been a solid player for the Giants, but he was going to turn 30 in 1954; perhaps that’s why New York traded him.

Also new at the Braves’ spring training site was Aaron, who was hoping to make the team.

Aaron, like Thomson, was only 18 when he signed his first professional contract with the Indianapolis Clowns of the Negro Leagues in 1952. The Clowns were not based in Indianapolis and never played in that city. The team was always on the road and never had a home field.

In 17 games with the Clowns, Aaron batted over .400. This caught the notice of scouts in the Major Leagues, and the Milwaukee Braves signed him. Aaron became the last man who played in the Negro Leagues to play in the majors.

Fortunately, Aaron became friendly with a family who had befriended black players before. The following year, he was assigned to the Jacksonville team in the Florida State League, which had desegregated only a few years before. He had a strong season and was named the league’s MVP.

Thomson played in only 43 games for the Braves in 1954. In 90 at-bats, he hit only .232 with two homeruns and 15 RBIs. He saw more action in the following two years. Then he went back to New York, when on June 15, 1957 the Braves traded him to the Giants with Ray Crone and Danny O’Connell for Red Schoendienst. Going back to the Giants cost Thomson a World Series ring (and a share of gate receipts) when the Braves beat the Yankees that October. 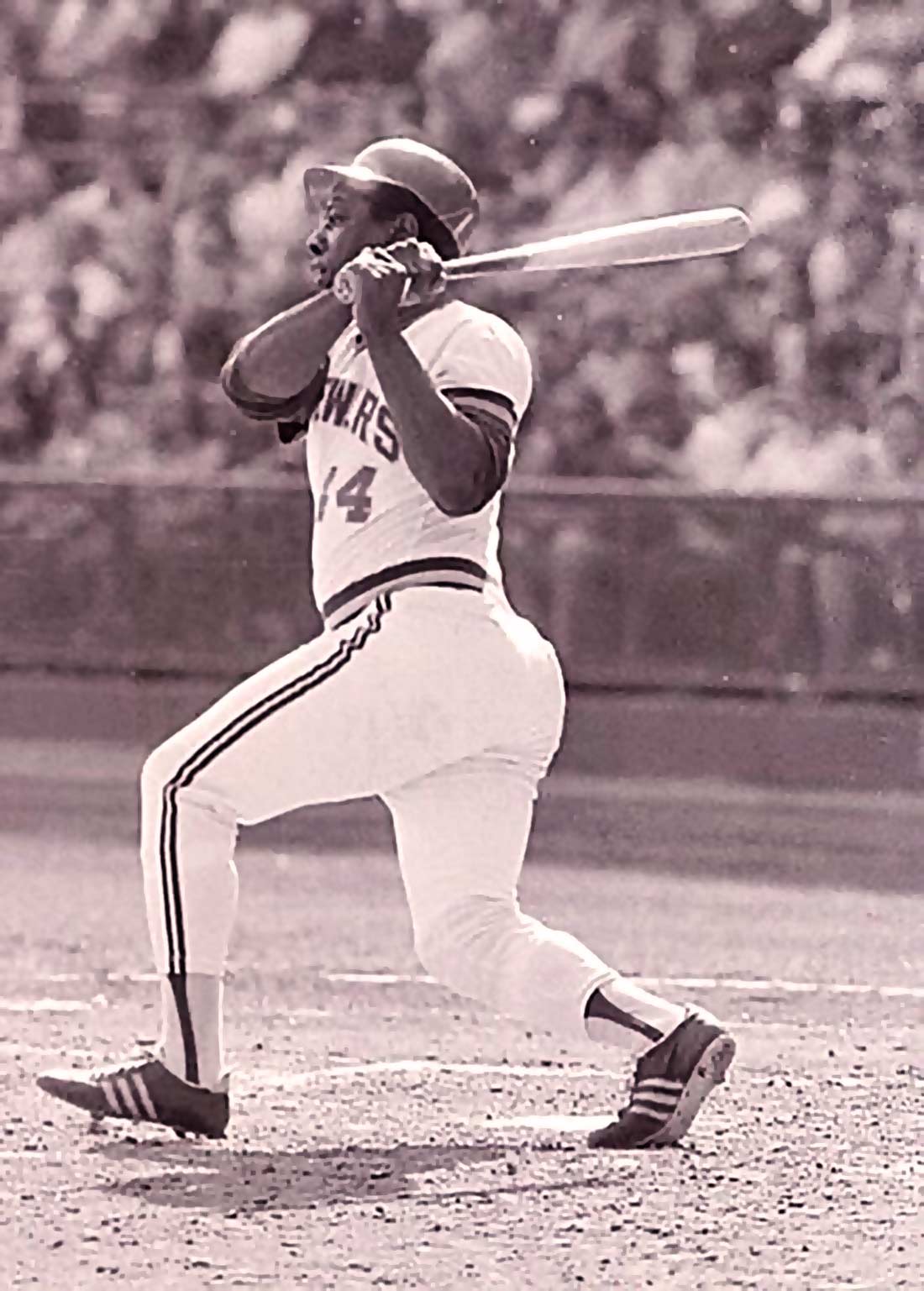 Hank Aaron #44 of the Milwaukee Brewers in his last at bat in the major leagues at County Stadium against the Detroit Tigers on October 3, 1976 in Milwaukee, Wisconsin. (Photo by Ronald C. Modra/ Getty Images)

Thomson started the 1960 season with the Boston Red Sox and in 127 at-bats hit .263 with five homeruns and 20 RBIs, but he was released on July 1. The Baltimore Orioles signed him on July 4, but he had no hits in six plate appearances and he was released three weeks later.

Aaron, of course, went on to break Babe Ruth’s record by hitting his 715th  home run on the second day of the 1974 season. Asked about it, Aaron maintained his most important homerun was in 1957, helping the Braves clinch the NL pennant.

When the season was over, the Braves assumed Aaron would retire. The manager’s job was open for the following season, but because the team’s management thought Aaron was stepping away, he was never considered for the position. Neither was his younger brother Ron, who managed the team’s AAA club. If either had been selected they would have become the game’s first black manager. Instead, he was traded to the Brewers, where he played for two years. 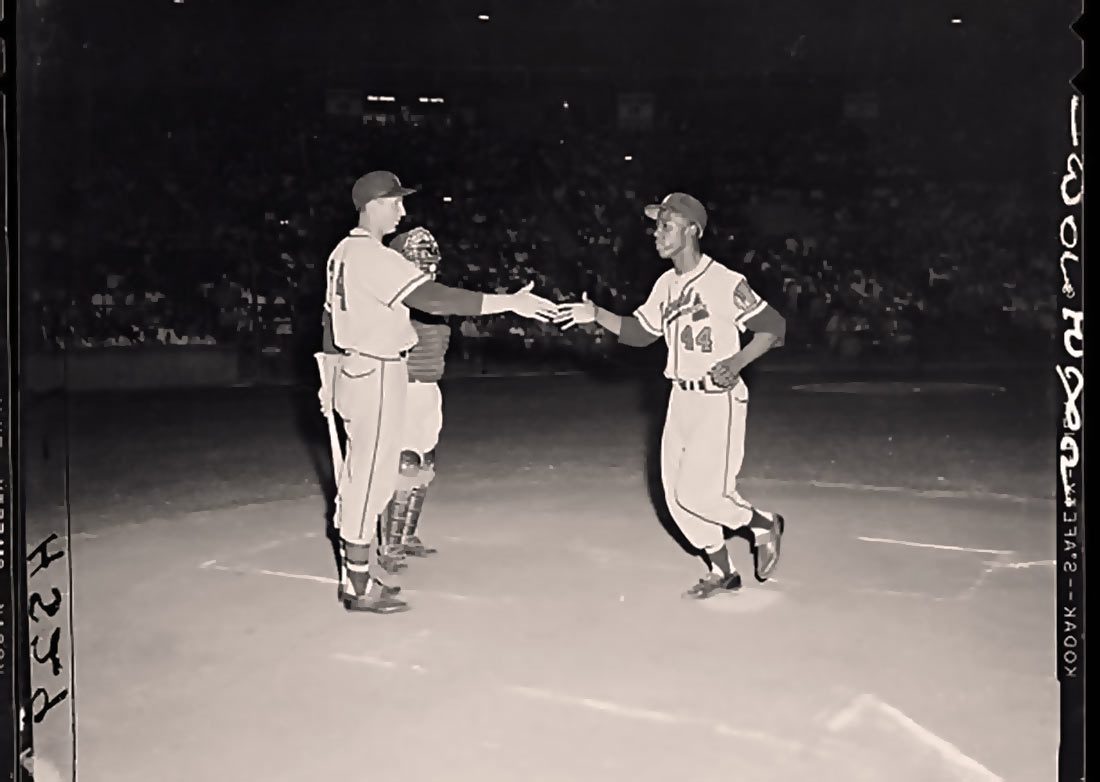 (Original Caption) Milwaukee Brave Hank Aaron (right) gets the glad hand at the plate from Bobby Thomson as he scores on his home run in the second inning of tonight's exhibition game with the Dodgers. Hank tagged hurler Roger Craig for the round tripper.

His last hit came off Detroit’s starter Dave Roberts, who pitched a complete game that day for his 16th win. (The last homerun Aaron hit was on July 20, 1976 in the seventh inning off Dick Drago deep to left field at County Stadium.) There was no pennant on the line – the Brewers finished last in the AL East that season . Only 6,858 fans were on hand to witness the conclusion of one of the game’s greatest players. (Only 10,544 fans were on hand to witness Williams’ final contest.)

There were two lesser-known aspects of his career that were trumpeted: he never struck out more than 100 times in a season, and if you took away his 755 homeruns from his career hit total, he’d still have 3,000 hits!

One of Aaron’s strengths, both as a person and ballplayer, was his equanimity; he never got too low or too high. That helped him survive the torrent of abuse he endured while chasing Ruth. It probably helped him as he was unjustifiably forgotten as the man who broke the unbreakable record, until his death in 2021, when belated recognition appeared.

Thomson and Aaron. That’s what life – and baseball – consists of; meaningful moments etched in memories, and moments that at the time seem obscure, but upon further reflection play an important role. Both types happened on October 3, in 1951 and 1976. 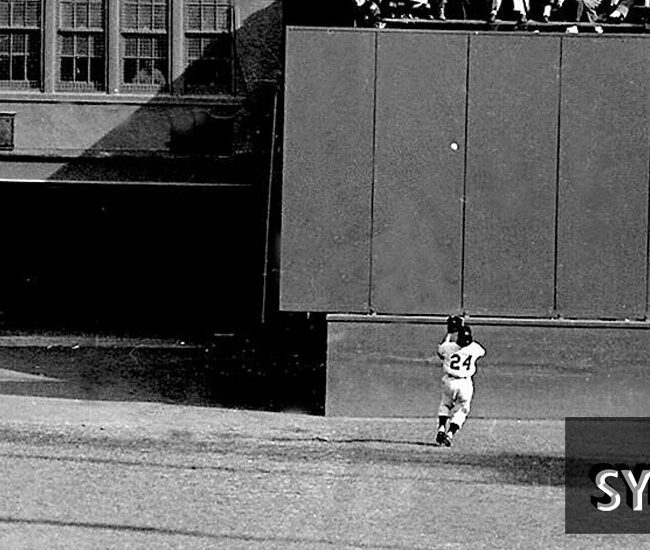 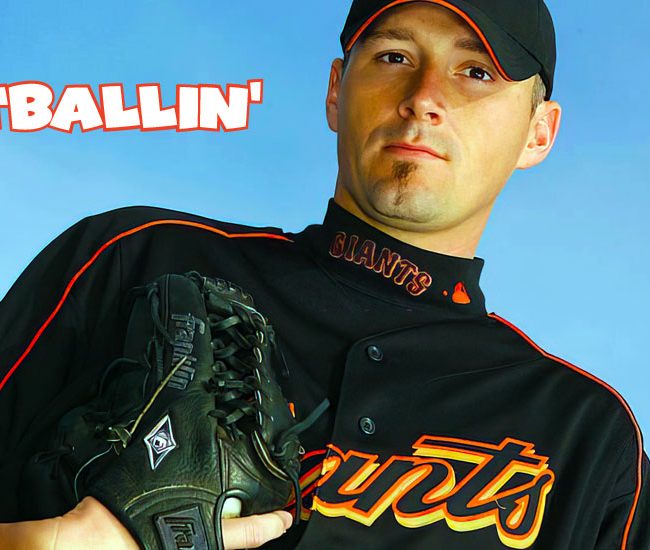