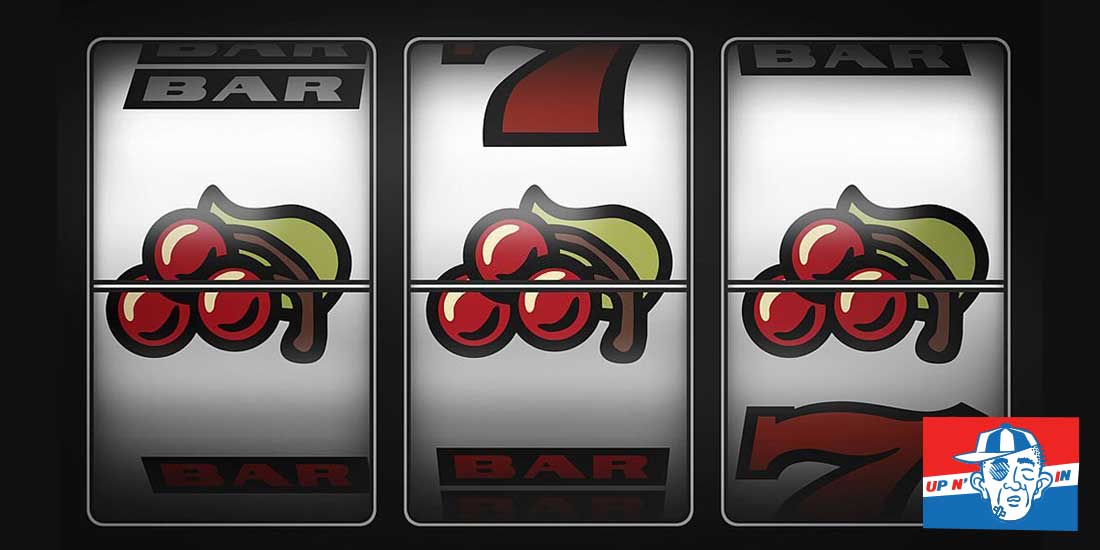 Every year as October rolls around, we begin to see predictions from both the prognosticators and the analysts – and now from the sports betting sites, as well – regarding which playoff team has the greatest odds of winning the World Series that year.

Prior to the season, these predictions are focused on which teams will even make it to the postseason; and this year, with a more expanded playoff group than we’ve seen in recent years, even just using a random methodology each team had a 40% chance of making the playoffs.

That resembles the postseason odds in the NBA and the NHL a little more than it used to MLB; but it almost became a 50% chance in the offseason – in negotiations between MLB and the MLB Players Association, when MLB was advocating a 14-team playoff group. The 14 was negotiated down to 12, and so here we now find ourselves.

No more one-game play-ins, no more one-game playoffs. Each playoff series is an actual series; and teams in the same division who were tied for win-loss records at the end of the regular season (this year, the Mets and the Braves) had their division winner versus wild card status decided by which team had the tiebreaker in the regular season series.

Of the 19 games played by the Mets and the Braves this season, the Braves won 10 and that gave them the edge for a division win and a postseason bye. It’s rather incredible, when you think about it, that a team with 101 wins and 61 losses can still end up a wild card team; but get used to it. If this kind of postseason arrangement stays in place or does get expanded to 14 teams or even more, team W-L records will become secondary and almost just happenstance in terms of who makes the playoffs and who doesn’t. 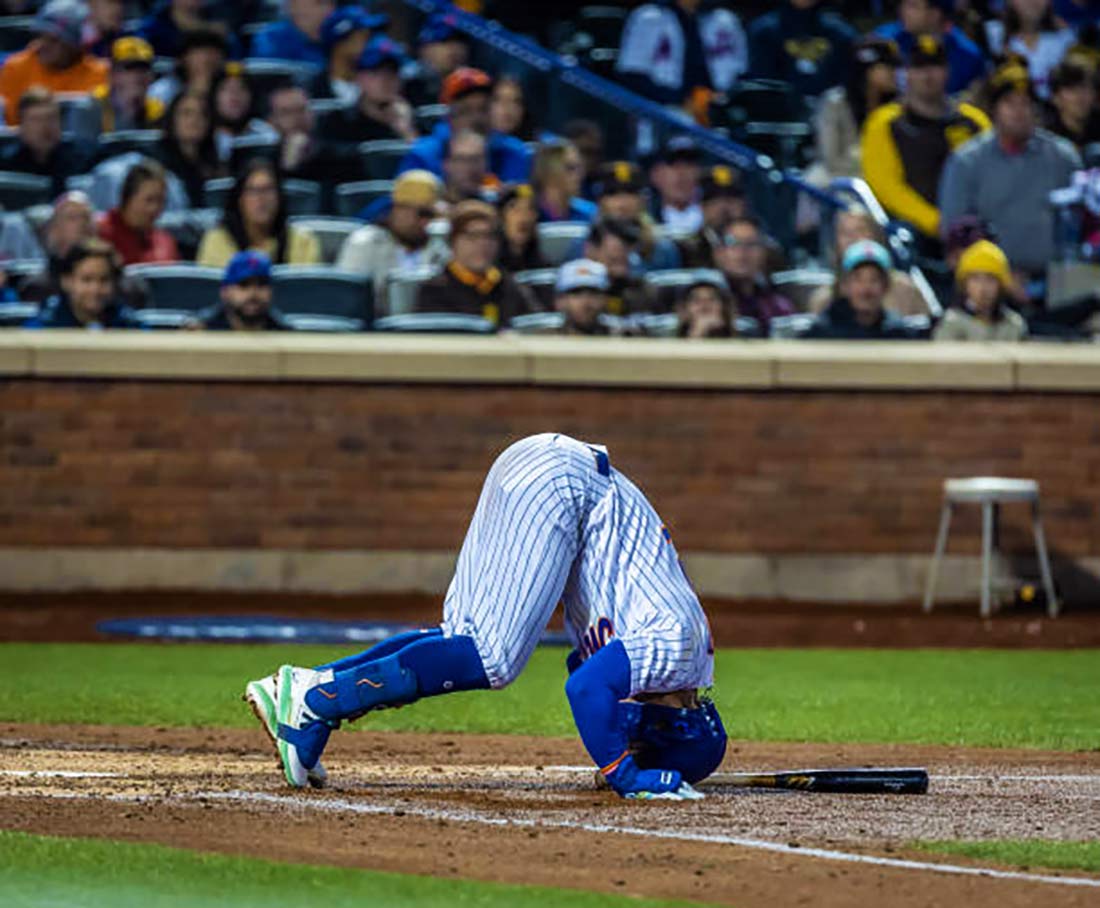 New York Mets Francisco Lindor reacts to the pain after fouling a ball off his leg in the 4th inning while playing the San Diego Padres in the best-of-three National League wild-card series at Citi Field in Flushing, New York on October 9, 2022. (Photo by John Conrad WIlliams, Jr./Newsday RM via Getty Images)

If you follow the NBA or the NHL, this type of occurrence doesn’t seem that shocking. But it’s definitely a whole new ballgame for MLB, which has gradually increased the number of teams making its playoffs over the past 27 years – with the introduction of the very first wild card teams in the American League and the National League in 1995. That season, the New York Yankees were the AL Wild Card team. The Colorado Rockies were the NL Wild Card team.

As a wild card team, the Yankees played a storied division series against the Seattle Mariners, who had won their division that season. Those were the days of Randy Johnson, Ken Griffey Jr., Edgar Martinez, Tino Martinez, and a very young Alex Rodriguez, for the Mariners. They were also the days of David Cone, Paul O’Neill, Bernie Williams, and the very beginnings of the “Core Four” for the Yankees – though Derek Jeter did not make the playoff roster that season, as of yet. The Mariners won that series, and advanced to the ALCS – which they lost to the Cleveland Indians. 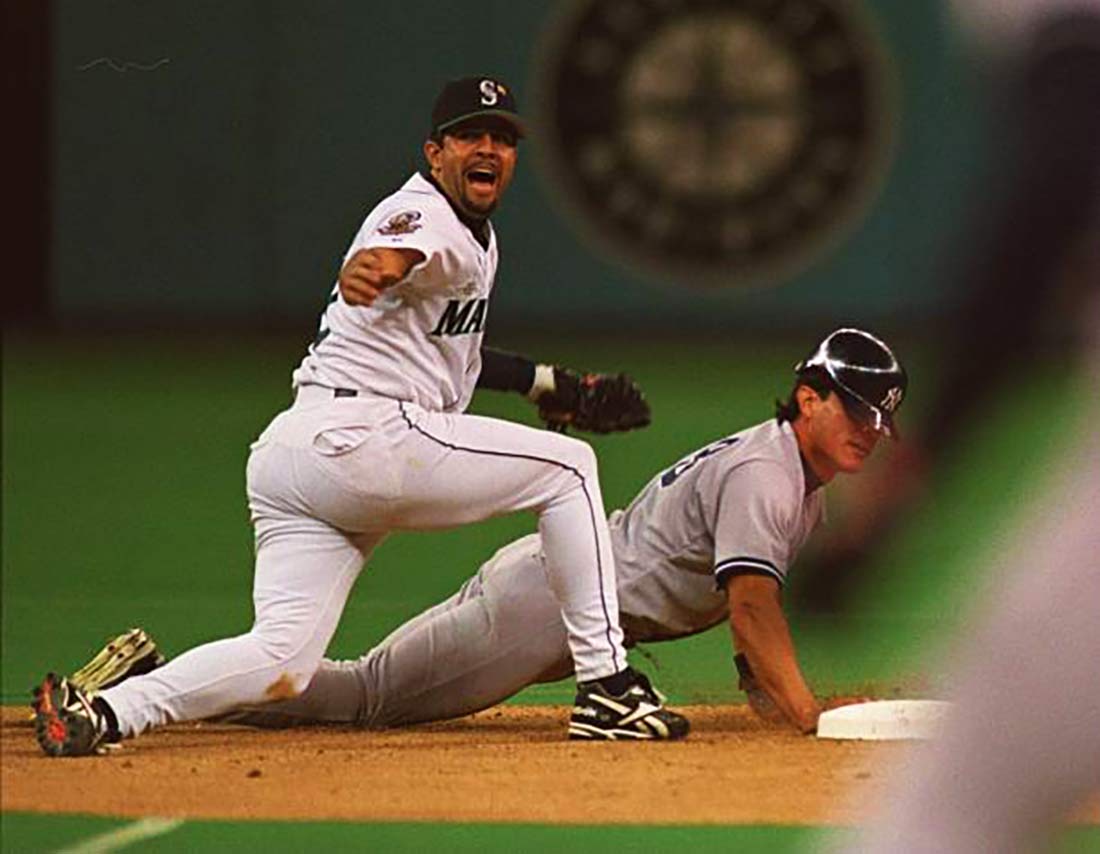 The Rockies featured a pretty serious roster that year, as well; led by Dante Bichette, Larry Walker, Vinny Castilla, and Anders Galarraga. They lost the NLDS to the Atlanta Braves, who had that dominant set of three starting pitchers who gave teams fits for years: Greg Maddux, John Smoltz, and Tom Glavine. The Braves were dominant throughout the ‘90s, although they had only one World Series win, in the end, to show for it. And that championship was, in fact, won in 1995.

It’s not surprising the Braves won the World Series in 1995. What is somewhat surprising, however, is that considering how dominant a team they were for about a decade, they didn’t win the World Series more than once during that stretch. And that brings us back to the prognostication part of this discussion with which we began: How useful have the analyses and the odds been over the years, especially since the introduction of the wild card, in predicting which team would actually be victorious in winning a MLB championship? 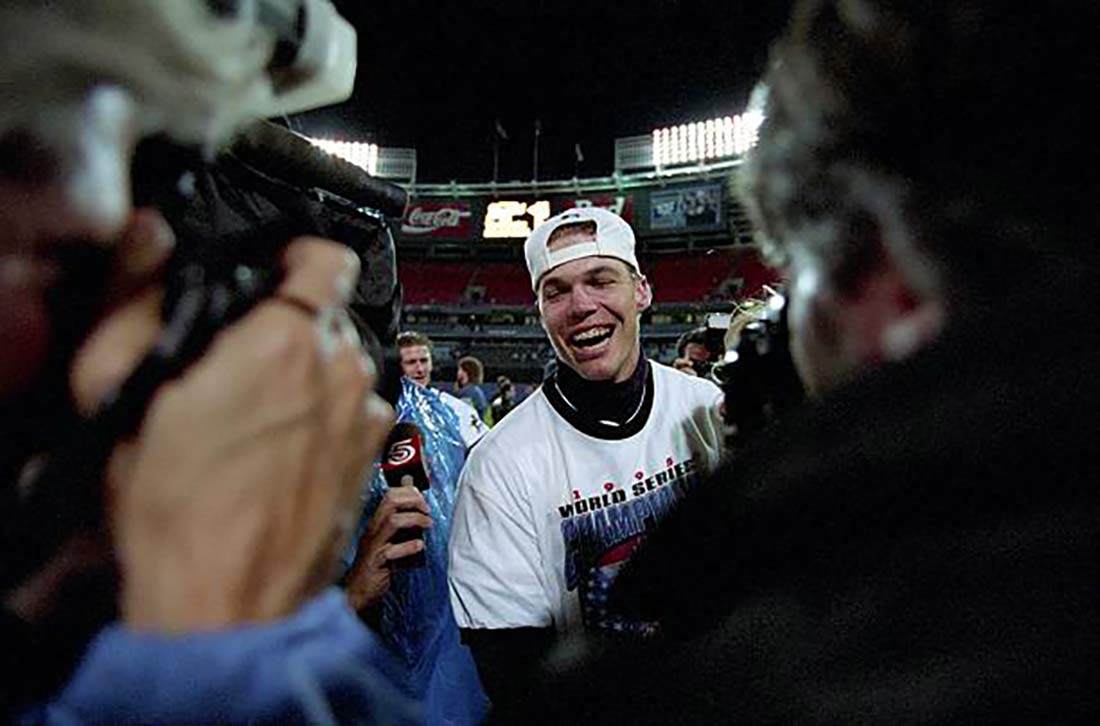 Chipper Jones #10 of the Atlanta Braves on the field after winning the World Series against the Cleveland Indians on October 28, 1995 in Atlanta, Georgia. (Photo by Ronald C. Modra/Getty Images)

Now, with an even more expanded field of teams being given a shot at winning it all, I would expect those odds and predictions to become even less reliable.

Here are some stark facts:

What this tells us is if you predict World Series winners on the basis of team W-L records or only division winners, you’ll probably be wrong about 25-50% of the time. The World Series isn’t just about playing by numbers.

Most published predictions these days are a little more sophisticated than that, however; and they take into account team power numbers, team pitching numbers and ratings, and even include player matchups and team/player performance in the relevant ballparks. In other words, to the extent possible, there’s some qualitative data in the mix – and not just quantitative data.

Nevertheless, I think you’d be hard pressed to find a prediction from a nationally recognized publication from 2019, for example, that had the Washington Nationals winning it all. 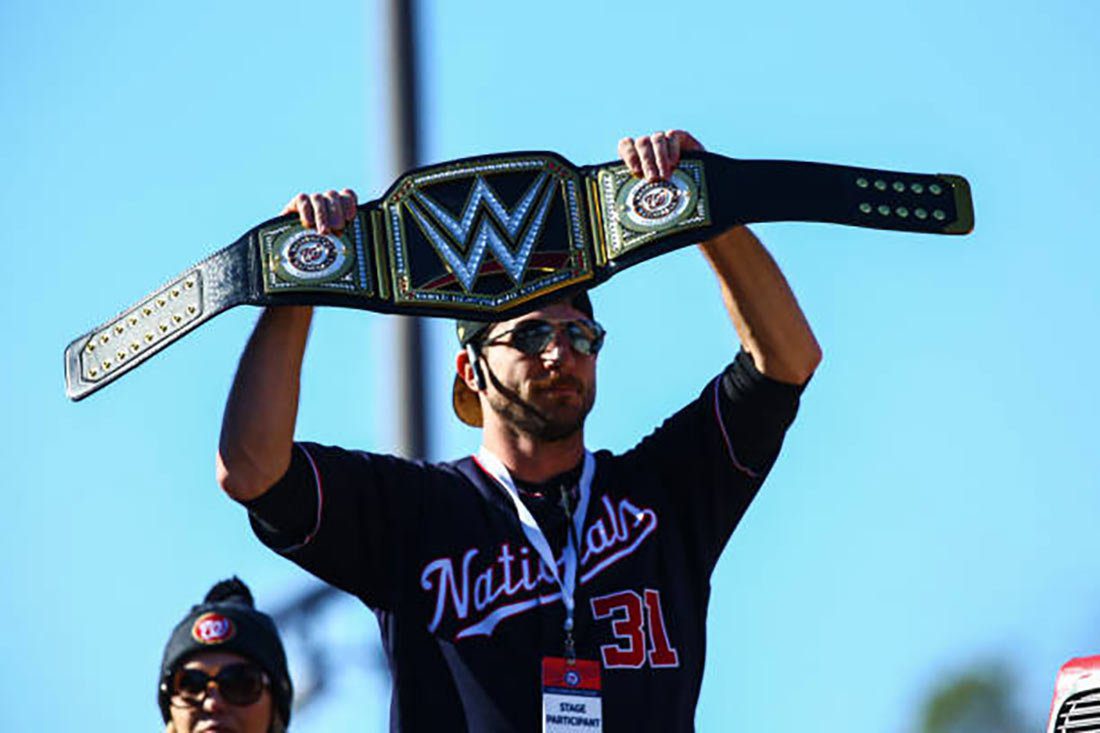 Similarly to the Atlanta Braves of the 1990s, the Los Angeles Dodgers have had an incredibly dominant past decade. Here are their numbers in the postseason since 2013:

The Dodgers are favored to win in almost every prediction you see this year, what with having had an all-time franchise best 111-win regular season record, and looking absolutely dominant almost all season long. Will they do it? Well, we’re about to find out – in just the next couple of weeks.

But what reminds me so much of the ‘90s Braves about these Dodgers is the number of World Series opportunities over the past ten years they’ve squandered – despite constant playoff appearances. Becoming a World Series dynasty is a lot harder than it looks; and there are no guarantees from season to season despite how good a team you put on the field each year during the regular season. 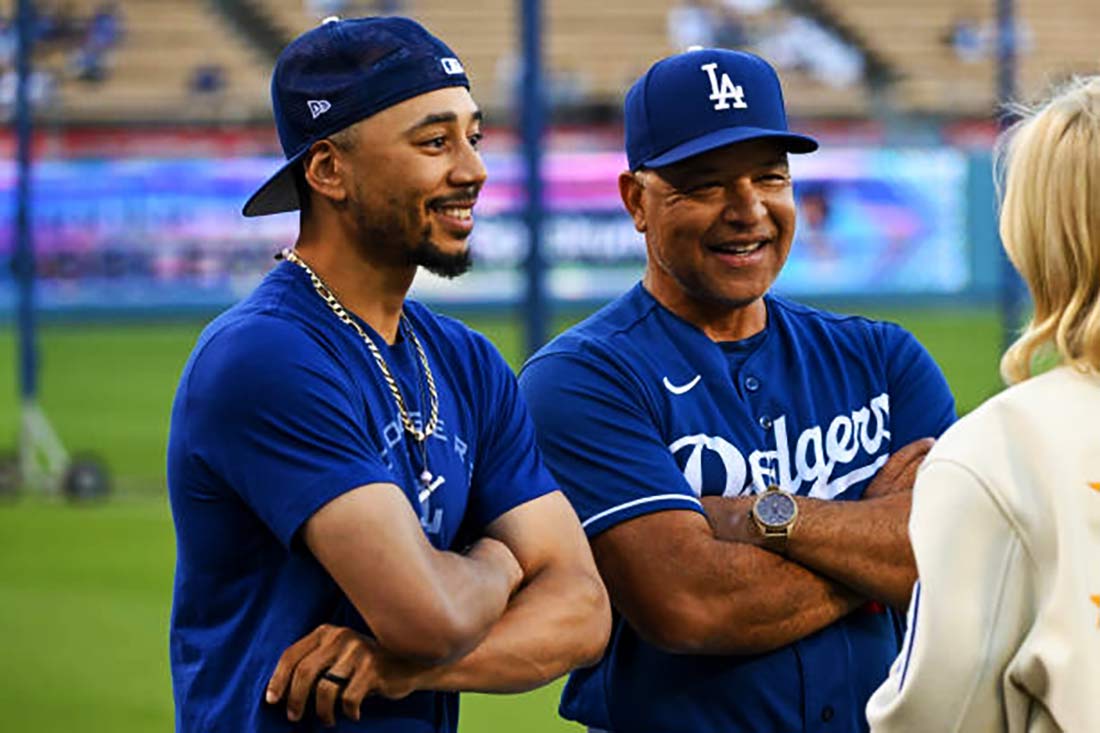 Dodgers Mookie Betts and manager Dave Roberts chat before the start of the game against the Colorado Rockies at Dodger Stadium Monday, October 3, 2022. This the last home-stand of the regular season for the Dodgers. Post season for the Dodgers will begin with game one of the NLDS on October 11th. (Photo by David Crane/MediaNews Group/Los Angeles Daily News via Getty Images)

Moreover, adding a bye to the postseason this year for the four teams across the AL and NL with the best division records (exclusive of the Mets, whom we’ve already discussed) should have interesting impacts.

We’ll see over the next week whether the bye tends to slow down these teams’ momentum going into the postseason, or whether the added rest and time for strategy seems to enhance their overall performance. (One caveat here is that I’m not a big believer in momentum in baseball in any event – it seems very ephemeral and can disappear as quickly as it appears.)

On the face of it, the Houston Astros look like the most dominant team coming out of the AL this year – not just on the basis of record and strength of pitching, but on the basis of their consistency in the second half of the season. But to the extent that gut feelings play a role here, my gut tells me to look out for the Seattle Mariners. Not only did they acquire one of the most dominant pitchers in the game at the trade deadline in Luis Castillo, they look primed to win.

Again, however – will momentum carry the Mariners through the entire postseason? That remains to be seen. If the Yankees’ pitching can stand up to the task, they may prove a very worthy opponent.

Upstart teams have won it all before. I vividly remember the 2018 NLCS between the Milwaukee Brewers and the Dodgers not because the Brewers went on to win it (they lost 4-3); but because the upstart Brewers carried that series to seven games, which no one had predicted. Yes, they were eliminated. But published predictions didn’t have them getting even that far.

And, ultimately, that’s why the teams play the games. If we could truly predict series results and even game results, and there was no element of chance nor luck – nor which pitcher happened not to have his fastball that day (and this story isn’t about Max Scherzer) – what would be the fun in even watching?

previous article
Proving His Point
next article
Lessons of October