Try as he might, Cory Mickelson has been unable to solve the entire Stokesberry riddle.

If you’re a fan of the Negro Leagues or a bobblehead collector, it’s likely you’re aware of the riddle as well. Suffice to say, though, you probably haven’t gotten any closer to solving it than Mickelson has.

So, what exactly is the Stokeberry riddle? Well, some 30 years ago, Greg Stokesberry and his son, Jon, both avid baseball fans, thought to make a bobblehead set depicting Negro Leaguers in the Hall of Fame as well as some players who they felt, at the time, also deserved that honor. The father and son team set out to make 22 bobbles but fate intervened and only 14 were made.

Mickelson, who has been researching these nodders for years, is the de facto expert on the Stokesberry set. So much so, that he is the source for pretty much everything you’ll read here or find online. According to Mickelson, he knows of only five people who have completed the original 14-piece set, which, depending on its condition, can sell for several thousand dollars.

“The set started out as the brainchild of Stokesberry in the early 90s and at the time, there were 11 Negro Leaguers in the Baseball Hall of Fame,” said Mickelson, who owns a complete set [more on that later]. “He started with these 11 and paired them with 11 others who he thought should be in the Hall of Fame. Ironically, all 22 are now in the Hall of Fame.

“He had this idea. Greg didn’t know how to make them or paint them. He used a local ceramics company to create and paint them, but he didn’t have the money. So, he turned to Thomas Flaherty, a business partner, and sometime around 1992 formed All-Star Bobbins LLC. Flaherty was the financial guy.” 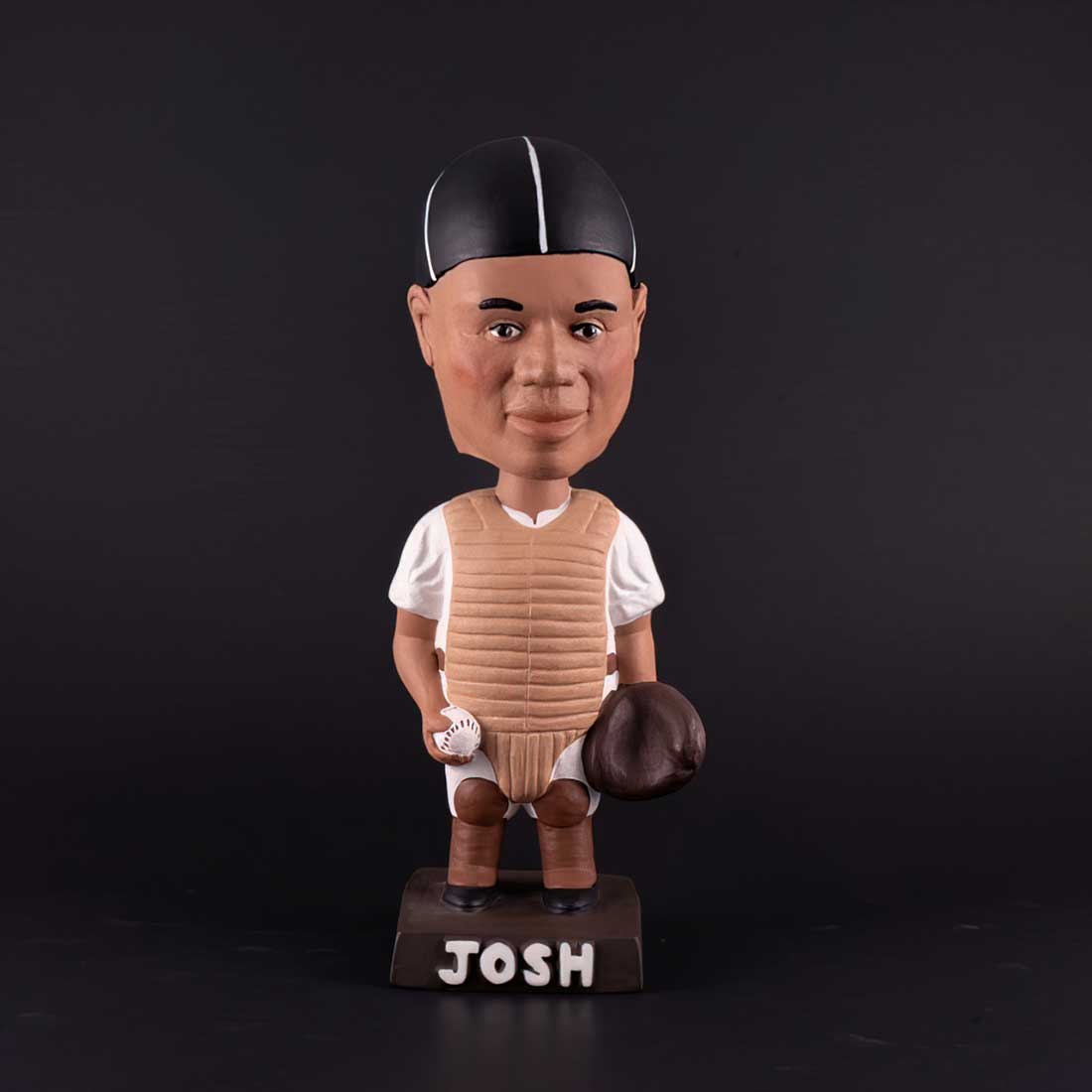 “A fair market on Stearnes is $600 to $650 just because they are not out there,” Mickelson said. “I know of three of them that exist. That’s how rare they are.”

Everything seemed to be going fine with the company and the creation of these particularly artistic nodders until Stokesberry’s son, Jon, was killed in a bicycle accident at the end of July 1994. It was at that point that Mickelson said Stokesberry’s grief took hold and he began to spiral. All production stopped and ultimately Flaherty dissolved the LLC that December. He couldn’t recoup any of the money he invested and now, three decades later, it is still a subject about which he refuses to speak.

Mickelson spoke with Flaherty’s wife earlier this year and, according to him, she said that her husband has left that all behind. He had been left with an undisclosed financial burden and had nothing to show from the venture. She added that Stokesberry attempted to produce some bobbles on his own – these have 1995 and 1996 stamps on them – but couldn’t come close to completing the original project. 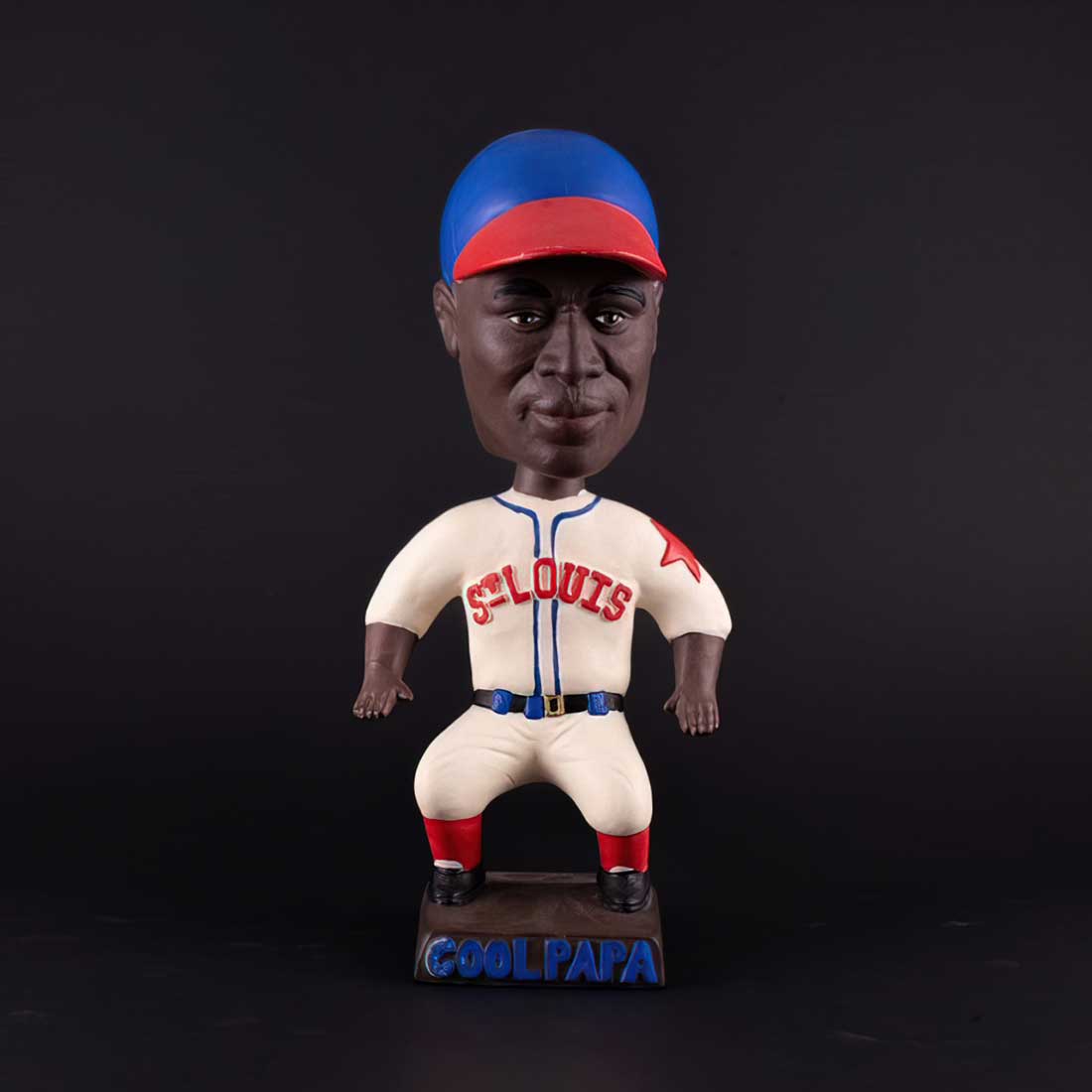 All of which makes these nodders extremely rare and very hard to find. They seldom come up on the secondary market and when they do, they can be very pricey. Even then, the harder to find ones, like Turkey Stearnes, almost never come up for sale.

“There’s just nothing out there,” Mickelson said. “I stumbled across them on eBay from someone who had a couple for sale. I would always ask if someone had Turkey Stearnes and they would say no I don’t have that one. This one guy was different, though. He said he has the whole set. I said let’s do this by phone rather than messaging back and forth through eBay and when we got to talking, I bought the whole set from him.

“He bought it from someone who bought it directly from Stokesberry and Sons. So now I had the names and a story and I was able to dive into some research from there. The Turkey Stearnes and Josh Gibson are the two hardest to find. What I would love to get a hold of is a distribution list to know how many of each were made. Paige, Leon Day and Dandridge are always available somewhere. You just don’t see the others. If I were to guess, I’d say there were less than 15 Turkey Stearnes produced. He was part of the last pair produced so I don’t think there were many of them made.”

Mickelson estimates that the “common”, or more available pieces in the set, usually run between $120 and $150. As you move deeper into the production run and the number of pieces produced drops, the prices can range from $250 to $300 apiece. 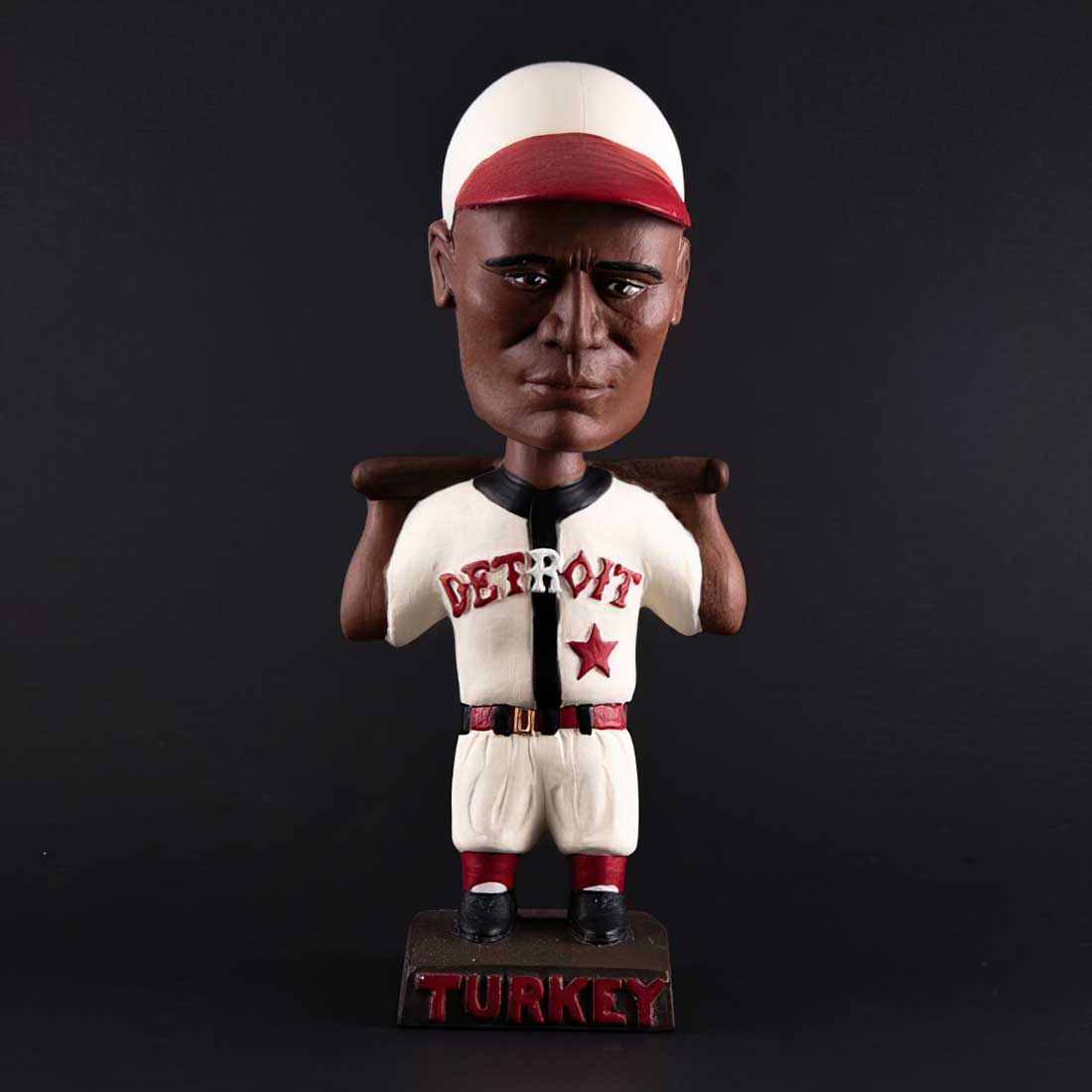 “A fair market on Stearnes is $600 to $650 just because they are not out there,” Mickelson said. “I know of three of them that exist. That’s how rare they are.”

Mickelson also points out there are Stokesberrys that have gold bases. Some of the gold-base variants have players standing on a replica of the Hall-of-Fame while others are just generic gold based pieces. The Stokesberrys painted the bases gold on those when they went around the Midwest doing trade shows in an effort to make them look shiny and eye-catching. However, they did not actually sell any with the gold bases.

Mickelson, who is an acquisition agent for Pennsylvania Power & Light LLC, knows a thing or two about collectors nodders. The Missouri native is a Kansas City Royals fan and once had a collection of more than 600 bobbles featuring them and / or Kansas-related teams. He has since sold off that part of his collection, though, and now focuses solely on collecting Negro League bobbleheads, which, other than Stokesberry, are now plentiful.

He places the inspiration for his focus on the Negro Leagues on his mother, who told him of the Kick Starter Negro Leagues Set that was being put out by The Bobblehead Hall of Fame and NegroLeaguesHistory.com almost three years ago. Mickelson looked at the set in question, thought it was “cool” and purchased it in its entirety. 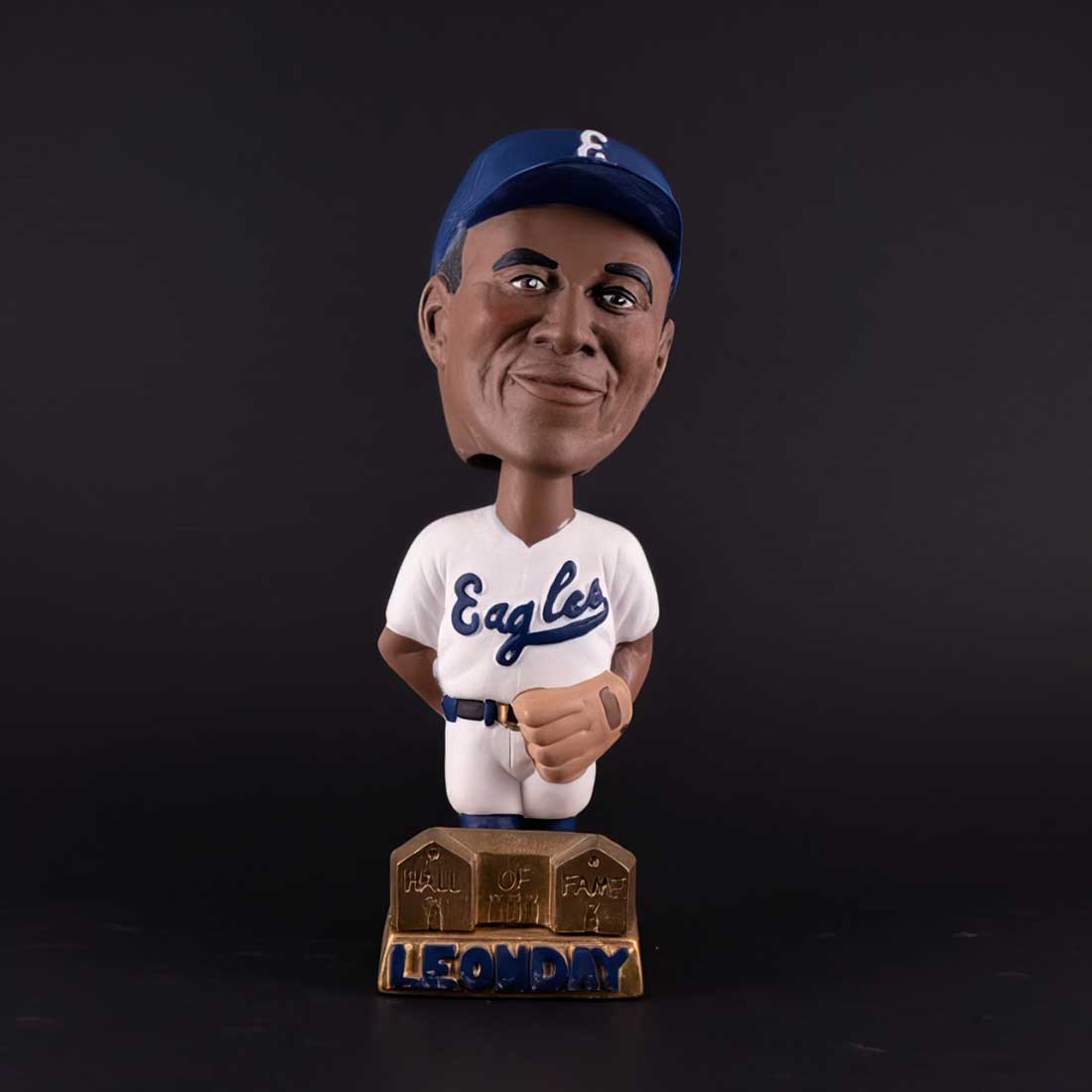 “I had heard of Satchel Paige and Josh Gibson but beyond that, I wasn’t overly familiar with the players from the Negro Leagues,” said Mickelson, who operates the negroleaguesbobbleheads.com website.

Some of the answers to this particular mystery may never be known. Greg Stokesberry died in 2020. Mickelson spoke with his daughter not long ago and after that conversation he decided to discontinue his hunt for more answers.

“She shared a lot with me about her dad,” he said. “Everything she shared, she asked me to keep private. All I can say is that the bobbleheads were a cause of a lot of grief and anger between her father and a lot of people. So, at this point, I am going to discontinue pursuing any more information. What I have is enough.”

Mickelson fulfills his desire to add to his Negro Leagues collection – by the way he has an incredible Negro League Sugar Skull collection – by searching for stadium giveaways, purchasing the latest Negro Leagues installments issued by the Bobblehead Hall of Fame and through the Vancouver-based artist Matt Hirsch, who goes by the name The Catman.

“The Catman and I have worked on a series,” Mickelson said. “He has done a Satchel Paige with the Indianapolis Clowns, the Kansas City Monarchs, which is a remake of his original Satchel, and one from the Chattanooga Lookouts, Satchel’s first pro team. He’s only making five of each of those. He also did a Hank Aaron in his Clowns uniform and a Cool Papa Bell.”

These will have to suffice for Mickelson now that the Stokesberry riddle has been laid to rest. 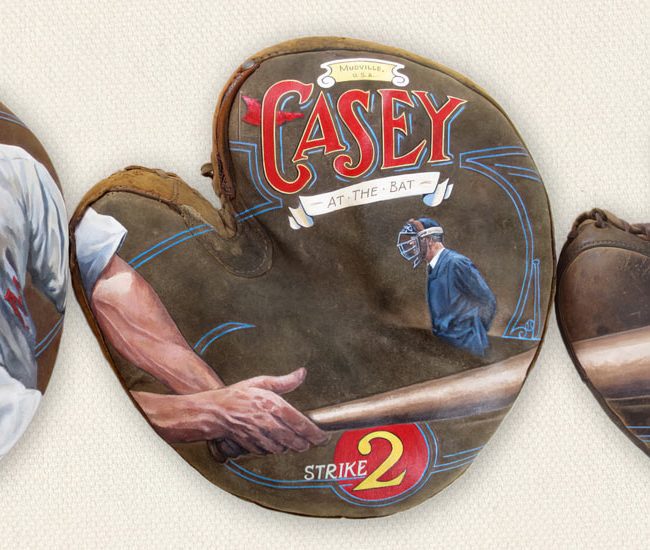 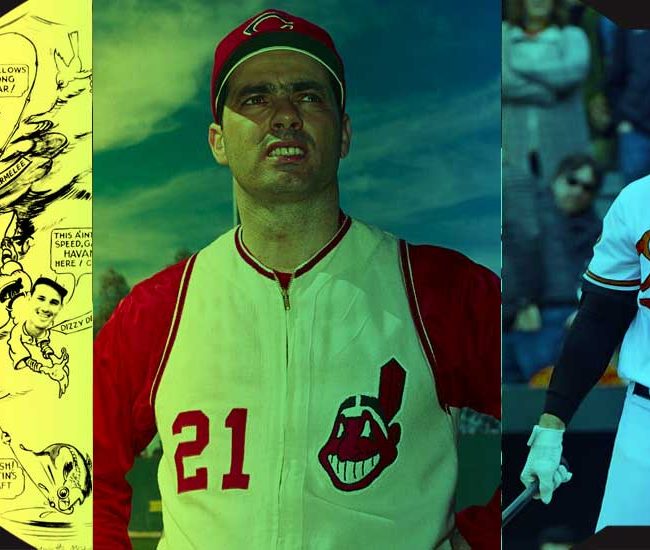