Here’s the essential problem with Yankees GM Brian Cashman and manager Aaron Boone, and it again revealed itself in what was labeled an “end of the season” press conference on Friday:

They speak in code. They have little to no self-awareness.

It adds up to what I call Gobble Speak.

Some of the gobbles were much longer than that.

Here is what is most disappointing of all, though.

It never used to be this way but it gets worse every season as the Yankees continue to fail in a variety of ways. Whether it’s a one-game wildcard wipeout in 2021 or a four-game sweep by the mighty Astros, it’s an embarrassing end to the season.

But the process is great, according to Cashman and Boone.

In their minds, every year the Yankees win the coveted “Process World Series.’’

The way they tell it, these Yankees were not put together poorly and there weren’t critical managerial blunders along the way; no, the Yankees just had a series of injuries at the wrong time of year.

That seems to be a problem in itself if Cashman and Boone were honest with the fans and themselves.

At no point was there even a hint of, “You know we’ve had Aaron Judge all these years, we would have been better off signing him to a long-term deal three years ago, so there would be no doubt he will remain a Yankee for life.’’

At no point was there a revelation that “Hit Strikes Hard’’ may sound good in a convention of hitting gurus, but it doesn’t really work in the MLB  postseason. You need contact and you need home runs.

There was no urgency to get things right.

Cashman did admit he traded for Andrew Benintendi to acquire more contact hitting, but Benintendi got hurt. So that one injury to an added piece at the trade deadline destroyed the entire hitting “balance’’ of the team.

Not a great process there, Brian.

As far as I can tell, Cashman’s essential message was “If not for injuries, we would have won the ALCS.’’

I will not bore you with a repeat of the press conference. I will quote some points; and let me offer one example of the failures of this organization, from this Cashman quote: “I thought we addressed a lot of problems to manifest ourselves from a wild-card, one-game knockout in Fenway Park the year before to being in the postseason all the way to the ALCS; but unfortunately being swept by the Astros, a team that obviously has wreaked havoc on us the last number of years, with different teams on their end and different teams on our end. So it’s certainly frustrating.”

When they start tossing around sentences like “I thought we addressed a lot of problems to manifest ourselves from a wild-card, one-game knockout …’’ it’s time to call BS.

Aaron Boone and Brian Cashman met with the media earlier and discussed the Yankees 2022 season.

What does that even mean? I’ve spoken to countless GMs through the decades and I’ve never heard anything like that kind of talk.

When they start tossing around sentences like “I thought we addressed a lot of problems to manifest ourselves from a wild-card, one-game knockout …’’ it’s time to call BS.

Who talks like that? Now the Nerds may talk like that to each other in the Yankee offices, I get it; but leave it there.

That is word salad more in tune with a politician than a GM.

So are sentences like this when Cashman was asked about evaluating the analytics department, saying the goal is “to find the higher ground collectively.’’

Silly me, I didn’t know running a baseball team was about finding the higher ground collectively, I thought it was about winning.

I didn’t know it was all about finding the higher ground collectively.

Can you imagine Cashman in conversation with players and using the expression “a lot of problems to manifest ourselves’’ in a real discussion? Or we must “find the higher ground collectively?’’

Imagine telling that to Paul O’Neill or Derek Jeter.

Trust me, there was a reason that for many, many decades GMs avoided going into the clubhouse. Maybe they should be less seen and less heard today.

Imagine telling those dirt dogs to “manifest ourselves’’ or “find the higher ground collectively.’’

After watching that press conference I now fully understand why the Yankees’ “mental skills’’ coach recommended watching the Yankees lowest moment as an organization, the 2004 ALCS, when they couldn’t “find the higher ground collectively’’ after winning the first three games against the Red Sox and then losing four straight as the Red Sox not only found the higher ground collectively, they broke the Curse of the Bambino. Now I fully understand why Cashman and Boone signed off on such a tactic – with the mindset they showed on Friday. 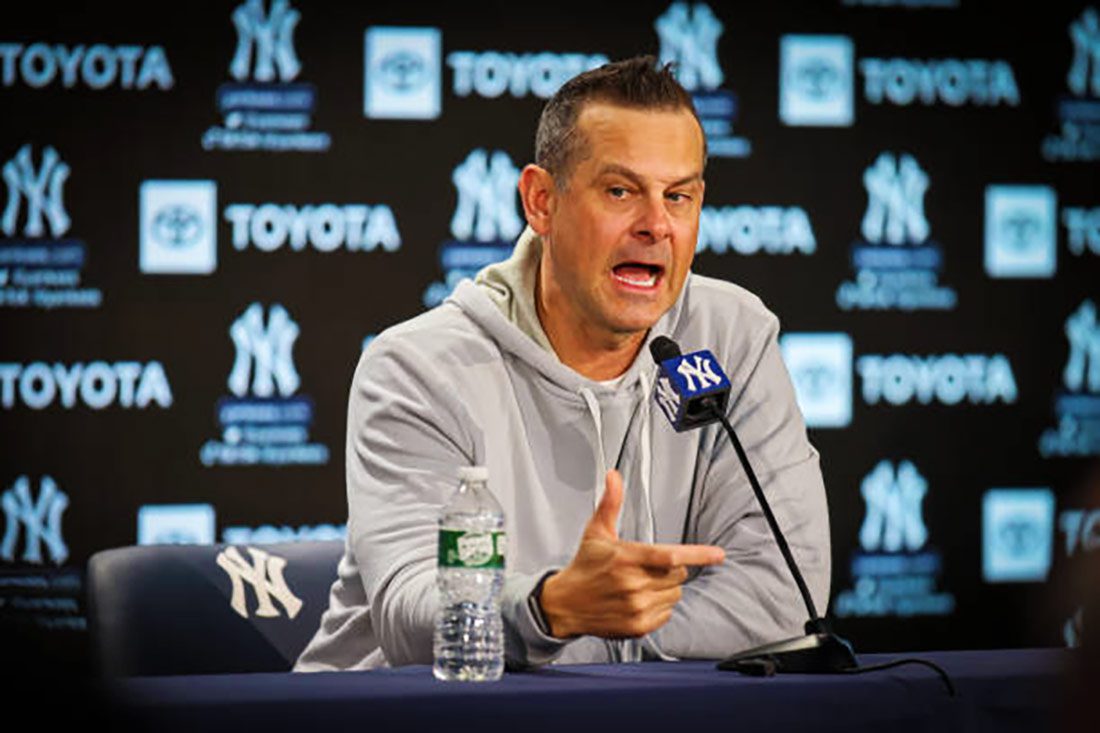 If any such conversation were to have taken place with the Joe Torre Yankees the player would immediately have had the trainer come over and get him out of there just to get out of the conversation.

Imagine telling Thurman Munson and Goose Gossage to “manifest ourselves’’ or “find the higher ground collectively.’’

Cashman is not in touch with the Yankees’ real problems. You know, like staying healthy, making contact, playing good defense, offering up a variety of ways to score runs, and so on and so on.

One World Series championship in the last 22 seasons and that came in 2009 when George Steinbrenner was around to spend the big Stein-bucks; and there were baseball people like Stick Michael around, too.

Cashman also had high praise for his pitching coach Matt Blake because he has such great rapport with the pitchers. Well, with so many pitchers going down to injury, especially out of the bullpen, he better have a great rapport with pitchers because he is getting to meet a lot of them as they search for that higher ground collectively.

Meanwhile, why is Cole yanked in a critical moment in Game 3? Shouldn’t his whole season have been built up to that point to accept that challenge and use that moment to succeed?

Instead the critical juncture of the season came with a reliever on the mound, Lou Trivino, who was acquired at the trade deadline and posted a 6.47 ERA with the A’s.

And, of course, we had to hear over and over again that “Boonie did a great job.’’

Really, in whose world?

They were two games under .500 from July 9 to the end of the season. In the playoffs they were lucky to get past the Guardians in five games in the ALDS, and should be thankful the Guardians decided (for some reason) to start Aaron Civale (4.92 ERA in the regular season) instead of Shane Bieber in the win or go home Game 5 at Yankee Stadium. 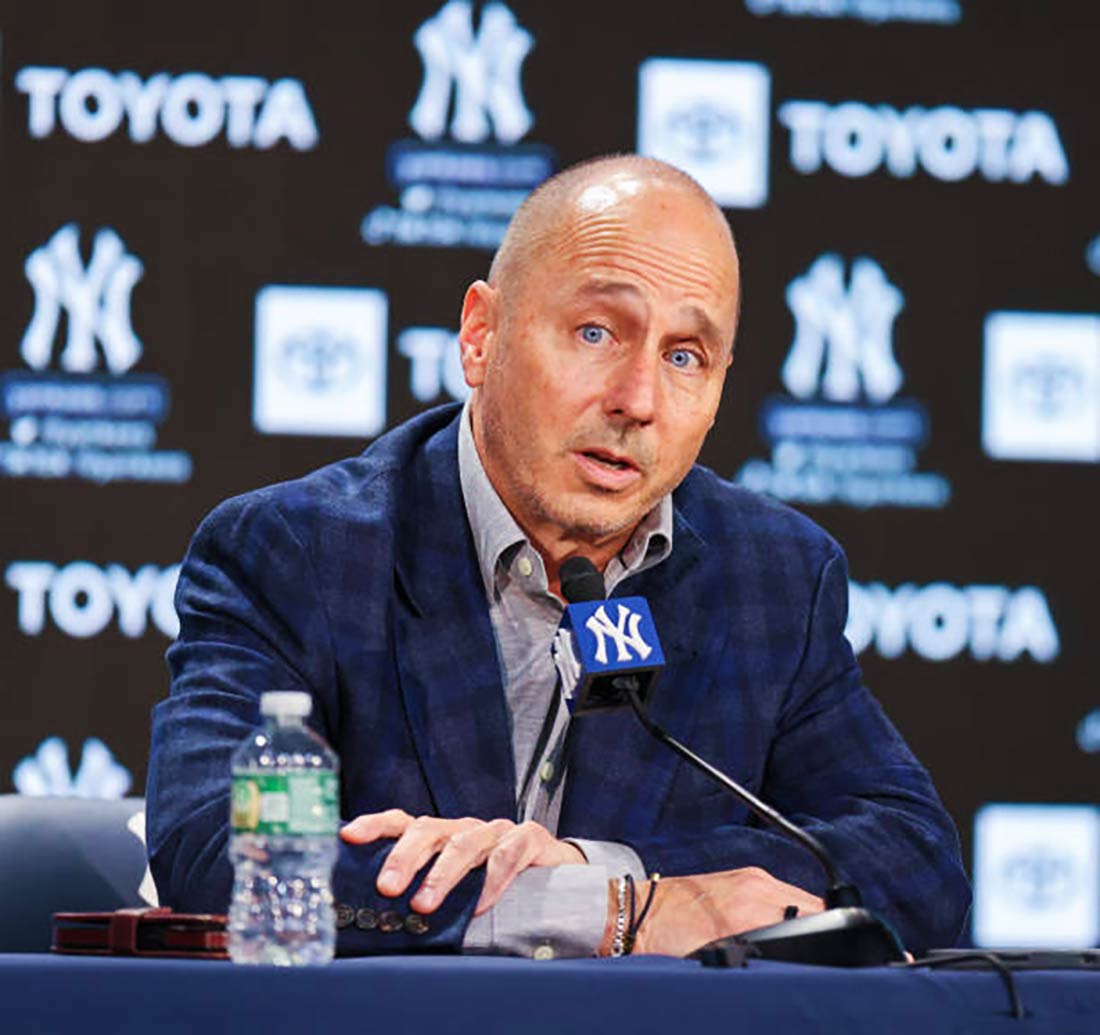 That marked the Yankees last victory of 2022. They lost four straight to the Astros, making their postseason record 3-6, so from July 9 until their last game of 2022 the Yankees were 41-46.

But Boonie did a great job and the process was great too.

The results? Not so much.

Collectively they could not find the higher ground. This coming off a season when they were bounced in the one-game wild card.

Again, all this coming in a season Aaron Judge hit 62 home runs.

By the way, you can say this is just bad luck having to match up with the Astros but the Astros have rebuilt their team and were not afraid to turn shortstop over to young Jeremy Pena.

I think the Yankees might have had their hands full too if they faced off against the Mariners in the ALCS. During the regular season the Yankees were 2-5 against the Astros and 2-4 against the up and coming Mariners, who were dealt a couple hard lessons by the wily Astros – like don’t bring in a starter as a reliever in the most critical juncture of Game 1 and don’t always swing for the fences in 18-inning games.

The Mariners should learn from this postseason.

After watching the Cashman/Boone press conference I don’t know if the Yankees have learned much. New rules are coming too, so that will be an adjustment. Cashman referred to it as “the New World Order;’’ a term I would not use. But again, I wouldn’t use “manifest’’ or “finding the collective higher ground.’’

We were not told that Josh Donaldson was a terrible fit. Nor that Isiah Kiner-Falefa lost his confidence and his ability to defend at shortstop. That’s two straight seasons Cashman has flubbed at shortstop; last year it was Gleyber Torres, this year IKF. Frankie Montas was a trade deadline bust even though everyone in the world saw his road ERA with the A’s and it ended up at 5.60 for the season. Luis Castillo would have been the better addition and so much more; even little things like yes, it would have been nice if the Yankees had not lost young pitchers Garrett Whitlock to the Red Sox and Trevor Stephan to Cleveland both on the same day, December 10, 2020, in the Rule 5 draft.

It was a mistake too to rely on analytics to tell us that Matt Carpenter was ready to return even though he clearly was not ready to face Houston pitching.

Instead we were told this.

“The bottom line is we’re a really good team,” Aaron Boone said. “We’ve been knocking on that door now for a long time. We haven’t punched through. I certainly understand the frustration of that with everyone. We all feel that as much as everyone. That’s why I came back to do this. I want to hoist that trophy with these guys. The reality is we are close. We have a team that is realistically in the conversation. We were missing some key people at a key time of the year.’’

And we were told this by Boone: “We got to find a way to keep getting a little better.”

Once again it was as if the Astros snuck up on the Yankees.

“We haven’t been able to beat them,’’ Boone said, stating the obvious once again. Then he borrowed a line from the Padres that they used in their conquest of the Dodgers. “I said we needed to slay that dragon. We haven’t done it yet. That hurts, and it’s also a motivating factor to try and continue to get better.”

It also helped that the rather small market Padres (geez, San Diego doesn’t even have an NFL team while the New York area has two) went out and signed free agent Manny Machado, just like the Phillies signed Bryce Harper.

That’s a process that works, signing great players when they become free agents.

The final word will go to Hall of Fame pitcher Sandy Koufax, a gentleman with whom I always loved talking real baseball and who once said this, so perfectly, about baseball: “The game has a cleanness. If you do a good job, the numbers say so. You don’t have to ask anyone or play politics. You don’t have to wait for the reviews.’’