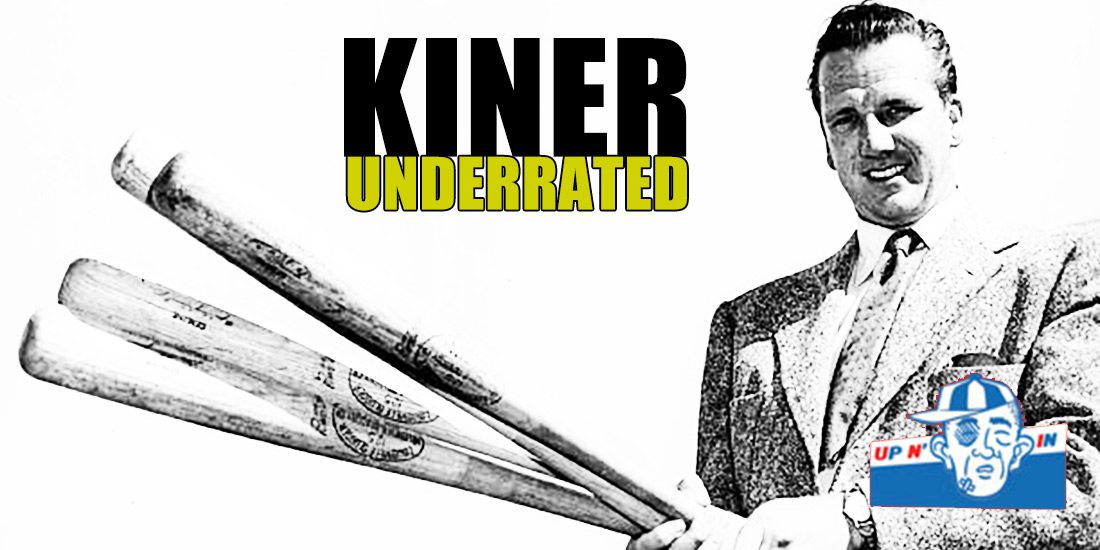 If you look at who the home run leaders were for the Pittsburgh Pirates over the years, Willie Stargell leads the group by far, with 475. I doubt many are surprised by this, as Stargell was — and is still — considered among the elite of baseball, and a star amongst stars.

But the player who comes in second most likely doesn’t have the same star status in most people’s minds that does Stargell. And yet, his name is fairly well recognized among baseball fans, and especially among Pirates and Mets fans. Ralph Kiner hit 301 home runs for the Buccos, back in the late 40s and early 50s, way back before power hitting was the trend it is today.

So when you discover that Roberto Clemente had 240 home runs for the Pirates, Andrew McCutchen 203, Barry Bonds 176, Dave Parker 166, and Brian Giles, Frank Thomas, Jason Bay, and Bill Mazeroski all between 138 and 165 – it might seem a little surprising that it’s Kiner who came in second behind Stargell – and not one of the others on this pretty impressive list.

Kiner had a career truncated by injury; but from 1946-1953, during his Pirates years, he batted .280 and hit 301 home runs. For his career, he hit 369 home runs and that included his three years with the Chicago Cubs and the Cleveland Indians (now Cleveland Guardians). Kiner was an All-Star six times during his career, every year from 1948-1953. He was also in the top 30 in the NL MVP vote seven times in his career, from 1946-1952.

After his rookie season, Kiner’s strikeout totals ranged in the 60s, 70s, and 80s per year for the most part; and given his typical 150-160 games played per season, that stat is incredibly low compared to what we usually see from power hitters these days. That’s somewhere between 60 to 90 strikeouts in roughly 650 plate appearances per year. 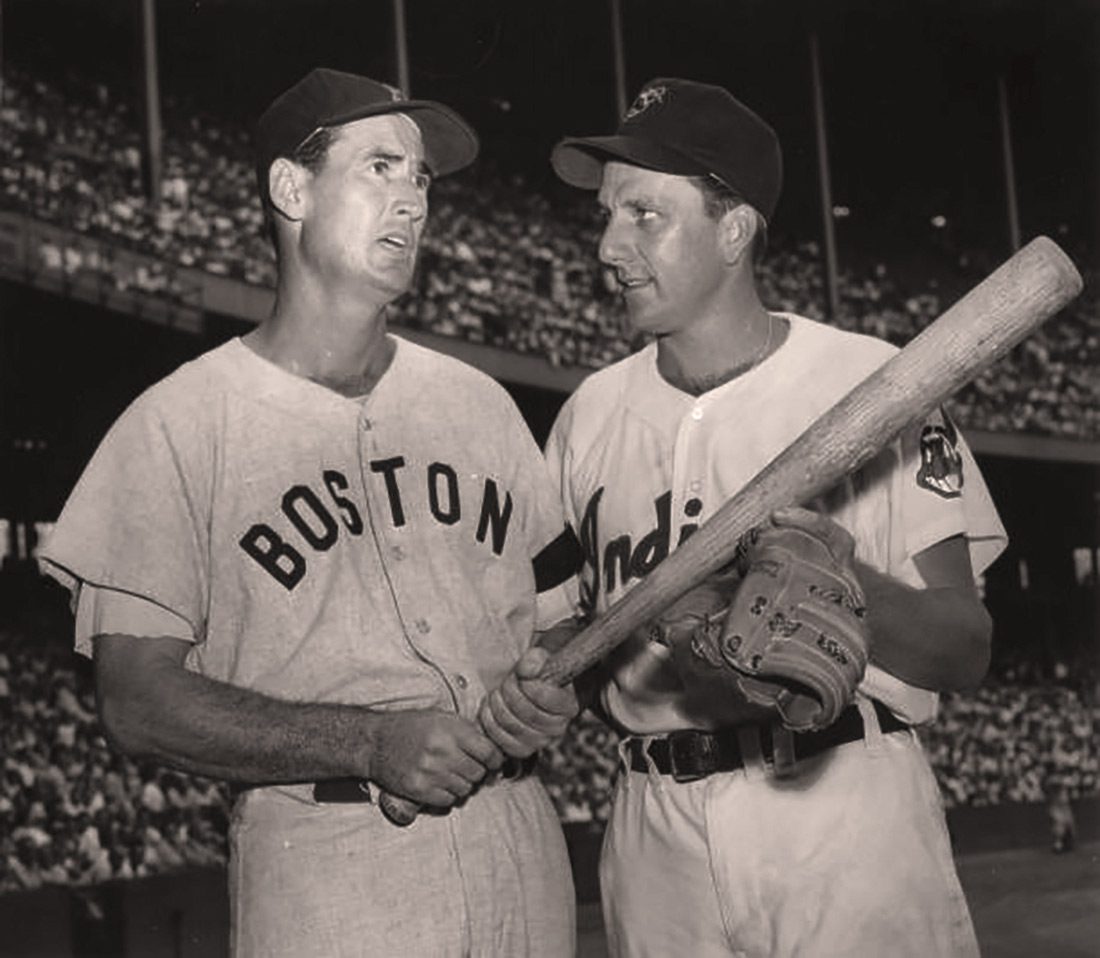 CLEVELAND - 1955: Ted Williams of the Boston Red Sox and Ralph Kiner of the Cleveland Indians pose together prior to a 1955 season game at Municipal Stadium in Cleveland, Ohio. (Photo by Ron Kuntz Collection/Diamond Images/Getty Images)

For a baseline comparison, in the 2022 season, AL MVP Aaron Judge of the New York Yankees, who broke the long-standing AL home run record held by Roger Maris, hit 62 home runs in 696 plate appearances; but he also struck out 175 times. Kiner definitely played in a different baseball era.

One little known fact about Kiner is that he received hours of baseball instruction from Hank Greenberg, who had planned to retire in 1946 – but the Pirates organization convinced him not to. In 1947, in his sophomore season, Kiner led the major leagues with 51 home runs while striking out only 81 times in 666 plate appearances. That year Kiner came in sixth in the NL MVP vote, and he carried an OPS of 1.055.

Not coincidentally, those three years were Kiner’s best slugging percentage years, as well. In 1949, Kiner came in fourth in the MVP vote, which is the closest he ever came to actually being voted the NL MVP. Although the Buccos never made it to the playoffs during Kiner’s playing years for them, his contributions to the team were a significant part of what they did achieve. 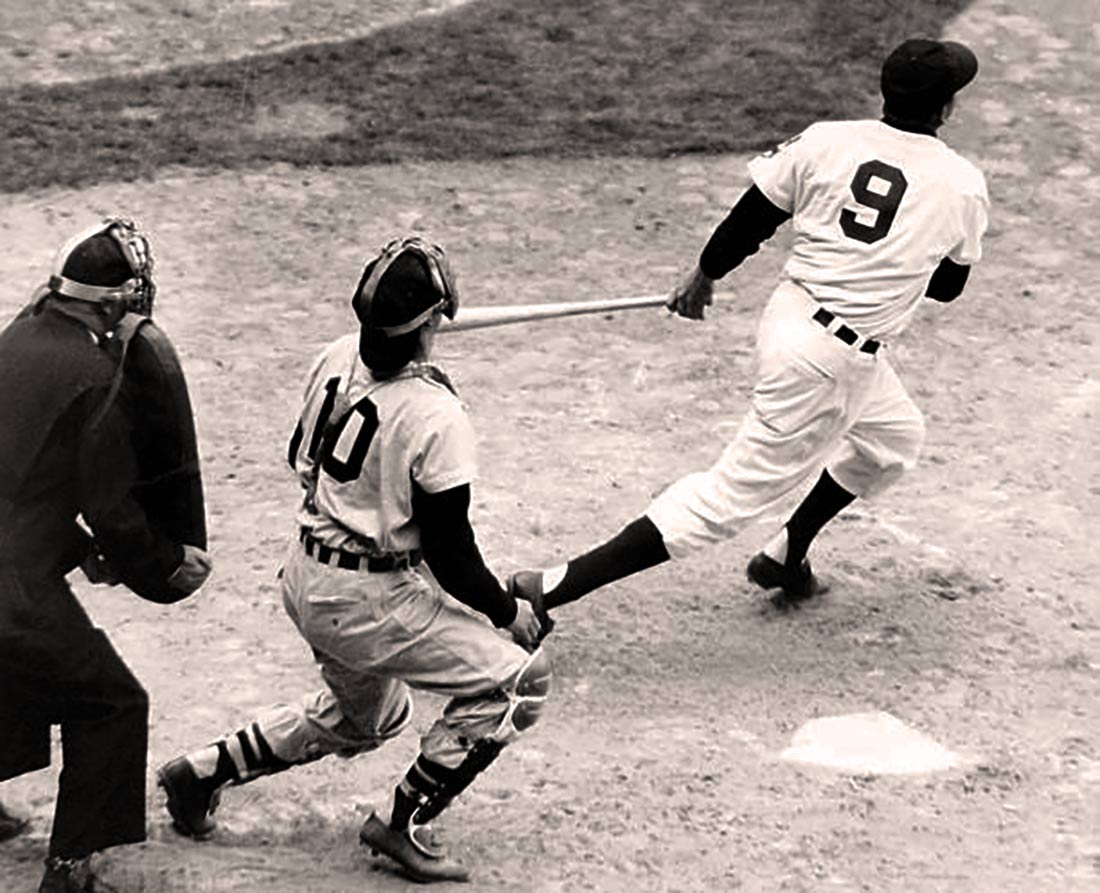 CLEVELAND, OH - APRIL 12: Ralph Kiner #9 of the Cleveland Indians hits his first home run of the season as catcher Sherm Lollar #10 of the Chicago White Sox looks on during their game on April 12, 1955 at Cleveland Municipal Stadium in Cleveland, Ohio. (Photo by B Bennett/Getty Images)

Kiner was part of a group trade to the Chicago Cubs on June 4, 1953; and as he told it, there was a salary dispute with Branch Rickey involved in why he was one of the players who were part of the trade. He had led the NL in home runs for the seventh straight season in 1952, but Rickey decided to cut his salary. When Kiner protested the cut, Rickey reminded him the team had finished in last place. “We can finish last without you,” Rickey apparently said.

But Kiner’s playing days were numbered anyway, as a back injury forced him to retire at the age of 32, after only 10 seasons with three different teams.

And yet Kiner had a whole second chapter as a baseball broadcaster – and he went on to have a very long broadcasting career for the New York Mets. For many years he was known as one of the voices of the Mets.

He also hosted a post-game show for the Mets called “Kiner’s Corner.” The show was on the air for more than two decades. The best player of the game would join him and break down highlights of the contest.

The original Mets broadcast team of Kiner, Bob Murphy, and Lindsey Nelson was together for nearly 20 seasons doing both television and radio. One of the greatest strengths of having Kiner announce games was that he made the history of the sport come alive.

Because he had been a celebrity during his playing days, he famously had dated many movie stars, including Elizabeth Taylor. Hence, he could just as easily share great stories about classic Hollywood as he did about baseball. 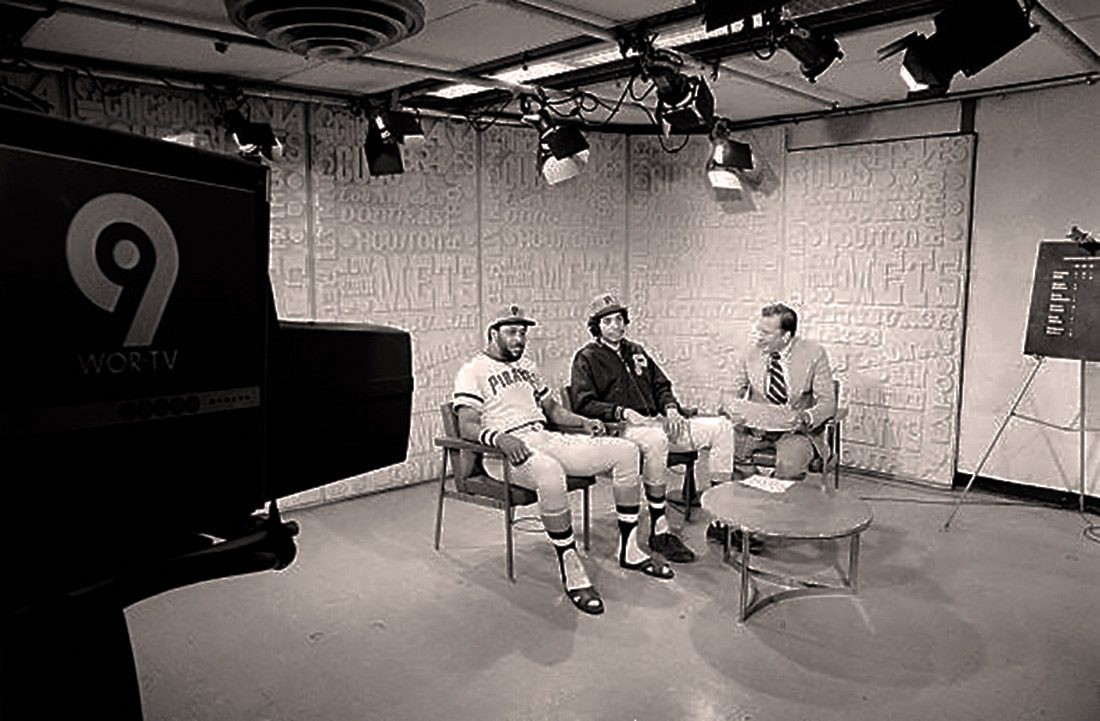 Kiner was there in 1969 when the Mets shocked the world and won their first World Series. He was there in 1973 when the Mets pushed the Oakland A’s to seven games in the Fall Classic despite winning only 82 games during the regular season. Kiner was also on the scene in 1986 when a young Mets team overpowered all comers to win a second World championship.

As a broadcaster, Kiner was known for making statements you might have thought came from Yogi Berra. Here are some Kiner gems:

“Solo home runs usually come with no one on base.”

“All of his saves have come in relief appearances.”

“If Casey Stengel were alive today, he’d be spinning in his grave.”

“All of the Mets’ road wins against Los Angeles this year have been at Dodger Stadium.”

“(Don) Sutton lost thirteen games in a row without winning a ballgame.” 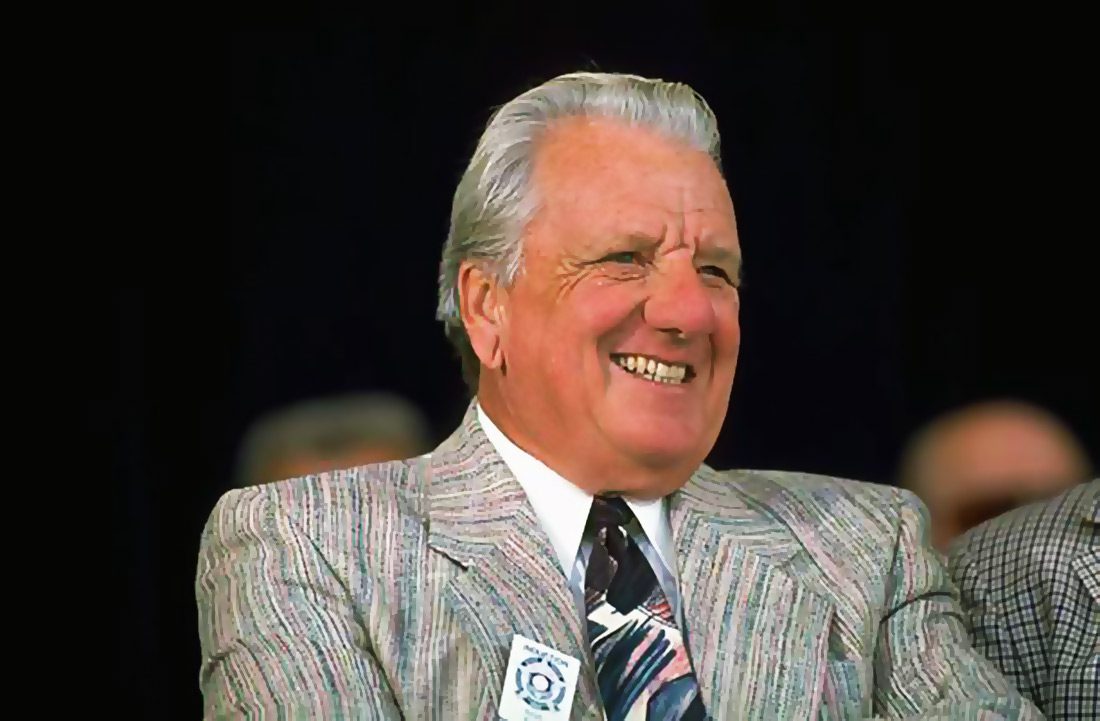 Kiner was also famous for making little mistakes during his broadcasts. He often referred to “Hubie Wilson” or “Mookie Brooks” in the early ’80s, combining the names of the Mets third baseman and center fielder. He once asked viewers to stay tuned for “Korner’s Kiner.” But these errors just became part of the Kiner mystique, and viewers and listeners found him all the more lovable for them.

I personally recall from Kiner’s 1990’s broadcasting days that he had trouble pronouncing middle infielder Mark Grudzeilanek’s last name. It was kind of lucky that Grudzeilanek never ended up playing for the Mets, as Kiner would have had to struggle with his name on an almost daily basis. But all of his little mispronunications just made the games even more entertaining.

Kiner won an Emmy for his broadcasting work; and during his final season in 2013, he was the oldest active announcer in Major League Baseball. He was a beloved figure amongst Mets fans – and though his playing career didn’t last longer than 1955, he will forever be remembered as one of the most significant Pirates ever to play the game, and one of the most well-recognized baseball broadcasters for half a century.

previous article
Why not Vada?
next article
Un-Cancel Pete Rose 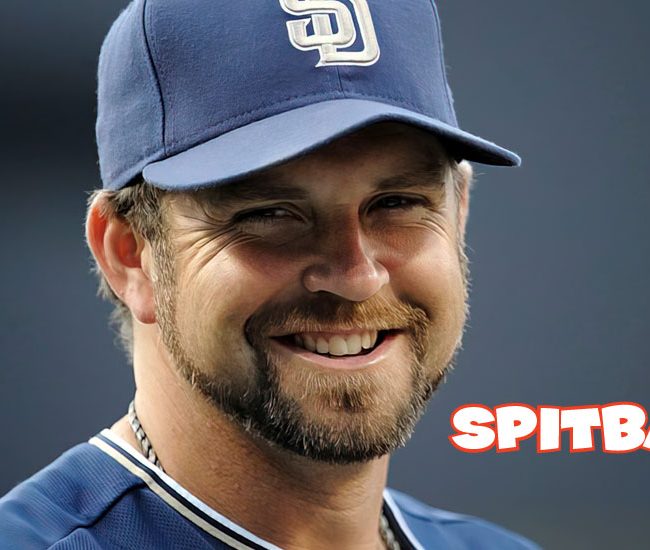