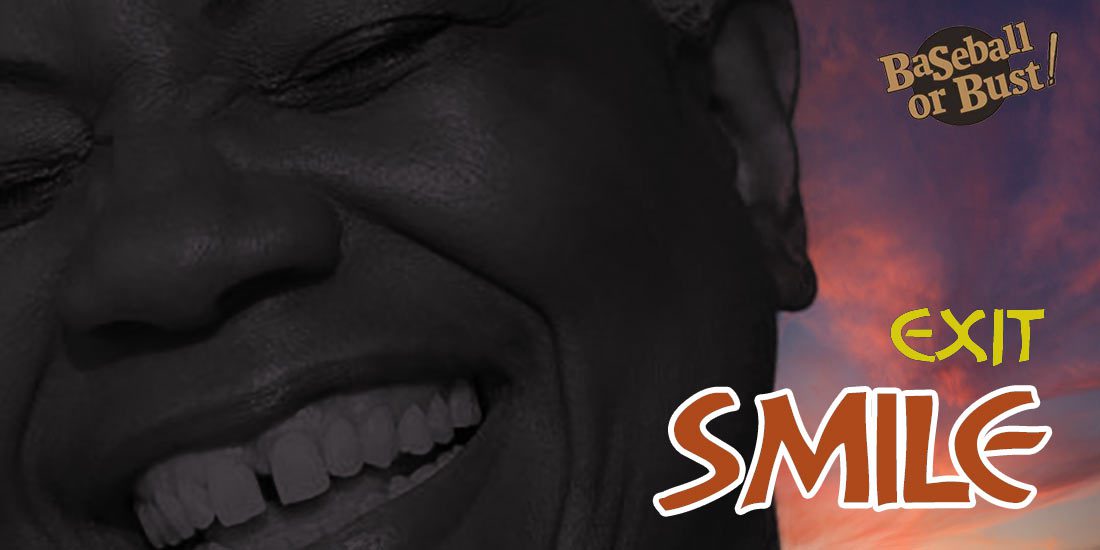 Remember when sports were nothing but fun?

Win or lose, it was fun to watch your team, and for Dion Rich, who passed away recently at the age of 92 in San Diego, no one ever had more fun at sporting events.

In fact, the last event Dion attended was a Padres playoff game this last October.

From the World Series to the Olympics to Super Bowls to the Academy Awards, Dion Rich always found a way to sneak into the event and not get caught.

He learned a long time ago, it’s even more fun when you are not paying for it.

And Dion’s first rule of gate-crashing is something I never will never forget.

Once you crash an event, make sure the first thing you do is eat,’’ Dion told me sincerely decades ago. “Because when you get thrown out, it feels a lot better on a full stomach.”

There was something innocent about Rich even though he was not doing an innocent act. Rich also had a rule. If caught, don’t cause trouble, just get the hell out of there.

Lunch was a big part of Dion’s world. He would host luncheons in San Diego and that’s when I really got to know him. There was always an interesting group of people at Dion’s lunches held in different spots around town because Dion loved to bring people together for a good time and that included newspaper people like Nick Canepa and Diane Bell.

Like everything else in his life, Dion Rich set up these lunches through a bartering system. A ticket-broker by trade, he was a barterer at heart.

I spoke to his good friend Bill Swank – a retired probation officer and also an expert on Pacific Coast League Baseball – on Wednesday. Swank authored Dion’s second book. “The Life of Dion Rich. How to Live Like a Millionaire with No Money Down.’’

That about says it all.

You could see that the title was extremely important to Dion Rich.

Dion started as a bar owner and forever was that bartender who never forgot a name and remembered your favorite drink.

Though he baffled security experts around the world, especially in the NFL, yeah that’s Dion carrying off Tom Landry after Super Bowl XII at the Superdome, Dion Rich gate-crashed as a hobby. There wasn’t a mean bone in his body and he did many charity works too, including quietly host whale watching trips or fishing trips for children or outings to the ballpark, especially for the children of military members or handicapped children.

The man had fun and those around him had fun too.

Along the way, Dion Rich practically invented the sports selfie.

He had pictures taken with just about any sports star you can imagine. He documented his success. Dion Rich had the receipts. And they usually included his big smile.

Bill Swank is no-nonsense and does not suffer fools. Probation officers have a tendency to be realists. But he also has a soft spot for people, seeing the good in everyone and even now at the age of 82, still dresses up as Santa Claus for special events in San Diego, including the Ocean Beach Holiday Parade that has a marching kazoo band and will take place this Saturday.

Swank actually has his own baseball card where he is dressed up as Santa Claus.

“Dion was one of a kind,’’ Swank told Baseball or Bust. “He would love to go to the World Series and All-Star Games and all the Super Bowls. He was a character. He sure did it his way.’’ 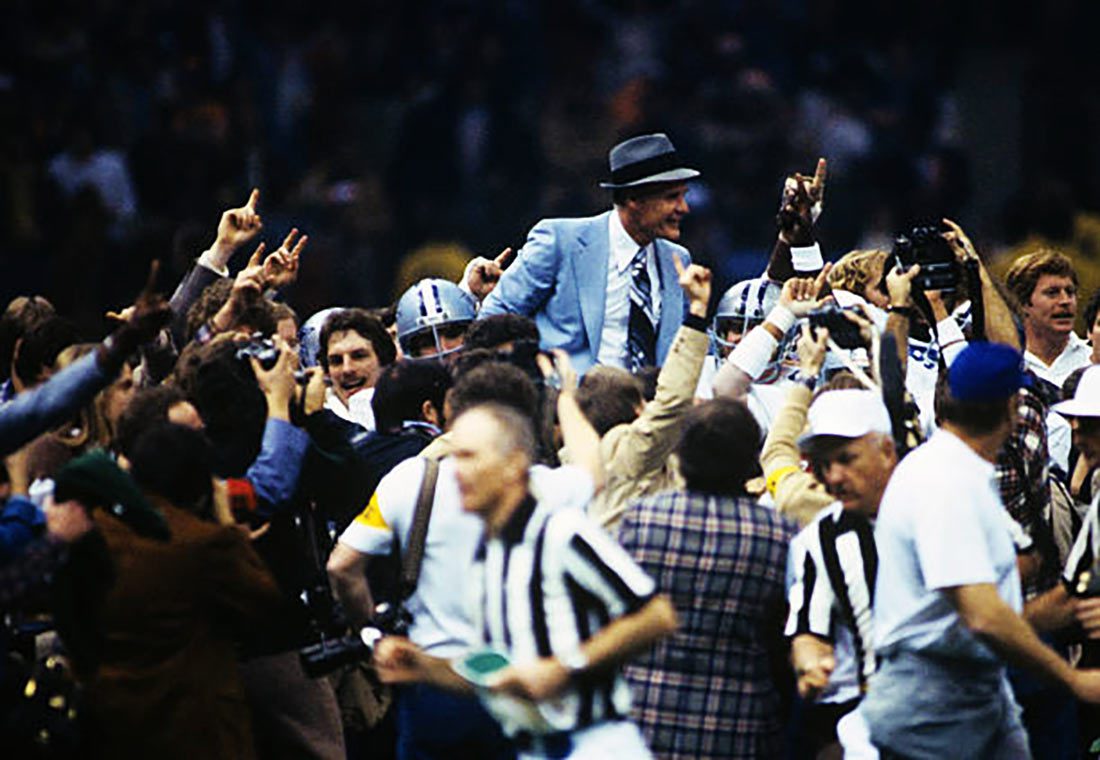 Layers of greatness in this picture as the great Coach Landry is carried off the field after Super Bowl XII. Bonus points if you can spot Dion Rich. (Photo by Neil Leifer /Sports Illustrated via Getty Images)

Here is what those letters stood for: “F—ing Ticket Scalper and King of Barter,’’ Swank recalled with a hearty laugh Santa would be proud of.

That may be the most honest business card ever produced.

When the Chargers left town, Rich gave up his tickets and that pretty much was the end of his ticket scalping days.

“I met so many good people at his lunches,’’ Swank said of Rich’s lunches. “He would call me and tell me these little vignettes and it took eight years for the second book to come out. The stories would never stop. He loved that book and he loved that picture of carrying Tom Landry off the field.’’

One of just several coaches he helped carry off.

My favorite picture though is the one at the first Super Bowl, before it was known as the Super Bowl. There is Dion standing right behind Vince Lombardi as Pete Rozelle is presenting Lombardi with the game-winning trophy.

That one picture says so much about what sports and in particular the NFL once was and what it has become. It’s a much simpler time back on January 15, 1967 at the Los Angeles Memorial Coliseum.

Dion would have turned 93 on November 20th. He knew the end was near so he had arranged for a party and set aside money for the event – after his death, a Kick the Bucket Party. The party is set for February.

I asked Swank what is the legacy of Dion Rich?

“He was all about having fun, having a good time,’’ Swank said. “Some people think what he did was wrong but for him it was the adventure of it all. He just loved sneaking in, he loved out-witting the security. It was a big game for him. And he was a generous guy. He loved to bring people together and get a little bit of publicity out of it along the way.’’

During Rich’s era sports were fun. Sure there were arguments about different teams and players, especially in bars, but it was all good natured at heart.

“That’s exactly it and Nick and Rick Reilly understood that too as you do, Dion just had fun,’’ Swank said. “The hundreds of comments on the bottom of the (recent) articles show you the impact Dion had on the public. People could relate.’’ 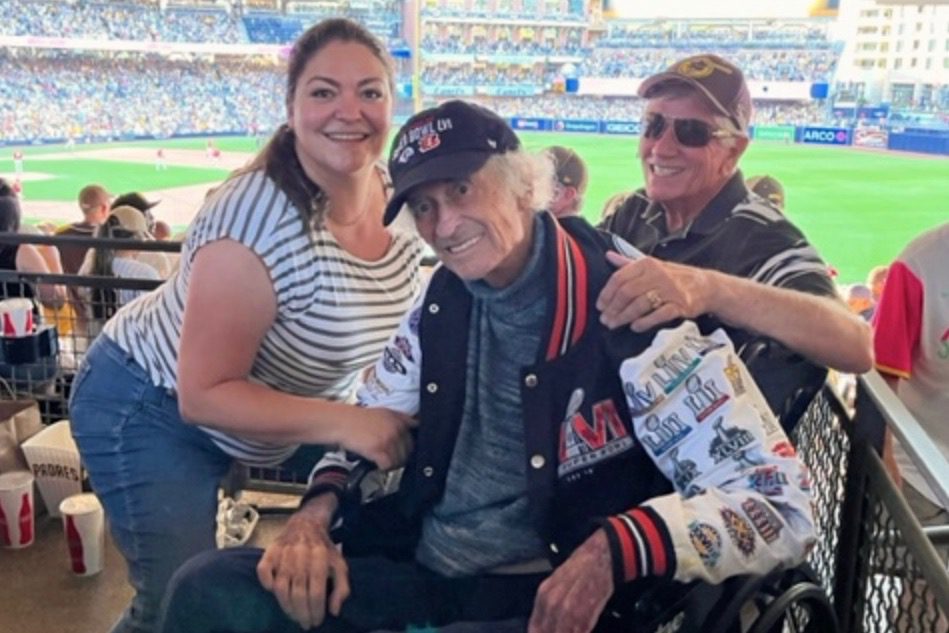 People could relate to an Everyman sneaking into the Super Bowl or the World Series or a championship series or the Academy Awards or  the Kentucky Derby, that hit a nerve with people. There is a picture of Dion holding the National League trophy in 1997 with Marlins owner Wayne Huizinga.

To get the picture, Rich had to first find out Huizinga’s first name, and then happily asked, “Hey Wayne, can I get a shot with you and the trophy.’’

Huizenga’s reaction was immediate: “Sure, let’s hold it.’’

There can be problems too. In 1983 at the World Series Dion Rich was sprayed with champagne by Baltimore’s Eddie Murray and was not happy with the cleaning bill.

There was something innocent about Rich even though he was not doing an innocent act. Rich also had a rule. If caught, don’t cause trouble, just get the hell out of there.

He once said of all the events he crashed, “They are all small potatoes compared to the Super Bowl. That’s the Big One. That’s The Challenge.’’

Dion Rich was always up for a challenge.

Then there is this.

“Dion always wanted to have a story of his life, a movie,’’ Swank revealed. “I can’t tell you all the times we talked to potential producers. It never worked out. People are always saying, ‘A movie should be made about this guy.’ ’’

If one were, and if that movie were up for an Academy Award, a Dion Rich protégé would have to sneak into the showcase event.

“He just wanted people to like him, he wanted to be liked,’’ Swank said with passion in his voice. “He was a bartender, and when he was a bartender he made a point of learning people’s first names and knowing what they drank. I couldn’t afford to go to his bar when I was in college. He had Dion’s Bar of Music and it started out to be a high class nightclub. In the 60s he had to change with the times and turned it into a Go-Go joint.’’ 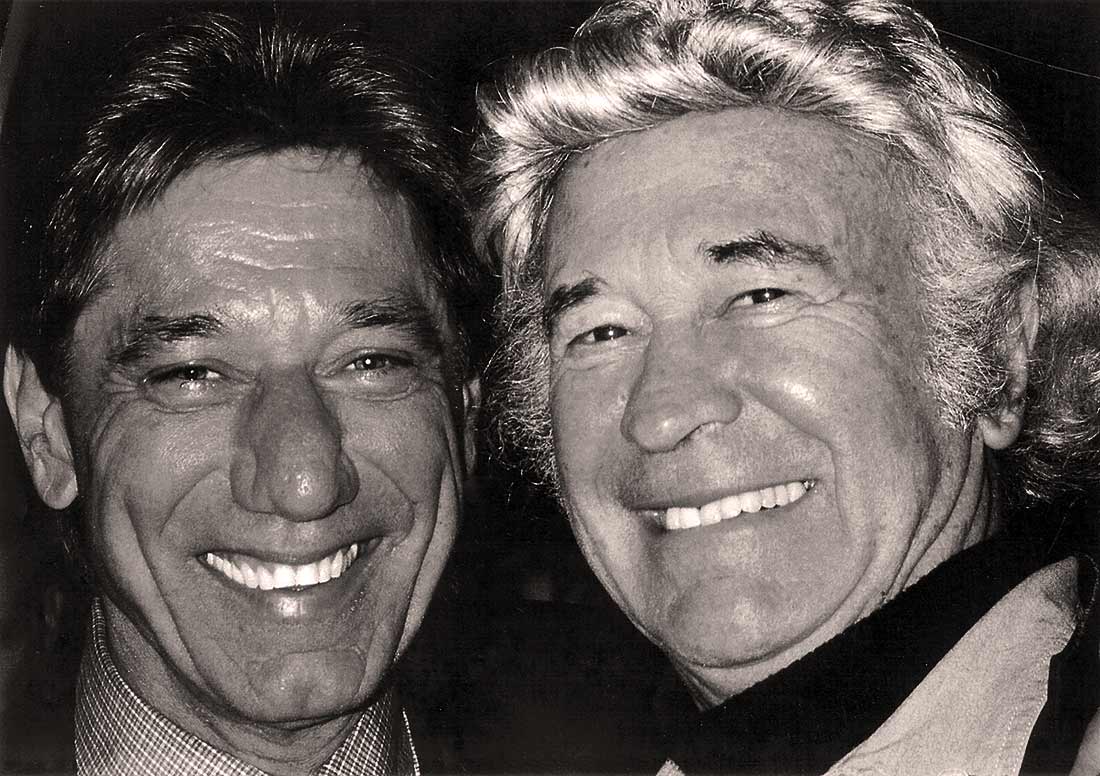 One of these boys was the toast of the town. The other is Joe Namath. (Photo courtesy of the San Diego Reader)

Dion Rich never stopped. There was always another challenge ahead of him and plenty of laughs along the way and that is when he came up with his rules of the game that included: “A photograph is the best evidence that you actually completed your ‘crash’ and that it was official.’’

Some other keys to crashing: “Dress the part, move slowly but quickly. Adopt the attitude that you belong there.’’

In his unique way, Dion belonged.

One of his favorite quotes to me that would always bring a big laugh from Dion himself was this: “I’m not Houdini … but I’m close.’’

And it’s not just the event itself: “It’s easy to crash an event, but what you want to do is not only crash the event, but then go to all the parties with the dignitaries,’’ he once told me. “That’s what sets the great gate-crashers apart. To attain greatness, you must be willing to take chances.”

Remember when he carried Tom Landry off the field at Super Bowl XII, that was only part of it. “That day I actually had the hat trick,’’ he recalled years ago. “I got Landry on my shoulders. I made it to the podium for the trophy presentation and then I danced with Landry’s daughter at the victory party.”

That is a Super Bowl record that will never be broken.

Swank remembers watching an Olympic ski jump from many decades ago. Then he saw someone holding a sign that caught his eye.

Not only crashing the Olympics but getting yourself free television advertising long before anyone thought of such a thing. That’s the beauty of Dion Rich.

“To me it was just fascinating,’’ Swank said, “because he was able to pull it off. I know a lot of cops who just hated him. But then there are other cops who realized, ‘This guy’s not really hurting anybody, he’s just having fun.’ ’’

Dion Rich knew how to live and wanted his cause of death to be listed as “Living.’’

Swank wanted to make one final point to me about Dion Rich.

“He was an honest ticket broker, ticket scalper,’’ he said. “Dion made deals and I remember someone in that business telling me, ‘The thing with Dion is that you always owed him, he never owed you. He always stayed a step ahead of you and he was extremely honest in his business dealings because if he wasn’t honest, people wouldn’t do business with him.

“Dion was a character. There aren’t many characters anymore.’’

One final word from Dion.

“Timing,’’ he once said, “is just as essential when leaving as when arriving.

Dion Rich left this world with one big smile.

That Kick the Bucket Party should be something.

previous article
Carving Out a Home
next article
Barry Foote 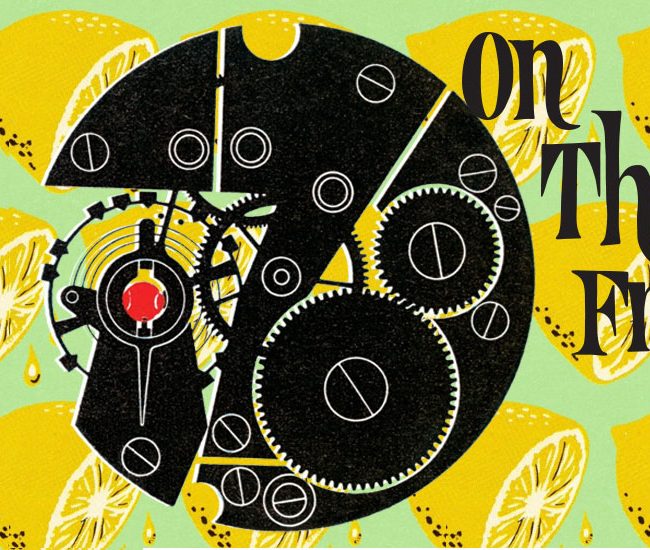 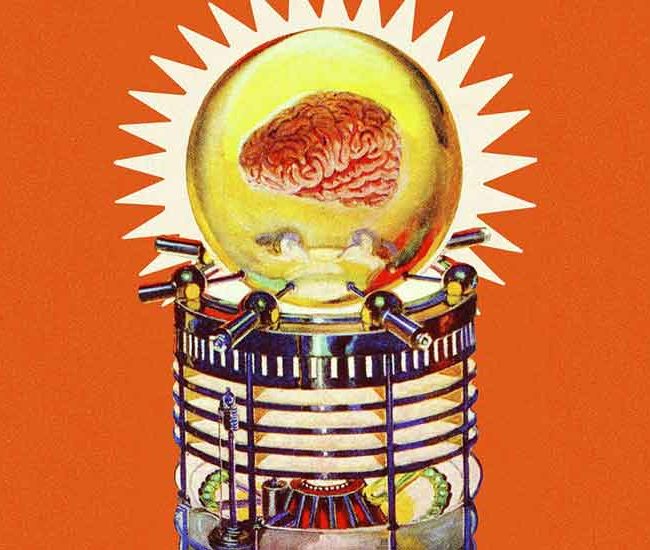