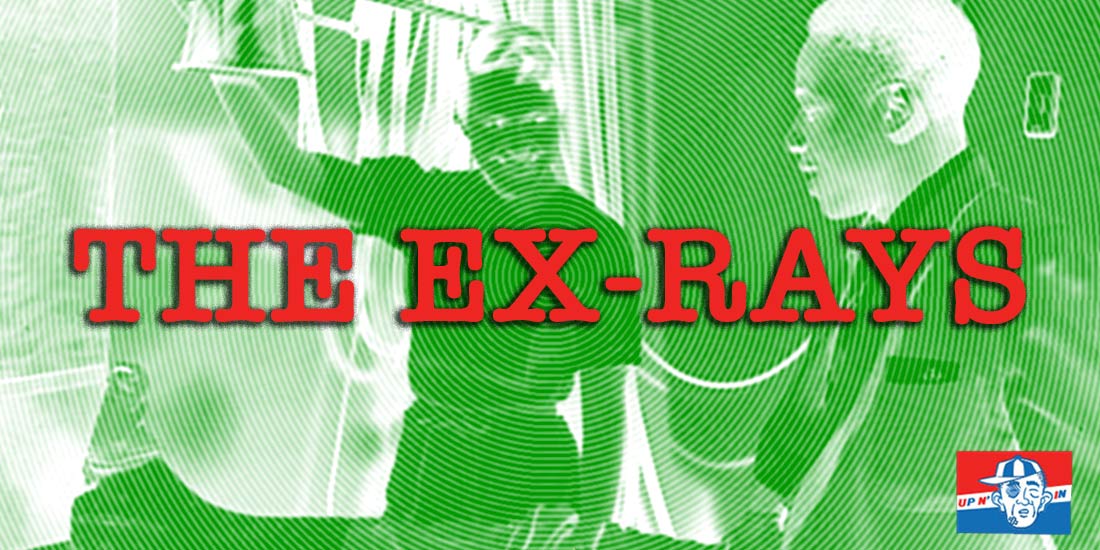 Back during the pandemic years (yes, by now we can refer to them in that way), it became apparent that all MLB teams lost revenue due to drops in ballpark sales – or to ballpark sales being actually non-existent, specifically in 2020.

But it’s the percentage of what each team’s ballpark losses represented to their total revenue stream that differed from team to team.

By now, Yankee owner Hal Steinbrenner has become (in)famous for asserting that his ballpark profit was the most negatively impacted due to the pandemic. But it’s also true that teams like the Tampa Bay Rays and Oakland A’s, who had been struggling with sustaining ballpark profit even prior to the pandemic, were hit pretty hard in the early part of this decade. 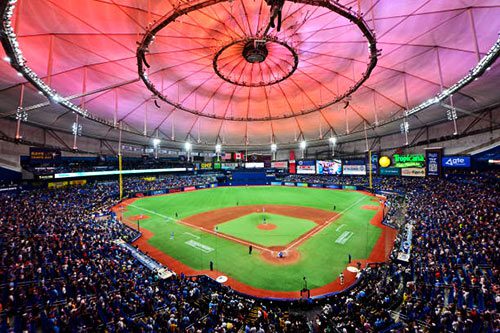 You have to figure overall ballpark revenue doesn’t really tell the whole story, however; as there always are ballpark costs that offset a lot of that revenue, and some of those costs are fixed whether there are fans in the stands or not. So the issue is really about team loss of ballpark profit, as opposed to loss of straight, hard revenue.

And ballpark costs vary from park to park, as does revenue intake. Larger parks in larger, more successful baseball markets cost more to operate – and thus even though they bring in more ticketed fans, more concession fees, and more merchandise sales, their overall profit is impacted by those costs. And, of course, the opposite holds true for smaller parks in smaller baseball markets.

“Fans in the stands” isn’t just an expression. It’s a necessity. Television and radio and advertising revenue may take center stage on most MLB balance sheets, but loss of all that direct-from-the-fan cash is no joke; even as we all joke about how much a hot dog and a beer cost at the ballpark these days. 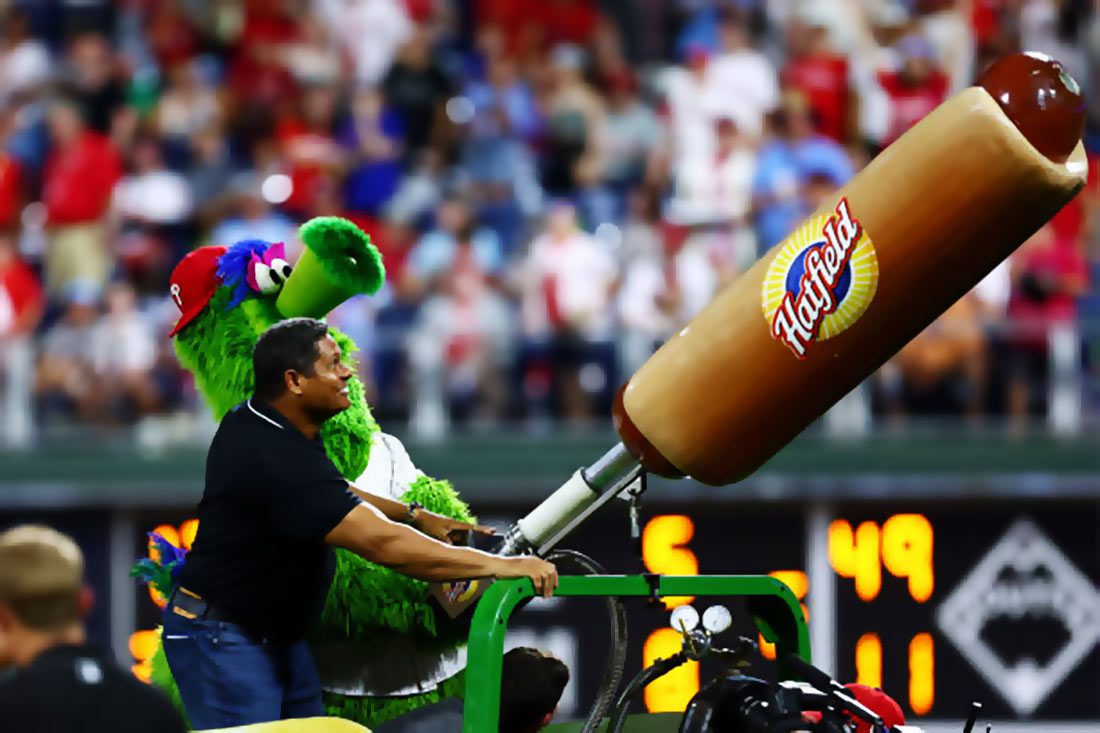 Former Philadelphia Phillies all-star Bobby Abreu launches hot dogs into the stands wit the help of the Philly Phanatic during a game against the Washington Nationals at Citizens Bank Park on August 6, 2022 in Philadelphia, Pennsylvania. (Photo by Rich Schultz/Getty Images)

Of course, in 2020 the baseball season was also truncated to 60 games, and that had negative effects on every team’s profits. And in 2021-2022, there was the MLB lockout, which likely caused some percentage of fans to walk away from the game – especially if they had been thinking of leaving already, anyway.

And as a result, if you layer the lockout on top of the pandemic, the past three seasons have been somewhat challenging for baseball – no matter which teams we’re considering.

The already struggling markets have really felt these effects, most clearly represented by a very offbeat plan at one point being considered by the Rays’ organization – one in which half their season would be played in Tampa Bay/St. Petersburg and half their season in Montreal, which has lacked a team since the Expos moved to DC in 2004 to become the Nationals (usually attributed to the 1994 baseball strike so negatively impacting Montreal fandom, the organization could no longer sustain itself in its original home city). 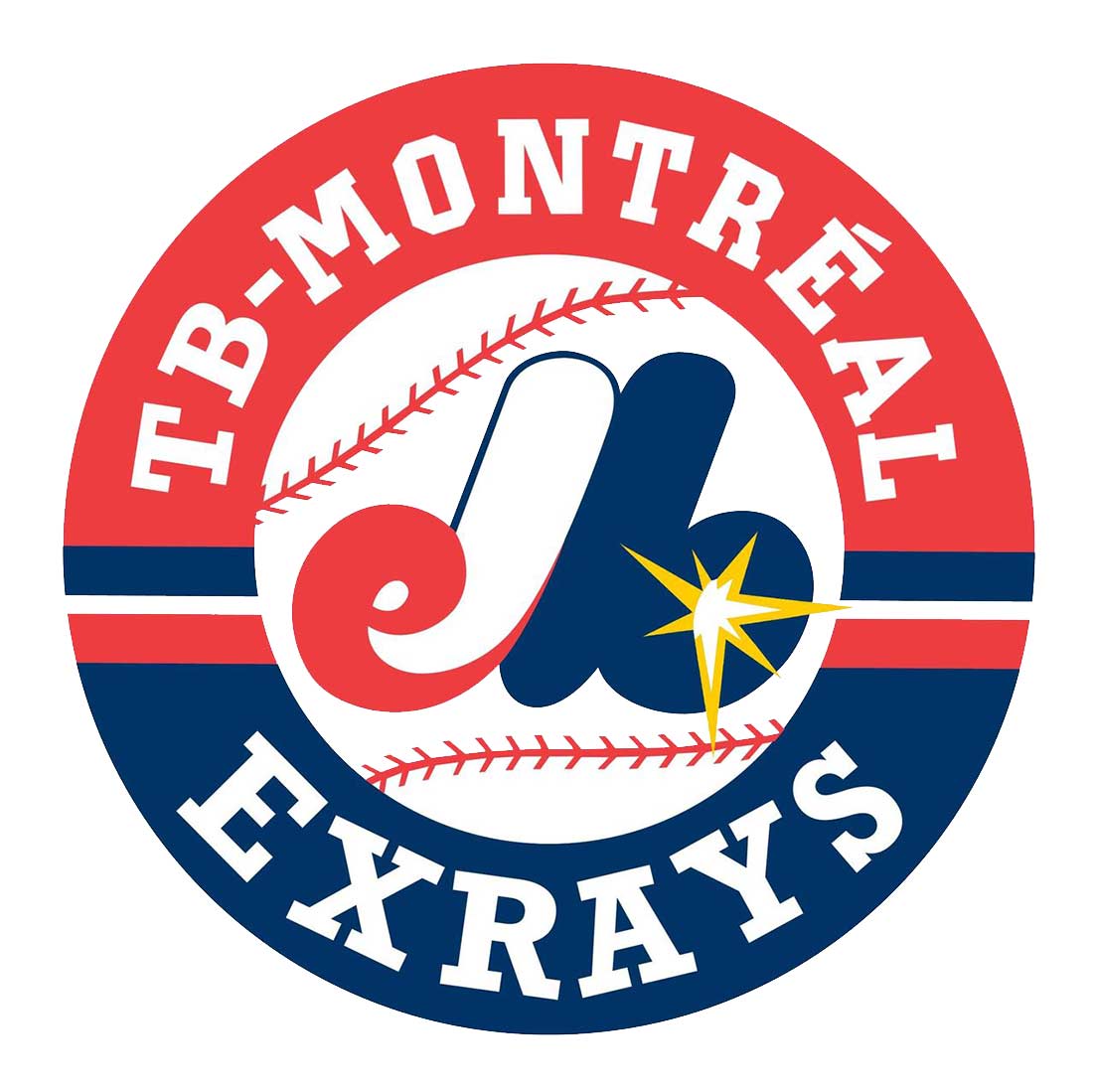 Well, as innovative as it was, that plan wasn’t approved by MLB; and the Rays, at least for now, remain where they are for the entire season while Montreal awaits a new team to be established in its metropolitan area. It appears baseball memory doesn’t always last 30 years, and Montreal fandom may be reignited by its hosting a major league team once again.

Alternatively, history always repeats itself and what’s happening to A’s and Rays baseball right now is somehow a descendent of what happened to Montreal baseball 25-30 years ago. 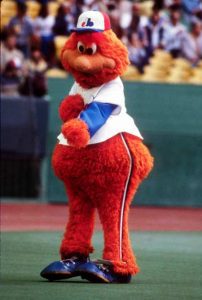 No matter what, all of this brings us to the topics of relocation, expansion, and realignment.

And so many factors go into these topics.

For years, jokes about the Rays and Tropicana Field have been fodder for players, social media, and just about anyone who cares about baseball and isn’t a Rays fan. The Trop’s lights go out (joke: they don’t pay their electric bill). The Trop’s not actually in Tampa Bay (joke: and who would want to drive to St. Pete anyway?). The Rays can’t survive without great pitching (joke: why pay for good hitters when there’s no one at the ballpark to see them, anyway?).

With a dwindling fan base, a very unattractive ballpark, and positioning in what happens to be one of the most competitive divisions in the league, who could blame the Rays for coming up with any scheme at all that would help increase revenue, potentially lower costs, and make the entire enterprise more profitable?

The truth is, if the Rays don’t get a new ballpark in a more accessible location for Tampa/St. Pete residents, they probably will be forced to relocate. And that may have to happen in parallel with MLB expansion, as MLB is considering adding two more teams, in two more cities, to increase the total to 32 teams.

The Oakland Athletics aren’t in much better shape than the Rays. 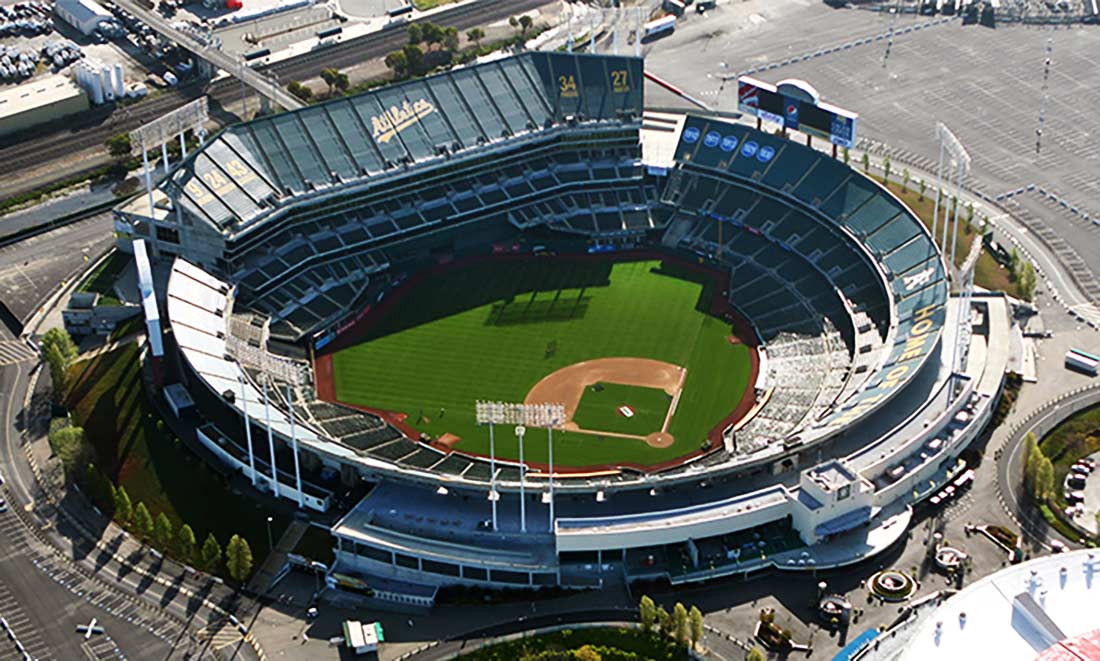 With an aging ballpark whose football team has relocated to Las Vegas (representing a decrease in maintenance investment); a team salary budget that for years has been based on a Moneyball philosophy; and an MLB neighbor with an attractive ballpark on the Bay (and who’s won three World Series since 2010), things don’t look promising for the current location of the A’s. They’ll either have to build a new stadium to keep fans coming to games, or relocate. Their recent attendance rates are embarrassing, and simply not sustainable.

Several cities are in strongest contention for an MLB expansion, among them Nashville, TN; Portland, OR; and, not surprisingly, both Las Vegas, NV and Montreal, QC. One question will be whether all these cities will become home to a major league team over the next decade, however; with the potential for each of the Rays and the A’s needing to relocate looming over the heads of MLB executives along with the desire for a two-team MLB expansion. 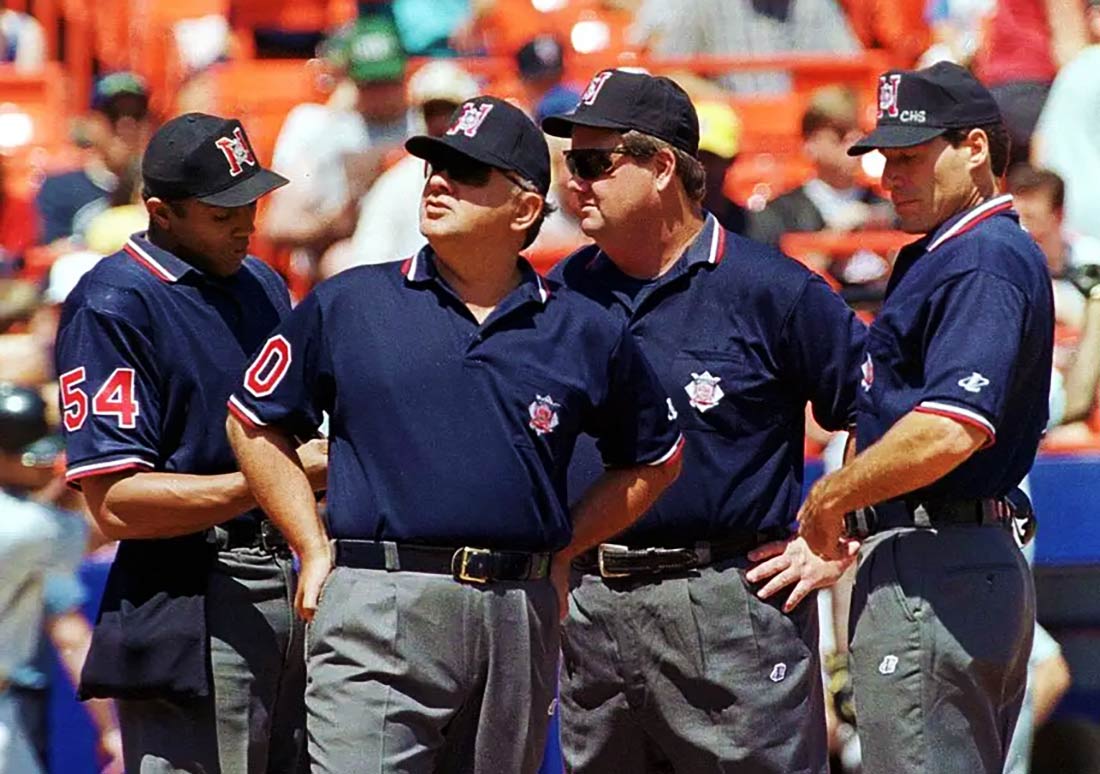 (Original Caption) NEW YORK, UNITED STATES: National League umpires C.B. Bucknor (L), Randy Marsh (2ndL), Joe West (2ndR) and Angel Hernandez (R) gather at home plate prior to the start of a game between the New York Mets and Pittsburgh Pirates 28 July 1999 at Shea Stadium in New York. Major League umpires from both the American and National Leagues said 27 July 1999 that they were withdrawing their letters of resignation. They had threatened to resign en masse 02 September 1999 in an attempt to force Major League Baseball to reopen negotiations for a new contract. (Photo: Stan Honda/AFP via Getty Images)

But neither the Pirates nor the Orioles are going anywhere – at least, not for now. The Orioles have begun to compete again in the same tough division faced by the Rays annually; and Pittsburgh is known for its beautiful ballpark and rabid fan base. Those lower player salary budgets are due to choices made by ownership; they don’t represent all the factors that may force a team to move to another city.

I’d argue for a salary floor minimum to go along with the luxury tax schedule that makes up MLB’s equivalent of a salary cap. This might help lessen the divide between the haves and have-nots in baseball even more than the current luxury tax, as proven by owners like Steve Cohen of the Mets. But that’s a topic for a different day.

Regardless, and no matter which cities are chosen for relocation and/or expansion, adding two teams to the current suite of 30 member teams of MLB may force some kind of realignment.

For a number of years after the last expansion (in which both the Rays and Diamondbacks were added to MLB) and prior to the Astros moving to the American League, there were 16 National League teams and 14 American League teams. The Brewers switched from being an AL team to an NL team in order to keep the number of teams in each league at an even number, to facilitate interleague play.

Eventually, however, the Astros moved to the AL to create an equal number of teams again in each league; in part because having one division with only four teams in it was unfair and skewed. With the introduction of the universal DH and shared umpires across the two leagues, interleague play has become less of an oddity and attraction – and the original reasoning for the even number of teams in each league has thus become moot. 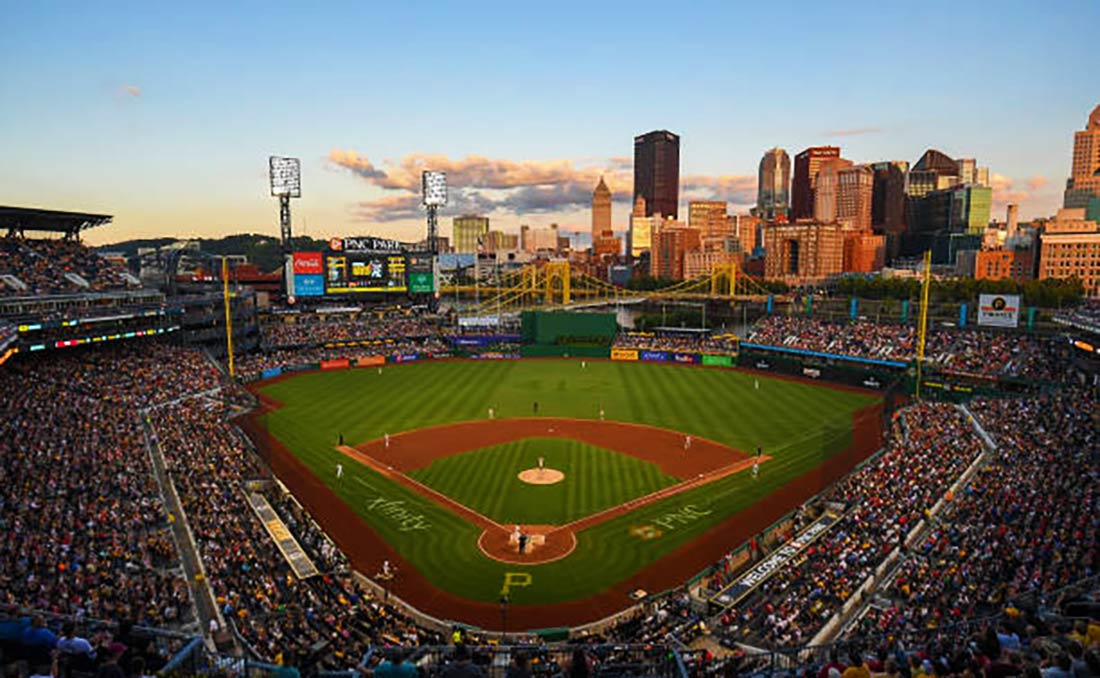 A general view of the field in the fourth inning during the game between the Pittsburgh Pirates and the Philadelphia Phillies at PNC Park on July 30, 2022 in Pittsburgh, Pennsylvania. (Photo by Justin Berl/Getty Images)

MLB has not yet made public what a realignment might look like if two teams are, indeed, added to its roster. Several proposals have been made by various sources, but the whole concept of another expansion in still enough in its infancy that what a realignment may become is definitely secondary.

So, we won’t be seeing the Tampa Bay-Montreal ExRays any time soon. But the next decade will bring MLB change once again, of that we can be sure. The Rays and the A’s will have to resolve their problems, we may see new teams in Nashville and Portland or elsewhere, and the current configuration of 15 teams across three divisions per league may change, as well. Nothing in baseball stands still – it never has, and it never will. 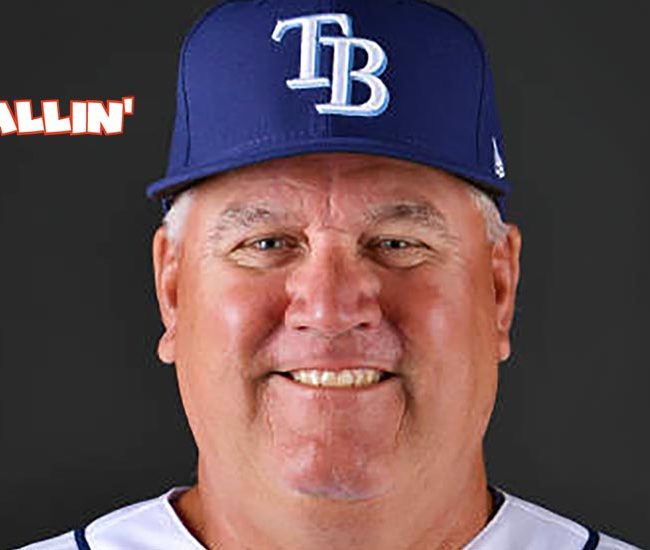