For Glove of the Game

What happens though, when your favorite glove finally loses the game to time? Or even worse, your dog discovers a new chew toy?

The pure love of baseball – and softball too – is found in a glove. There’s that leather smell, the comfortable way the glove fits your hand. The sound of the ball popping a mitt.

At BallNIne we love to answer your baseball questions and D&J Glove Repair can save your baseball soul of a glove. Jimmy Lonetti and his son

Dom have come to the rescue of gloves for a decade and their small business is a marvel.

Their work is magnificent.

Jimmy came up with the idea when Dom was in Little League.

Think back to your favorite glove, having it restored and what that would mean: all the great glove makers, when leather was truly the best leather, and most were made in the USA.

There’s Rawlings, Spalding, Wilson, Worth, MacGregor, Nokona, Mizuno, newer companies like Akadema and others. Nokona still makes its gloves in America in Nokona, Texas. Nokona made the replica vintage gloves used in the movies Field of Dreams and A League of Their Own.

A United States Postal Service carrier by day, Lonetti’s fancy glove work is a labor of love done in his home garage shop in Minneapolis. Any make, any model and the master mitt mechanic can save the day as he fields requests to repair gloves from everywhere. He recently sent a beauty back to Hawaii.

The Story last Sunday was about Eddie Feigner of the King and His Court fame. Lonetti saw The Story and noted, “I used to have an Eddie Feigner glove floating around the shop that I ended up selling. He was a big MacGregor guy, he had an endorsement deal with MacGregor.”

Lonetti has seen all the signature-model gloves come through his shop, Willie Mays, Mickey Mantle, Harmon Killebrew – a Minnesota favorite along with Tony Oliva – Dwight Gooden, Brooks Robinson, Joe Torre, Dick Groat and so many more.

Some gloves come in without signature-model endorsements, too. He recently restored just such a glove, noting, “A 77-year-old grandmother from Utah wanted her old glove fixed up so she could play catch with her grandson.”

That’s what this is all about. “Hey Grandma, wanna have a catch?”

“ I’ve worked on a ton of sentimental gloves,” – Lonetti 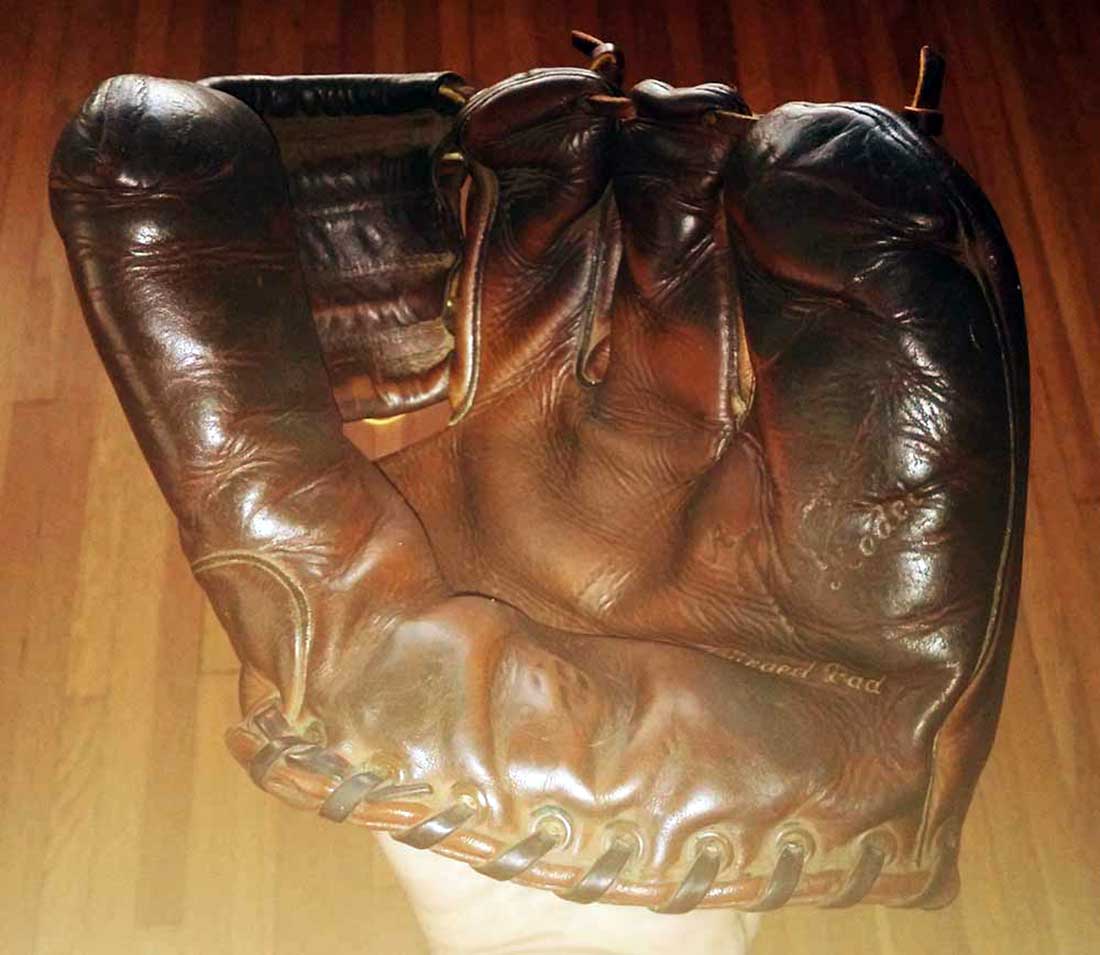 Grandma’s Glove is ready to go

“I’ve worked on a ton of sentimental gloves,” Lonetti told me. “I just got an email today from a woman who wanted me to fix up a catcher’s mitt because her husband used to use it to play catch with their two sons and he recently passed away. She really wants it for her two kids.

“I have gloves fixed up from someone who didn’t come back from the Middle East; gloves that have been rescued from houses that burned down that are totally water logged and smelled of smoke, but the guy said, ‘This is the only thing that survived the house fire. Can you bring it back?’“

Lonetti, 56, brings them all back.

“Around Father’s Day I make a big push to fix up gloves for dad,” he said. “I only wish I could be there when he opens it up to see the expression on his face because some of these things come here in pretty tough shape and after a little bit of work, conditioning and new laces, they can look pretty good.” 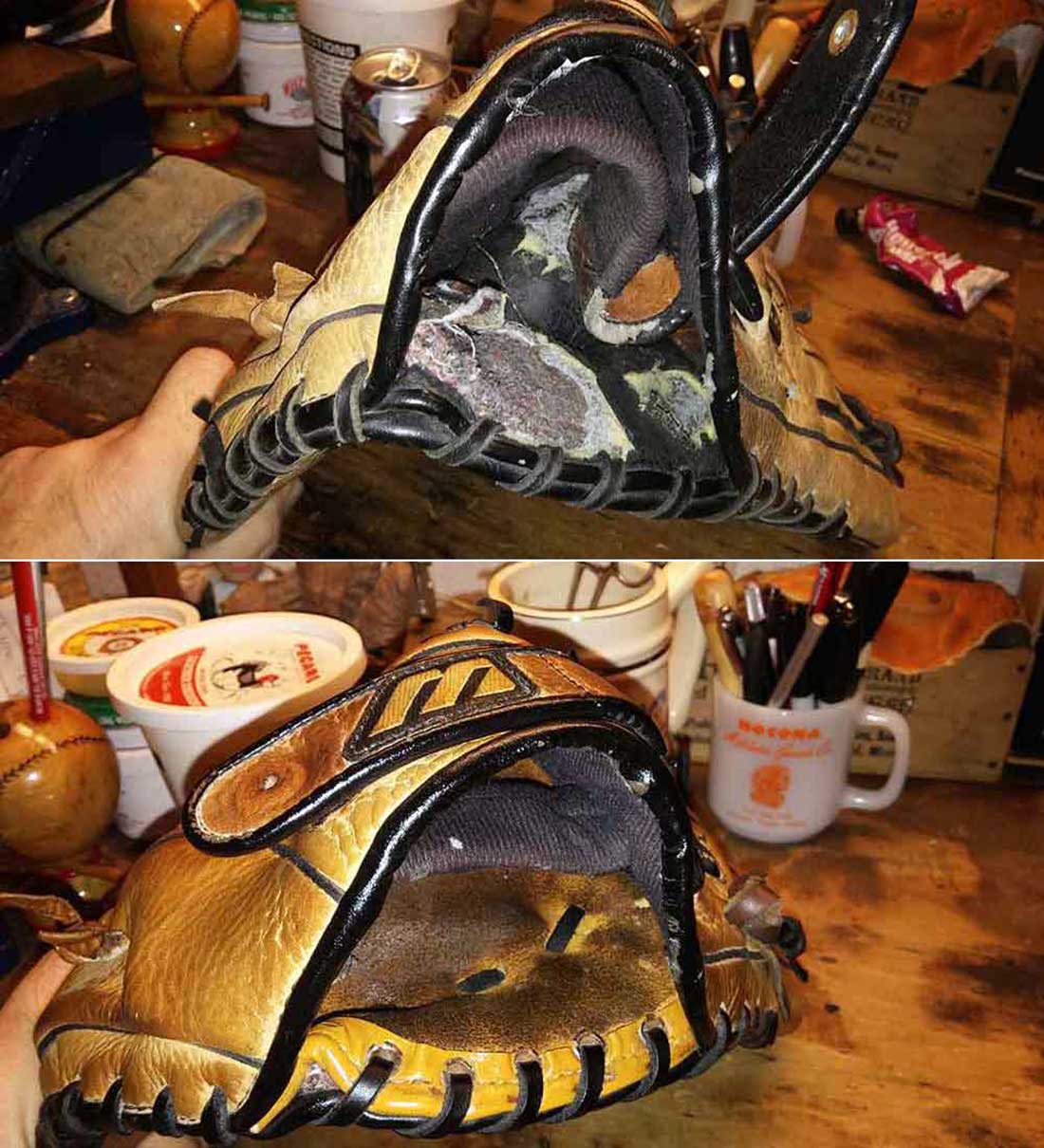 The new laces come from Glovesmith Leather, made in the USA.

This is how the business started.

“Ten years ago Dom was in Little League and we kind of saw a need to fix up gloves among the teammates and among the other guys in the league, and all of a sudden a creative guy I knew made us a logo,” Jimmy explained. “We just made up some tee shirts as a kind of fun thing to do and I think an eighth grader built me my first website.”

Lonetti got knowledge from the 2003 book: Glove Affairs: The Romance, History and Tradition of the Baseball Glove by Noah Liberman.

“That book told us what we needed to have to repair a glove, he broke it down, what cleaners and everything you need, it’s a great book,” Lonetti said.

“Then Google takes off and I got some pretty good search results on Google. There’s not many people who do it and I don’t pay Google anything but I get calls all the time,” Lonetti said. “People wonder: Where are you? They say: ‘I’m in Seattle, where are you?’ I tell them I’m in Minneapolis, but we’ll fix your glove for you.” 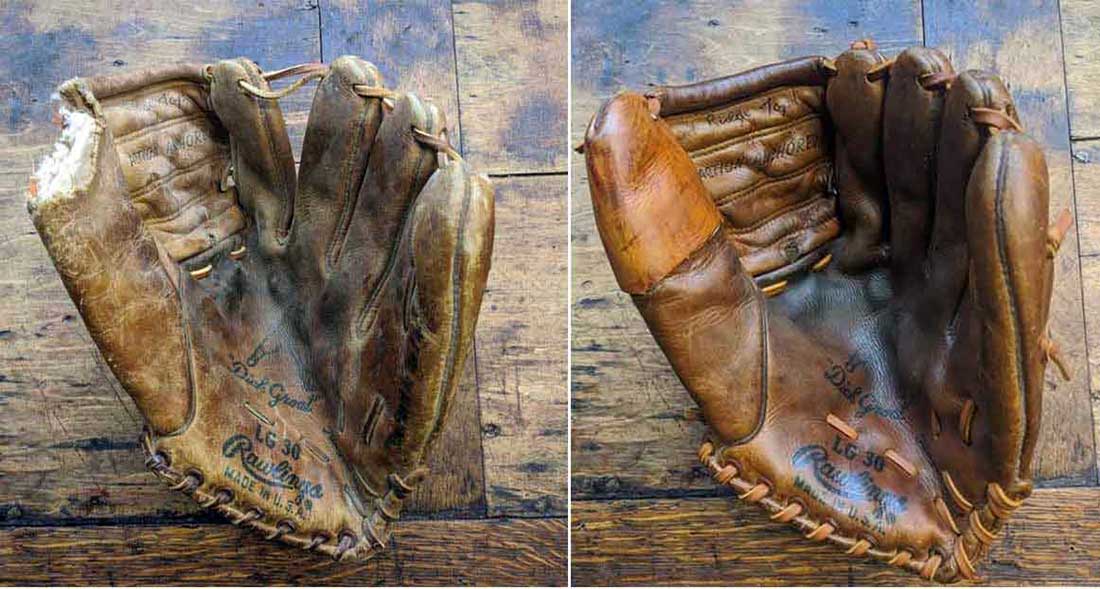 From chew toy to gamer

Lonetti averages about glove a day and the before and after pictures are amazing. “I got pretty much perfect Google ratings, which is kind of nice,” he said proudly.

Does he have a favorite glove maker?

“Me and my son, kind of our favorite glove manufacturer is Nokona because they are still made in the U.S. but repair-wise, it seems I get a lot of the old Wilson gloves, the A-2000s when they were still made in the U.S. from the late ‘70s and 80s. The hinged web. A lot of guys hang onto those things forever. I love the lacing pattern, the huge web is kind of unique and I can always tell the gloves that were made in the U.S. before they started kind of shipping things off overseas for production.”

Leather was a better grade back then, Lonetti said. “Back in the 70s before hormones were given to cows and that kind of stuff it took longer for the calf to grow into a cow, so the hide had more time to develop. You just had better hides back then.”

As I’ve traveled around the country I’ve picked up a few gloves in second-hand stores so I will be sending three gloves to D&J; a red, white and blue Rawlings Brooks Robinson model, a classic MacGregor Gil McDougald and a Rawlings Fastback Trap-eze “Heart of the Hide” with the American Flag on the backside.

“Those take a little more doing, a little more laces involved,” Lonetti said of the Trap-eze. “They are cool gloves and the Heart of the Hide – made in the USA – that’s a good one to hang onto, that’s a decent glove.

“I love the red, white and blue gloves, I just fixed up one for the 4th of July that I posted,” said Lonetti, who also buys second-hand gloves, repairs them and resells them, especially to younger players who need quality gloves. “I fixed up some nice Brooks Robinson gloves, sometimes it almost seems like the level of the player corresponds with how nice the glove was made.”

The gift of repair is in his blood. “My grandfather, when he immigrated from Italy, he was 16 when he became an apprentice in the shoe repair business and eventually had his own shoe repair shop,” Lonetti explained. “When I was a kid I would go Saturday errands with my dad and there was always a stop at my grandpa’s shoe repair shop. I can still smell the leather and the same glue that now I use to glue some of the glove repair jobs I need to do. It’s a memory that comes back when I smell that and I have some of his pictures displayed in the shop. I have a big sewing machine that I picked up that is essentially the same sewing machine that shoe repair guys would use back in the day.”

Old-fashioned craftsmanship at its best.

Gloves come back to life at D&J

One of the first gloves Lonetti did was a Reggie Jackson model. “This was back when Dom was in Little League,” Jimmy said.

There was a request from a teammate’s father who once owned a Reggie Jackson glove when he was a kid and lost it. The father said he would love to have that glove back. “It’s actually a pretty common glove so I was able to track it down right away, and fix it up for him,” Lonetti said. “An RBG36, a pretty common Rawlings model. Between Reggie Jackson, Dale Murphy and a couple of other guys there were a lot of those gloves floating around.”

Dom is in college now but still helps out.

“I get him over here during the offseason a couple of days a week and I put him to work,” Jimmy said. “A lot of funds go to his college education and stuff. Kind of a nice little side source of income for us.”

Dom & Jim. Baseball is a game of fathers and sons, turns out glove repair is too.

Lonetti said he only had “hardware store” baseball gloves growing up, so it is so much fun to see the classic gloves come through the shop.

Who doesn’t love their first real glove? Let BallNine know below in the comments section what model you had growing up.

“A lot of what we do is bringing back memories for guys,” Lonetti said, revealing the heart of the hide of his business. 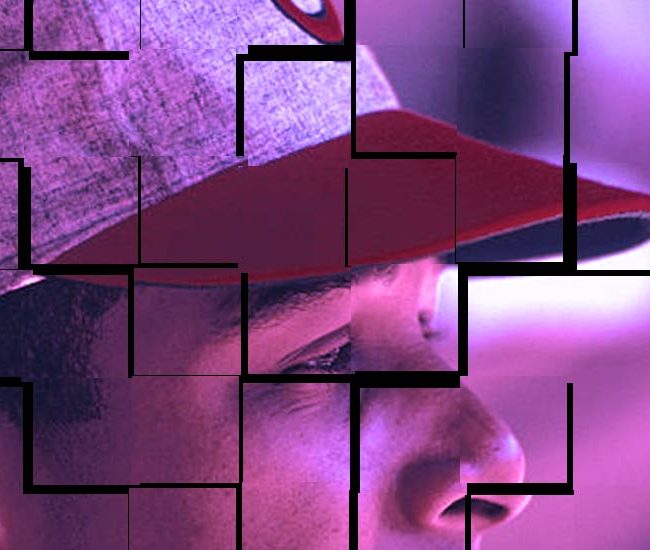 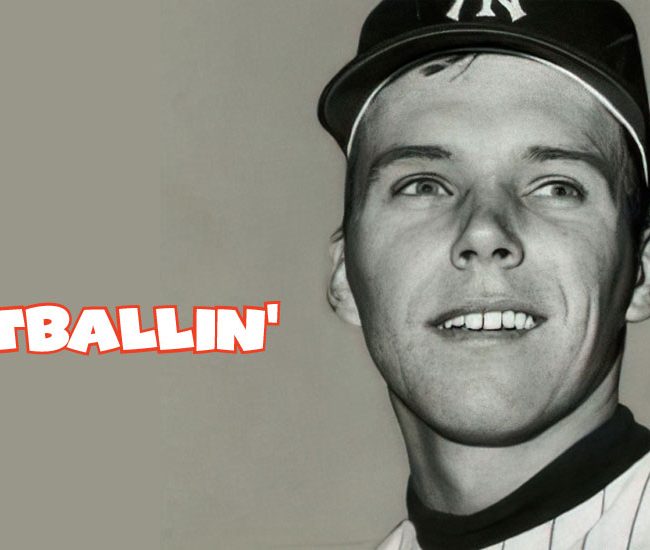