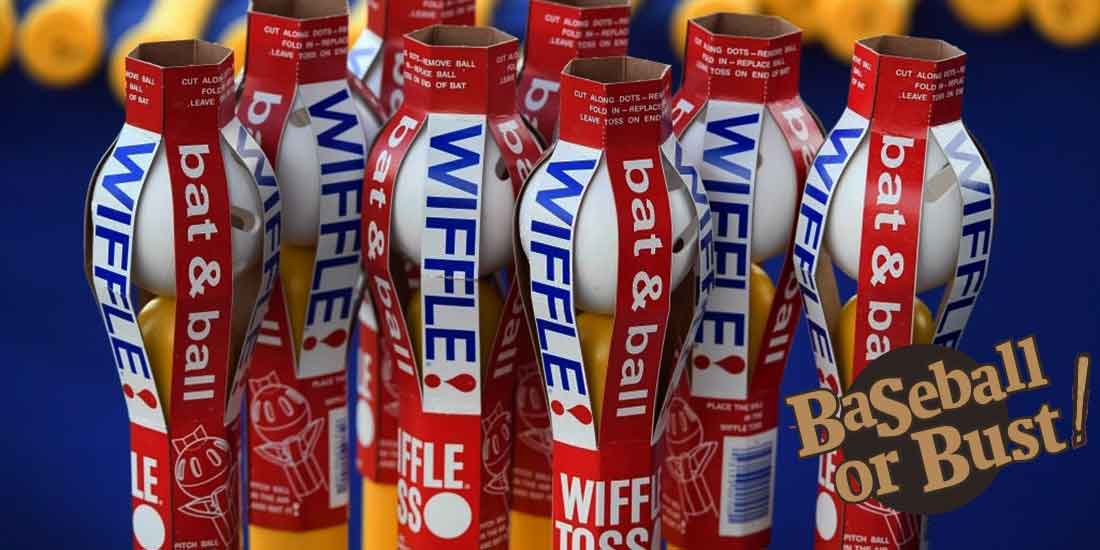 We’re the same age, me and Wiffle Ball.

In 1953 David N. Mullany created the magic plastic ball with eight perforated oblong holes so his son could play baseball in the backyard. The game really hasn’t changed that much in 67 years.

The yellow plastic bat came around a few years later, a package deal, batter up!

The joy of thwacking that white plastic ball with that yellow bat is a sound and feeling you never forget. You never really grow out of wanting to play Wiffle Ball, and that is something that young entrepreneur Nate Fudala took into account when he created a new way to play.

He brings the backyard Wiffle Ball game to you, creating a portable miniature field, including a collapsible fence, bases, a mound, a professional turf batter’s box, and a much-needed K-Zone/scoreboard that has a big hole near the top middle. We’ll explain later.

The name of his company? Backyard Rule.

“I’m one of four boys,’’ Fudala, who grew up in Cincinnati, told BallNine. “We had a cool backyard field set up and that’s really where the framework was made for the concept of play.’’

There are plenty of Wiffle Ball leagues and tournaments out there but as Fudala said, “I haven’t come across anybody with a format like mine where we go to all these different locations and we can set up the field wherever.

“We’re coming to you. That’s in our slogan: Bringing our backyard to you.’’

Fudala, 30, lives in Florida, which has the perfect year-round climate, and plenty of beautiful parks with lights to play Wiffle Ball.

He can bring his portable ballpark to any park, set up in the grass for tournaments, birthday parties, Little League fundraisers, graduation parties, team building events, and, of course, home run derby.

“I’d say 99 percent of the people who come out to play, absolutely love it,’’ Fudala told me.

He has a fine arts degree from Flagler College in St. Augustine, Fl., and ran 63 such events last year, criss-crossing the state, mostly on weekends. That’s a lot of Wiffle Ball love.

Then came the Covid-19 shutdown. Covid not only shut down MLB, minor league baseball and Little League. It shut down Fudala’s business but now he is getting the company back on its feet again to the joy of those who love to crush a Wiffle Ball.

When Wiffle Ball founder David N. Mullany — his family still owns the company based in Connecticut — created the first Wiffle Ball from hard plastic parts that were wrapped around perfume bottles to protect them, he had no clue the invention would be such a life-changing success for him and future generations of his family. 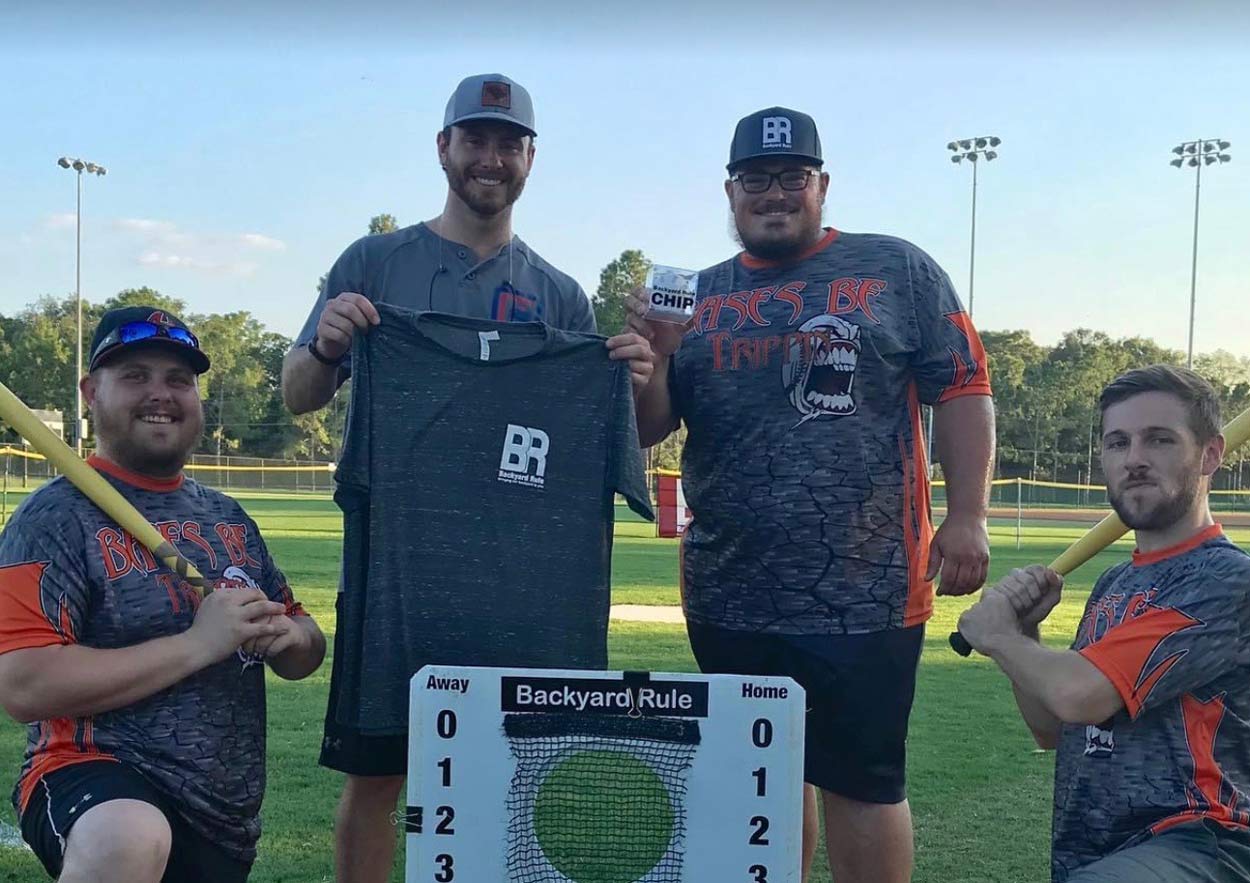 In fact, he was so strapped for cash at the start that’s why he dropped the H in the word whiffle to save a little money on sign making. That’s why they spell it Wiffle.

I’m also one of four boys and we played Wiffle Ball every day for hours on end in Kenilworth, N.J., in the backyard and in the driveway after my father left for work. It was a summer ritual and we helped keep Wiffle Ball in business running down to the corner store every time one of our Wiffle Balls would crack along the holes and collapse despite tape job after tape job.

Too much tape and the Wiffle doesn’t whiffle.

There is nothing like getting the first swings in on a brand new hard Wiffle Ball. More powerful hits, more action.

Fudala wanted to make sure his game had action, too.

“I couldn’t stand it when I didn’t have a ball hit to me all day,’’ said the former four-year Flagler baseball player, who finished with a .300 average. He prefers the offensive end of the game. So his game favors the hitters.

Most Wiffle Ball tournaments and leagues allow the pitcher to curve the ball, throw sliders, screwballs and drops and “speed balls”, as Bruce Springsteen once sang, but Fudala makes it clear the pitcher in his game is there to allow the hitter to put plastic bat on ball. No bases on balls. You can strike out (three strikes) but you can’t walk.

In an effort to keep the game from being delayed and having a batter standing there all day waiting forever for the perfect pitch, (yes, we all know THAT guy) Fudala eventually figured out he needed to cut a large hole in his K-Zone board so if the ball hits the hole the batter is immediately called out.

Essentially, he replaced that old beach chair that we all used for the strike zone growing up, with the K-Zone board with the automatic out hole. The threat of being called out on a decent pitch sped up the action.

“Our big difference from other Wiffle Ball events is that we are slow pitch, the common rule is that each pitch is supposed to have an arc on it,’’ Fudala explained. “Late in the tournament pitchers, when it is a big situation, pitchers naturally throw a little harder and that’s when I have to reinforce the sportsmanship and reminding them it is supposed to be a hitter’s game. Home runs are going to happen.

“I cringe watching other leagues and tournaments when all their highlights are of pitchers just mowing down hitters from 40 feet away,’’ Fudala said. His mound is 35 feet from the plate, the best distance to make the arc work.

The field all set up and ready for action

Fudala Field starts with portable fencing 70 feet down the lines, 80 feet in the gaps and 90 feet in dead center, your standard Wiffle Ball dimensions. Counting the pitcher there are four players on defense, but five players can hit. There are other tweaks to make the game move along. Runners can be pegged by the fielders. That dodgeball aspect is fun and for plays at first base to record an out, the fielder doesn’t throw to first, he or she just has to get the ball back to the pitcher before the batter touches first base.

There is no replay. Thank God.

There is an honor system and Backyard Rule is based on competitiveness but also teaches sportsmanship. Isn’t that nice for a change? At least that is the plan. In all the events Fudala has hosted over the last five years, he said, “There have been two fistfights that I can recall. For the most part everybody has been really, really good with each other.’’

Athletes are a competitive bunch.

“People are really great toward each other but it’s not uncommon to have somebody out there playing who isn’t really playing fair,’’ Fudala said, earning his doctorate in Wiffle Ball Studies of Human Nature. “That is not a problem as long as it is just that one person and other guys are able to brush them off and continue to play. Everyone is still fine. But as soon as two people start acting unfair toward each other that’s when it gets to be a little bit of tension in what is supposed to be an easygoing atmosphere.’’

“I am there to settle rule disputes, but very rarely have I had to step in and just make a call,’’ Fudala said. “I am upfront with that at the beginning, I say it is self-policed and this is a sportsman’s game and if you are unable to do that, this isn’t the place for you.’’

There are some amazing plays made with no gloves. Fielders make leaping catches over the fence, throws that would make Bryce Harper jealous where runners are pegged dashing home. There even is volleyball action, where the fielder at the fence jumps high to swat back a blast as another fielder catches the ball before it hits the grass. If the ball hits the grass, the fielder can flip to the pitcher to get the lazy hitter who was standing at home admiring his “home run’’ instead of running out of the box, much like today’s major leaguers. 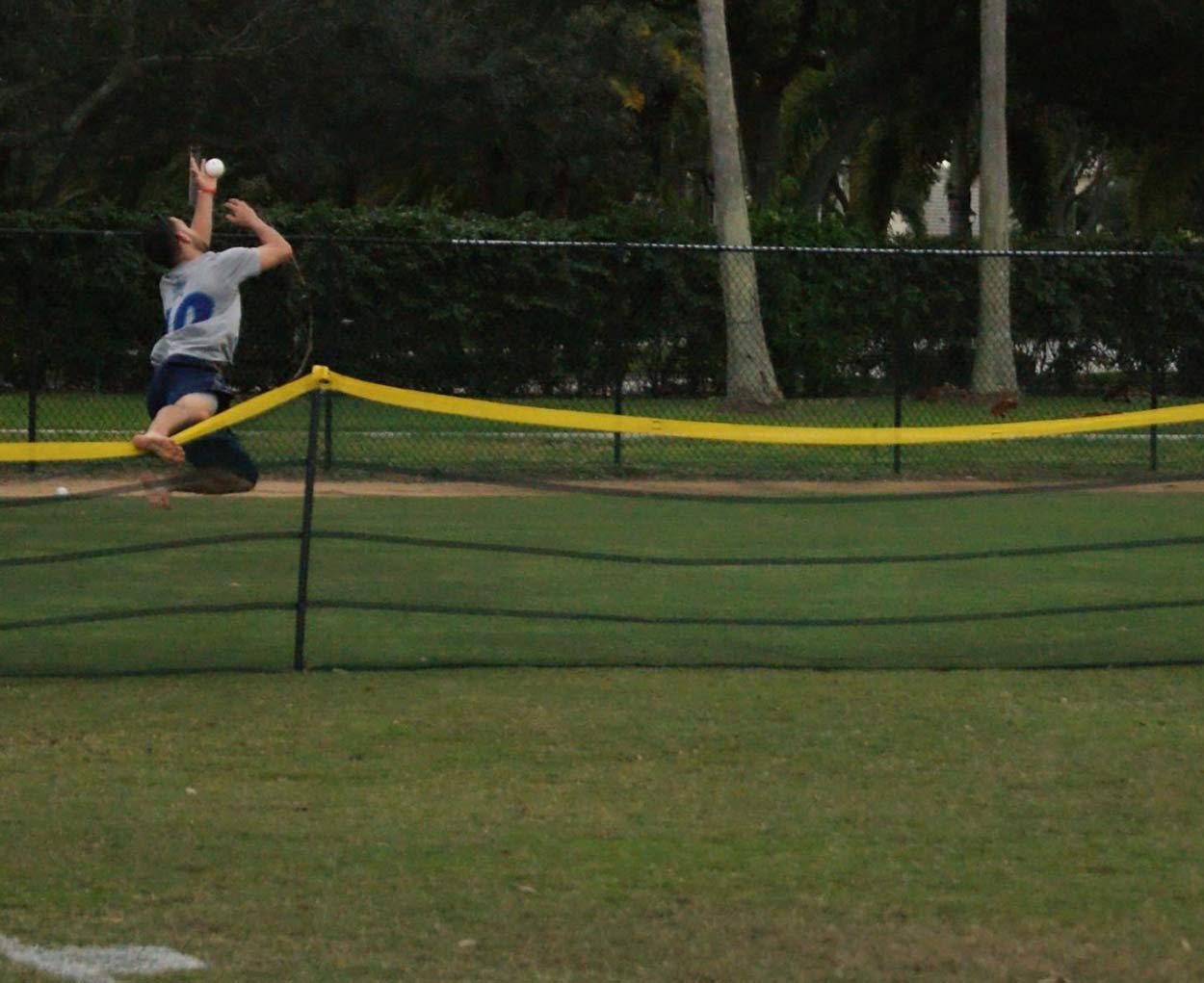 Teams are creative and that is half the fun of playing Backyard Rule.

You can check out highlights on Facebook at Backyard Rule, Instagram @Backyardrule or go to BackyardRule.com. For more information email Nate@Backyardrule.com.

When I covered the Padres and eight-time NL batting champ Tony Gwynn, the future Hall of Famer was a big believer in Wiffle Balls. He devised a hitting drill where he would move the batting tee to different areas for plate coverage. He would have a net placed about five feet in front of the tee and Gwynn’s belief was that if he squared the Wiffle Ball up properly, the spin on the ball would backspin it off the net directly back to the tee.

That was how he would gauge his swing. Who needs a Launch Angle coach?

Wiffle Balls really can be used by major leaguers, much like in that classic TV commercial where Hall of Fame Yankees left-hander Whitey Ford is in his backyard throwing curve balls, screwballs and drops with the Wiffle Ball.

It all comes back to the backyard.

For a team to enter a Backyard Rule tournament, the cost is $150 and if you pre-register it is $25 cheaper. That price includes getting the complete field setup, painted foul lines, foul poles, renting of the area from local parks departments and every bit of equipment, bats and balls. You are guaranteed a three-game minimum and all you have to do is show up.

This month Fudala hosted weekend events in Palm Harbor and Sarasota after being shut down for so long and is looking forward to a full slate again and expanding into Georgia. The players, he said, were so thankful to be back playing in the fresh air and having fun. 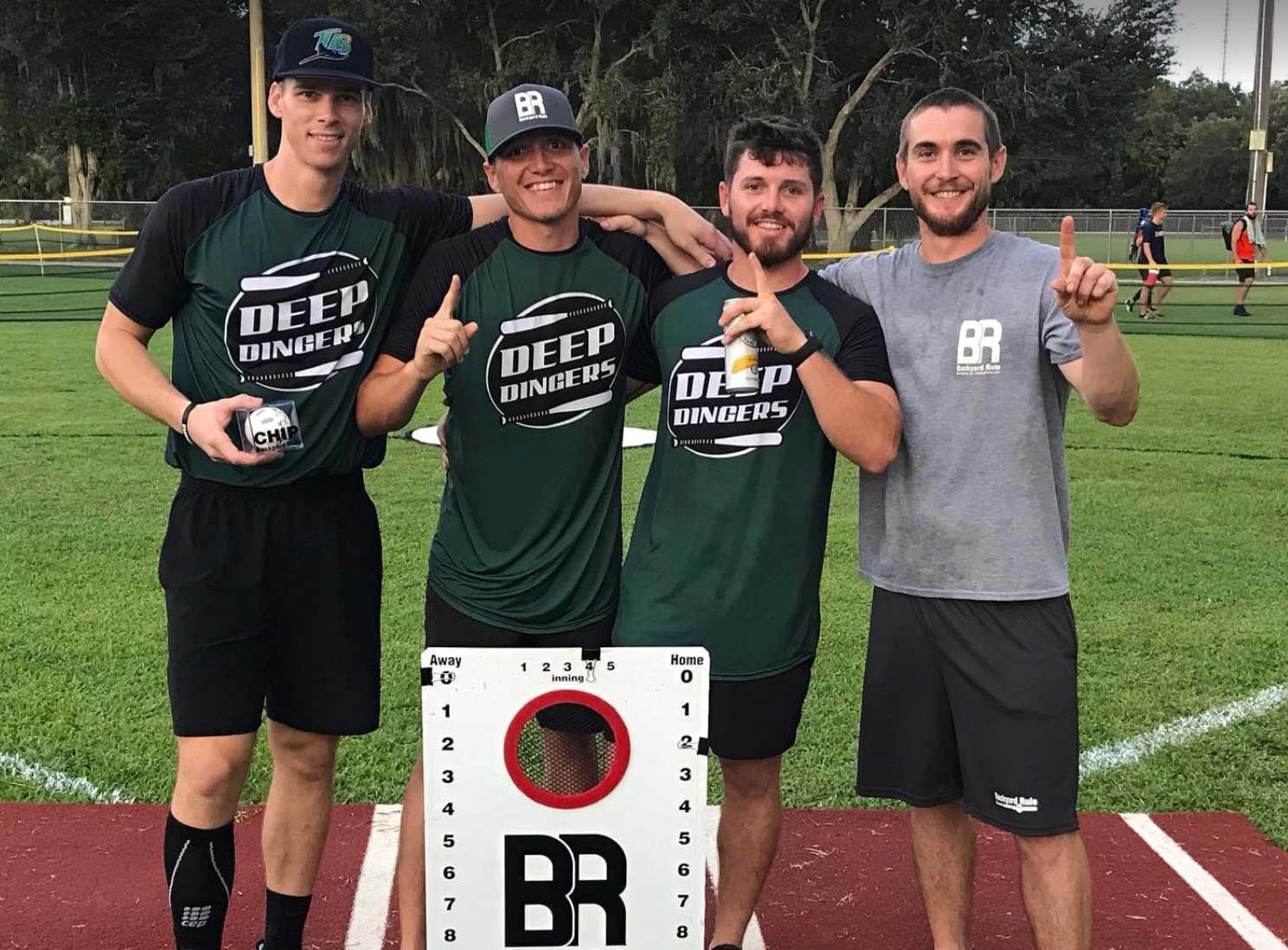 Fudala (far right) with a recent group of champions

“It’s great to see people have a great time,’’ Fudala said. “People competing against each other and playing their hardest to win but also being easy-going enough where if there is a critical play that could go either way, the players are able to work it out. That’s what the brand is about, sportsmanship and competitiveness, a nice balance between the two.

This is a social experiment as well as a physical test.

“It’s a good escape for the players,’’ Fudala said.

Old-time fun in a new way.

“At the start of the tournament I open up three new balls per field that I have set up,’’ Fudala said. “Guys get all pumped up with the new ball.

Backyard Rule offers video highlights so these Wiffle Ball All-Stars can take their game home back to their own backyard and watch on their modern devices. I only wish growing up I could have the highlight tapes of the games at the Kernan household.

With all the home run swings and fantastic one-handed catches, I do remember this: there were plenty of arguments.

I need to work on my sportsmanship game. 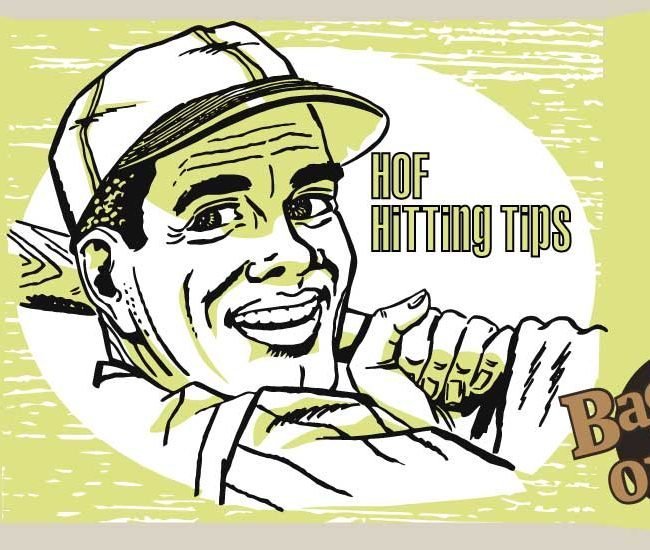 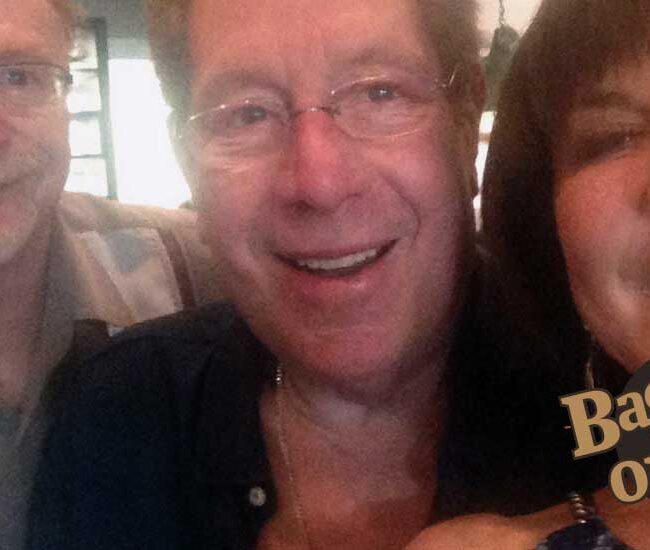