They don’t care about the game.

Major League Baseball continues its march to oblivion by hurting the ones who love it the most, the fans. In many ways under Rob Manfred and these billionaire owners it has become the cruelest of sports to follow, constantly bombarded by the negative.

The once great numbers in the game like 714 and 755 and 61 are rendered meaningless. The only numbers that matter are the ones that come with dollar signs.

And never is baseball’s abandonment of the fan more obvious than now with the owners’ current lockout of the players in spring training. The start of the regular season is in jeopardy, but spring training games have already been lost in a time where we need to come together, not be apart.

Many are focused on the start of the season, I understand that, but when you lose spring training games, the rite of going to spring training, you lose another chapter of romanticism in the game. That is what is being destroyed by Manfred and the Lords of Baseball.

They don’t care because they don’t get it.

“The sound of a fastball popping in the glove or a baseball squarely hitting the bat is missing in Rob Manfred’s Silent Spring.”

AMBS is a man of the people and loves to talk to fans during spring training. In doing so I would get to know the fans through years of covering the Padres, Mets and Yankees. You would see the same faces every year and there is comfort in that.

I reached out to one of those fans Saturday named Steven Merrill. I’d see Steven and his dad every year in Port St. Lucie along with other fans like Cindy Moskey and Joe LoVerde and his family.

These are the voices the owners never hear and The Story brings them to you.

“To see the players up close in the workouts and see how they interacted with the fans, that was the big thing,’’ Steven, 22, told BallNine. “Any given day you can be face to face with a major leaguer and they are calm and relaxed. It’s not in-season. They are not blowing anybody off after a game, they are there and they give you time.’’

When the games start there are still workouts in the morning and that is a golden time for the fans.

“If there were no workouts and just games, we would not go down there,’’ Steven said. “You are pretty much shot by 2 o’clock, once the starters are out of that game, you want to go back to the hotel, go to the pool and then go to dinner.’’

In March of 2020 Steven and his dad Everett landed in Florida on their flight from New Jersey and that was the day everything got shut down.

“And we didn’t go down last year because access was limited, so it just wasn’t worth it,’’ Steven said.

This year was going to be a clean start for so many fans.

Things are booming here in Free Florida and the amount of people from up north is growing, even in my little community in Northern Florida. I am seeing a ton of what I call Double License Plate cars, the cars from New York, New Jersey, Connecticut, Pennsylvania and Massachusetts. Other states as well, including California. People want to be here in the Sunshine State. 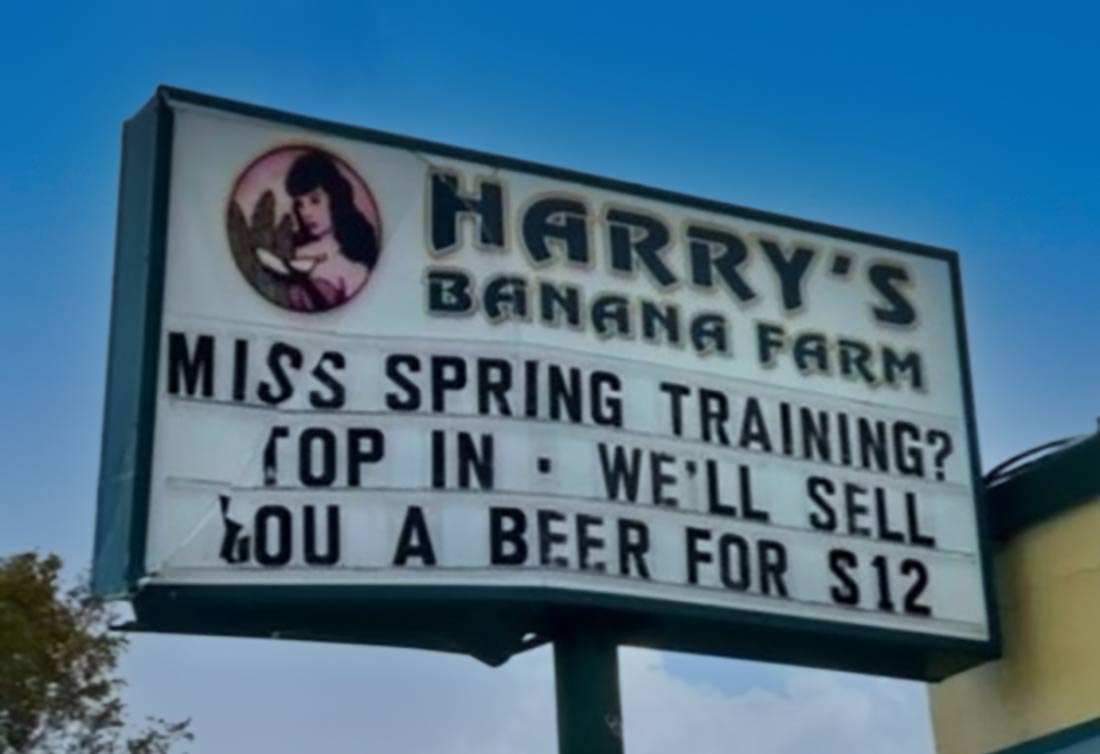 But the start of spring training, which was to begin this past week, is delayed and there may only be a shortened, hurried spring training and that kind of goes against what spring training is all about. It’s a leisurely start to the baseball calendar. And now it is going to be a rush job at some point. Mets fans want to see how Buck Showalter will begin to change the team’s losing culture in his first PSL spring training.

Hall of Famer Brooks Robinson once said of spring training: “This is the best time of year. Heck, once the season starts, I go to work.’’

Then there is this gem from Sandy Koufax, once a frequent visitor to Mets camp. I have had the pleasure of talking to Sandy in Port St. Lucie and in Arizona where the Dodgers train. His insight is invaluable. “People who write about spring training not being necessary,’’ he once declared, “have never tried to throw a baseball.’’

How about this from legendary broadcaster and master salesman Harry Caray: “It’s the fans that need spring training. You gotta get ‘em interested. Wake ‘em up. Let ‘em know that their season is coming, the good times are gonna roll.’’

Which brings us back to our Mets fan in the spotlight, Steven Merrill.

A son and his dad at spring training is a glorious sight.

“It’s the best,’’ Steven said. “You don’t get that experience at training camp in the NFL, you are not getting that with the NHL or the NBA, there is just nothing like it, that vibe and experience, being around baseball and the limitless possibilities that spring training presents day in and day out. It’s like the perfect world. You go down to warm weather, you are watching baseball and people up in Jersey and New York and it’s like 30 degrees and here you are living the dream for a week.’’

Getting back to the point Harry Caray made, about selling baseball, “We go all over the country every year to see games,’’ Steven said. “Last year I went to 32 games. I was in Boston, Baltimore, Philadelphia, every other year we go to D.C. and we hit Pittsburgh and Cincinnati back to back.’’ 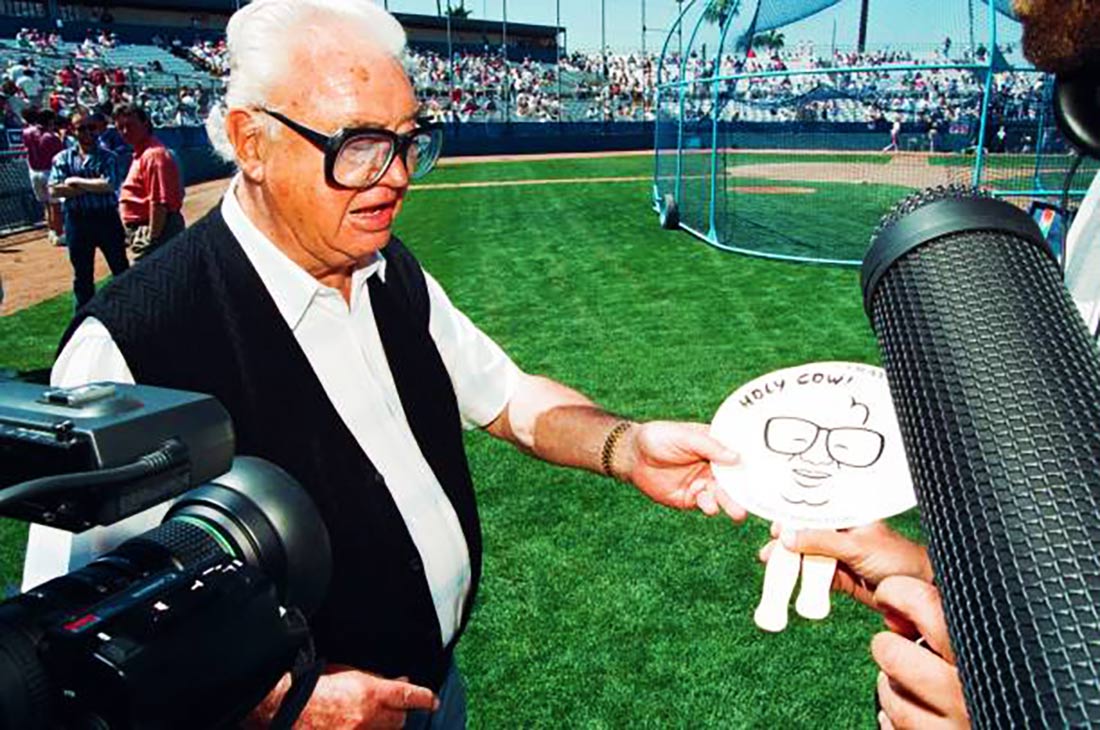 It all starts with spring training. These are the best of fans who truly love the game. In spring training the fans are living the romanticism of the game, something the analytic masters of baseball have no clue about.

Have you ever tried to talk to the Nerds about the romanticism of the game? Totally clueless.

In the announcement that spring training will be delayed, MLB said: “We regret, that without a collective bargaining agreement in place, we must postpone the start of Spring Training games until no earlier than Saturday March 5. All 30 clubs are unified in their strong desire to bring players back to the field and fans back to the stands.’’

They could be on the field this morning, all 30 teams working out, if they were not locked out by the owners, who not only locked out the players but have dragged their feet in negotiations.

With the cancellation of games that were supposed to start on Feb. 26, spring training towns lose money and the workers at these facilities lost money as well as the fan loses a wonderful experience.

Just think of baseball today as a steamroller. In so many ways it flattens the fan and those ballpark workers. Not exactly what James Earl Jones had in mind in his Field of Dreams speech when he said: “America has rolled by like an army of steamrollers, It’s been erased like a blackboard, rebuilt and erased again. But baseball has marked the time.’’

Spring training is the first marker of that time. It gets you in the mood for the season. Hope is all around the ballpark. Even if you are the Orioles fan you have the hope of watching catcher Adley Rutschman. I spoke with a coach this week who worked with Rutschman last season and he emphasized Rutschman is the real deal ­– and not just because of his lofty minor league numbers but because of his approach to the game. 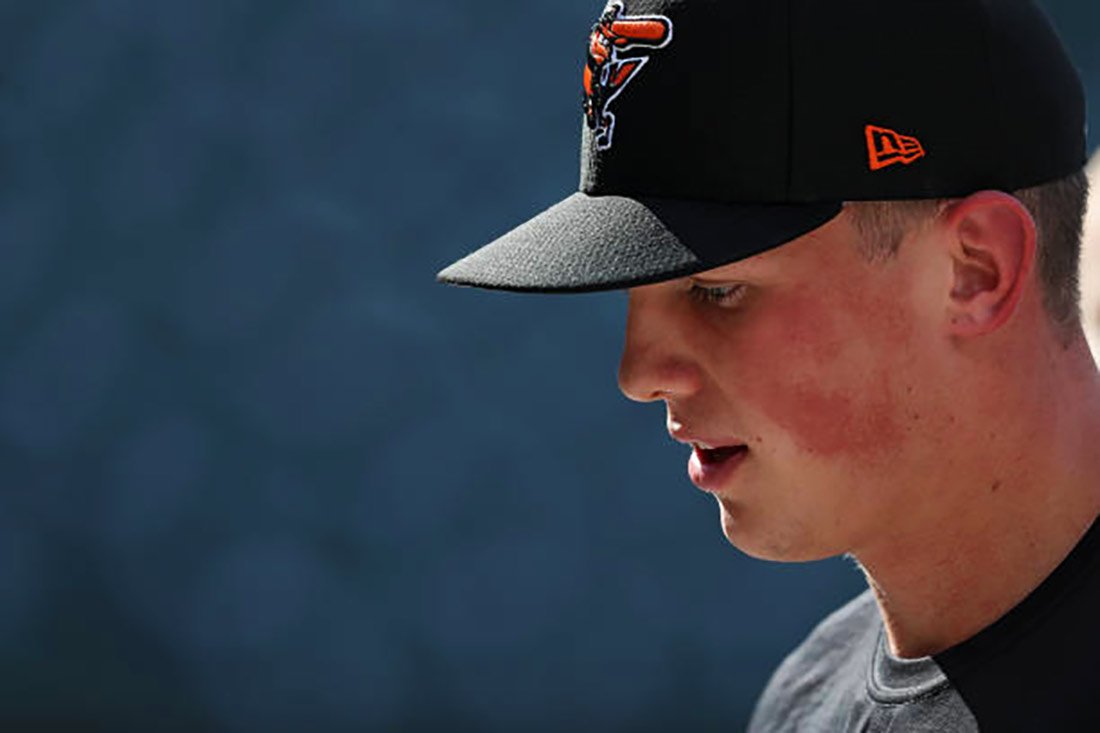 The 2019 top overall pick in the Major League Baseball draft, Adley Rutschman #35 of the Baltimore Orioles looks on before the Orioles play the San Diego Padres at Oriole Park at Camden Yards on June 25, 2019 in Baltimore, Maryland. (Photo by Patrick Smith/Getty Images)

There are some prospects in camp now but anyone on the 40-man roster is locked out by the owners.

And that is Yuma, Arizona, known for the territorial prison. The nightlife wasn’t great but after a long hot day working spring training, a cold beer out of the cooler is all you need. The key was that Yuma’s access to the players for the fans and the media was off the charts. The clubhouse was big so you could have wonderful sit-down conversations with the players and Hall of Famer Tony Gwynn set the tone for the rest of the team by being accessible and kind … and funny with the greatest laugh the game has ever heard.

Also, there was never a traffic jam in Yuma, a town that also has the greatest high school nickname of all in my book: The Criminals. I used to have a shirt with a Tommy Lee Jones looking character peering out from behind prison bars. The school was founded in 1909 and soon moved to the abandoned Yuma Territorial Prison. Hence, they became the Criminals or the Crims. The student store is named “The Cell Block.’’ 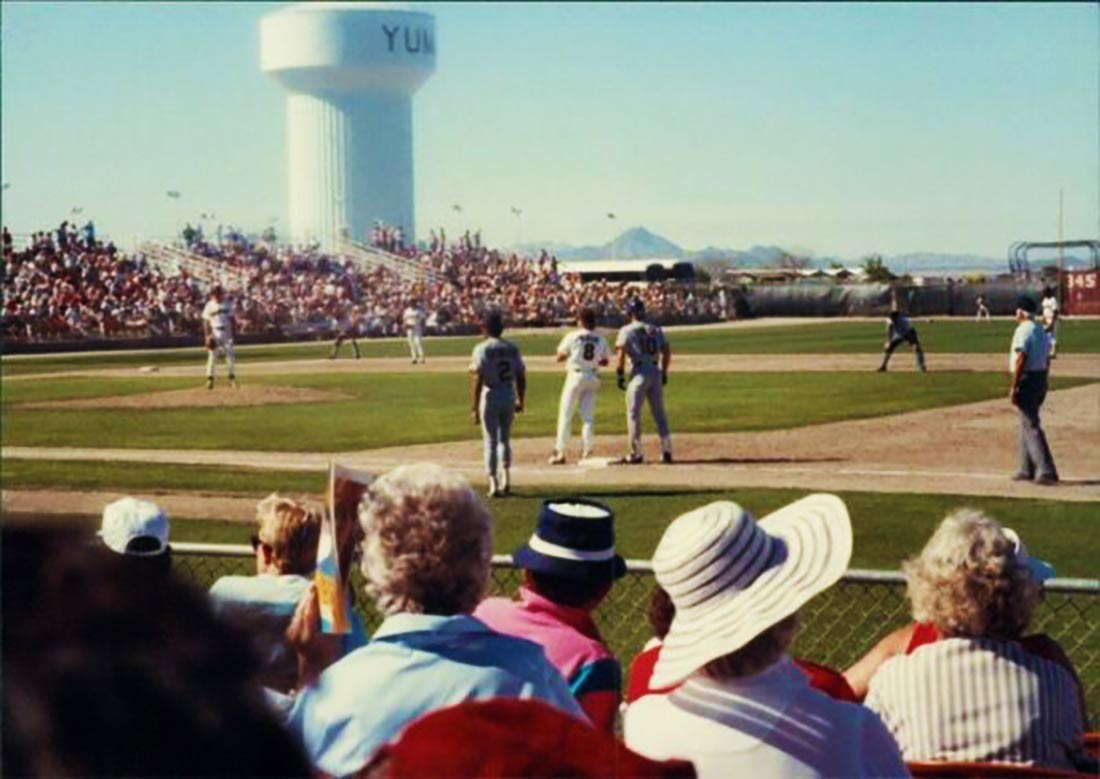 Those Padres played in a delightful little ballpark called Desert Sun Stadium and the press box was right on top of the action as were the fans. I remember first seeing a young second basemen in the back field workouts and was immediately impressed because during infield, yes teams used to take infield, this young player would get grass stains on his uni. His name: Roberto Alomar.

My first year with the Padres the players allowed me to be in the NCAA Pool, another rite of spring, watching March Madness. All this helps bond a team, something else the analytic people don’t understand. As for bonding, I won the tournament that year in 1988. Instant respect from the Padres players.

Spring training is a time for a team to begin to come together. It’s a time to learn more about the game from instructors who really know their stuff and has been passed down through the generations, as long as they are allowed to teach – and that is a big if these days. It’s a time for the fans to enjoy every aspect of the day at the complex.

MLB has locked out its own players and its own fans. How does any of that make sense?

The sound of a fastball popping in the glove or a baseball squarely hitting the bat is missing in Rob Manfred’s Silent Spring.

Consider this from longtime Mets fan Cindy Moskey. “I’ve been taking my kids to Spring Training for 30 years. It was always a special thing to look forward to after winter, a trip to Port St. Lucie was always a highlight,’’ she told me. “So great to get close to the players on the practice fields and at the games. We have a collection of baseballs from spring training. We always went to see our favorite players. Sure hope baseball can reach an agreement. Families look forward to this special time of year.’’

They sure do. Maybe someone can get that message to Manfred and the owners and get them down off that steamroller.

previous article
Eyes to the Past
next article
350-346 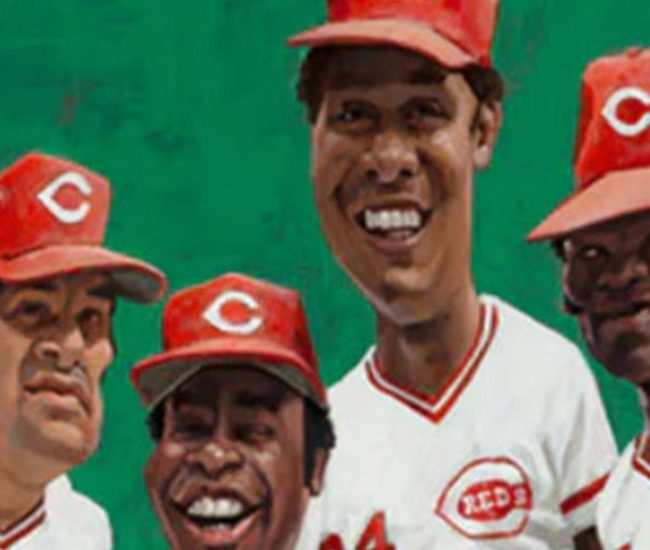 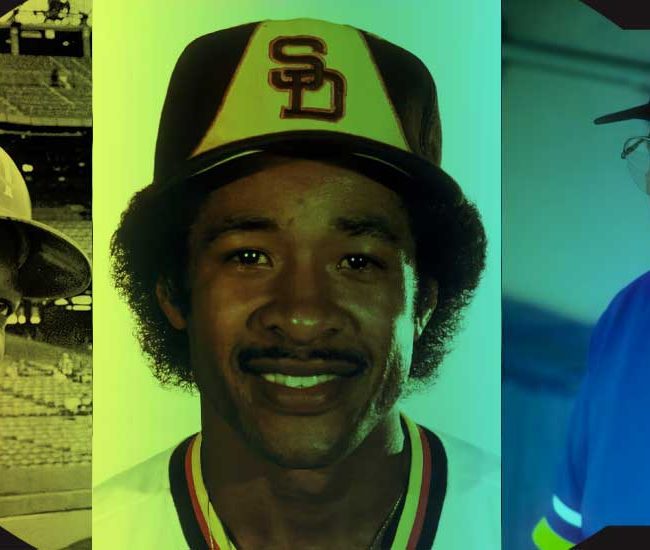