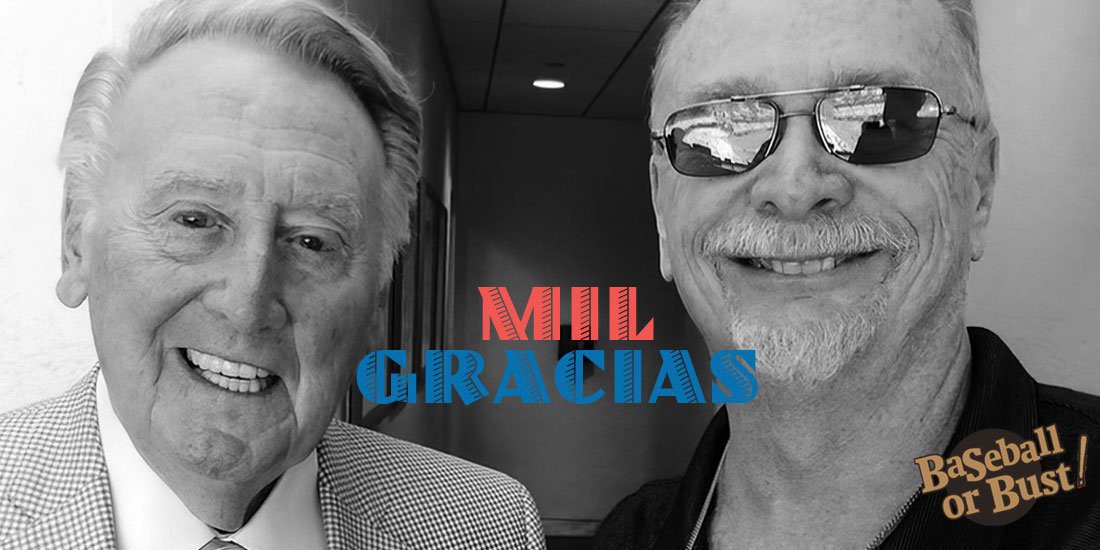 Remember this most about Vin Scully.

He was your friend.

In our last conversation, more than a year ago, Vin Scully offered these wonderful words: “God has been awfully good to me. He allowed me to broadcast 67 years with the Dodgers, that’s unbelievable. So I’m thankful for any opportunity to do anything I can to pay back something to the game, and the people who wrote about it and the people who played it.”

“I’ve certainly had a ball while doing it.’’

Remember that Vin Scully was your baseball friend.

To enter his broadcast booth at Dodgers Stadium was to go on a baseball pilgrimage. You were in the presence of goodness and kindness and no matter how much you loved baseball, he loved it more. He always made you feel good about yourself, not just in broadcasting a baseball game – but in life.

When Vin’s immaculate career was winding down in 2016 I spent time with him in that booth and he talked to me about his life and how he was the one who was thankful for the game and the fans. Here is his key comment from that day, another example of Vin putting words together that should be carved into stone.

“That was his gift. Imagine all the lives he touched in a positive manner.”

“I’ve said many times I should spend more times on my knees than I do,’’ Scully, a devout Catholic, told me. “Because that is all I can think of, it has to be God’s will. I mean to give me a job that I wanted at such a young age and then allowing me to do it for all these years, mil gracias, thank you God.’’

Scully was 88 at the time and thankful every day.

The next day in the Dodgers food room, well before the start of the game, I was getting a glass of iced tea and with the ice noisily tumbling into my glass, I heard a booming voice come through the door saying, “Kevin, Kevin, that was the nicest story anybody ever wrote about me.’’

Vin had read my column and was pleased because a man who worked so well with words was happy to see his words of thankfulness in print.

That was the essence of Vin Scully, who passed away Tuesday night at the age of 94. For 67 years he was allowed to do his job to make friends through spoken words. It was poetry. And he also knew when not to talk in a big moment or in a quiet moment as well.

That was his gift. Imagine all the lives he touched in a positive manner.

Mets broadcaster Howie Rose said it perfectly to me about Vin at the time: “Vin is the greatest friend the game of baseball has ever had. He’s Babe Ruth and the Beatles all rolled into one.’’

Social media was filled Wednesday with memories and pictures of people standing with Vin through the years, all with big smiles. That was another gift Vin Scully gave the world. He always smiled and stood there for the picture. It looked like you were standing with your best baseball friend and when you would show the picture to others, they would smile, too.

Here is what Vin told me about his style of broadcasting: “I very much don’t think I’m broadcasting. I just think I’m talking to friends about the game.’’

And that is exactly what he did. 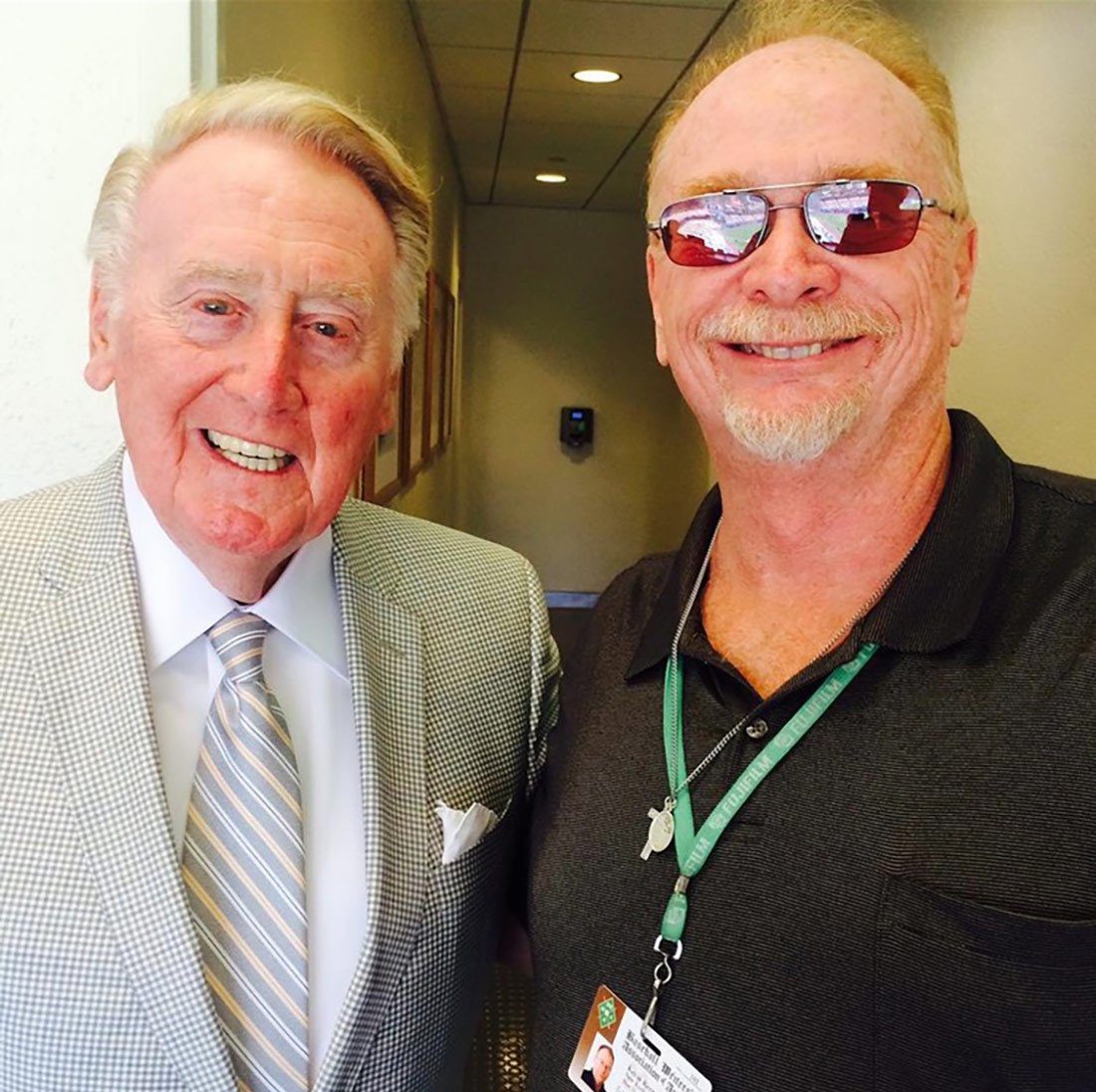 That was Vin Scully. It wasn’t about him, it was about you.

It wasn’t about him, it was about the game.

And we did. It made us forget any troubles we had and that was the same for Vin Scully. His son Michael died in a helicopter crash at the age of 33 in 1994 and Vin credited his Catholic faith and his devotion to the Virgin Mary as helping him get through the tragedy, as he was able to get back in the broadcast booth and continue his life’s work. He was with the Dodgers in Brooklyn and in Los Angeles, driving into Dodger Stadium on Vin Scully Avenue.

Vin Scully pretty much saw it all on the baseball field and described it in perfect fashion. He loved the Dodgers and when the 1955 Dodgers finally beat the Yankees, that was a golden moment for him. He loved Jackie Robinson, Gil Hodges, Pee Wee Reese, and the Boys of Summer and he was able to see Gil finally, and thankfully, this year be elected into the Hall of Fame.

That day when we spoke about Gil on the phone, Vin rattled off all the numbers why Hodges should be in the Hall of Fame and mentioned a four home run game against the Braves, “Against four different pitchers, which made him unusual,’’ he said.

Then he got to Hodges’ defense.

“You had to see him play to realize he was a ballet dancer at first base. It was either Life or Look Magazine that illustrated Gil’s prowess with the glove; they had a series of pictures of (Vaslav) Nijinsky, the famous dancer, in all kinds of remarkable positions and then they had pictures of Gil. It was amazing how Gil was Nijinsky-like at first base.’’

All this poetic history came tumbling out. It was a gift.

“The story of Gil Hodges is a beautiful one,’’ Vin said. “He just taught so much by example. There was something special about Gil. On the ball club I heard players referred to him as a saint. Before Don Newcombe passed away, I remember asking, ‘Tell us the most important thing you remember about Gil.’” 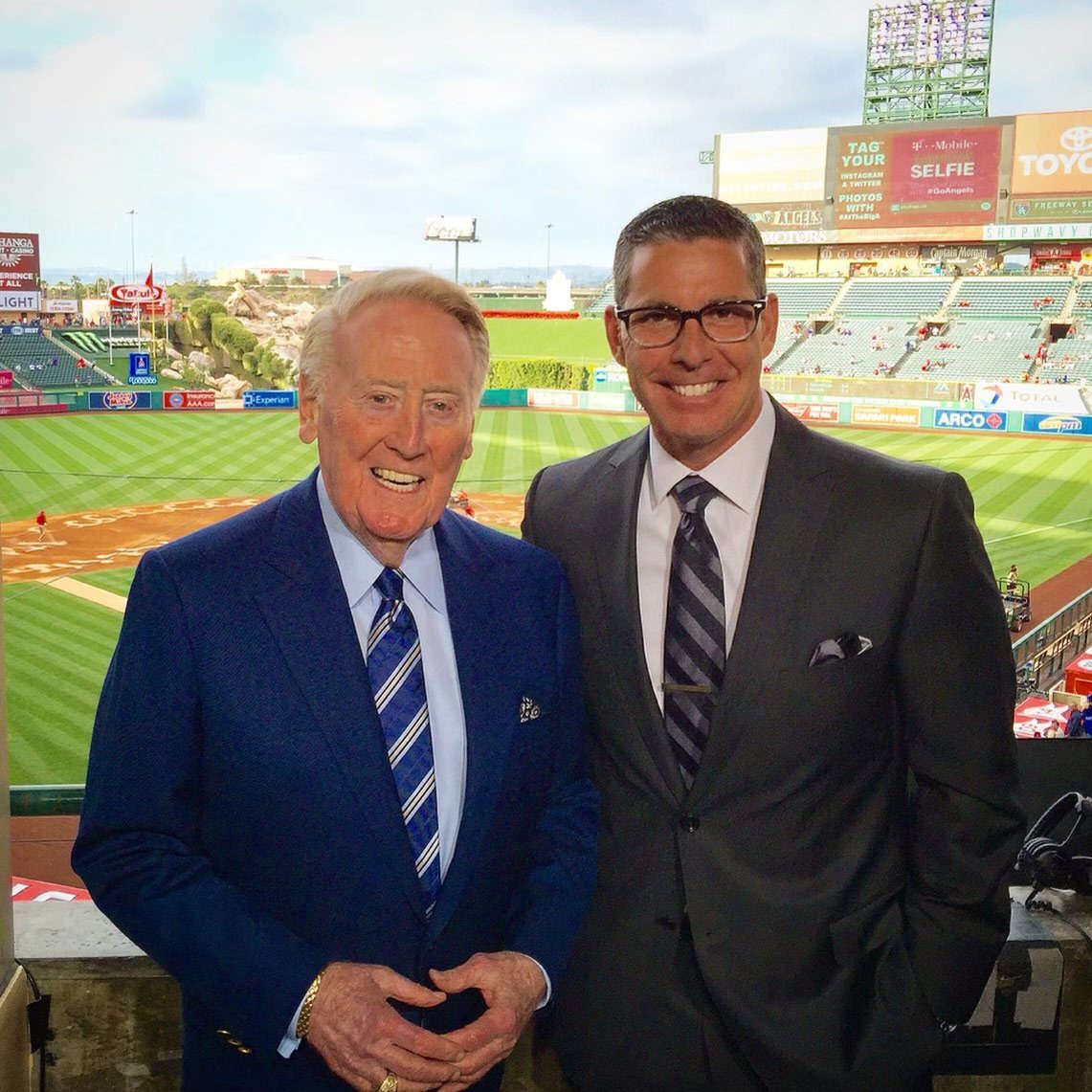 Before the game I went over to the visiting broadcast booth to see Vin and asked if he could come over to the new “Phil Collier Press Room’’ to say a few words about Phil.

Vin was honored. And at the drop of a hat he gave a remarkable speech about Phil Collier. This was some 30 years ago – but I remember Vin making the day so special.

“One of my all-time favorite people,’’ Vin said in our last conversation. “Whatever I said that day came more from my heart than my brain. Phil was a dear, dear pal.’’

Vin then told me a story about Phil’s sense of humor. Scully was announcing both the Game of the Week and the Dodgers at that time and he wound up being in two cities, Chicago and Houston, with extra inning games, three games that produced 46 innings of baseball over a short span of time.

“When the (final) game was over,’’ Scully recalled, “there was a telegram waiting for me in the press room, and when I opened it up it said: ‘Lou Gehrig was a wimp.’ It was signed Phil Collier. I’ll never forget that. He was a dear friend, and thank you for mentioning him because I love to talk about him whenever I have the opportunity.’’

Vin followed that up by telling me how kind the New York writers were to him when he first broke in and that wasn’t always the case in some cities. “They took me under their wing. Dick Young and all of them were all my good pals and I don’t know why that was except I guess I was so young and they all decided to take me under their wing,’’ Vin recalled. “I owe them, those writers back in New York in the ‘50s, tremendous, tremendous. I’ll never forget that.’’ 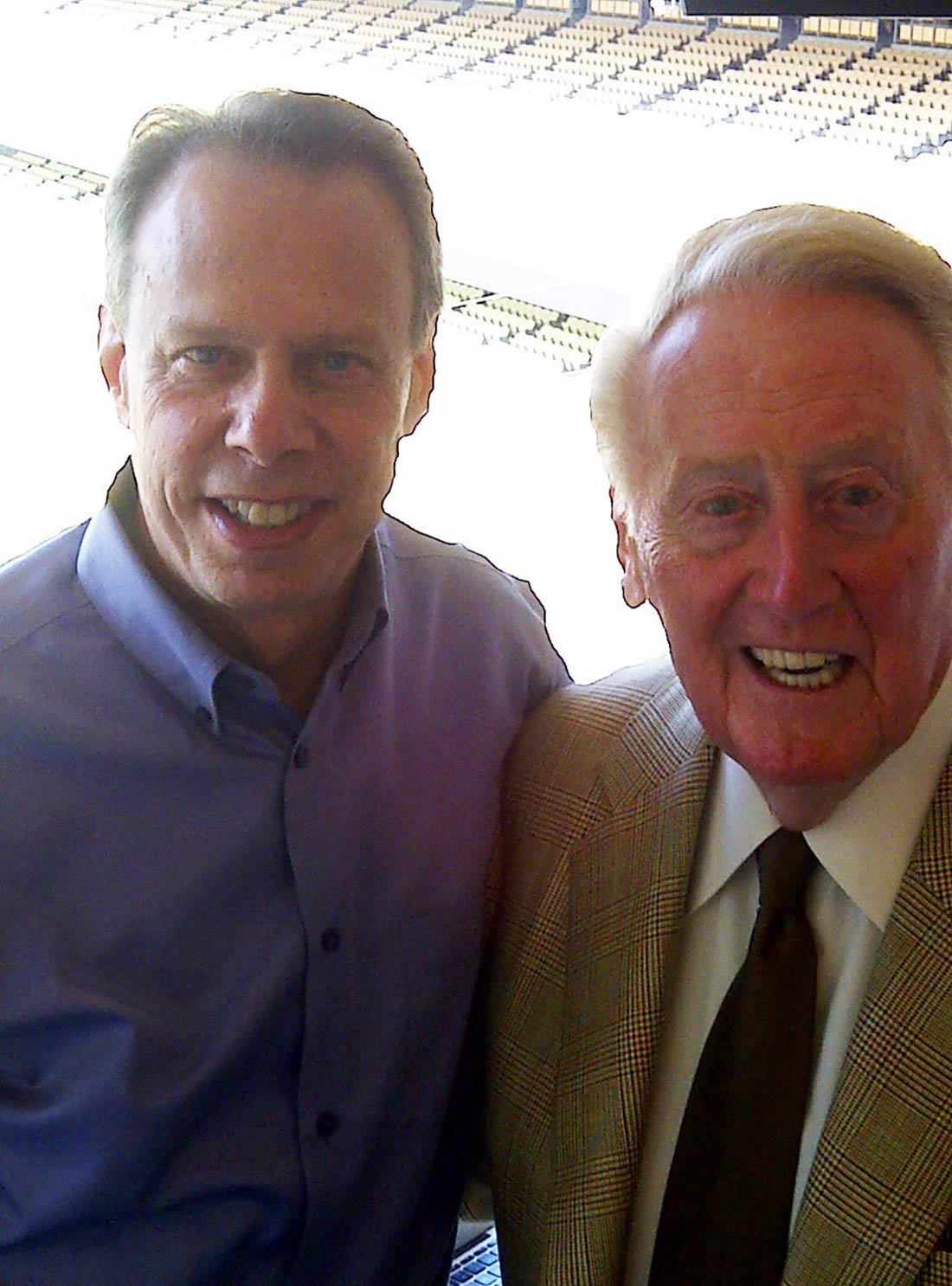 When talking about Hodges and how all of Brooklyn was praying for him during his World Series struggles, Vin said, “Whether it was God’s will or otherwise, it was Gil who drove in the only two runs when the (1955 Brooklyn) Dodgers won their only World Championship in Game 7. It was as if God took his hand to make sure Gil would at least have that moment of glory.’’

Then we talked about character.

“Just to refresh my own memory because I admit, I looked this up,’’ Vin said, “it says, according to the Baseball Hall of Fame, for an inductee, ‘voting shall be based upon the player’s record, playing ability, integrity, sportsmanship, character, and contributions to the team or teams on which the player played.’”

“My gosh. Hodges to me would certainly fulfill that definition.’’

Hall of Fame words coming from the ultimate Hall of Fame broadcaster. What a moment in our talk.

“When you look up that definition of eligibility, numbers should be only part of it, it’s the whole man, the whole character that he leaves behind him, and it’s truly remarkable,’’ Vin Scully said of Gil Hodges.

It is about the whole man, the whole character that a man leaves behind him.

In a most enlightening comment Vin told me when he started in the business with the Brooklyn Dodgers in 1950 this was his goal: “My whole idea, for at least for the first five years of my career, would be like a rookie walking up to home plate saying, ‘Now don’t strike out.’ My whole attitude was ‘Please Vin, don’t screw up.’ ’’

Vin Scully never screwed up. He was remarkable in every way. So many words will be written, deservedly so, about Vin upon his passing; but remember this most of all: Vin Scully was your friend.