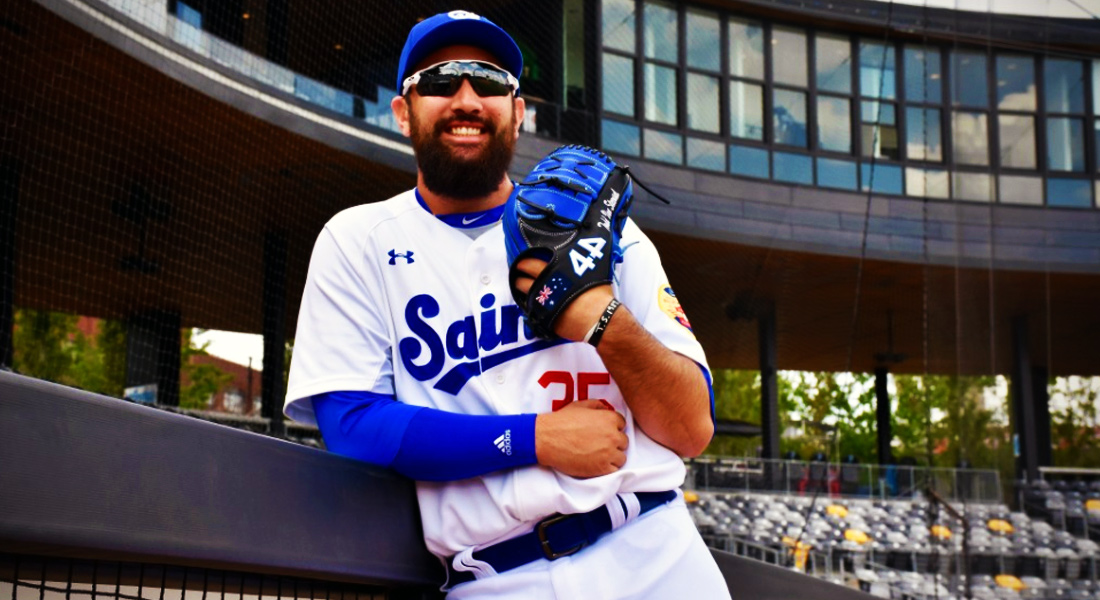 Up In The Air: Todd Van Steensel

Find me a baseball fan who has never heard the term “Journeyman” referring to a pitcher and I’ll say that’s no baseball fan. Whether the term is used to refer to a guy like Edwin Jackson who has pitched for a record 14 Major League franchises or someone such as George Brunet who pitched in parts of 33 consecutive seasons in some form of professional baseball, it more often than not refers to a player who has a lot of mileage under his belt.

In terms of pure mileage, Todd Van Steensel may not be ready to cash in his 1,000,000 frequent flyer miles just yet ala George Clooney in Up in the Air, but I’d venture a guess that he can get an upgrade to first-class damn near any time he wants.

Van Steensel started his career with the Gulf Coast League Phillies in 2009 before returning to Australia to pitch for his hometown Sydney Blue Sox of the ABL in 2010. The following year, Todd was signed by the Minnesota Twins and returned to the States to pitch for the Elizabethton Twins in the Appalachian League.

2012 brought him to the Netherlands where he helped Corendon Kinheim secure the Dutch National League Championship. An injury then sent him back to Australia and then back to the Twins organization in 2014.

You can probably see where I’m going with the frequent flyer miles thing now.

If you’re dizzied by all of this, then imagine how Todd must feel.

On top of all this, Van Steensel was a member of the Australian National Team, most notably pitching for Team Australia in the 2017 World Baseball Classic about which he says, “It’s honestly the greatest and most humbling feeling playing for Australia. For the most part when you play baseball you’re playing for the name on the front of the jersey, but when you represent your country, you’re representing an entire nation and you take that responsibility to heart.

The Australian team has a 35-man squad, and the players generally get selected for each Australian team from that. Coaches and selectors follow your progress throughout the year in the ABL, and you’re chosen on things like track record as well as recent form.” He spoke further about the luxuries of playing in the WBC in Japan adding, “I tell people if I never get to the big leagues, at least I know what it’s like for two weeks in the WBC. We had our own rooms, we didn’t carry any of our bags anywhere. Whenever we asked for or needed help with something the answer was always yes. And the food was phenomenal. I’m pretty easy when it comes to food too, so I tried it all”. 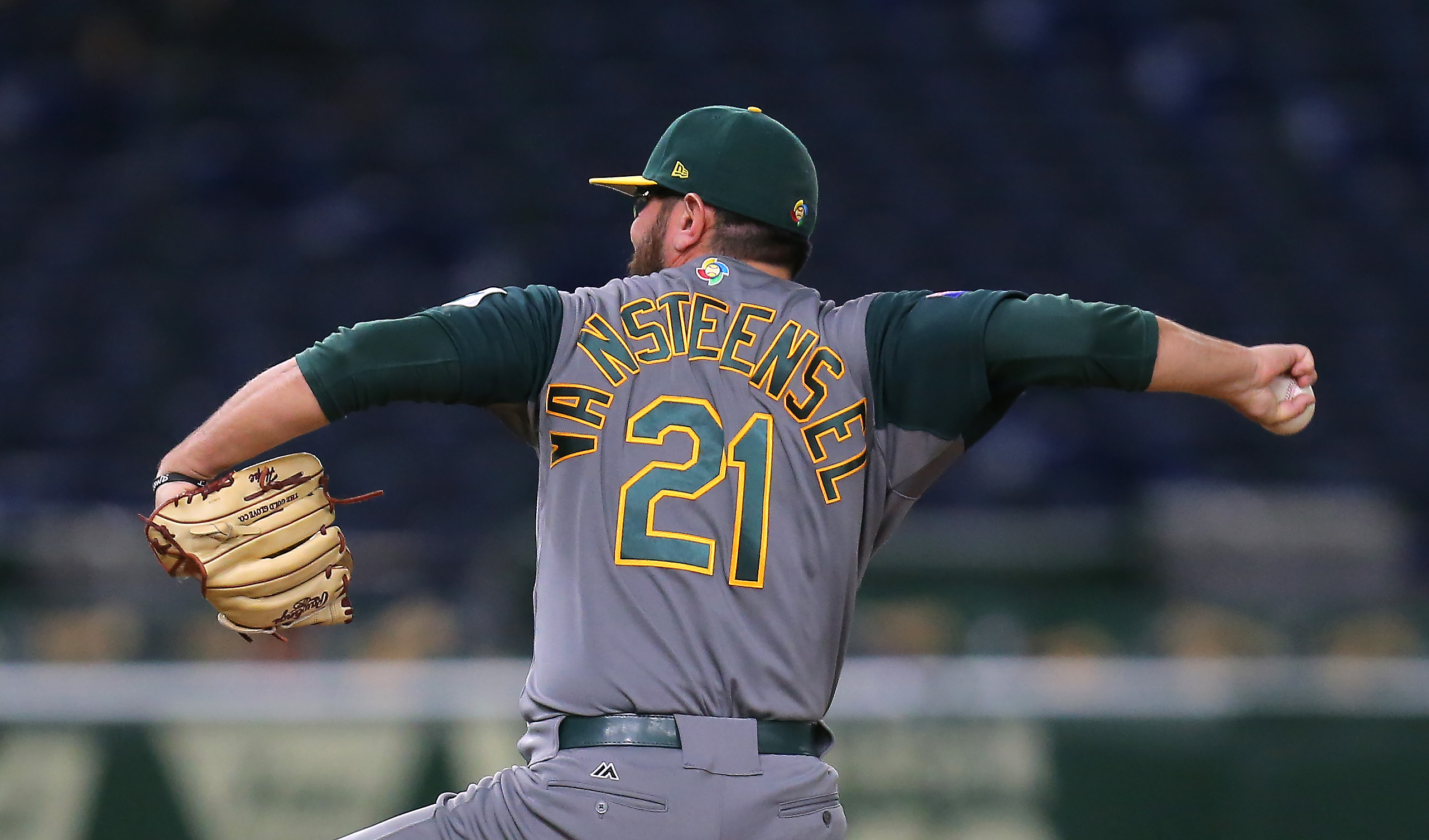 Van Steensel letting one fly pitching for Team Australia in the WBC.

I had always assumed that playing games in enclosed stadiums (as the Japanese WBC games all were) might be a strange experience or could possibly throw off a player’s game if they weren’t used to playing indoors, but that was evidently not the case here.

“To be honest, it wasn’t that strange at all. It just feels like a night game all the time – which I love – and the temperature is always perfect. As far as playing in front of a Japanese crowd that’s unlike anything I’ve ever experienced in baseball. When they’re at bat each guy in the lineup has his own chant the fans sing, and when they’re pitching it’s almost dead silent. It’s an amazing atmosphere they create.”

When asked if he hopes to once again represent his home country when baseball makes its return during the upcoming Summer Olympics, he stated, “I’m hoping I make the team for the qualifying process. They have a lot of really good pitchers to choose from, and I just hope I’ve done enough as a member of the national team for the last nine years to hold onto a spot. Before I had any Major League aspirations, I dreamt of playing for Australia at the Olympics, so to be on the Australian team that qualifies for the Olympics and to be able to attend would be a dream come true. And most likely the perfect end to a career.”

Now if you think that a guy who has played in so many cities all over the world (while amassing one Indy Ball and two Minor League championships along the way) has probably had his share of funky moments over the years, all I can say is “you bet your arse he has”. 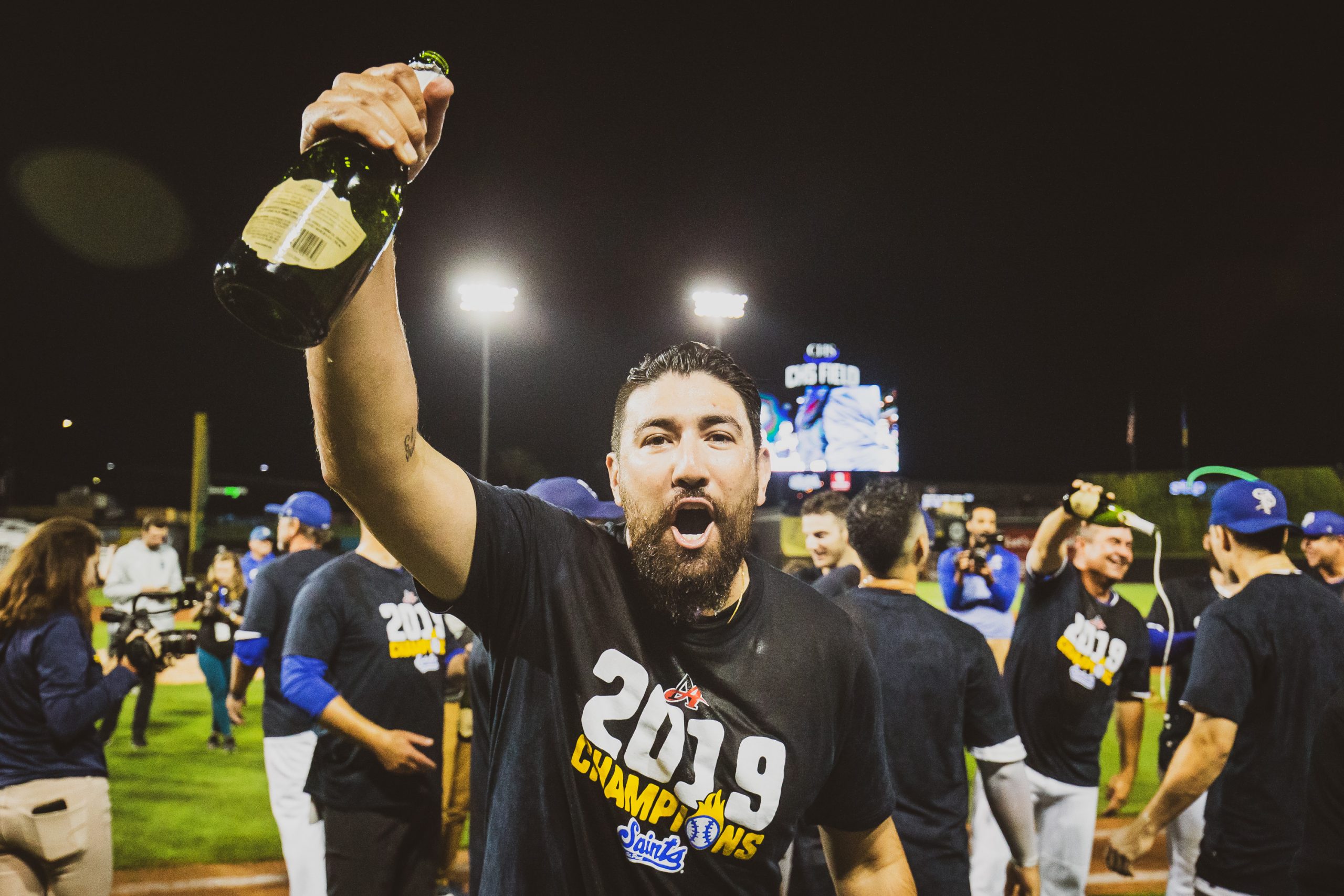 Recounting an 8th inning incident one night in Chattanooga that Van Steensel and his bullpen mates were lucky enough to experience, he noted, “So, our bullpen overlooks the hill and it’s a steep hill. No clear space back there at all. We hear leaves rustling back there and think nothing of it. The rustling gets louder so we go to the fence to investigate… we walk over and can’t see anything, so Teammate One climbs up the fence to peek over. He sees a leg creep out of the bushes and then a human head popped up! There was a dude back there just hanging out. He looked fairly messed up, possibly drugged or drunk. Not in a good way at all. As soon as the few guys by the fence saw that it was a person, they just ran away from it as fast as they could. Didn’t know what this guy could have had on him. He’s standing there and we walk over to talk to him, and he says ‘I’m sorry, I ran up the hill, I was at this place with lots of people. I was being chased – I feared for my life’. 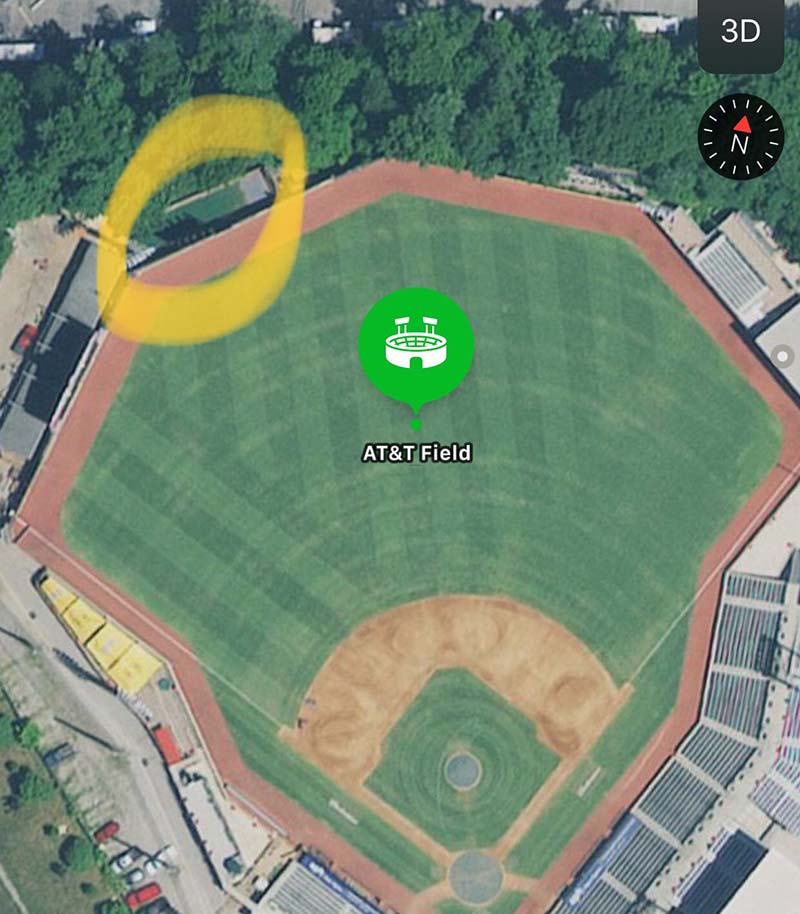 The Hill, as mapped out by Todd Van Steensel.

“He looked like someone from The Hills Have Eyes. It was nuts. We had a shovel someone was holding onto just in case he tried to jump the fence into the bullpen. We were prepared to run out on to the field during the game if he came over. Our heads were on a swivel. Every rustling sound we heard we were alert to. After a few minutes the rustling died down, the game ended, and we got the hell out of there. Just another fun day living the dream in Chattanooga!”

On another night in 2015 in Ft. Myers, FL while playing the Daytona Tortugas (a Cincinnati Reds affiliate), a bit of a melee ensued after a little “they did this to us, we did that to them” business was afoot.

“They eventually hit our guy and we hadn’t hit any of their guys… yet. The opportunity came up a few times to get them and have our teammates’ backs, but it just didn’t happen. So of course, I’m on the mound in the ninth inning of game four of the series and well… the guy we wanted to hit who was the cause of the trouble is up second in the inning. We had a four-run lead, so it was the perfect situation. I get the first guy out, and then, well…

Pretty sure our entire team was ready for something to go down. I know for sure our bullpen was ready for something messy to happen. So, I did what had to be done. Didn’t try and kill the guy. Just send the message like, you know… don’t mess with my dudes. He called me some name, I told him to get up the line. And while that’s all happening their dugout is yelling at me. In my head I was like, well we’ve come this far we may as well clear benches.

This is how it happened. 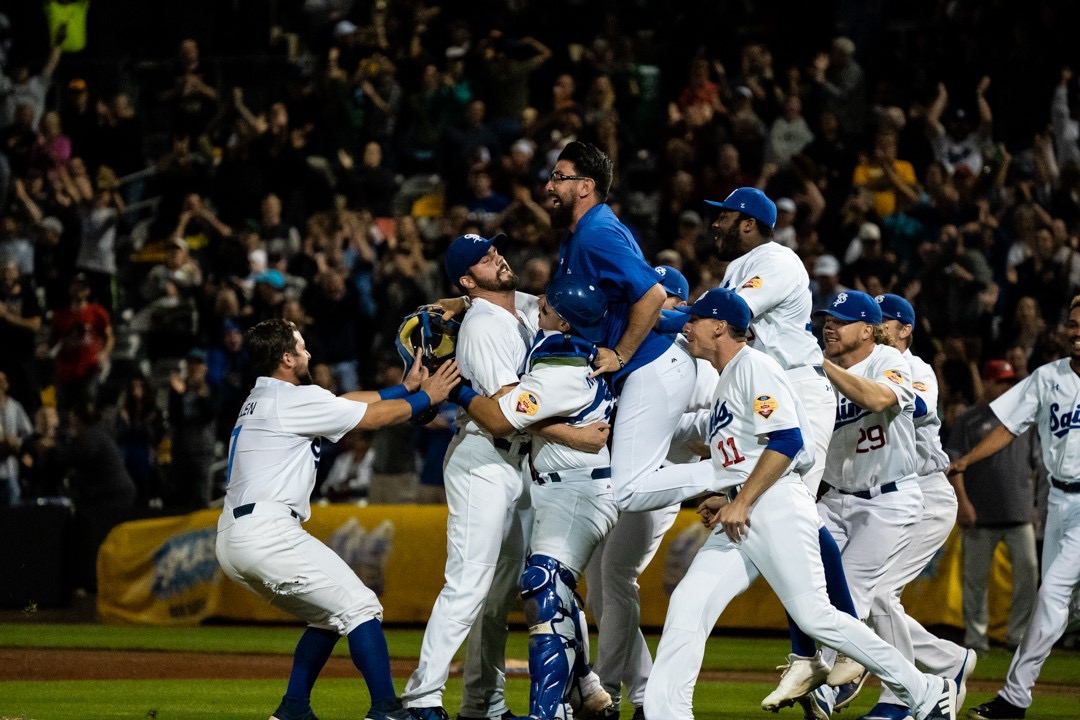 Then one big dude who I would never want to mess with yells, ‘You bitch ass pu**y mother—ker’

I listed all my courage and yell back “’Let’s f–king go, c–t’

So, calling someone in the US the C-word is apparently really bad, yes? Well this is when I saw my life flash before my eyes. The big dude jumps the dugout and heads straight for me’”

“I’m like, I can’t back down and was 100% ready to get beat up, but I wasn’t backing down. I slowly walked off the mound hoping someone on my team saved my life and wouldn’t you know – my favorite catcher Michael Quesada was there to save the day.

So we had our little fun, we pushed and shoved, guys got amongst the action. It was a good team bonding experience. Funny thing is, I didn’t get ejected. The guy who jumped the fence (Garrett) and the on-deck batter did. I got to close out the game and complete the sweep.” 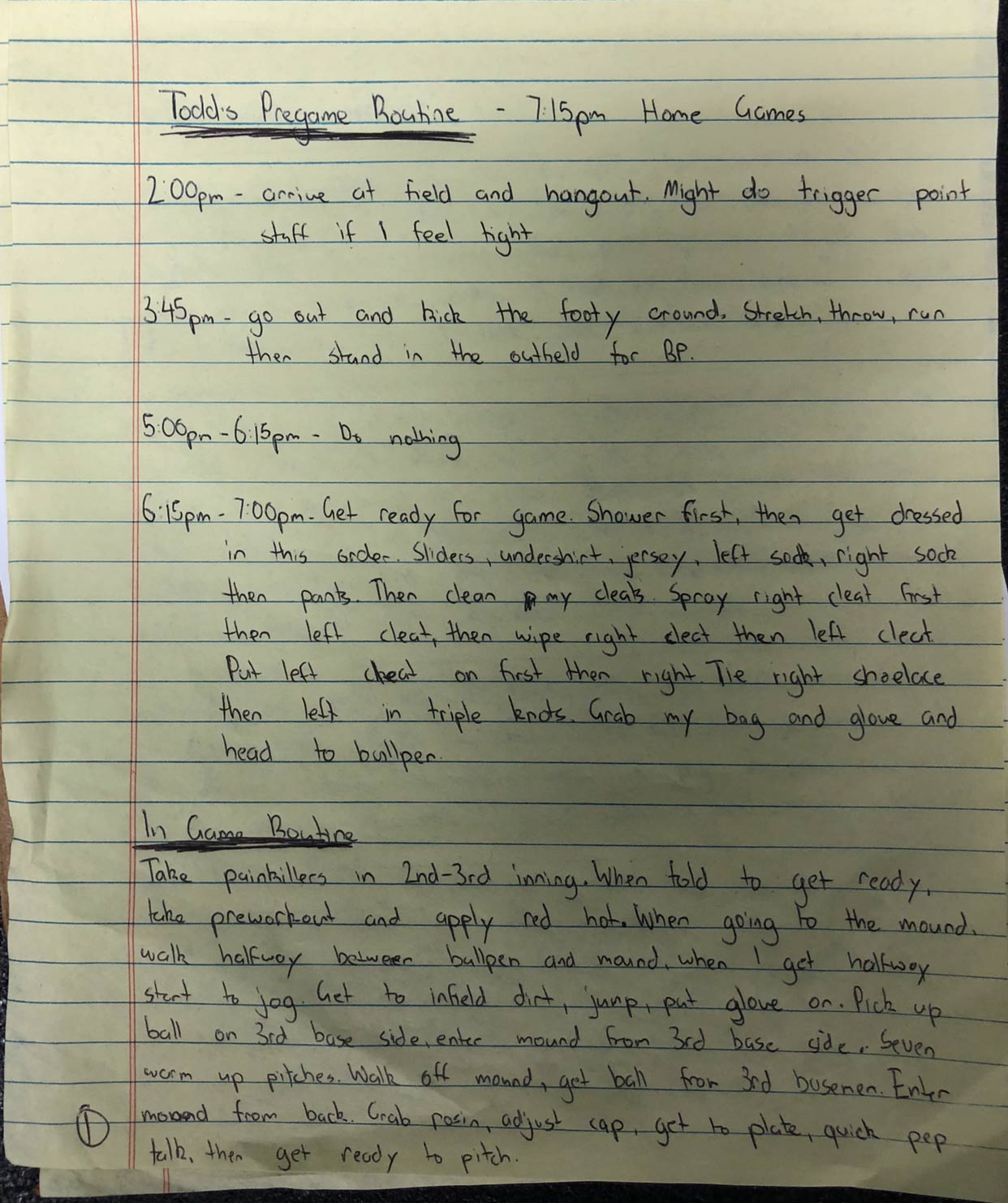 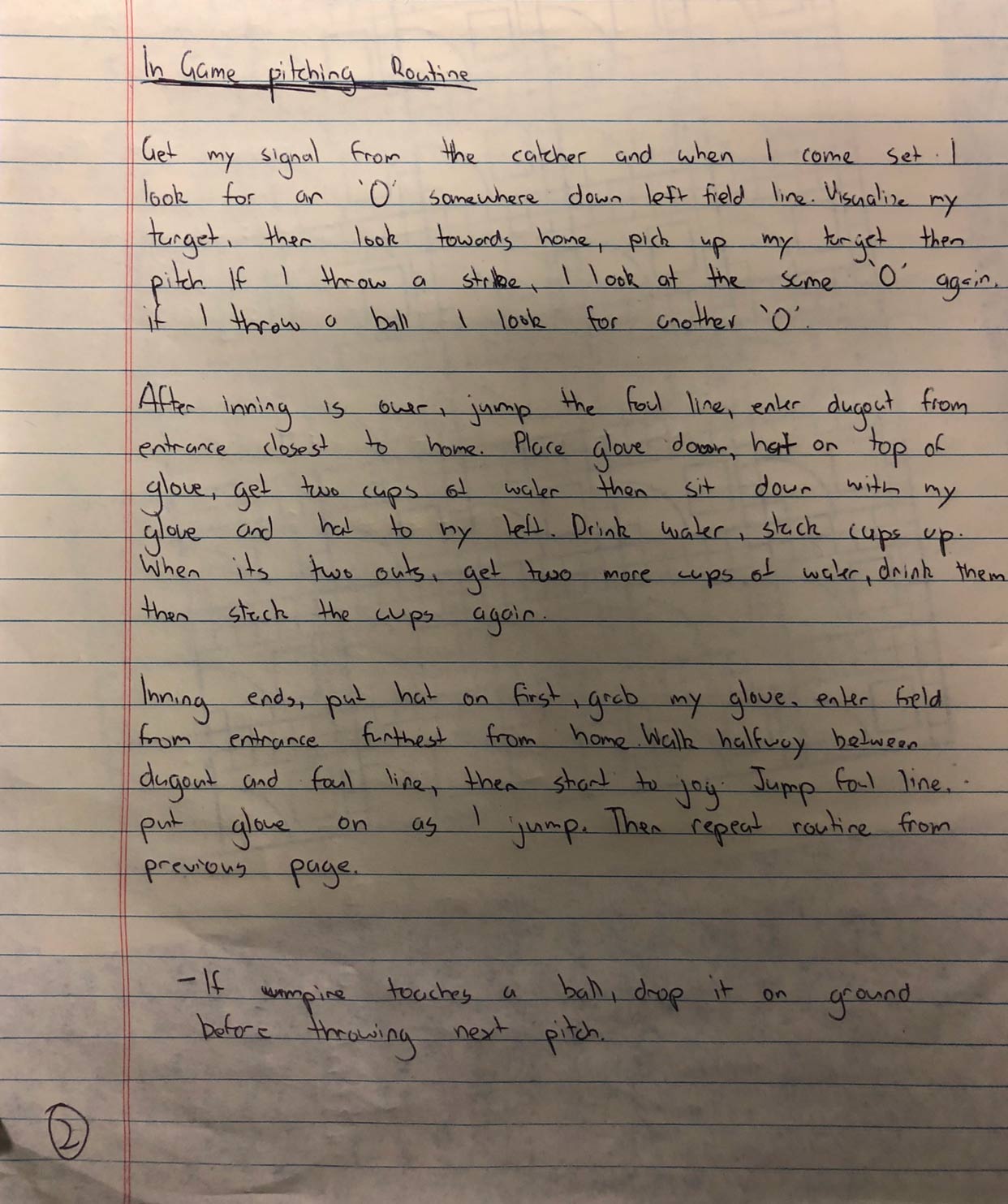 The most amazing routine you'll ever see. 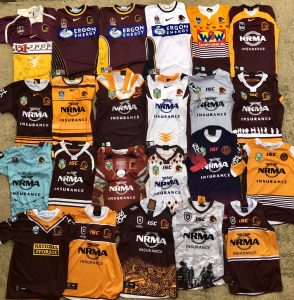 Like any player, Van Steensel is a creature of routine. So much so that one of his pitching coaches had him write down every step of his gameday routine to hopefully share Todd’s success on the mound amongst his teammates. My personal favorite tidbit is the final one, which states “If umpire touches a ball, drop it on ground before throwing next pitch”.

He’s a consummate professional who enjoys Taylor Swift and also loves his footy, a long-time Brisbane Broncos fan. “In the US I would wake up at 5:00 AM on the weekends to watch them play and if they won that day, I’d wear my Broncos jersey to the field.” His teammates eventually learned to give him some space on those match days where he arrived at the park without one of his countless jerseys.

“I love playing baseball, but If I could I would have loved to be able to play Rugby League. I was just never strong enough, fast enough or tough enough to play, and I accept that” Van Steensel said. 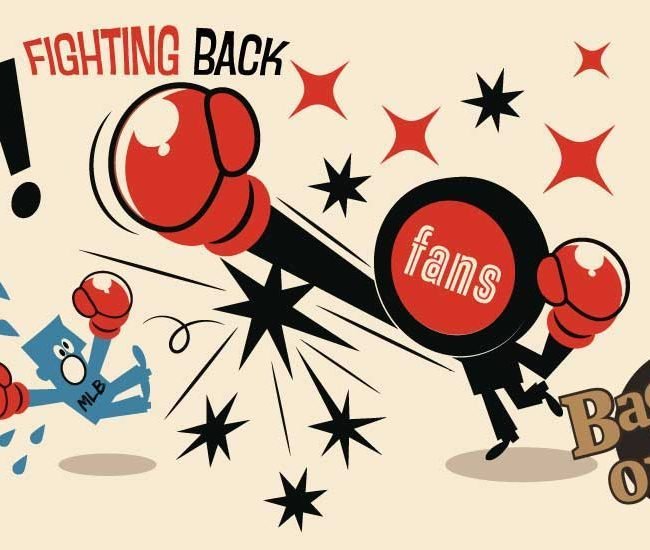 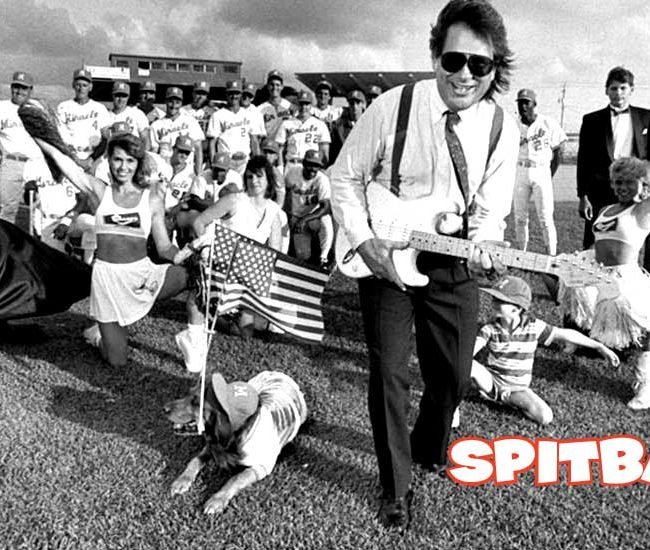