Liotta, who died Wednesday at the age of 67, brought dignity to the role of Shoeless Joe Jackson in the 1989 film classic “Field of Dreams.’’ He also introduced Shoeless Joe’s talents and passion for the art of the game to a whole new generation of baseball fans.

In a sense, Shoeless Joe Jackson was reborn because of the work of Ray Liotta.

Liotta’s greatest role was playing gangster Henry Hill in the 1990 Martin Scorsese mob masterpiece “Goodfellas;’’ but for me, it was his portrayal of Shoeless Joe that I will remember as pure film magic.

Here at BallNine we go deep, especially in “The Story,” and so I reached out this week to Dan Wallach – who in my opinion, is the foremost expert on Shoeless Joe Jackson –  to get his view of what Liotta brought to the role and the impact he had on Jackson’s reputation.

Jackson was banned from baseball for his role in the 1919 Black Sox scandal in the World Series loss to the Reds, a World Series in which he managed to hit .375 over the course of the eight games. (In 1919, the World Series was a best of nine, not seven, in order to grow interest in the game. Remember we are called BallNINE for a reason) Over his 13-year career Jackson batted .356, the third best career average in the history of major league baseball, trailing only Ty Cobb (.366) and Rogers Hornsby (.364).

“Not invited. What do you mean not invited? That’s my corn out there. You guys are guests in my corn.”

What exactly did Liotta bring to that role?

“When you look at the way he was able to portray Joe it made him seem like he was a young, athletic person in his prime again,’’ Wallach told BallNine.

We saw that Joe Jackson on the screen, not the Joe Jackson who was banned from baseball. Shoeless Joe was back on the field again loving baseball, this time in a lovely little Iowa baseball field that was once a measly litle cornfield. Liotta brought a seriousness to the role that helped Kevin Costner, as farmer Ray Kinsella, to ease his pain and to re-unite with his dad, played by Dwier Brown.

At the end of the movie, there is no catch between father and son without Shoeless Joe.

Wallach, the former executive director of the Shoeless Joe Museum in Greenville, S.C., noted: “One of the things that stands out to so many people when they look at pictures of old baseball players, they look at guys like Honus Wagner, Ty Cobb, and Joe Jackson when they are in their careers and so many people will say, ‘Man, he looks like he’s 59 years old.’ People aged differently back then. Some of the pictures that we have of Joe – we made a decision not to put them on display in the museum because we are trying to portray him in a positive light.’’

Liotta made Jackson vibrant again. He brought him to life. The way he moved around the outfield was effortless, making smooth catches with that old glove and wearing those heavy wool uniforms of the day. Joe’s magnetic focus was on the game. Liotta, as Jackson, came out of the cornfield moving like a panther in the outfield.

And, of course, there was that great scene in the movie where Jackson came to the plate for batting practice against the farmer turned baseball field builder.

“Not if you get it near the plate we don’t,’’ Jackson answered. 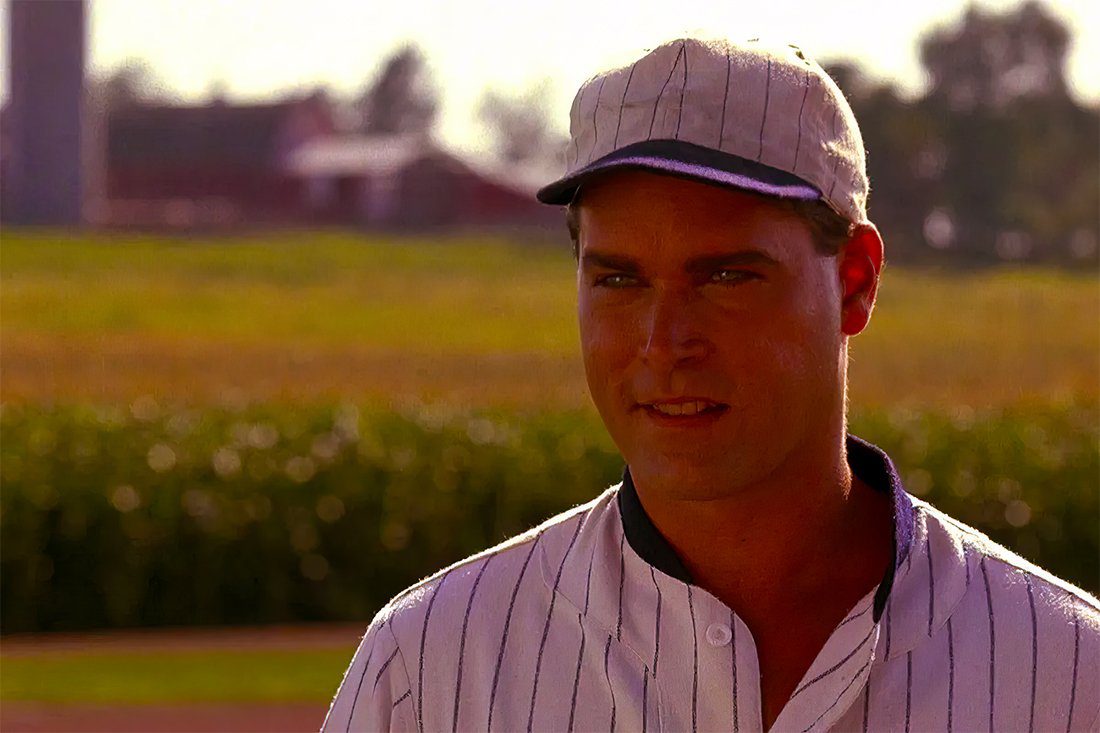 Being around major leaguers throughout my career, that was the perfect response.

Wallach agreed: “That is what Joe Jackson would have said in a situation like that.’’

That was the Joe Jackson that hit .408 for Cleveland in 1911 with a .468 on base percentage. Liotta brought to life the hitter that was Joe Jackson even though in the movie Liotta batted right-handed, not lefty like Joe. And when Liotta lined one back up the middle, sending Costner flying, that made the scene even more real.

Then when Kinsella  throws another pitch low in the strike zone and Jackson parks it into the cornfield, Kinsella says: “Right, you are a low-ball hitter.’’

That’s the image we all want of Jackson, the confident hitter in his prime, not the old black and white photograph that we’ve gotten used to seeing.

“I’ve seen pictures when he’s 27 years old playing for the Cleveland Naps and he looks like he‘s 55,’’ Wallach said. “So, you get a guy like Ray Liotta, who, at this point in his life is just a young, charismatic, good-looking guy, he has this stoicism about him in the movie. He has that little mischievous kind of kick to him as well. Knowing what I’ve learned over the years of research about Joe and what his actual personality was like, I think Ray Liotta got it probably closer than even he knew that he was getting it when he was playing Joe.’’

That is quite the tribute to Ray Liotta’s acting skills and his intensity of work.

Liotta made us believe that was Joe Jackson coming out of that cornfield and for all the other talented actors in the movie like Costner, James Earl Jones, Amy Madigan, Burt Lancaster, Dwier Brown, Gabby Hoffman, Timothy Busfield, Frank Whaley, Anne Seymour, and Ed Harris as “The Voice,” it was Liotta who made all those ghosts come to life – and that is why, to this day, “Field of Dreams’’ is not only my favorite baseball movie, it is one of my favorite movies of all time.

Essentially, it is a baseball version of Frank Capra’s “It’s a Wonderful Life.’’

And that is the ultimate tribute to Ray Liotta.

“Obviously a lot of people point to the fact that he wasn’t batting the right way or throwing with the right hand, but that story has been told over and over,’’ Wallach said. “They just found out too late in the process that he did not know how to bat left-handed.’’

The central theme of “Field of Dreams’’ is that of a son reconnecting with his father and it was Liotta as Joe Jackson who made all of that possible. It’s a movie of fathers and sons, much like baseball is a game of fathers and sons and also, as Costner shows in the movie, fathers and daughters. 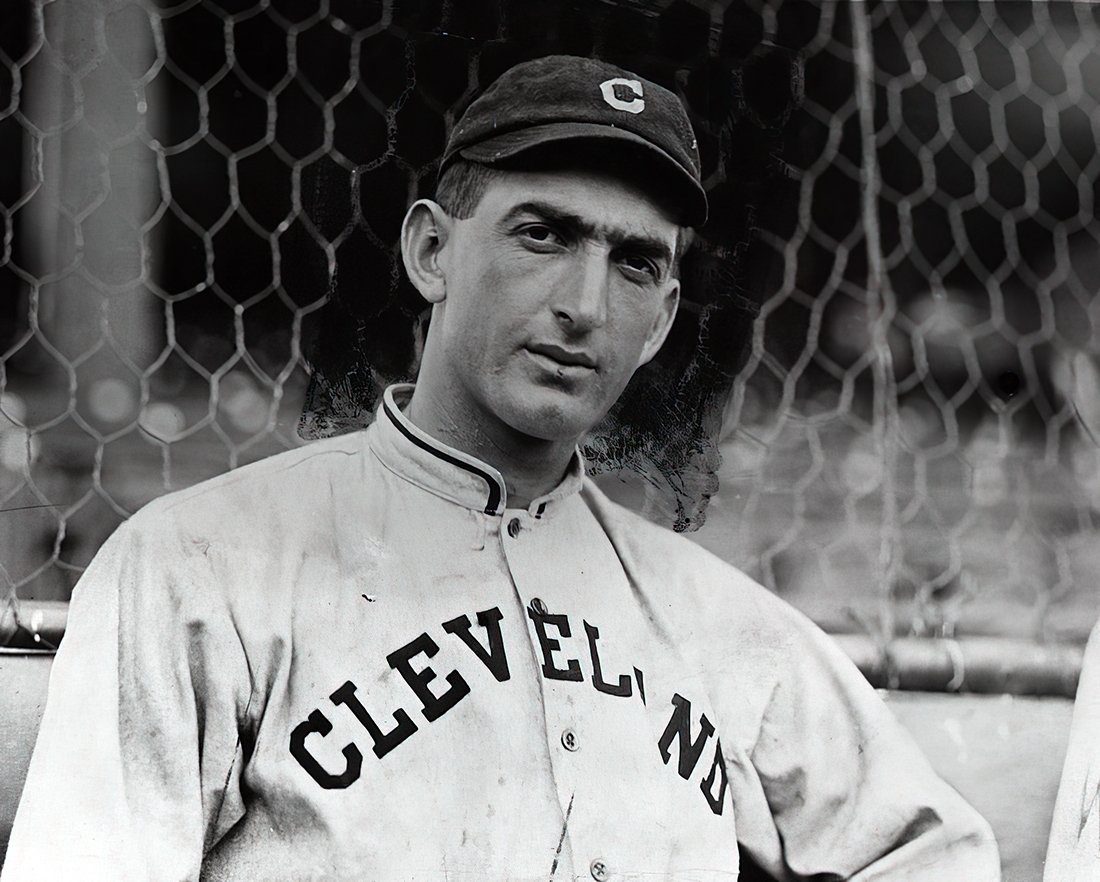 Joe Jackson when he played for the Cleveland Indians. 'Shoeless'Joe Jackson and seven of his Chicago White Sox teammates were implicated in fixing the 1919 World Series and letting the Cincinnati Reds win. Jackson had a .375 in the series, 12 hits, no errors and hit the lone home run for the White Sox. The eight players were banned from baseball for life by Commissioner Kennesaw Mountain Landis. 'Shoeless Joe' died on 12/5/1951 just 10 days before he was scheduled to appear on Ed Sullivan's ``Talk of the Town: in an effort to clear his name. (Photo by Sporting News via Getty Images/Sporting News via Getty Images via Getty Images)

I remember interviewing the director of “Field of Dreams,’’ Phil Alden Robinson, back when the movie celebrated its 15th anniversary and he told me that people were always coming up to him telling him stories about what the movie meant to them. The movie touched them in such a personal way because it was about fathers and sons and baseball.

One man told Robinson how when the movie first came out he wanted to see it with his dad but his father passed away. The man went to the theater, purchased an extra ticket, watched the movie and then went to the funeral home and placed the ticket in his father’s pocket.

Johnny Bench, who grew up in Oklahoma, said watching “Field of Dreams’’ was like “reliving my entire life. I lived in a town of 250 people. In the back of the house was the cornfield. My dad hit a ball in the cornfield we still haven’t found to this day.’’

When Bench was inducted into the Hall of Fame in 1989, the year the movie came out, “I told people it was my dad going into the Hall.’’

That is the power of baseball.

Robinson, the film’s director, was first a Brooklyn Dodgers fan but then switched to the Mets. You could tell from the way the film was made that it was a baseball fan directing the film, and the casting was superb.

They got it right in every way.

“There also was the mentoring aspect of Joe Jackson that Liotta got right,’’ Wallach said. “When Moonlight Graham first arrived to play, he wasn’t Moonlight yet, he was Archie, and he goes over to the backstop to ask for Joe’s advice.”

“What’s the count, 3-1, the first two were up and in, so where’s the next one going to be?’’ said Wallach of the scene. “That’s how Joe thought about the game.’’

At the end of the movie, Jackson tells Kinsella he can’t go into the cornfield.

“But you’re not invited,’’ Jackson answers, matter of factly. 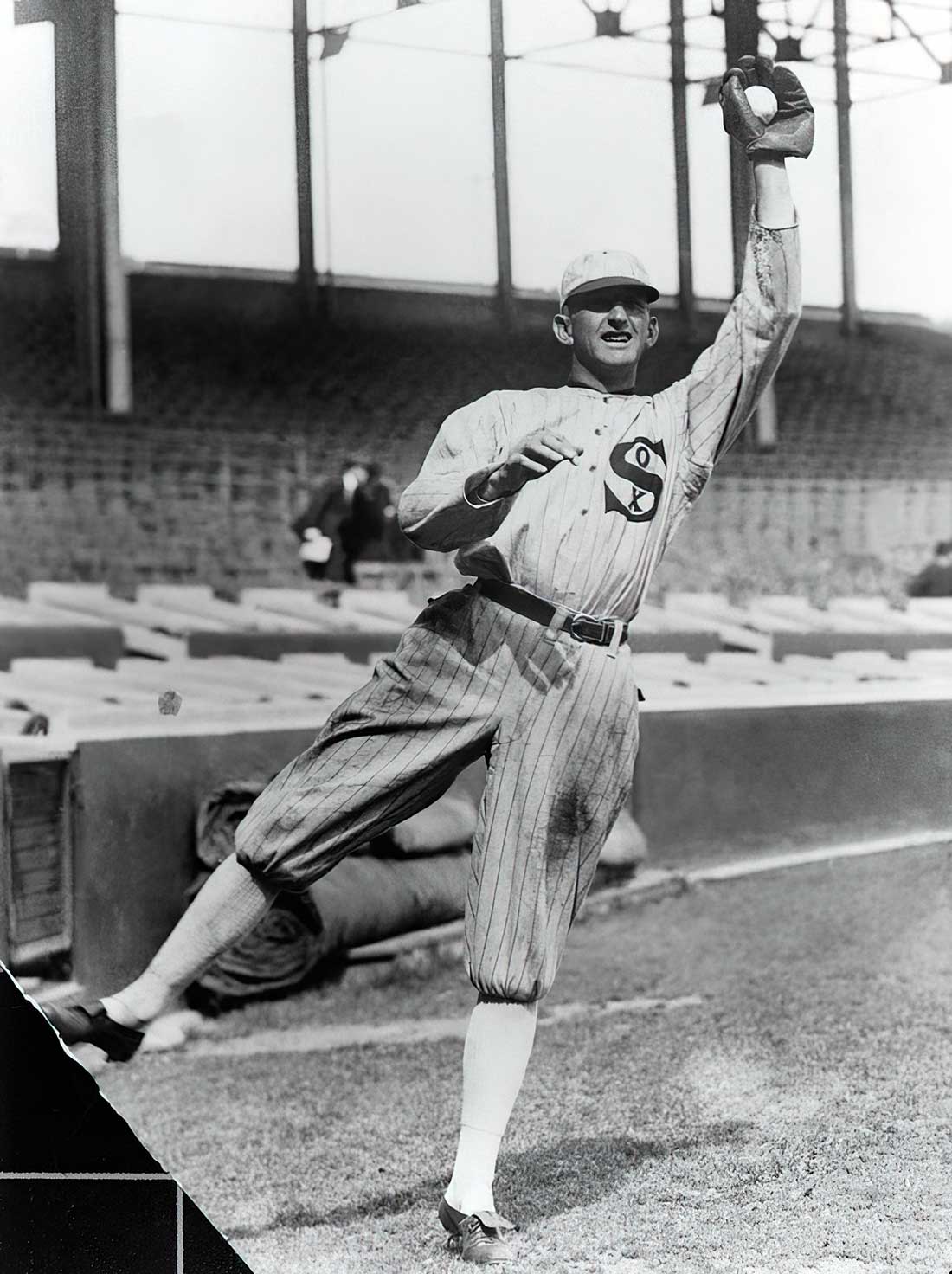 We soon find out what’s in it for Ray Kinsella.

Ray stays and has a catch with his dad. His pain is eased.

Liotta, a young actor in only his third movie, made all that possible by his in-depth portrayal of Shoeless Joe Jackson.

“There is the true joy that Joe had for the game,’’ Wallach said of Jackson. “That was a pretty cool portrayal and an interesting way for so many people to be introduced to the story of Joe Jackson. It was from that point on that Joe was reintroduced into the public consciousness. That’s 1989. “Eight Men Out’’ came out the year before so he was already on the tips of people’s tongues again; but since 1919 and 1921 when they were banned, it had been almost 70 years since people had thought about Joe Jackson.’’

And it was Ray Liotta who painted the new Joe Jackson picture.

“Now with Major League Baseball and FOX having this deal to have a major league sanctioned game at the movie site every year, it’s only going to become more and more a public showing of their respect for how great Joe’s legacy should be treated.’’

The last thing to be done is to get Joe Jackson, who died in 1951, into the Hall of Fame.

“I don’t think that is going to happen until Pete Rose passes,’’ Wallach said.

Eventually, Wallach believes Jackson will be inducted into the Hall of Fame.

With baseball being so united with gambling now Jackson and Rose should both be in the Hall of Fame.

Imagine what that partnership will be like in 10 years. Wallach joked that it could be “The National Baseball Hall of Fame, presented by Draft Kings.’’

It just might be; every game seems to be united with betting sites as is MLB Network.

There is so much to the game of baseball and its history and Wallach has a wonderful podcast called “My Baseball History.”

“It’s a long form interview podcast so every episode I talk to somebody different who has some association to the game,’’ Wallach explained. “They could be a historian, an author, former players, front office people, a good mix of interesting people who all have unique stories, people who really make up the game. You can follow us on social media @shoelesspodcast and shoelesspodcast.com.’’

And as “Field of Dreams’’ showed us, there are many ways to tell a baseball story.

Put It In The Books